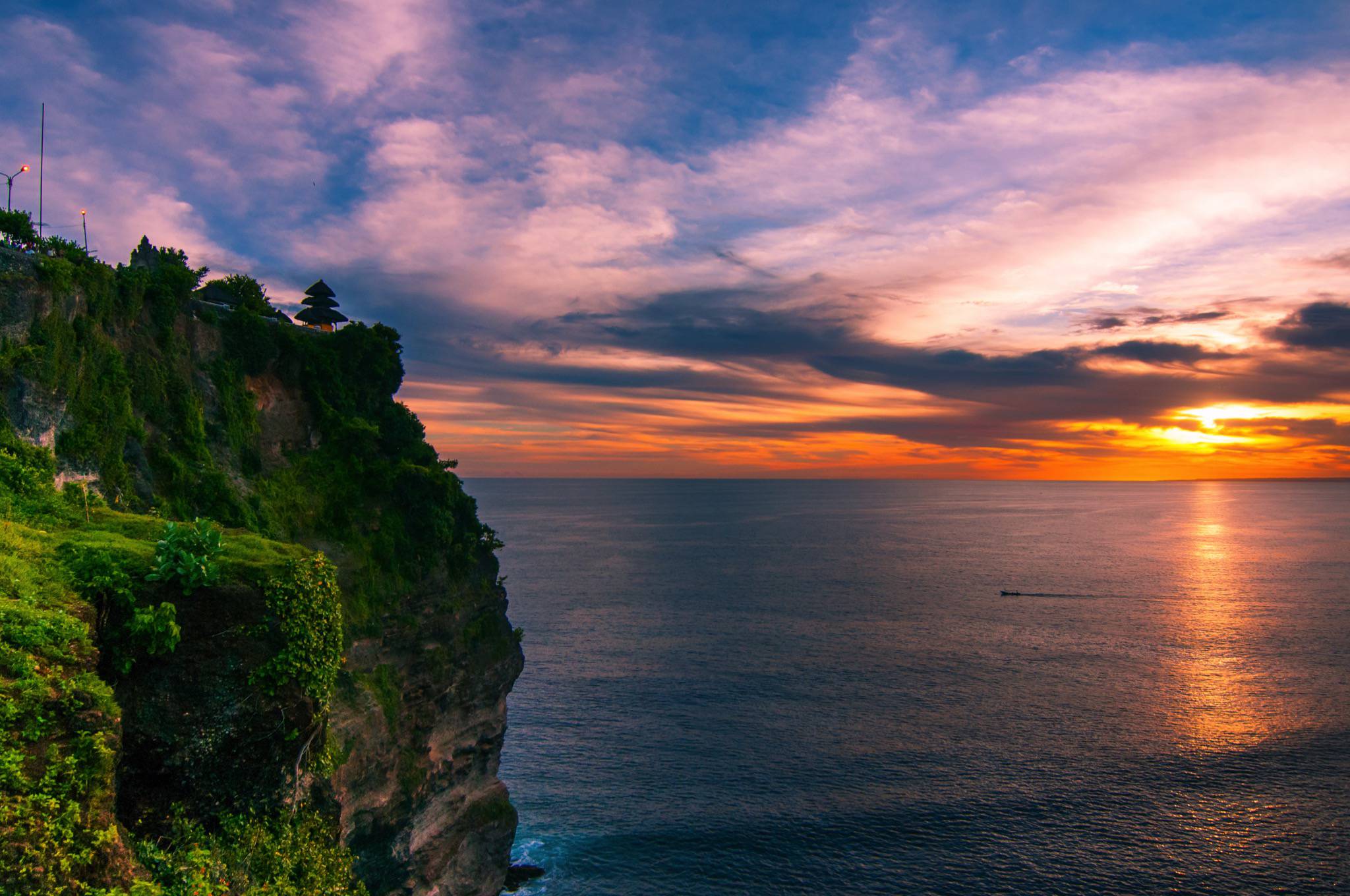 Uluwatu is a place on the south-western tip of the Bukit Peninsula of Bali, Indonesia. It is home to the Pura Luhur Uluwatu Temple and is the number four surf destination in the world for surfers of all abilities.

Geography
Visible in the Bukit Peninsula are layers of tertiary limestone resulting from the tectonic subduction of the Indo-Australian Plate under the Eurasian Plate, bringing it above sea level. Uluwatu borders the Indian Ocean to the south.

Breaks of the Wave
Starting from the top of the series of wave breaks to the bottom, the wave is composed of five breaks: The Bombie, Temple, Outside Corner, Racetracks, and The Peak.

Bombie
Bombie is the first of the five breaks in the Uluwatu series, located on the outer reef. Well known for breaking boards and snapping leashes, Bombie is an extremely powerful wave. On bigger swell days the wave can reach up to 20 feet. With fairly consistent surf year round, the best time is from May to October. This is the dry season with southeast winds. The typical surf arises from groundswells, coming in with a southwest swell direction. Bombie has a left breaking reef.

Temples
Temples received its name for being the closest wave to the Uluwatu Temple. It is the second wave break in the series. Mid to high tide is the perfect time for temple, with it being a hollow and long wave. This wave is recognized by the heavy amount of swell it receives. It is not a highly populated wave by surfers because it takes more effort to get out to it.

Outside Corner
Next in line is Outside corner, making this the other outer reef portion of Uluwatu. Outside corner is next in line to The Peak and Racetrack, connecting them as swells pick up. During low tide, experiencing breaks can be expected on the biggest swells, but not before reaching 6 feet. Some of the waves during this time will build up, reaching 15 feet. This makes for a ride that covers approximately 300 yards (270 m).

The Peak
Last in the series of break, the Peak is found. It is located right at the base of the cave, making this the entry and exit point of Uluwatu. The Peak operates well at every tide stage. Coming in best at high tide this wave makes for many hallow barreling waves. Unlike high tide, low tide at the Peak is known for closing out. The peak has a reef break. Winds from the southeast make the most ideal waves. It is key to have a board the size of 6’8-7’4 while surfing this wave.

Swells
Due to deep-water channels on both sides of the Bukit Peninsula, swells are mainly found there. Strong currents make for larger swells at low tide. During these lower tides and large swells, the Peak, Racetracks, and Temples are all under white water, and Bombie and Outside Corner take the swells, creating 15 feet (4.6 m) waves. At high tide, small swells will be more prevalent, creating barrels.

Transportation
The closest airport to Uluwatu is Ngurah Rai International Airport in Denpasar. The airport is 21 miles (34 km) north from Uluwatu. There are 41 airlines that depart out of the airport, and the airport offers nonstop flights to 50 cities every week. There is a minimum of 966 domestic flights and 889 international flights per week departing from it.

Surfers Blessings
The Pura Luhur Uluwatu temple is one of nine directional temples of Bali, found 70 metres (230 ft) up at the top of the rock at the southwest most point of the peninsula. Locals on the island believe that Gods have blessed the surfers who surf the Uluwatu wave, because of how divine and perfect the waves there are. The temple is known to protect Bali against evil. 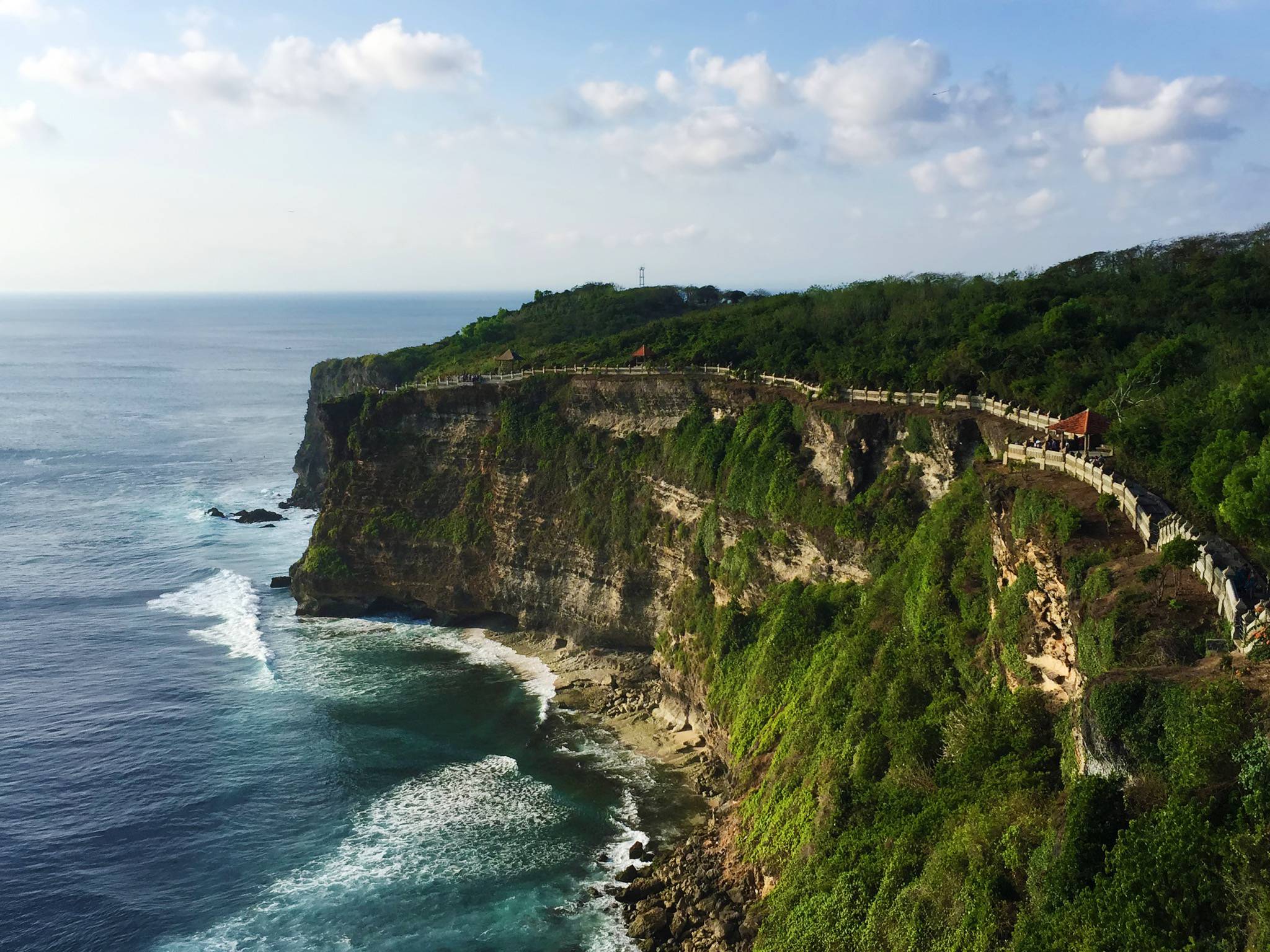