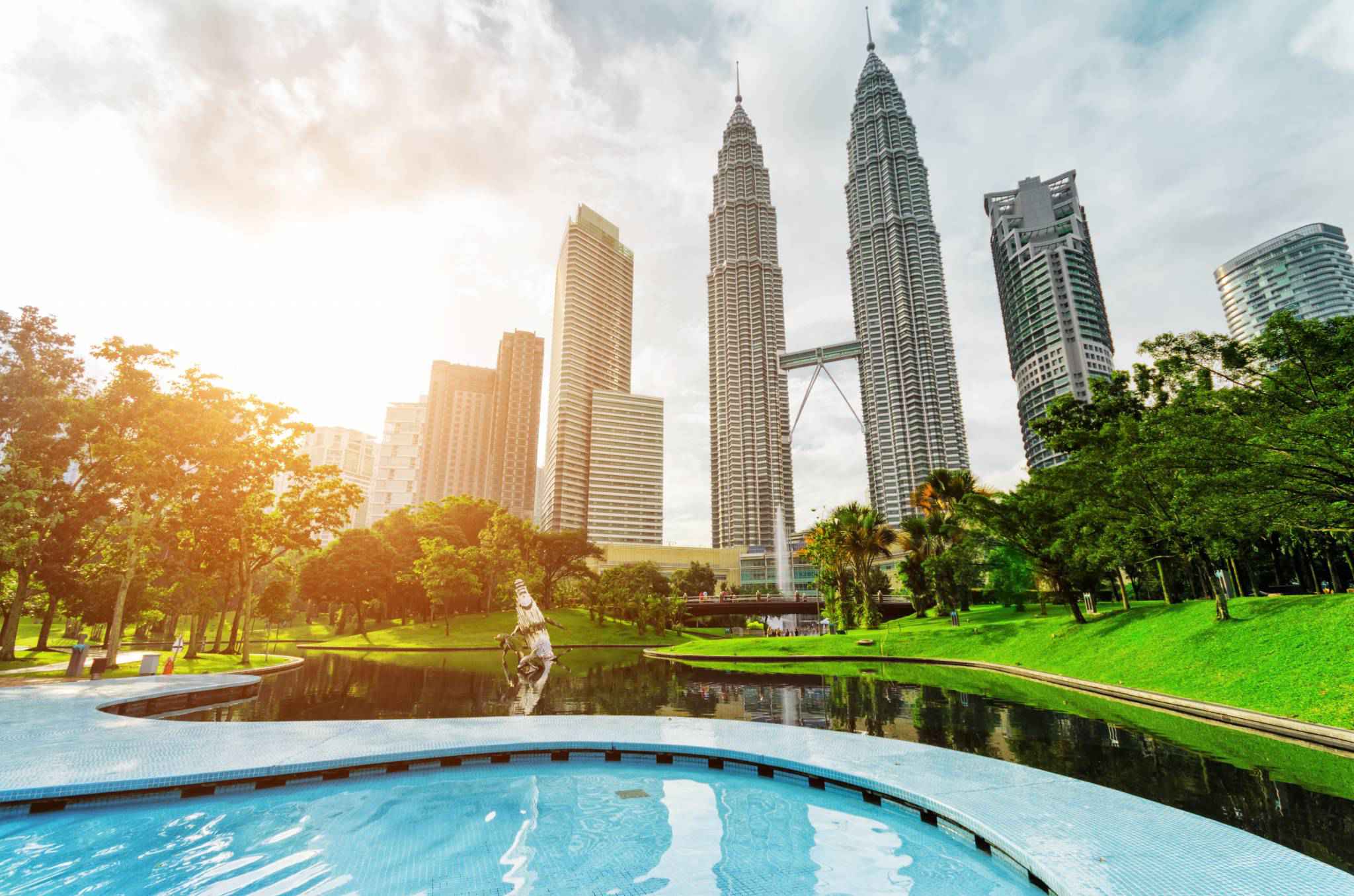 Skybridge
The towers feature a double decker skybridge connecting the two towers on the 41st and 42nd floors, which is the highest 2-story bridge in the world. It is not attached to the main structure, but is instead designed to slide in and out of the towers to prevent it from breaking, as the towers sway several feet in towards and away from each other during high winds. It also provides some structural support to the towers in these occasions. The bridge is 170 m (558 ft) above the ground and 58.4 m (192 ft) long, weighing 750 tons. The same floor is also known as the podium, since visitors going to higher levels have to change elevators here. The skybridge is open to all visitors, but tickets are limited to about 1000 people per day, and must be obtained on a first-come, first-served basis. Initially, the visit was free but in 2010, the tickets started being sold by Petronas. Visitors can choose to opt for package one which is just a visit to the skybridge or go for package two to go to the skybridge and all the way to level 86. Visitors are only allowed on the 41st floor as the 42nd floor can only be used by the tenants of the building.

The skybridge also acts as a safety device, so that in the event of a fire or other emergency in one tower, tenants can evacuate by crossing the skybridge to the other tower. The total evacuation triggered by a bomb hoax on 12 September 2001 (the day after the September 11 attacks destroyed the twin towers of the World Trade Center in New York City) showed that the bridge would not be useful if both towers need to be emptied simultaneously, as the capacity of the staircases was insufficient for such an event. Plans thus call for the lifts to be used if both towers need to be evacuated, and a successful drill following the revised plan was conducted in 2005.
There is a two hinged arch that supports the skybridge with arch legs, each 51 metres (167 ft) long, that are bolted to level 29 of each of the towers. After being constructed on the ground, the skybridge was lifted into place on the towers over a period of three days in July 1995. Instead of being directly connected to the towers, the skybridge can shift or slide in and out of them to counterbalance any effect from the wind. Residing on the 41st and 42nd floors, the skybridge connects a conference room, an executive dining room and a prayer room.

Lift system
The main bank of Otis Lifts is located in the centre of each tower. All main lifts are double-decker with the lower deck of the lift taking passengers to even-numbered floors and upper deck to odd-numbered floors. To reach an odd-numbered floor from ground level, passengers must take an escalator to the upper deck of the lift.
There are 29 double-deck passenger elevators, but there are different sets that service certain floors of the towers, specifically two sets of six of these double-deck passenger elevators to floors 1–23 and 1–37 respectively. Another set of 5 passenger lifts transport passengers to the 41st and 42nd floors where they can switch lifts to reach the upper zones of the buildings, each double-deck passenger lift with the capacity of 52 passengers or, 26 passengers per deck. There are also 6 heavy-duty elevators for utility.
From the ground floor, there are three groups of lifts. The "short haul" group of 6 lifts take passengers to floors between level 2/3 and level 16/17. The "mid haul" group of six lifts take passengers to floors between level 18/19 and level 37/38. There is also a set of shuttle lifts that take passengers directly to levels 41/42. To get to levels above 41/42, passengers must take the shuttle lifts, then change to lifts to the upper floors. These connecting lifts are directly above the lifts that serve levels 2 to 38. The pattern now repeats with the upper levels, one set serving levels 43/44 to 57/58 and one set serving levels 59/60 to levels 73/74.

Apart from this main bank of lifts, there are a series of "connecting" lifts to take people between the groups. Unlike the main lifts, these are not the double-decker type. Two lifts are provided to take people from levels 37/38 to levels 41/42 (levels 39 and 40 are not accessible as office space). This spares someone in the lower half of the building from having to go back to the ground floor to go to the upper half of the building.

The lifts contain a number of safety features. It is possible to evacuate people from a lift stuck between floors by manually driving one of the adjacent lifts next to it and opening a panel in the wall. It is then possible for people in the stuck lift to walk between lift cars. During an evacuation of the buildings, only the shuttle lift is allowed to be used, as there are only doors at levels G/1 and levels 41/42; therefore should there be a fire in the lower half of the building, this enclosed shaft would remain unaffected. Firefighter lifts are also provided in case of emergency.

Ticketing system
In order to visit Petronas towers, visitors must first purchase the tickets. Tickets of adults and children can be purchased via online web portal or at the counter. Discounted tickets for seniors are available for those 55 years of age and above. Queues for tickets can get quite long sometimes. The complete Ticketing System or Automated Fare Collection system is provided by a Malaysian-based solution company called Longbow Technologies Sdn Bhd. 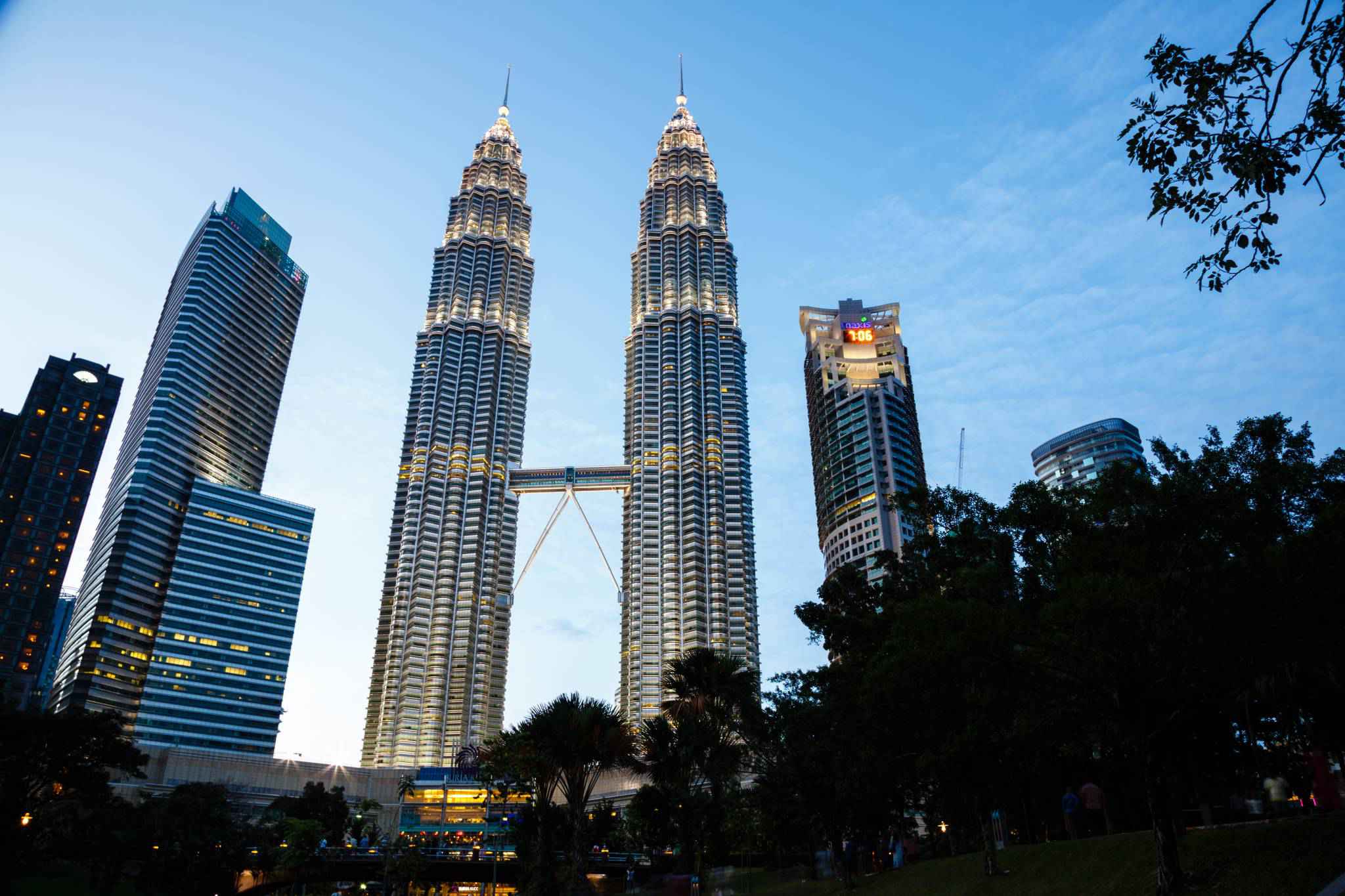