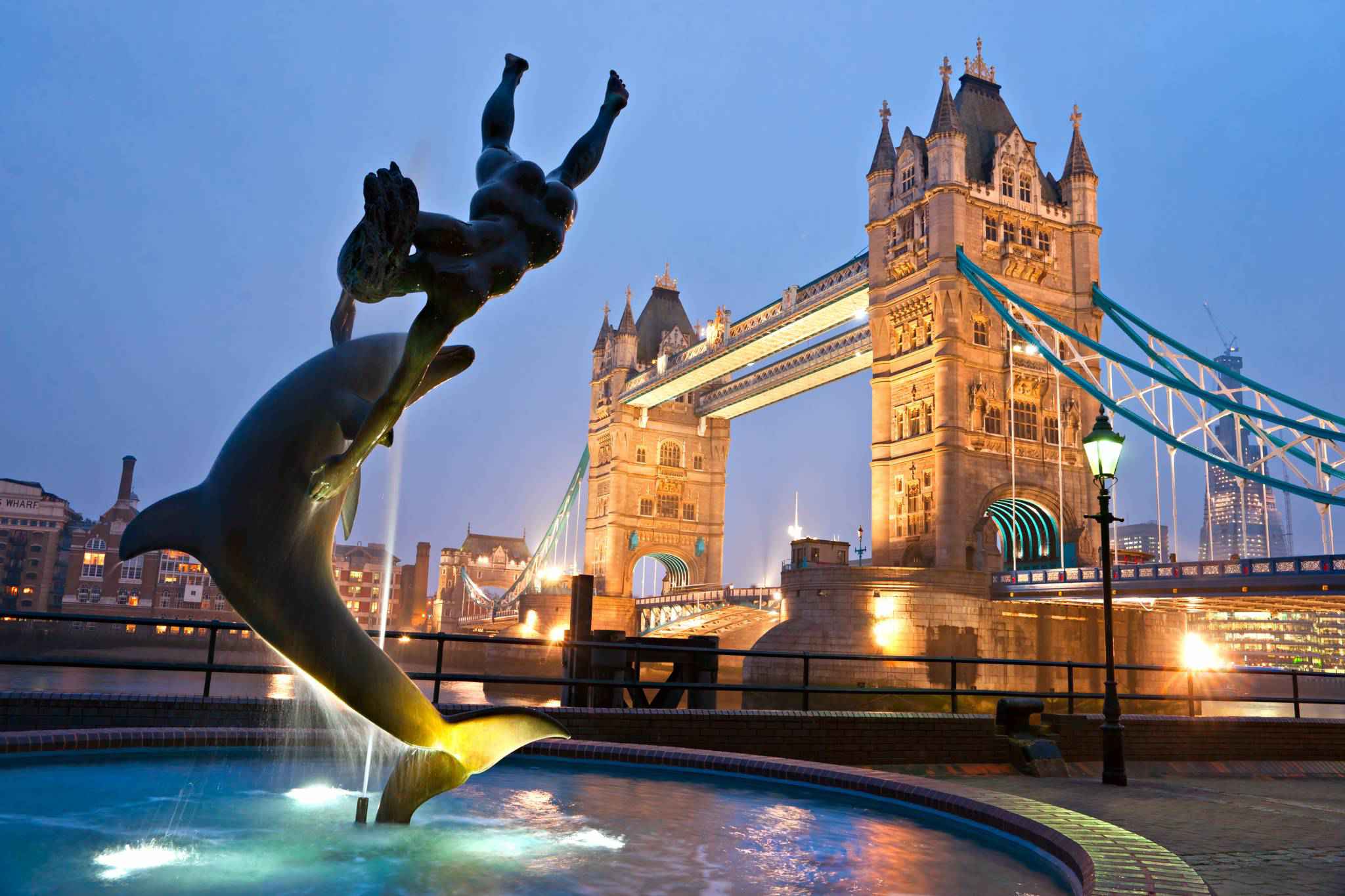 Tower Bridge is a combined bascule and suspension bridge in London built in 1886–1894. The bridge crosses the River Thames close to the Tower of London and has become an iconic symbol of London. Tower Bridge is one of five London bridges now owned and maintained by the Bridge House Estates, a charitable trust overseen by the City of London Corporation. It is the only one of the Trust's bridges not to connect the City of London directly to the Southwark bank, as its northern landfall is in Tower Hamlets.
The bridge consists of two bridge towers tied together at the upper level by two horizontal walkways, designed to withstand the horizontal tension forces exerted by the suspended sections of the bridge on the landward sides of the towers. The vertical components of the forces in the suspended sections and the vertical reactions of the two walkways are carried by the two robust towers. The bascule pivots and operating machinery are housed in the base of each tower. The bridge's present colour scheme dates from 1977, when it was painted red, white and blue for Queen Elizabeth II's Silver Jubilee.

The bridge deck is freely accessible to both vehicles and pedestrians, whereas the bridge's twin towers, high-level walkways and Victorian engine rooms form part of the Tower Bridge Exhibition, for which an admission charge is made. The nearest London Underground tube stations are Tower Hill on the Circle and District lines, London Bridge on the Jubilee and Northern lines and Bermondsey on the Jubilee line, and the nearest Docklands Light Railway station is Tower Gateway. The nearest National Rail stations are at Fenchurch Street and London Bridge.

Bridge structure
The bridge is 800 feet (240 metres) in length with two towers each 213 feet (65 metres) high, built on piers. The central span of 200 feet (61 metres) between the towers is split into two equal bascules or leaves, which can be raised to an angle of 86 degrees to allow river traffic to pass. The bascules, weighing over 1,000 tons each, are counterbalanced to minimise the force required and allow raising in five minutes.

The two side-spans are suspension bridges, each 270 feet (82 m) long, with the suspension rods anchored both at the abutments and through rods contained within the bridge's upper walkways. The pedestrian walkways are 143 feet (44 m) above the river at high tide.

The main bridge deck carries two lanes of road traffic between two low-level pedestrian walkways across both suspension spans and the opening bascule section of the bridge, with the walkways separated from the roadway by fences. The roadway passes through each of the two towers, whereas the low-level walkways pass around the outside of the towers.

One of the chimneys on the bridge, which are often confused as lamp posts, connects up to an old fireplace in a guardroom of the Tower of London. It is long-disused.

The exhibition charges an admission fee. Entrance is from the west side of the bridge deck to the northern tower, from where visitors ascend to level 4 by lift before crossing the high-level walkways to the southern tower. In the towers and walkways is an exhibition on the history of the bridge. The walkways also provide views over the city, the Tower of London and the Pool of London, and include a glass-floored section. From the south tower, visitors can visit the engine rooms, with the original steam engines, which are situated in a separate building beside the southern approach to the bridge. 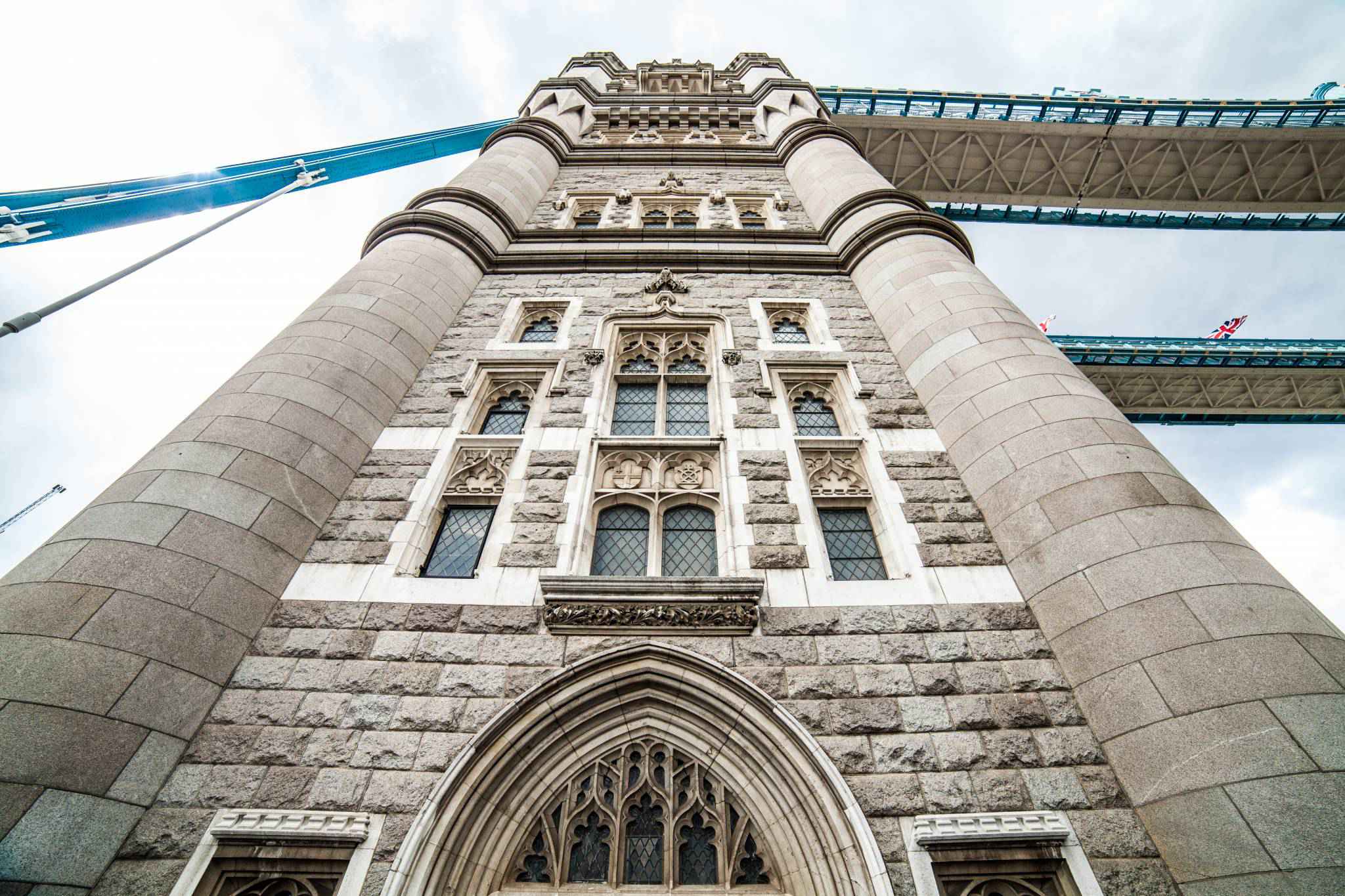