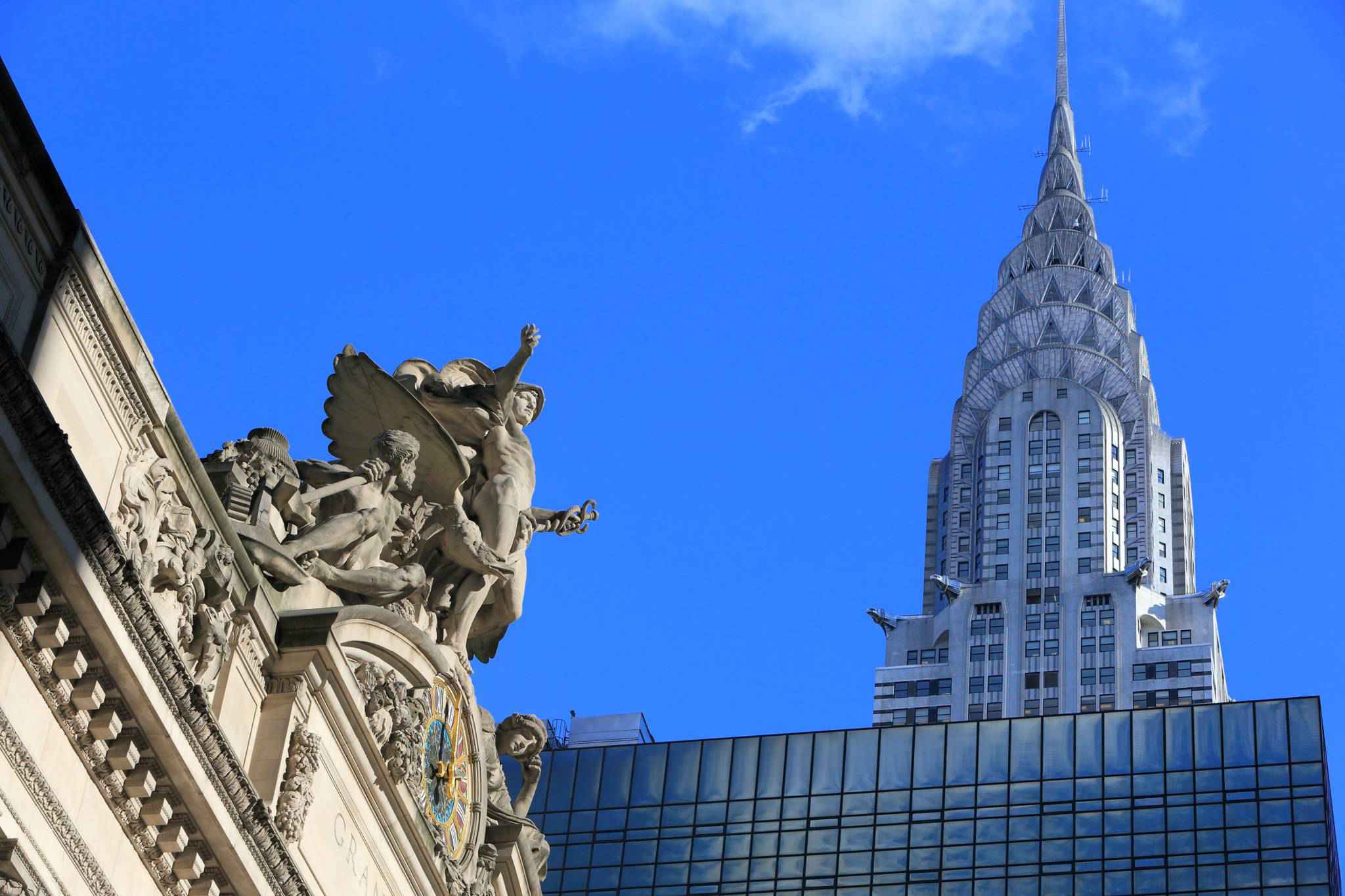 The Chrysler Building is an Art Deco-style skyscraper located on the East Side of Midtown Manhattan in New York City, at the intersection of 42nd Street and Lexington Avenue in the Turtle Bay neighborhood. At 1,046 feet , the structure was the world's tallest building for 11 months before it was surpassed by the Empire State Building in 1931.
It is the tallest brick building in the world, albeit with a steel frame. After the destruction of the World Trade Center, it was again the second-tallest building in New York City until December 2007, when the spire was raised on the 1,200-foot (365.8 m) Bank of America Tower, pushing the Chrysler Building into third position. In addition, The New York Times Building, which opened in 2007, is exactly level with the Chrysler Building in height. Both buildings were then pushed into fourth position, when the under-construction One World Trade Center surpassed their height, and then to fifth position by 432 Park Avenue which was completed in 2015.

The Chrysler Building is a classic example of Art Deco architecture and considered by many contemporary architects to be one of the finest buildings in New York City. In 2007, it was ranked ninth on the List of America's Favorite Architecture by the American Institute of Architects. It was the headquarters of the Chrysler Corporation from 1930 until the mid-1950s. Although the building was built and designed specifically for the car manufacturer, the corporation did not pay for the construction of it and never owned it, as Walter P. Chrysler decided to pay for it himself, so that his children could inherit it.

Architecture
The Chrysler Building is considered a leading example of Art Deco architecture. The corners of the 61st floor are graced with eagles; on the 31st floor, the corner ornamentation are replicas of the 1929 Chrysler radiator caps. The building is constructed of masonry, with a steel frame, and metal cladding. The building currently contains a total of 3,862 windows on its facades. Inside, there are four banks of 8 elevators designed by the Otis Elevator Corporation. The building was declared a National Historic Landmark in 1976, and a New York City Landmark in 1978.

The Chrysler Building is also renowned and recognized for its terraced crown. Composed of seven radiating terraced arches, Van Alen's design of the crown is a cruciform groin vault constructed into seven concentric members with transitioning setbacks, mounted up one behind another. The stainless-steel cladding is ribbed and riveted in a radiating sunburst pattern with many triangular vaulted windows, transitioning into smaller segments of the seven narrow setbacks of the facade of the terraced crown. The entire crown is clad with silvery "Enduro KA-2" metal, an austenitic stainless steel developed in Germany by Krupp and marketed under the trade name "Nirosta" (a German acronym for nichtrostender Stahl, meaning "non-rusting steel").

There are two sets of lighting in the top spires and decoration. The first are the V-shaped lighting inserts in the steel of the building itself. Added later were groups of floodlights that are on mast arms directed back at the building. This allows the top of the building to be lit in many colors for special occasions.