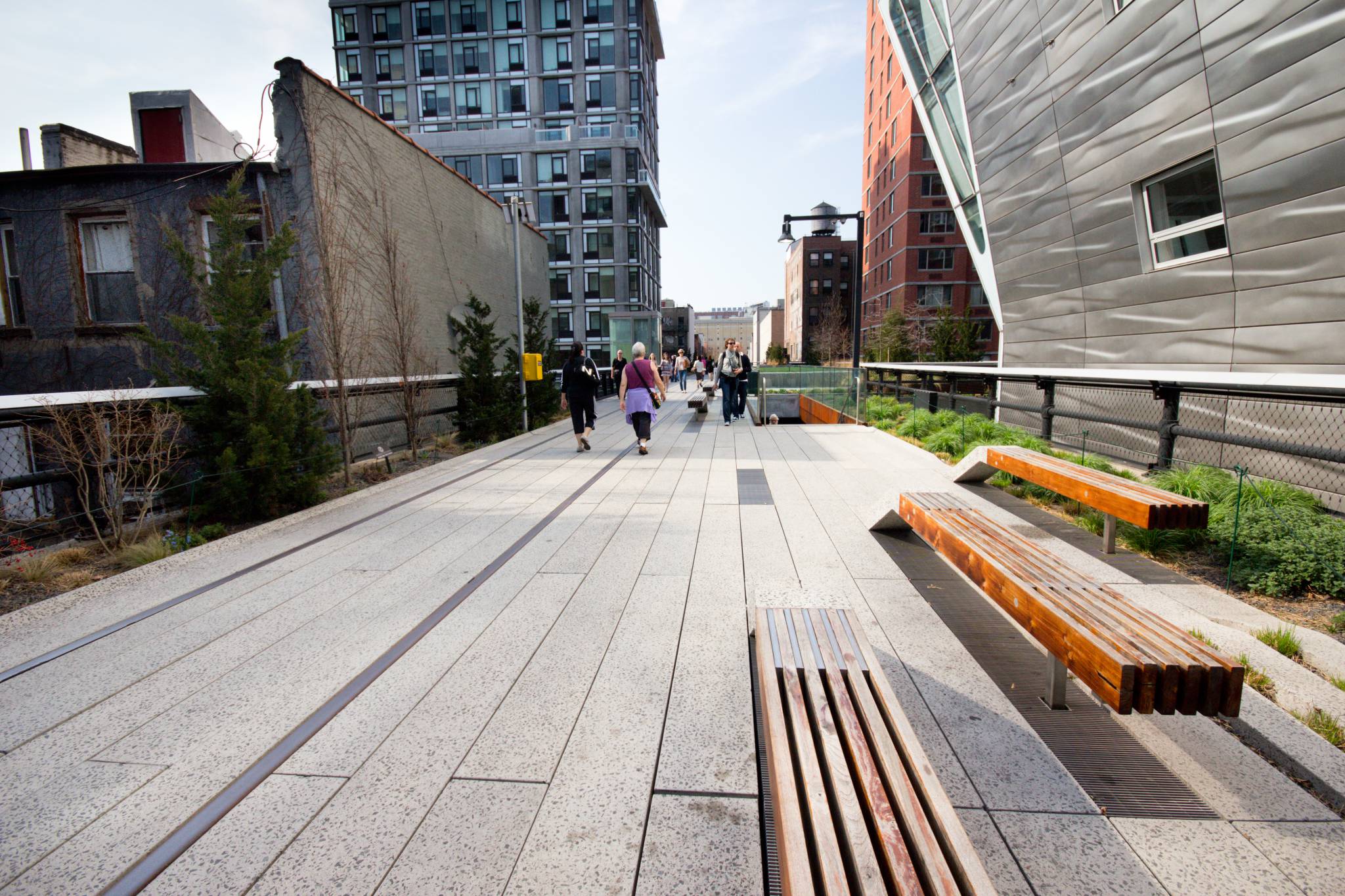 
The High Line is a 1.45-mile-long (2.33 km) elevated linear park, greenway and rail trail created on a former New York Central Railroad spur on the west side of Manhattan in New York City. The High Line’s design is a collaboration between James Corner Field Operations (Project Lead), Diller Scofidio + Renfro, and Piet Oudolf. The abandoned spur has been redesigned as a "living system" drawing from multiple disciplines which include landscape architecture, urban design, and ecology. Since opening in 2009, the High Line has become an icon of contemporary landscape architecture.

The park is built on a disused, southern viaduct section of the New York Central Railroad line known as the West Side Line. Originating in the Lower West Side of Manhattan, the park runs from Gansevoort Street – three blocks below 14th Street, in the Meatpacking District – through Chelsea to the northern edge of the West Side Yard on 34th Street near the Javits Center. The West Side Line formerly extended south to a railroad terminal at Spring Street, just north of Canal Street, and north to 35th Street at the site of the Javits Center. Most of the viaduct's southern section was demolished in 1960, and the section north of 34th Street was demolished and reconfigured in 1981. Another small portion was demolished in 1991. The High Line was inspired by the 3-mile-long (4.8 km) Promenade plantée (tree-lined walkway), a similar project in Paris which was completed in 1993.

The park is open daily from 7 a.m. to 7 p.m. in winter, until 10 p.m. in spring and fall, and until 11 p.m. in summer (except for the Interim Walkway west of 11th Avenue, which is open until dusk). It can be reached through eleven entrances, five of which are accessible to people with disabilities. The wheelchair-accessible entrances, each with stairs and an elevator, are at Gansevoort, 14th, 16th, 23rd, and 30th Streets. Additional staircase-only entrances are located at 18th, 20th, 26th, and 28th Streets, and 11th Avenue. Street-level access is available at 34th Street via the Interim Walkway, which runs from 30th Street and 11th Avenue to 34th Street west of 11th Avenue.

Attractions
The park's attractions include naturalized plantings, inspired by plants which grew on the disused tracks, and views of the city and the Hudson River. The pebble-dash concrete walkways swell and constrict, swing from side to side, and divide into concrete tines which meld the hardscape with plantings embedded in railroad-gravel mulch. "By opening the paving, we allow the plants to bleed through," said landscape architect James Corner, "almost as if the plants were colonizing the paved areas. There's a sort of blending or bleeding or suturing between the hard paving, the surface for people to stroll on, and the planting ... " Stretches of track and ties recall the High Line's former use, and portions of track are re-used for rolling lounges positioned for river views. The 120-species plant palette, curated by Dutch landscape architect Piet Oudolf, includes sturdy meadow plants (such as clump-forming grasses, liatris, and coneflowers) and scattered stands of sumac and smokebush and is not limited to native plants. At the Gansevoort Street end, a grove of mixed species of birch provides shade by late afternoon. Ipê timber for the built-in benches came from a managed forest certified by the Forest Stewardship Council to ensure sustainability and the conservation of biological diversity, water resources, and fragile ecosystems. According to James Corner Field Operations, the High Line's design "is characterized by an intimate choreography of movement."

The High Line also has cultural attractions as part of a long-term plan for the park to host temporary installations and performances. Creative Time, Friends of the High Line, and the New York City Department of Parks and Recreation commissioned The River That Flows Both Ways by Spencer Finch as the inaugural art installation. The work is integrated into the window bays of the former Nabisco factory loading dock as a series of 700 purple and gray glass panes. Each color is calibrated to match the center pixel of 700 digital pictures (one taken every minute) of the Hudson River, making up an extended portrait of the river. Creative Time worked with Finch to realize his site-specific concept after he saw the rusted, disused mullions of the old factory, with metal-and-glass specialists Jaroff Design helping to prepare and reinstall. 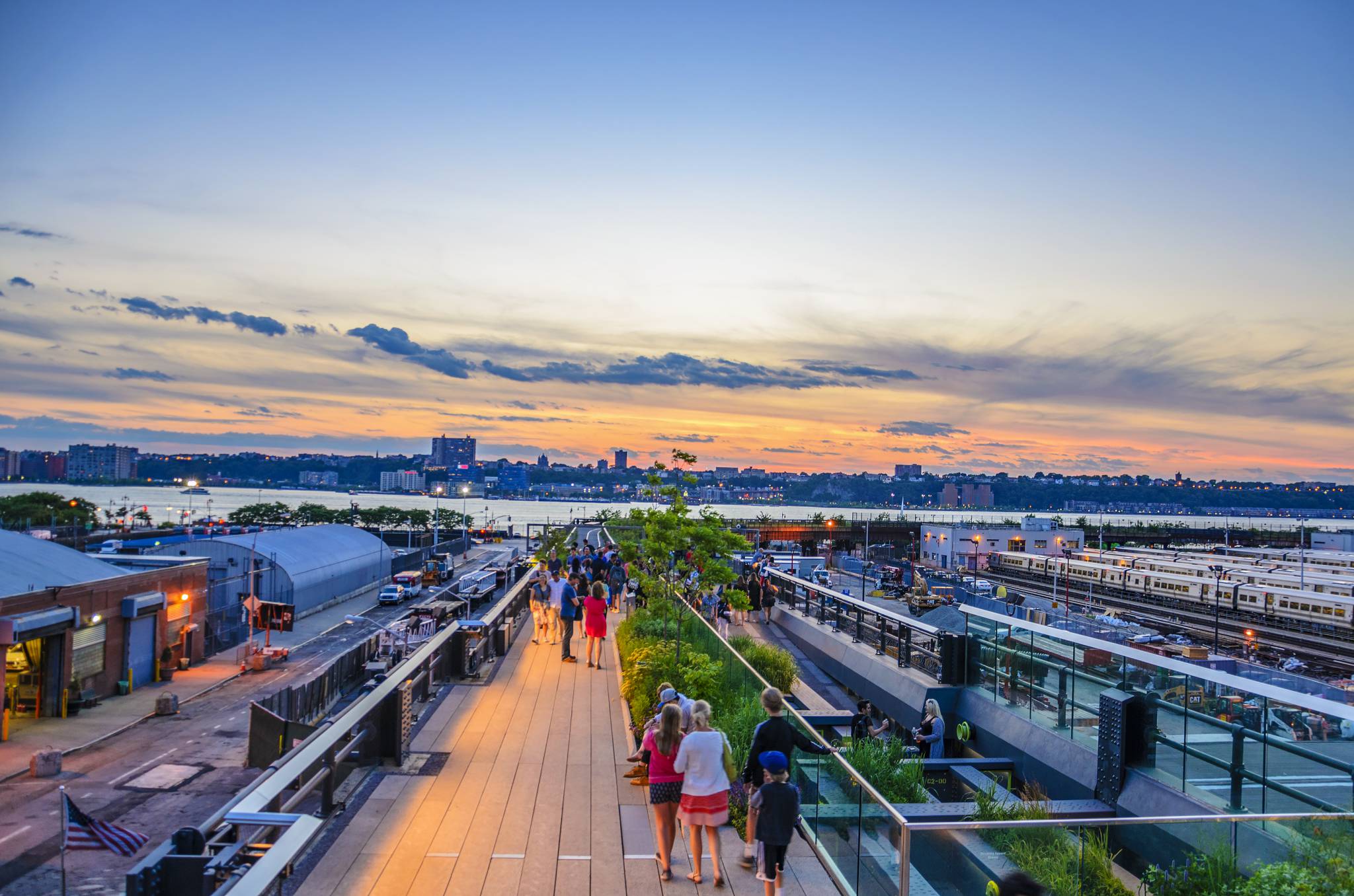