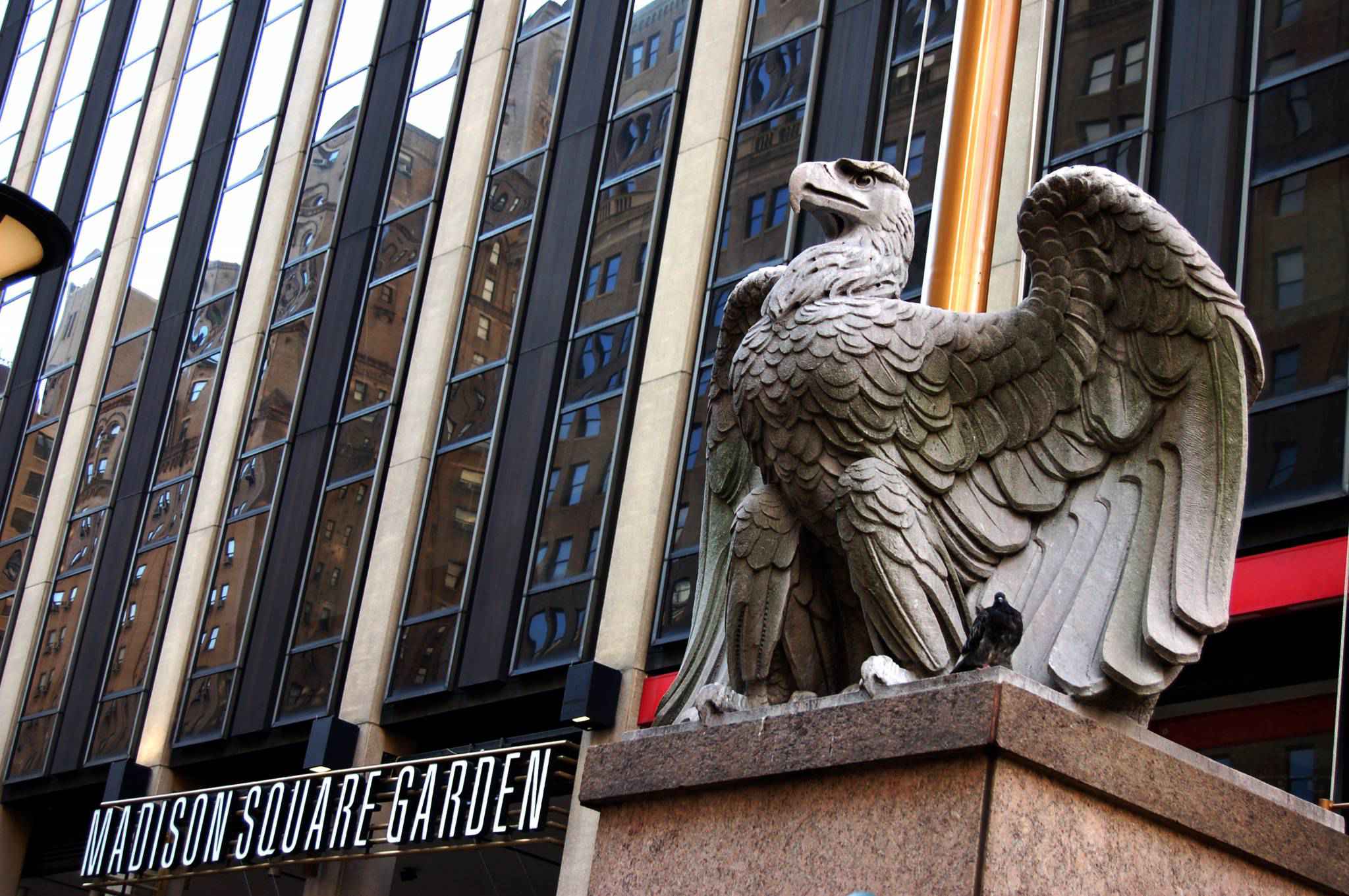 Madison Square Garden is a multi-purpose indoor arena in the New York City borough of Manhattan. Located in Midtown Manhattan between 7th and 8th Avenues from 31st to 33rd Streets, it is situated atop Pennsylvania Station. It is the fourth venue to bear the name "Madison Square Garden", the first two (1879 and 1890) of which were located on Madison Square, on East 26th Street and Madison Avenue, with the third Madison Square Garden further uptown at Eighth Avenue and 50th Street. The Garden is used for professional basketball and ice hockey, as well as boxing, concerts, ice shows, circuses, professional wrestling and other forms of sports and entertainment. It is close to other midtown Manhattan landmarks, including the Empire State Building, Koreatown, and Macy's at Herald Square. It is home to the New York Rangers of the National Hockey League, the New York Knicks of the National Basketball Association, and residency to singer-songwriter Billy Joel.

The Garden opened on February 11, 1968, and is the oldest major sporting facility in the New York metropolitan area. It is the oldest arena in the National Hockey League and the second-oldest arena in the National Basketball Association. MSG is the fourth-busiest music arena in the world in terms of ticket sales, behind The O2 Arena, the Manchester Arena and The SSE Hydro in the United Kingdom. At a total construction cost of approximately $1.1 billion, MSG has been ranked as one of the 10 most expensive stadium venues ever built. It is part of the Pennsylvania Plaza office and retail complex. Several other operating entities related to the Garden share its name.

Current Garden
On February 11, 1968, the fourth and current Madison Square Garden opened after Irving M. Felt, who purchased the air rights from the Pennsylvania Railroad, tore down the above-ground portions of the original Pennsylvania Station. The new structure was one of the first of its kind to be built above the platforms of an active railroad station. It was an engineering feat constructed by Robert E. McKee of El Paso, Texas. Public outcry over the demolition of the Pennsylvania Station structure—an outstanding example of Beaux-Arts architecture—led to the creation of the New York City Landmarks Preservation Commission. The Garden is located in the office and entertainment complex formally addressed as Pennsylvania Plaza and commonly known as Penn Plaza, named for the railroad station.

In 1972, the Garden's chairman, Irving M. Felt, proposed moving the New York Knicks and Rangers to a then incomplete venue in the New Jersey Meadowlands: the Meadowlands Sports Complex. The Garden was also the home arena for the NY Raiders/NY Golden Blades of the World Hockey Association. The Meadowlands would eventually host its own NBA and NHL teams (the New Jersey Nets and the New Jersey Devils, respectively). The NFL's New York Giants and Jets also relocated there. Felt's efforts fueled controversy between the Garden and New York City over real estate taxes. The disagreement again flared in 1980 when the Garden again challenged its tax bill.
In 1991, Garden owners spent $200 million to renovate facilities and add 89 suites in place of hundreds of upper-tier seats. The project was designed by Ellerbe Becket. In 2004–2005, Cablevision battled with the City of New York over the proposed West Side Stadium, which was cancelled. Cablevision then announced plans to raze the Garden, replace it with high-rise commercial buildings, and build a new Garden one block away at the site of the James Farley Post Office. Meanwhile, a new project to renovate and modernize the Garden completed phase one in time for the Rangers and Knicks' 2011–12 seasons, though the vice president of the Garden says he remains committed to the installation of an extension of Penn Station at the Farley Post Office site. While the Knicks and Rangers were not displaced, the New York Liberty played at the Prudential Center in Newark, New Jersey during the renovation.