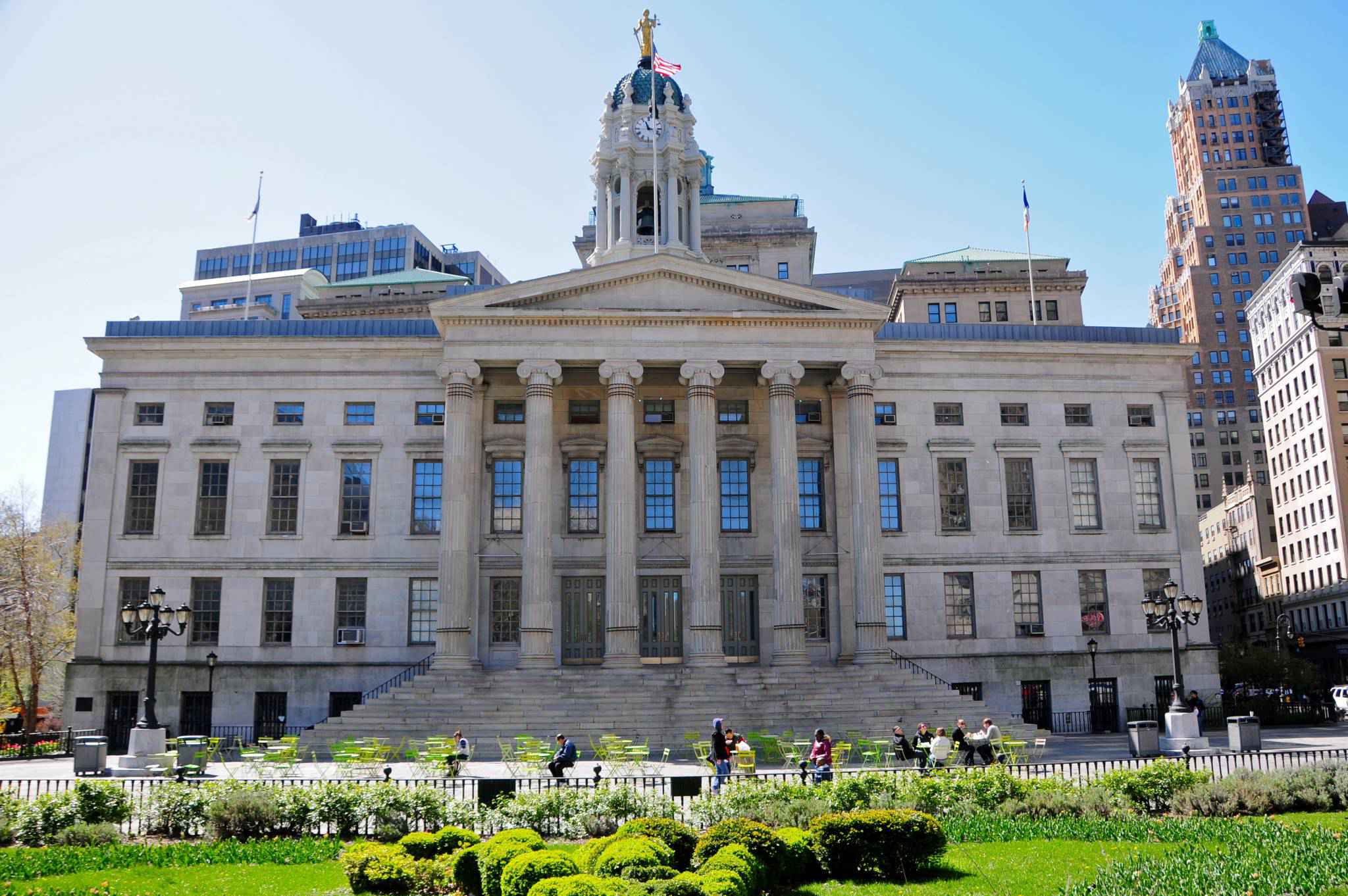 New York City Hall, the seat of New York City government, is located at the center of City Hall Park in the Civic Center area of Lower Manhattan, between Broadway, Park Row, and Chambers Street. The building is the oldest city hall in the United States that still houses its original governmental functions, such as the office of the Mayor of New York City and the chambers of the New York City Council. While the Mayor's Office is in the building, the staff of thirteen municipal agencies under mayoral control are located in the nearby Manhattan Municipal Building, one of the largest government buildings in the world.

Constructed from 1810 to 1812, New York City Hall is a National Historic Landmark and is listed on the National Register of Historic Places. Both its exterior and interior (1976) are designated New York City landmarks.

The cornerstone of the new City Hall was laid in 1803. Construction was delayed after the City Council objected that the design was too extravagant. In response, McComb and Mangin reduced the size of the building and used brownstone at the rear of the building to lower costs; the brownstone, along with the original deteriorated Massachusetts marble facade, quarried from Alford, Massachusetts, was replaced with Alabama limestone in 1954 to 1956. Labor disputes and an outbreak of yellow fever further slowed construction. The building was not dedicated until 1811, and opened officially in 1812.

The building's Governor's Room hosted President-elect Abraham Lincoln in 1861, and his coffin was placed on the staircase landing across the rotunda when he lay in state in 1865 after his assassination. Ulysses S. Grant also lay in state beneath the soaring rotunda dome as did Colonel Elmer Ephraim Ellsworth, first Union officer killed in the Civil War and commander of the 11th New York Volunteer Infantry Regiment (First Fire Zouaves). The Governor's Room, which is used for official receptions, also houses one of the most important collections of 19th century American portraiture and notable artifacts such as George Washington's desk.

The Outer Room is adjacent to the traditional Mayor's office, which is a small space on the northwest corner of the first floor. The Ceremonial Room is where the mayor would meet officials and hold small group meetings.

There are 108 paintings from the late 18th century through the 20th. The New York Times declared it "almost unrivaled as an ensemble, with several masterpieces." Among the collection is John Trumbull’s 1805 portrait of Alexander Hamilton, the source of the face on the United States ten-dollar bill. There were significant efforts to restore the paintings in the 1920s and 1940s. In 2006 a new restoration campaign began for 47 paintings identified by the Art Commission as highest in priority.
On July 23, 2003 at 2:08 p.m., City Hall was the scene of a rare political assassination. Othniel Askew, a political rival of City Councilman James E. Davis, opened fire with a pistol from the balcony of the City Council chamber. Askew shot Davis twice, fatally wounding him. A police officer on the floor of the chamber then fatally shot Askew. Askew and Davis had entered the building together without passing through a metal detector, a courtesy extended to elected officials and their guests. As a result of the security breach, then-Mayor Michael Bloomberg revised security policy to require that everyone entering the building pass through metal detectors without exception. 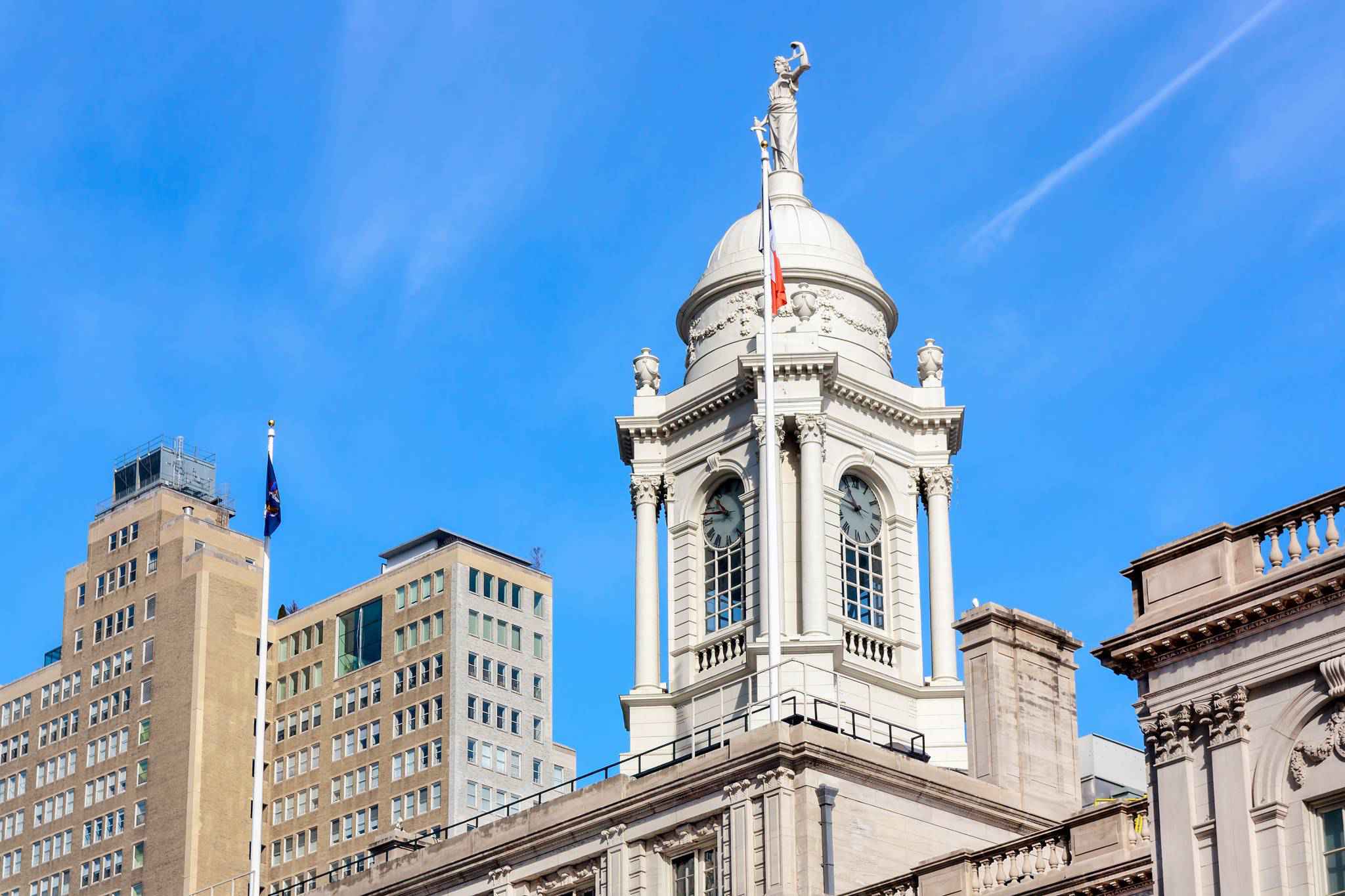