Radio City Music Hall is an entertainment venue located in Rockefeller Center in New York City. Its nickname is the Showplace of the Nation, and it was for a time the leading tourist destination in the city. Its interior was declared a city landmark in 1978.

The Music Hall opened to the public on December 27, 1932 with a lavish stage show featuring Ray Bolger, Doc Rockwell and Martha Graham. The opening was meant to be a return to high-class variety entertainment. The new format was not a success. The program was very long, and individual acts were lost in the cavernous hall. On January 11, 1933, the Music Hall converted to the then-familiar format of a feature film, with a spectacular stage show perfected by Rothafel at the Roxy Theatre in New York City. The first film shown on the giant screen was Frank Capra's The Bitter Tea of General Yen, starring Barbara Stanwyck, and the Music Hall became the premiere showcase for films from the RKO-Radio Studio. The film-plus-stage-spectacle format continued at the Music Hall until 1979, with four complete performances presented every day.

Radio City Music Hall is currently leased to and managed by The Madison Square Garden Company Movie premieres and feature runs have occasionally taken place there such as the Harry Potter film series, but the focus of the theater throughout the year is now on concerts and live stage shows. The Radio City Christmas Spectacular continues to be an important annual event (see below). The Music Hall has presented most of the leading pop and rock performers of the last 30 years, as well as televised events including the Grammy Awards, the Tony Awards, the Daytime Emmy Awards the MTV Video Music Awards, and the NFL Draft. Starting in 2013, however, the Tony Awards will be the only major televised awards ceremony at Radio City, as the Video Music Awards relocated permanently to the Barclays Center that year. (The Grammys which alternated between New York City and Hollywood, has been held since 2004 in Los Angeles, as have the Daytime Emmys, off and on, since 2006.)

Radio City has 5,933 seats for spectators, and additional seating can be placed on the pit elevator during events that do not require that space bringing the seating capacity to over 6,000; it became the largest movie theater in the world at the time of its opening.

Art
The public areas of the Music Hall feature the work of many depression era artists. The large mural in the grand foyer is entitled "Fountain of Youth" and was painted by Ezra Winter. The murals on the wall of the grand lounge are collectively known as the "Phantasmagoria of the Theater" by Louis Bouche. Three female nudes cast in aluminum were commissioned for the music hall, however Roxy Rothafel thought that they were inappropriate for a family venue. Although the Rockefellers loved the sculptures, the only one that was displayed on opening night was "Goose Girl" by Robert Laurent, which is currently on the first mezzanine. Since opening night the other two sculptures have been put on display at the music hall, "Eve" by Gwen Lux is currently displayed in the southwest corner of the grand foyer, and "Spirit of the Dance" by William Zorach is currently on display in the Grand lounge. Each of the Public restrooms have adjoining lounges that display various works of art. Stuart Davis, Witold Gordon, Edward "Buk" Ulrich, Henry Billings and Donald Deskey all have art displayed in these lounges. Georgia O'Keeffe was asked to paint a mural for the second mezzanine lady's lounge, however she never completed the mural. The reason for her withdrawal is subject to debate. 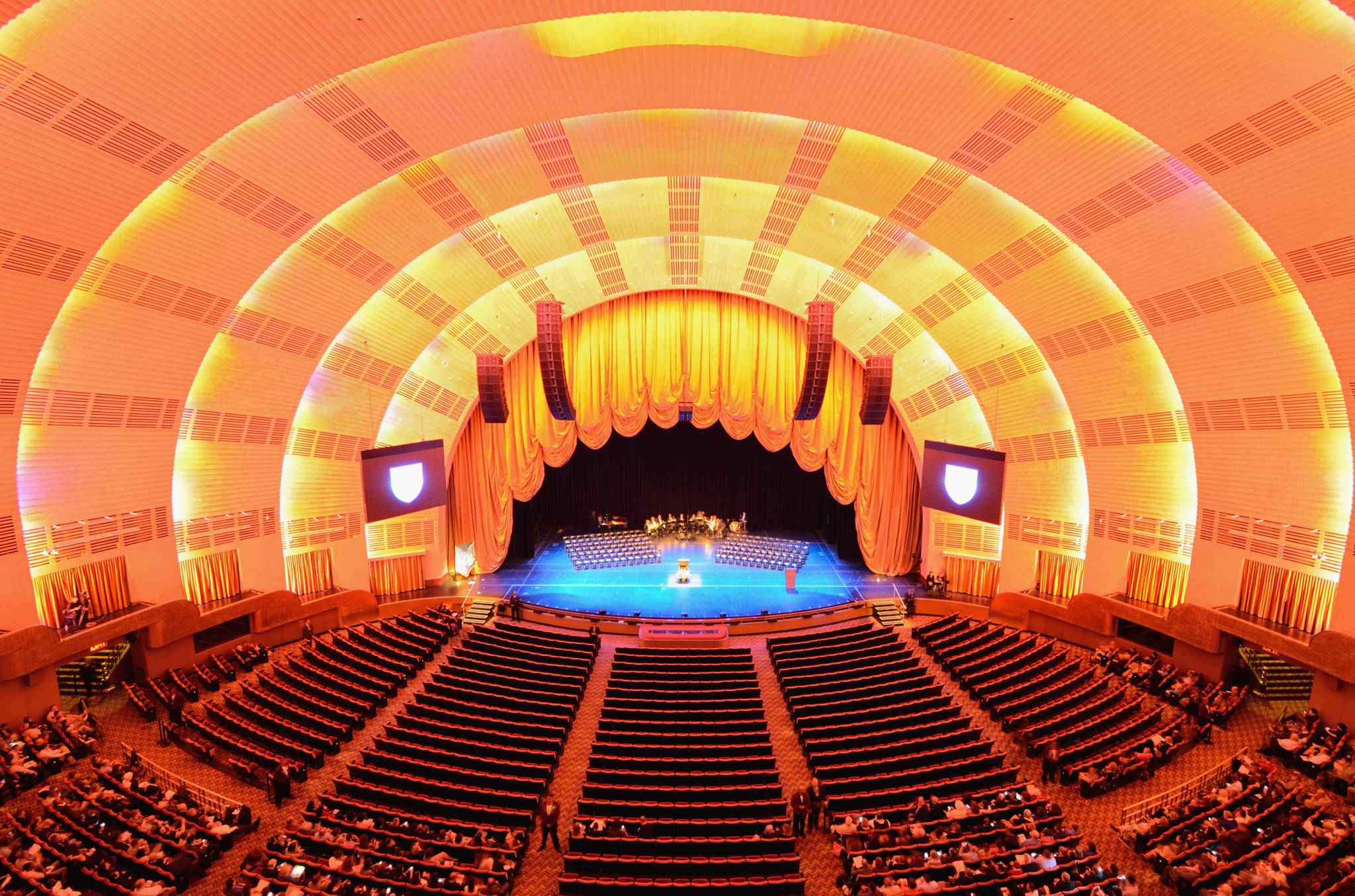