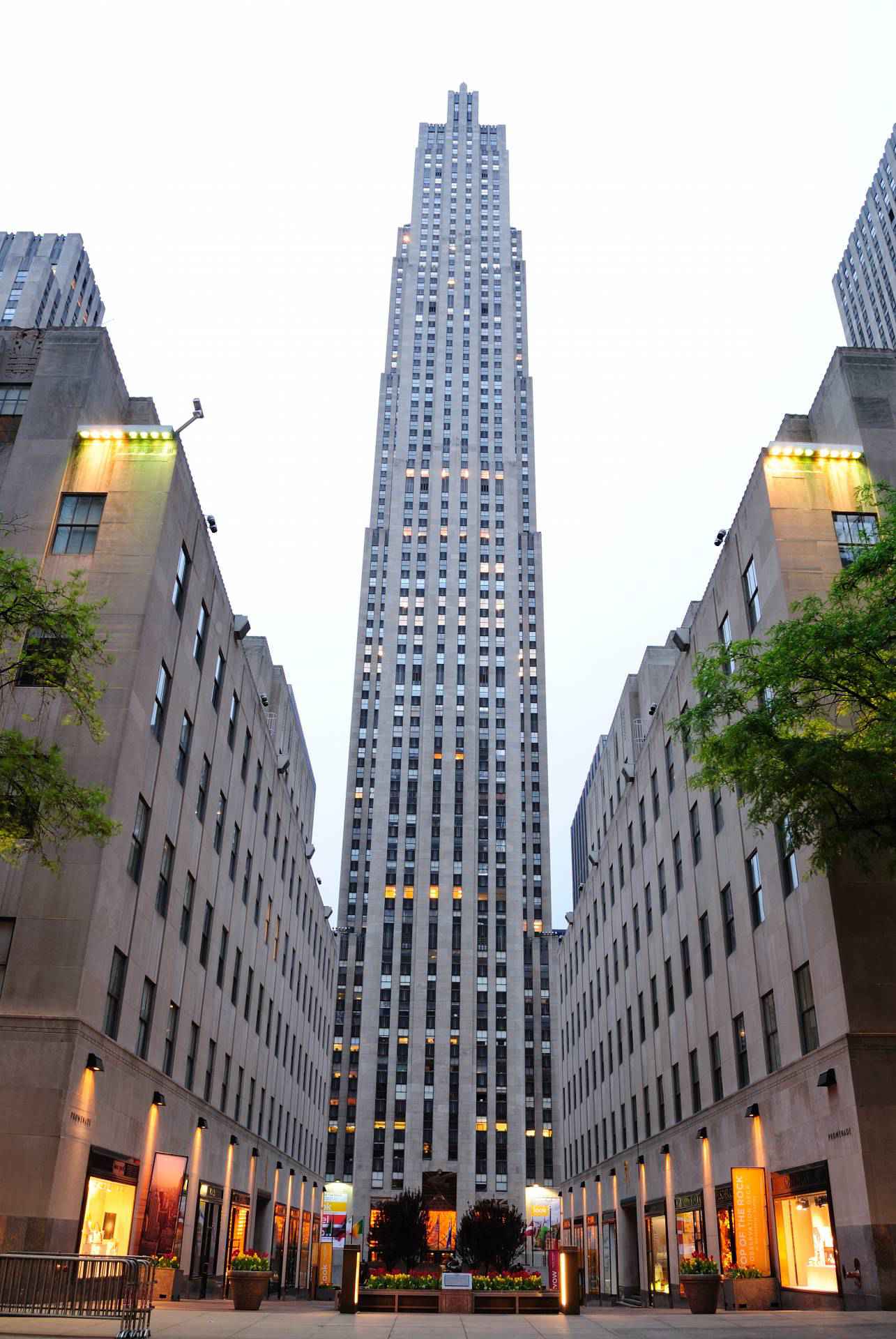 Rockefeller Center is a large complex consisting of 19 highrise commercial buildings covering 22 acres between 48th and 51st Streets in New York City. Commissioned by the Rockefeller family, it is located in the center of Midtown Manhattan, spanning the area between Fifth Avenue and Sixth Avenue. It was declared a National Historic Landmark in 1987.

It is famous for its annual Christmas tree lighting.

The current Center is a combination of two building complexes: the older and original 14 Art Deco office buildings from the 1930s, one building across 51st Street built in 1947, and a set of four International-style towers built along the west side of Avenue of the Americas during the 1960s and 1970s.

30 Rockefeller Plaza
The centerpiece of Rockefeller Center is the 70-floor, 872 ft (266 m)-tall building at 30 Rockefeller Center, centered behind the sunken plaza. It is alternatively known as the Comcast Building and 30 Rock (also the name of a comedy television show), and formerly known as the RCA Building and then the GE Building. The building is the setting for the famous Lunchtime atop a Skyscraper photograph, taken by Charles C. Ebbets in 1932 of construction workers sitting on a steel beam without safety harnesses eating lunch above an 840-foot (260 m) drop to the ground.

Radio City Music Hall
Radio City Music Hall, at 50th Street and Sixth Avenue, was completed in December 1932. At the time, it was promoted as the largest and most opulent theater in the world. Its original intended name was the "International Music Hall" but this was changed to reflect the name of its neighbor, "Radio City," as the new NBC Studios in the RCA Building were known. RCA was one of the complex's first and most important tenants and the entire Center itself was sometimes referred to as "Radio City."

In 1979, after decades as a premiere showcase for motion pictures and elaborate stage shows, the theater converted to presenting touring performers and special events. Each holiday season features the annual musical stage show, the Radio City Christmas Spectacular, a tradition for more than 70 years. The enormous stage, with its elevators and turntables, has also offered Frank Sinatra, Ella Fitzgerald, the Grammy and Tony Awards, and countless other events. One of New York's most popular tourist attractions, the Music Hall has been attended by more than 300 million people.

Underground concourse
A series of shop- and restaurant-filled, underground pedestrian passages stretch from 47th Street to 51st Street, and from Fifth Avenue to Seventh Avenue. Access is via lobby stairways in the six landmark buildings, through restaurants surrounding the Concourse-level skating rink, and elevators to the north and south of the rink. There is a connection to the New York City Subway via the western concourse, to 47th–50th Streets – Rockefeller Center station below Sixth Avenue (B D F M trains).

Center art
Rockefeller Center represents a turning point in the history of architectural sculpture: it is among the last major building projects in the United States to incorporate a program of integrated public art. Sculptor Lee Lawrie contributed the largest number of individual pieces – twelve, including the statue of Atlas facing Fifth Avenue and the conspicuous friezes above the main entrance to the Comcast Building. 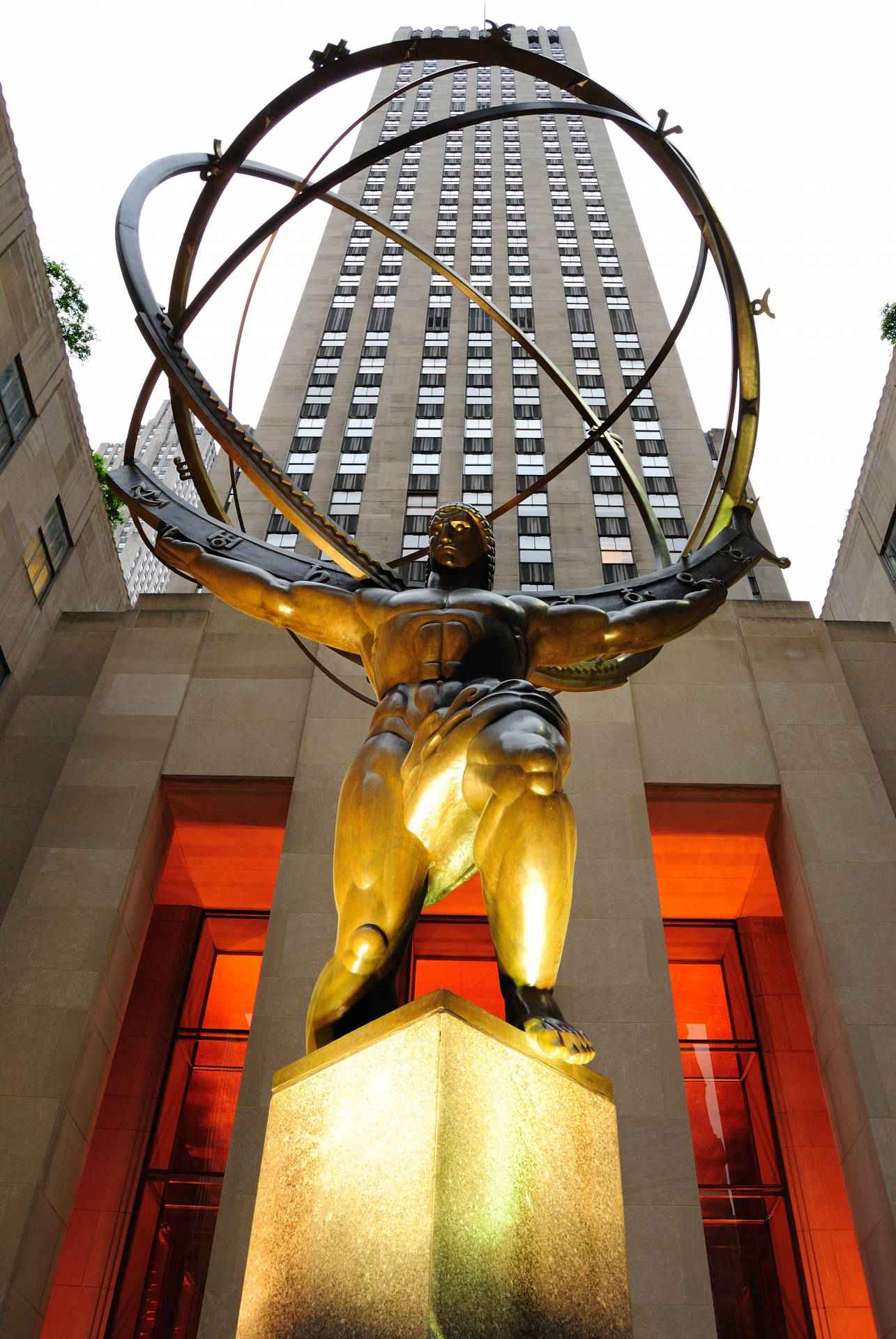