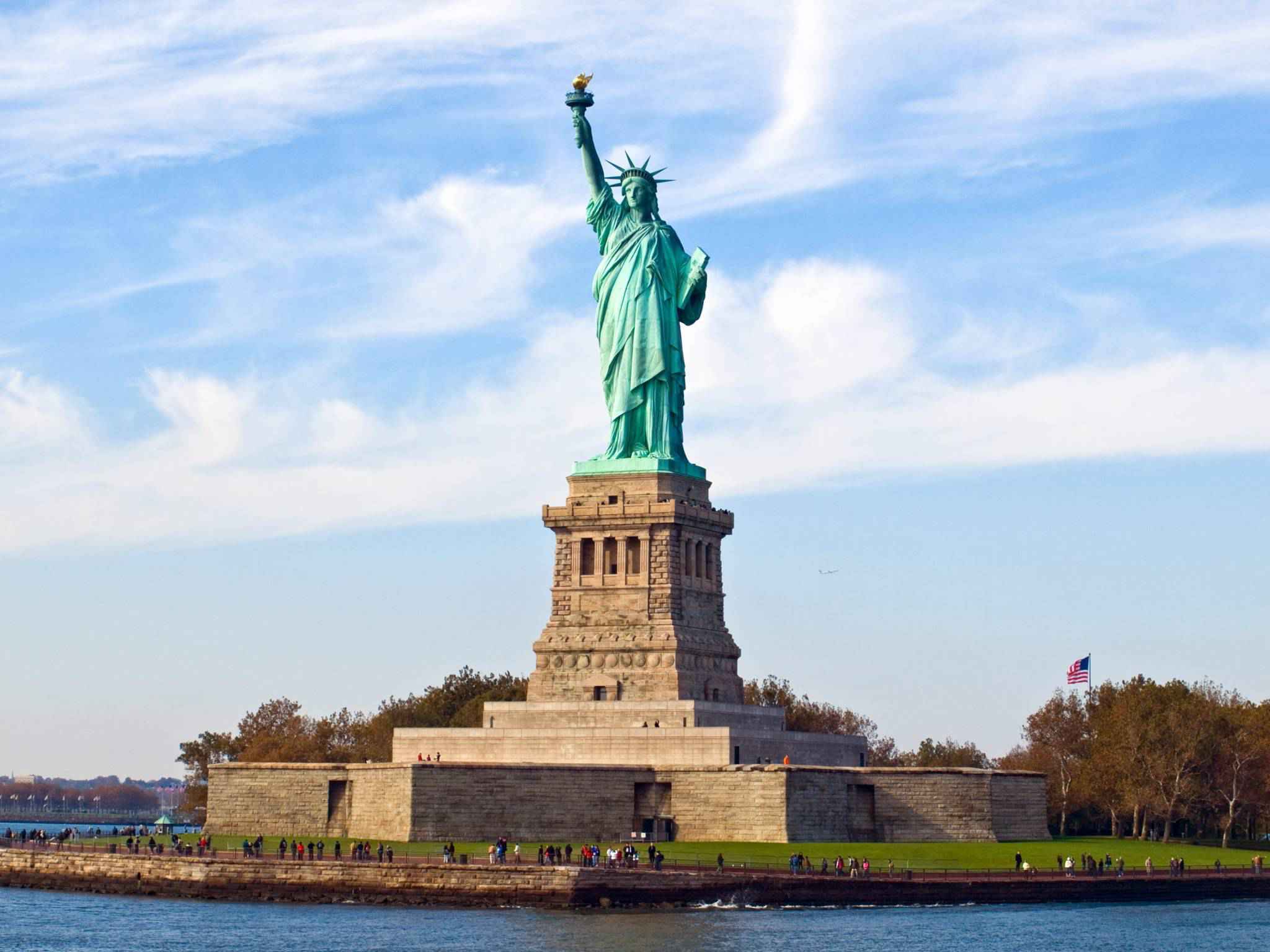 The Statue of Liberty is a colossal neoclassical sculpture on Liberty Island in New York Harbor in New York City, in the United States. The copper statue, designed by Frédéric Auguste Bartholdi, a French sculptor, was built by Gustave Eiffel and dedicated on October 28, 1886. It was a gift to the United States from the people of France. The statue is of a robed female figure representing Libertas, the Roman goddess, who bears a torch and a tabula ansata (a tablet evoking the law) upon which is inscribed the date of the American Declaration of Independence, July 4, 1776. A broken chain lies at her feet. The statue is an icon of freedom and of the United States, and was a welcoming sight to immigrants arriving from abroad.

Design
The foundation of Bartholdi's statue was to be laid inside Fort Wood, a disused army base on Bedloe's Island constructed between 1807 and 1811. Since 1823, it had rarely been used, though during the Civil War, it had served as a recruiting station. The fortifications of the structure were in the shape of an eleven-point star. The statue's foundation and pedestal were aligned so that it would face southeast, greeting ships entering the harbor from the Atlantic Ocean. In 1881, the New York committee commissioned Richard Morris Hunt to design the pedestal. Within months, Hunt submitted a detailed plan, indicating that he expected construction to take about nine months. He proposed a pedestal 114 feet (35 m) in height; faced with money problems, the committee reduced that to 89 feet (27 m).

Hunt's pedestal design contains elements of classical architecture, including Doric portals, as well as some elements influenced by Aztec architecture. The large mass is fragmented with architectural detail, in order to focus attention on the statue. In form, it is a truncated pyramid, 62 feet (19 m) square at the base and 39.4 feet (12.0 m) at the top. The four sides are identical in appearance. Above the door on each side, there are ten disks upon which Bartholdi proposed to place the coats of arms of the states (between 1876 and 1889, there were 38 U.S. states), although this was not done. Above that, a balcony was placed on each side, framed by pillars. Bartholdi placed an observation platform near the top of the pedestal, above which the statue itself rises. According to author Louis Auchincloss, the pedestal "craggily evokes the power of an ancient Europe over which rises the dominating figure of the Statue of Liberty". The committee hired former army General Charles Pomeroy Stone to oversee the construction work. Construction on the 15-foot-deep (4.6 m) foundation began in 1883, and the pedestal's cornerstone was laid in 1884. In Hunt's original conception, the pedestal was to have been made of solid granite. Financial concerns again forced him to revise his plans; the final design called for poured concrete walls, up to 20 feet (6.1 m) thick, faced with granite blocks. This Stony Creek granite came from the Beattie Quarry in Branford, Connecticut. The concrete mass was the largest poured to that time.

Norwegian immigrant civil engineer Joachim Goschen Giæver designed the structural framework for the Statue of Liberty. His work involved design computations, detailed fabrication and construction drawings, and oversight of construction. In completing his engineering for the statue's frame, Giæver worked from drawings and sketches produced by Gustave Eiffel.

Location and tourism
The statue is situated in Upper New York Bay on Liberty Island south of Ellis Island, which together comprise the Statue of Liberty National Monument. Both islands were ceded by New York to the federal government in 1800. As agreed in an 1834 compact between New York and New Jersey that set the state border at the bay's midpoint, the original islands remain New York territory despite their location on the New Jersey side of the state line. Liberty Island is one of the islands that are part of the borough of Manhattan in New York. Land created by reclamation added to the 2.3 acres (0.93 ha) original island at Ellis Island is New Jersey territory.

No charge is made for entrance to the national monument, but there is a cost for the ferry service that all visitors must use, as private boats may not dock at the island. A concession was granted in 2007 to Statue Cruises to operate the transportation and ticketing facilities, replacing Circle Line, which had operated the service since 1953. The ferries, which depart from Liberty State Park in Jersey City and Battery Park in Lower Manhattan, also stop at Ellis Island when it is open to the public, making a combined trip possible. All ferry riders are subject to security screening, similar to airport procedures, prior to boarding. Visitors intending to enter the statue's base and pedestal must obtain a complimentary museum/pedestal ticket along with their ferry ticket. Those wishing to climb the staircase within the statue to the crown purchase a special ticket, which may be reserved up to a year in advance. A total of 240 people per day are permitted to ascend: ten per group, three groups per hour. Climbers may bring only medication and cameras—lockers are provided for other items—and must undergo a second security screening. 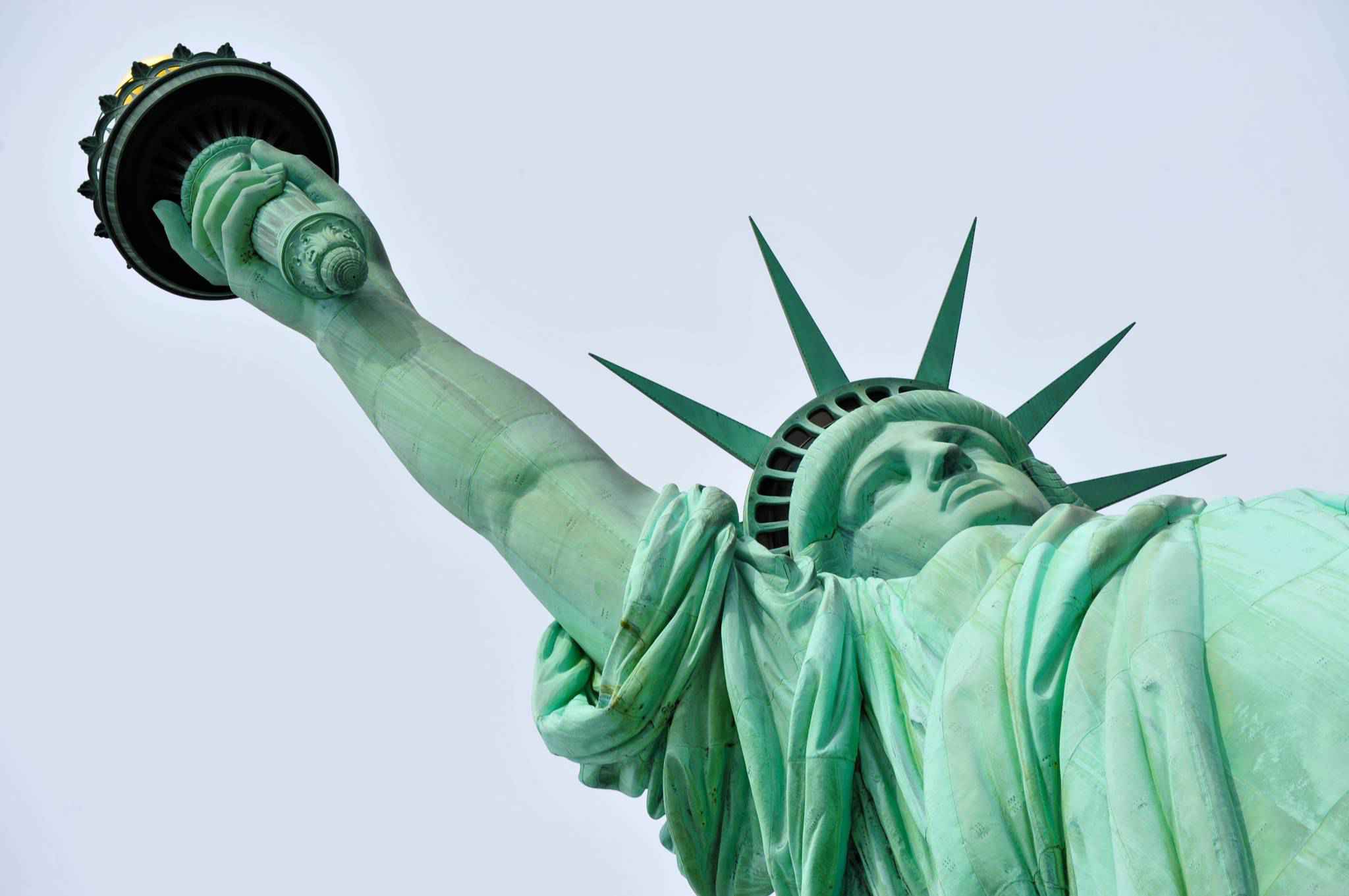