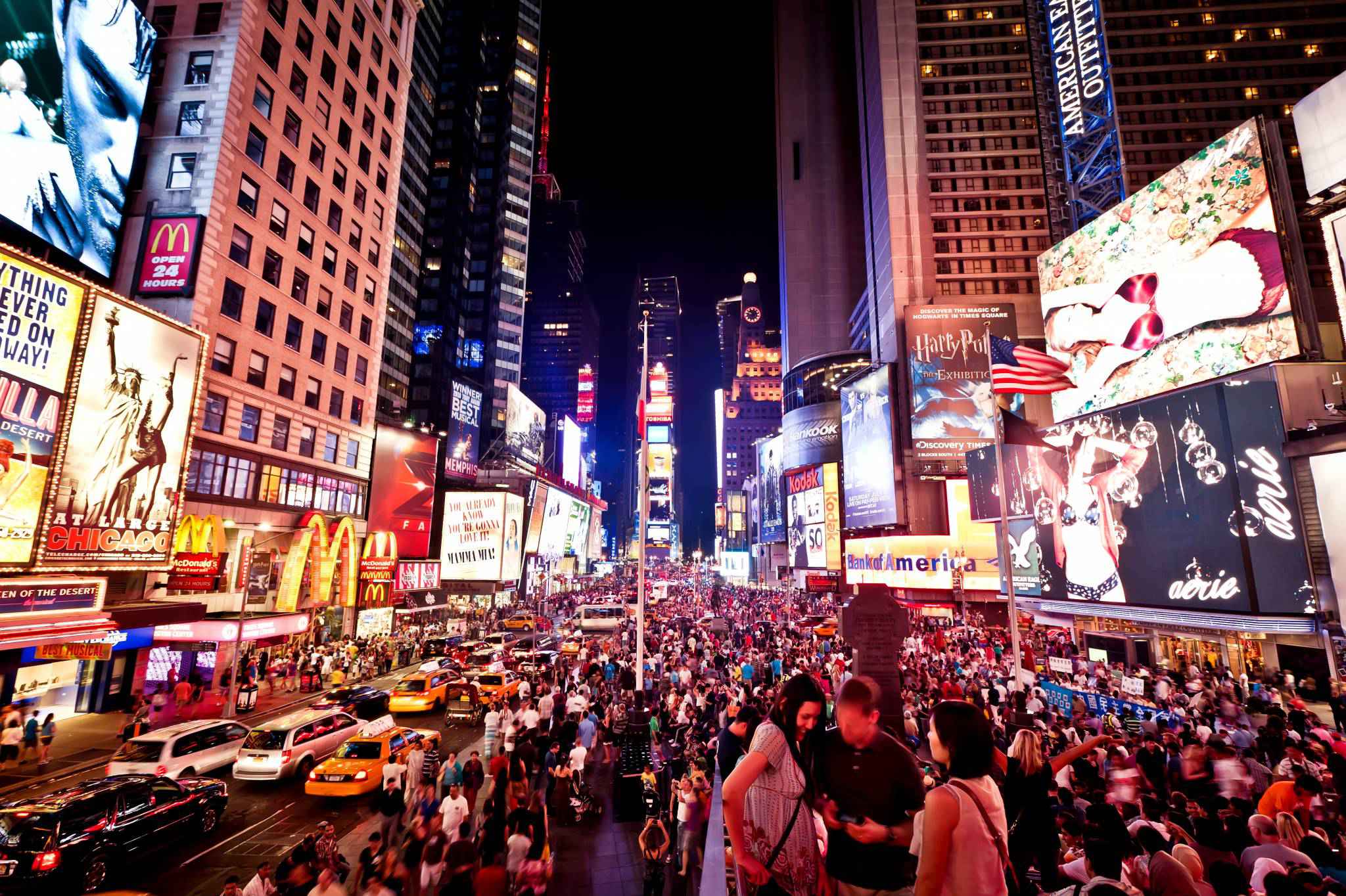 Times Square is a major commercial intersection and neighborhood in Midtown Manhattan, New York City, at the junction of Broadway and Seventh Avenue, and stretching from West 42nd to West 47th Streets. Brightly adorned with billboards and advertisements, Times Square is sometimes referred to as The Crossroads of the World,The Center of the Universe, the heart of The Great White Way, and the "heart of the world". One of the world's busiest pedestrian intersections, it is also the hub of the Broadway Theater District and a major center of the world's entertainment industry. Times Square is one of the world's most visited tourist attractions, drawing an estimated 50 million visitors annually. Approximately 330,000 people pass through Times Square daily, many of them tourists, while over 460,000 pedestrians walk through Times Square on its busiest days.

Formerly known as Longacre Square, Times Square was renamed in 1904 after The New York Times moved its headquarters to the newly erected Times Building, the site of the annual ball drop which began on December 31, 1907, and continues today, attracting over a million visitors to Times Square every New Year's Eve.
Times Square is not a square in the geometric sense of a polygon, but is more of a bowtie shape, or two triangles emanating roughly north and south from 45th Street.Duffy Square, the northernmost of Times Square's triangles, was dedicated in 1937 to Chaplain Francis P. Duffy of New York City's U.S. 69th Infantry Regiment and is the site of a memorial to him, along with a statue of George M. Cohan.

Times Square is the site of the annual New Year's Eve ball drop. About one million revelers crowd Times Square for the New Year's Eve celebrations, more than twice the usual number of visitors the area usually receives daily. However, for the millennium celebration on December 31, 1999, published reports stated approximately two million people overflowed Times Square, flowing from 6th Avenue to 8th Avenue and all the way back on Broadway and Seventh Avenues to 59th Street, making it the largest gathering in Times Square since August 1945 during celebrations marking the end of World War II.

On December 31, 1907, a ball signifying New Year's Day was first dropped at Times Square, and the Square has held the main New Year's celebration in New York City ever since. On that night, hundreds of thousands of people congregate to watch the Waterford Crystal ball being lowered on a pole atop the building, marking the start of the new year. It replaced a lavish fireworks display from the top of the building that was held from 1904 to 1906, but stopped by city officials because of the danger of fire. Beginning in 1908, and for more than eighty years thereafter, Times Square sign maker Artkraft Strauss was responsible for the ball-lowering. During World War II, a minute of silence, followed by a recording of church bells pealing, replaced the ball drop because of wartime blackout restrictions. Today, Countdown Entertainment and One Times Square handle the New Year's Eve event in conjunction with the Times Square Alliance.

A new energy-efficient LED ball debuted for the arrival of 2008, which was the centennial of the Times Square ball drop. The 2008/2009 ball was larger and has become a permanent installation as a year-round attraction, being used for celebrations on days such as Valentine's Day and Halloween. 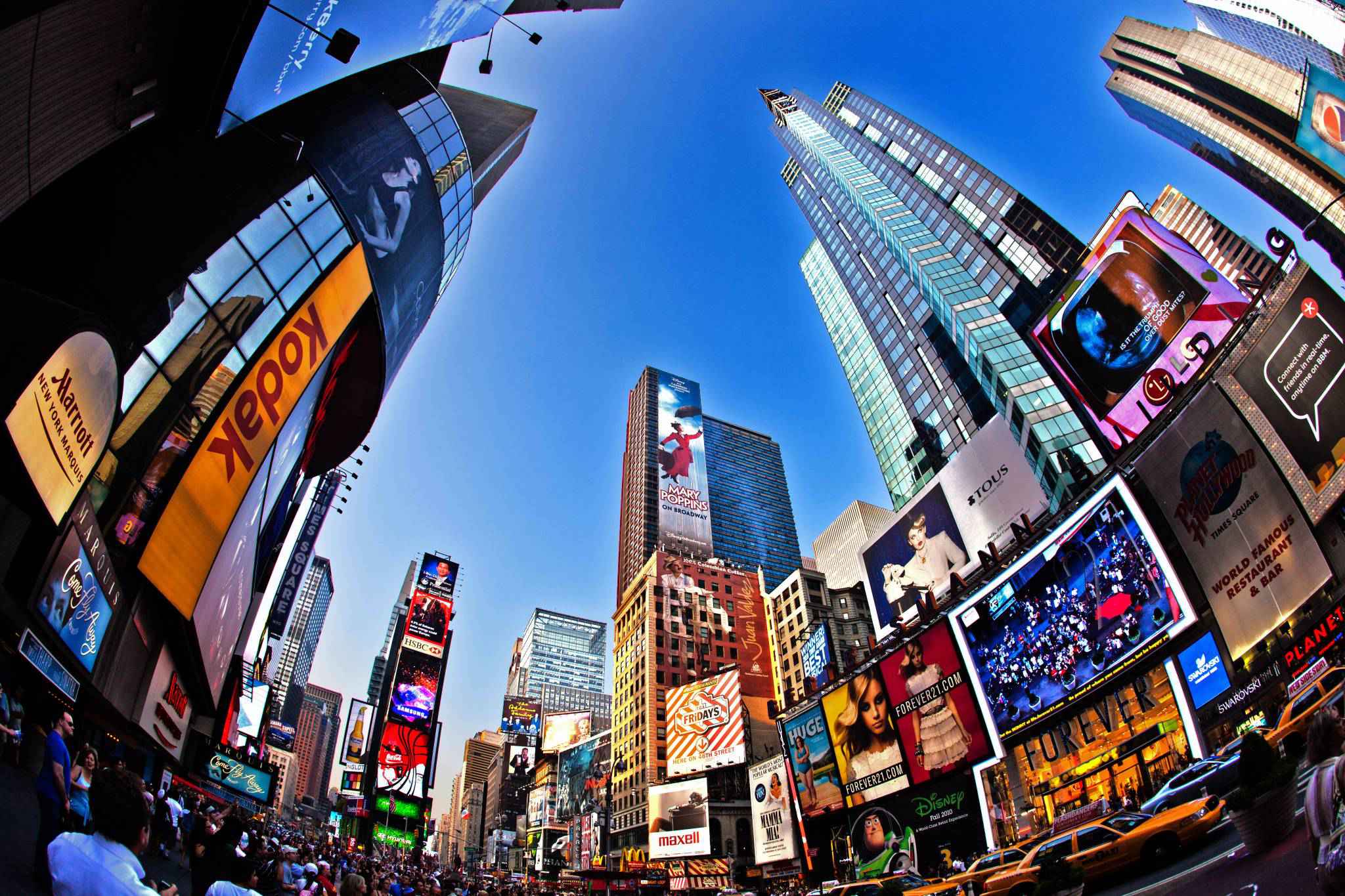