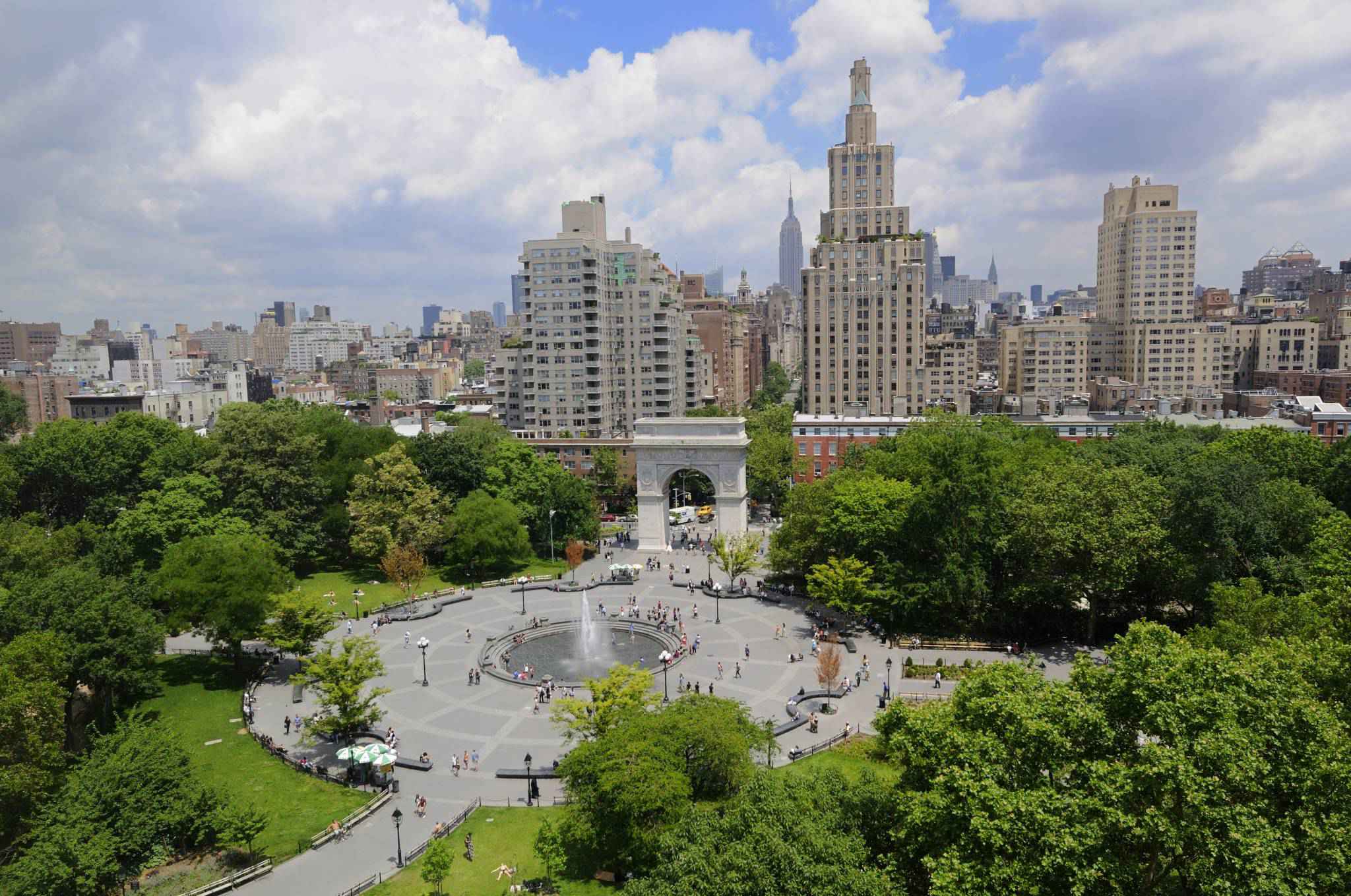 Union Square is an important and historic intersection and surrounding neighborhood in Manhattan, New York City, located where Broadway and the former Bowery Road – now Fourth Avenue – came together in the early 19th century; its name denotes that "here was the union of the two principal thoroughfares of the island" rather than celebrating either the Federal union of the United States or labor unions . The current Union Square Park is bounded by 14th Street on the south, Union Square West on the west side, 17th Street on the north, and on the east Union Square East, which links together Broadway and Park Avenue South to Fourth Avenue and the continuation of Broadway. The park is under the aegis of the New York City Department of Parks and Recreation.

Union Square is noted for its impressive equestrian statue of U.S. President George Washington, modeled by Henry Kirke Brown and unveiled in 1856, the first public sculpture erected in New York City since the equestrian statue of George III in 1770, and the first American equestrian sculpture cast in bronze; the historic moment depicted is Evacuation Day, November 25, 1783, when the British left the city and General Washington triumphantly led his troops back into the city. Other statues in the park include the Marquis de Lafayette, modeled by Frédéric Auguste Bartholdi and dedicated at the Centennial, July 4, 1876, Abraham Lincoln, modeled by Henry Kirke Brown (1870), and the James Fountain (1881), a Temperance fountain with the figure of Charity who empties her jug of water, aided by a child; it was donated by Daniel Willis James and sculpted by Adolf Donndorf. A statue of Mahatma Gandhi in the southwest corner of the park was added in 1986.

Greenmarkets and businesses
In 1976, the Council on the Environment of New York City (now GrowNYC) established the Greenmarket program, which provided regional small family farmers with opportunities to sell their fruits, vegetables and other farm products at open-air markets in the city. There were originally seven farmers at the first Greenmarket, and their selection sold out by noon. That summer, two more markets opened in New York City. Despite some backlash from local merchants and supermarkets who believed the Greenmarket was cutting into their profits, more markets opened in the city.

Today, the Union Square Greenmarket – the best-known of the markets – is held Mondays, Wednesdays, Fridays, and Saturdays between 8 AM and 6 PM year round. The market is served by a number of regional farmers, as the average distance between farmers and the market is 90 miles (140 km). During peak seasons, the Greenmarket serves more than 250,000 customers per week, who purchase more than one thousand varieties of fruits and vegetables can be found at the Greenmarket; and the variety of produce available is much broader than what is found in a conventional supermarket.

Union Square is a popular meeting place, given its central location in Manhattan and its many nearby subway routes. There are many bars and restaurants on the periphery of the square, and the surrounding streets have some of the city's most renowned (and expensive) restaurants. S. Klein's department store promoted itself in the mid-20th century as an "On the Square" alternative to higher prices uptown, and late in the century several big-box chain stores established a presence, including Barnes & Noble, Babies "R" Us and Staples. In addition, the W Union Square Hotel opened at the park's northeast corner, in the landmark building that formerly housed the Guardian Life Insurance Company of America. 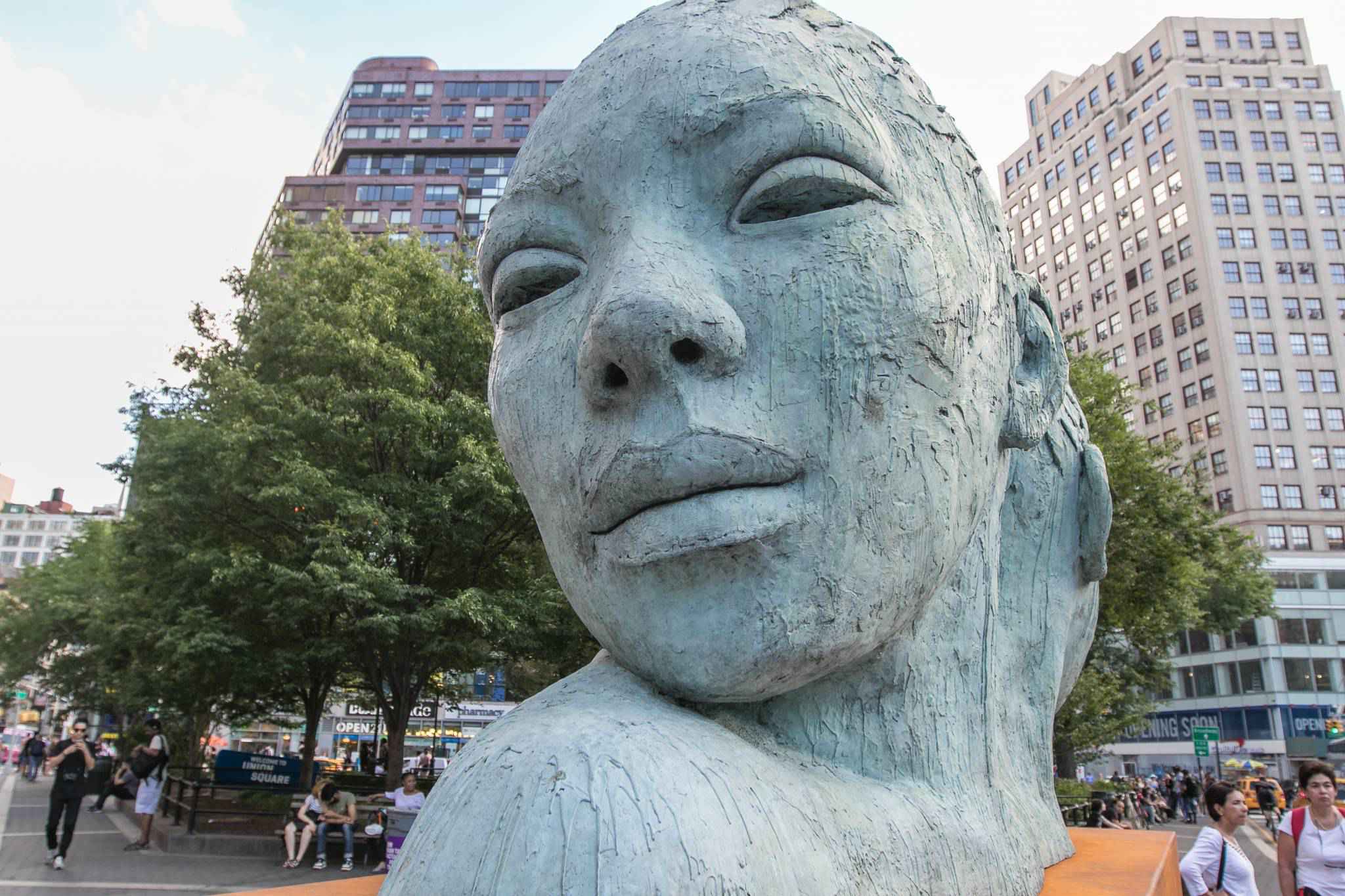