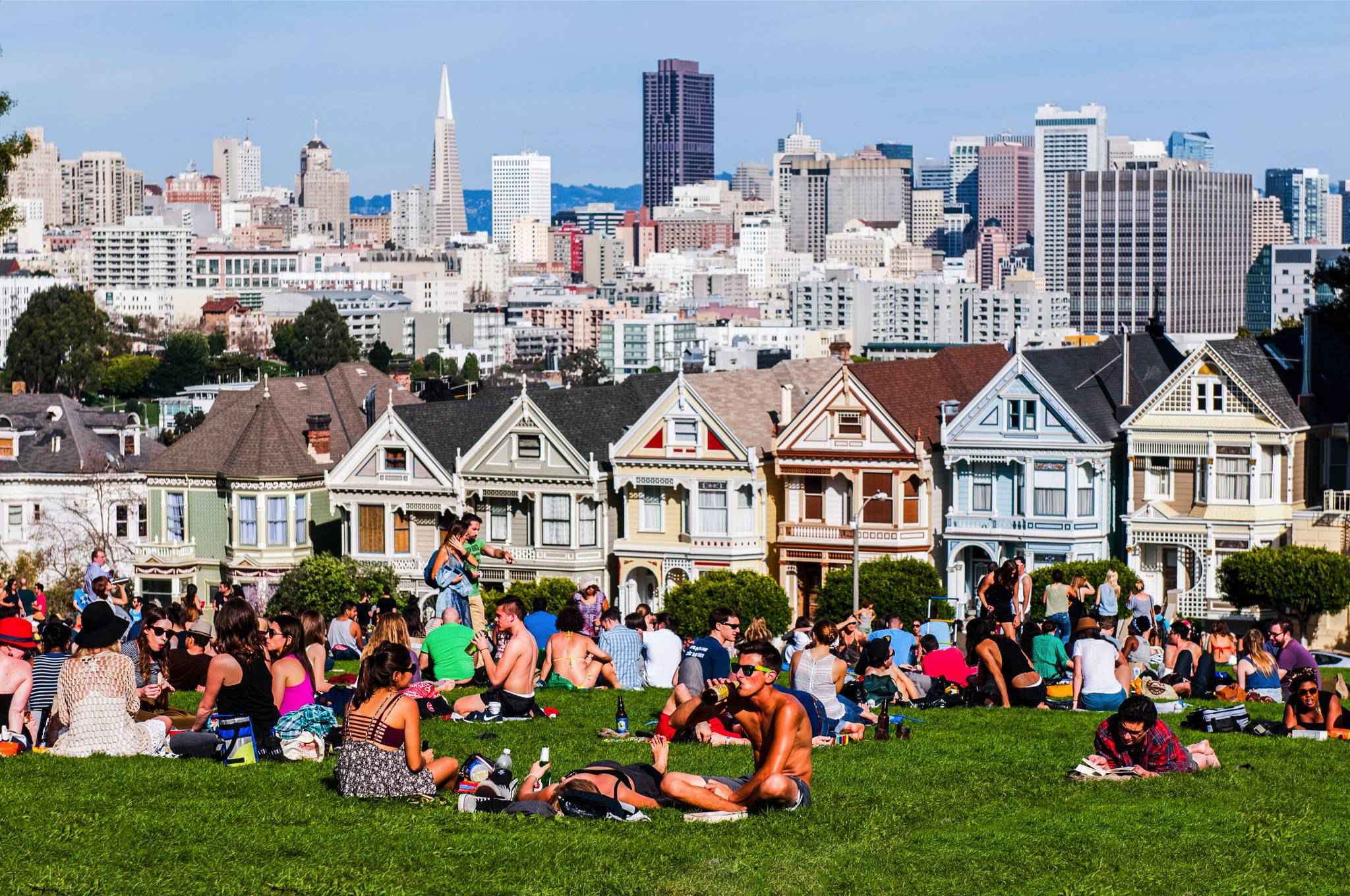 Alamo Square is a residential neighborhood and park in San Francisco, California, in the Western Addition. Its boundaries are not well-defined, but are generally considered to be Webster Street on the east, Golden Gate Avenue on the north, Divisadero Street on the west, and Fell Street on the south.

Alamo Square Park, the neighborhood's focal point and namesake, consists of four city blocks at the top of a hill overlooking much of downtown San Francisco, with a number of large and architecturally distinctive mansions along the perimeter. The park is bordered by Hayes Street to the south, Steiner Street to the east, Fulton Street to the north, and Scott Street to the west.

Attractions and characteristics
Alamo Square Park includes a playground and a tennis court, and is frequented by neighbors, tourists, and dog owners. On a clear day, the Transamerica Pyramid building and the tops of the Golden Gate Bridge and Bay Bridge can be seen from the park's center. The San Francisco City Hall can be seen directly down Fulton Street. The area is part of the city's fifth Supervisorial district and is served by several Muni bus lines, including the 5, 21, 22, and 24.

Architecture
The Alamo Square neighborhood is characterized by Victorian architecture that was left largely untouched by the urban renewal projects in other parts of the Western Addition. The Alamo Square area contains the second largest concentration of homes over 10,000 square feet in San Francisco, after the Pacific Heights neighborhood.

A row of Victorian houses facing the park on Steiner Street, known as the "Painted Ladies", are often shown in the foreground of panoramic pictures of the city's downtown area. A number of movies, television shows and commercials have been filmed in or around Alamo Square. The park features heavily in the 1978 horror film The Invasion of the Body Snatchers, and the romantic comedy The Five-Year Engagement. The opening sequence of the American sitcom Full House (1987-1995) features a romp in Alamo Square Park with the famous row of Victorians in the background.

There are many architecturally significant mansions on the perimeter of the park, including the William Westerfeld House, the Archbishop's Mansion, the residences of the Russian and German Imperial consuls in the early 1900s, and the mansions on the block diagonally across from the Painted Ladies. In 1984, the Alamo Square Historic District was created by the Board of Supervisors, stating:
The Alamo Square Historic District is significant as a continuum of distinguished residential architecture by distinguished architects spanning the period from the 1870's to the 1920's. The towered Westerfield House, the renowned "Postcard Row" with its background of the downtown skyline, and the neighboring streetscapes are as identified worldwide with San Francisco as the cable cars and Coit Tower. With a variety of architectural styles, the District is unified in its residential character, relatively small scale, construction type, materials (principally wood), intense ornamentation (especially at entry and cornice), and use of basements and retaining walls to adjust for hillside sites... With a high degree of integrity to its original designs, the District clearly serves as a visual reminder of how businessmen lived two to four generations ago 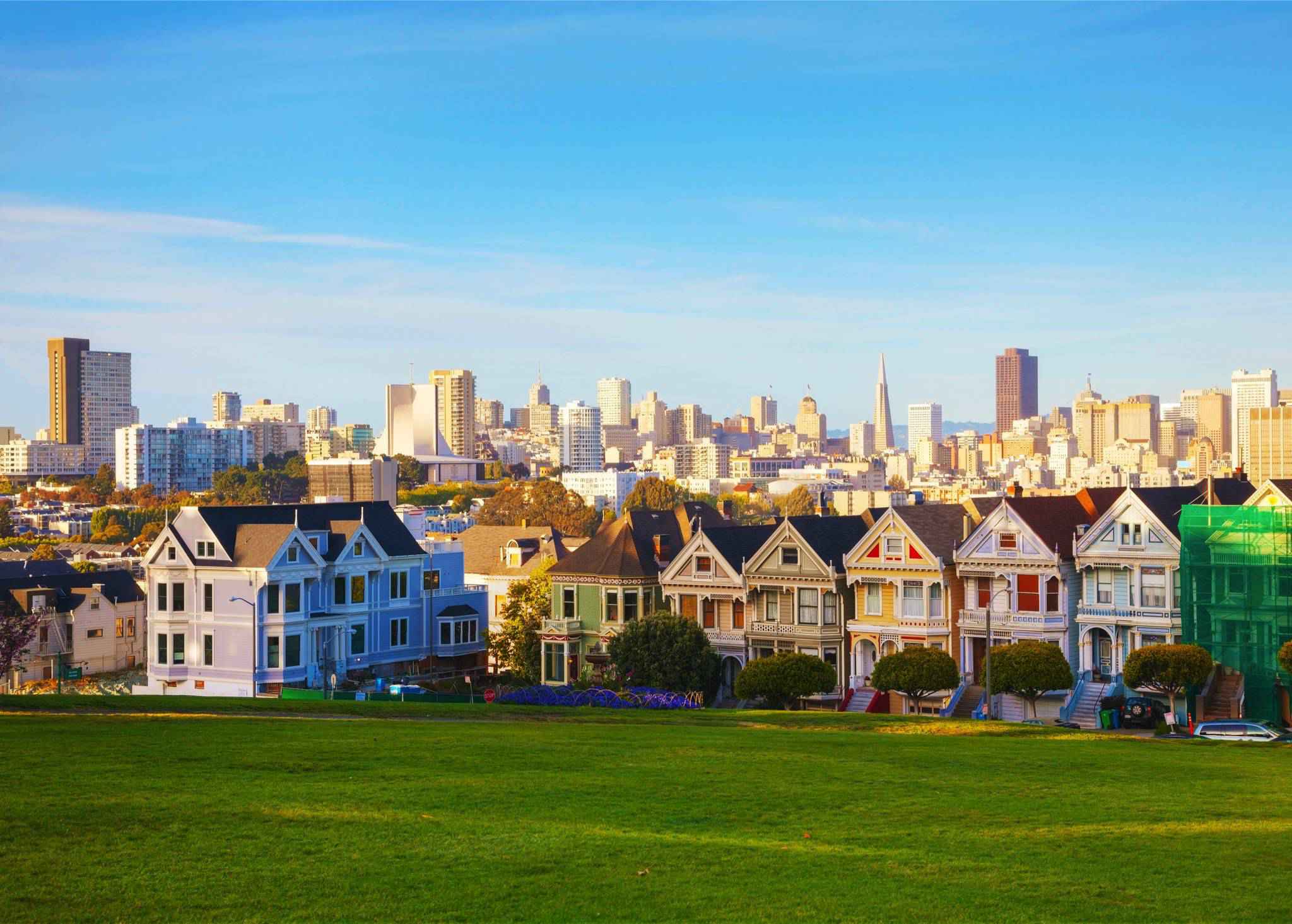