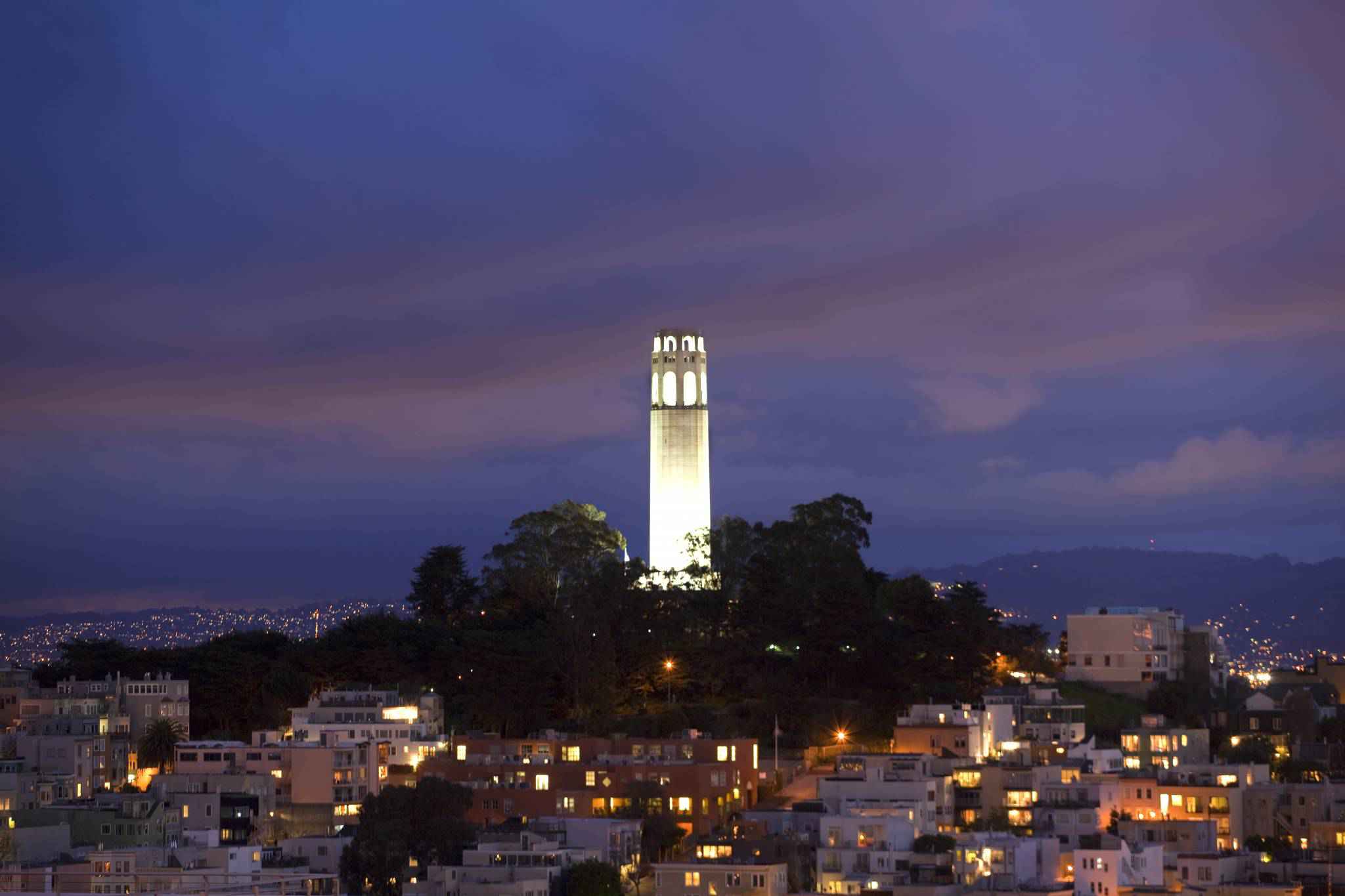 Coit Tower, also known as the Lillian Coit Memorial Tower, is a 210-foot tower in the Telegraph Hill neighborhood of San Francisco, California. The tower, in the city's Pioneer Park, was built in 1933 using Lillie Hitchcock Coit's bequest to beautify the city of San Francisco; at her death in 1929 Coit left one-third of her estate to the city for civic beautification. The tower was proposed in 1931 as an appropriate use of Coit's gift. It was added to the National Register of Historic Places on January 29, 2008.
The art deco tower, built of unpainted reinforced concrete, was designed by architects Arthur Brown, Jr. and Henry Howard, with fresco murals by 27 different on-site artists and their numerous assistants, plus two additional paintings installed after creation off-site. Although an apocryphal story claims that the tower was designed to resemble a fire hose nozzle due to Coit's affinity with the San Francisco firefighters of the day, the resemblance is coincidental.

Design
Brown's competition design envisioned a restaurant in the tower, which was changed to an exhibition area in the final version. The design uses three nesting concrete cylinders, the outermost a tapering fluted 180-foot (55 m) shaft that supports the viewing platform. An intermediate shaft contains a stairway, and an inner shaft houses the elevator. The observation deck is 32 feet (9.8 m) below the top, with an arcade and skylights above it. A rotunda at the base houses display space and a gift shop.

The artists were committed in varying degrees to racial equality and to leftist and Marxist political ideas strongly expressed in the paintings. Bernard Zakheim's mural "Library" depicts fellow artist John Langley Howard crumpling a newspaper in his left hand as he reaches for a shelved copy of Karl Marx's Das Kapital (here spelled as Das Capital) with his right. Workers of all races are shown as equals, often in the heroic poses of Socialist realism, while well-dressed racially white members of the capitalist classes enjoy the fruit of their labor. Victor Arnautoff's "City Life" includes The New Masses and The Daily Worker periodicals in the scene's news stand rack; John Langley Howard's mural depicts an ethnically diverse Labor March as well as showing a destitute family panning for gold while a wealthy, heavily-caricatured ensemble observes; and Stackpole's Industries of California was composed along the same lines as an early study of the destroyed Man at the Crossroads.

The youngest of the muralists, George Albert Harris, painted a mural called "Banking and Law". In the mural, the world of finance is represented by the Federal Reserve Bank and a stock market ticker (in which stocks are shown as declining) and law is illustrated by a law library. Some of the book titles that appear in the law library, such as 'Civil, Penal, and Moral Codes', are legitimate, while others list fellow muralists as authors, in a joking or derogatory manner.

After Diego Rivera's Man at the Crossroads mural was destroyed by its Rockefeller Center patrons for the inclusion of an image of Lenin, the Coit Tower muralists protested, picketing the tower. Sympathy for Rivera led some artists to incorporate references to the Rivera incident; in Zakheim's "Library" panel, Stackpole is painted reading a newspaper headline announcing the destruction of Rivera's mural.

Two of the murals are of San Francisco Bay scenes. Most murals are done in fresco; the exceptions are one mural done in egg tempera (upstairs, in the last decorated room) and the works done in the elevator foyer, which are oil on canvas. While most of the murals have been restored, a small segment (the spiral stairway exit to the observation platform) was not restored but durably painted over with epoxy surfacing.

Most of the murals are open for public viewing without charge during open hours, although there are ongoing negotiations by the Recreation and Parks Department of San Francisco to begin charging visitors a fee to enter the mural rotunda. The murals in the spiral stairway, normally closed to the public, are open for viewing through tours.
Since 2004 artist Ben Wood has collaborated with other artists on large scale video projections onto the exterior of Coit Tower, in 2004, 2006, 2008 & 2009.

Pioneer Park
Pioneer Park is a 4.89-acre (19,800 m2) park crowning the top of Telegraph Hill in San Francisco. It was established in 1876 in celebration of the United States Centennial. Prior to establishment of the park, it was the site of the Marine Telegraph Station. The main feature of the park, Coit Tower, was completed in 1933 using a $100,000 bequest left to the city by Lillie Hitchcock Coit in 1924. A bronze statue of Christopher Columbus was placed in the park in 1957, donated by the city's Italian-American community. 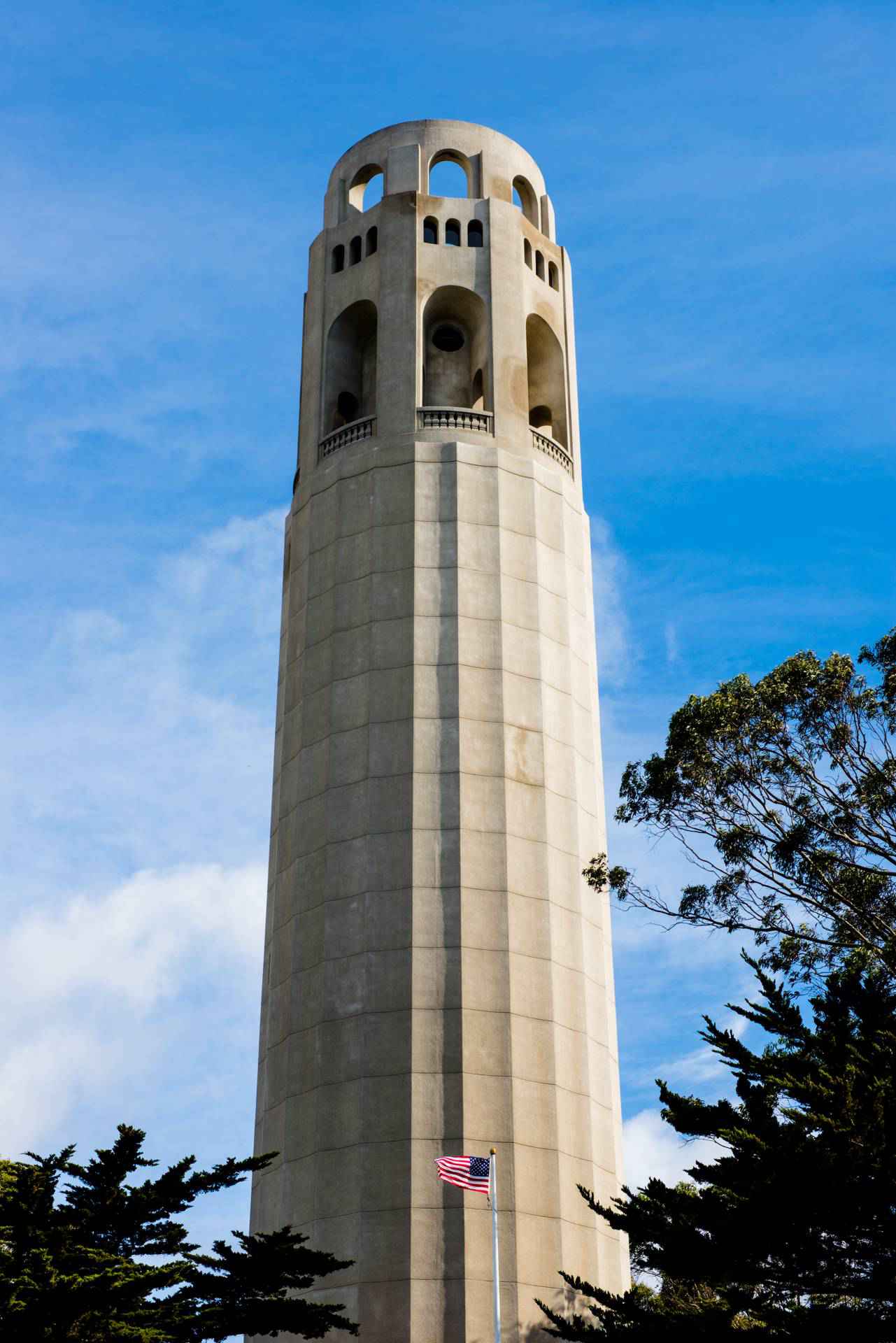