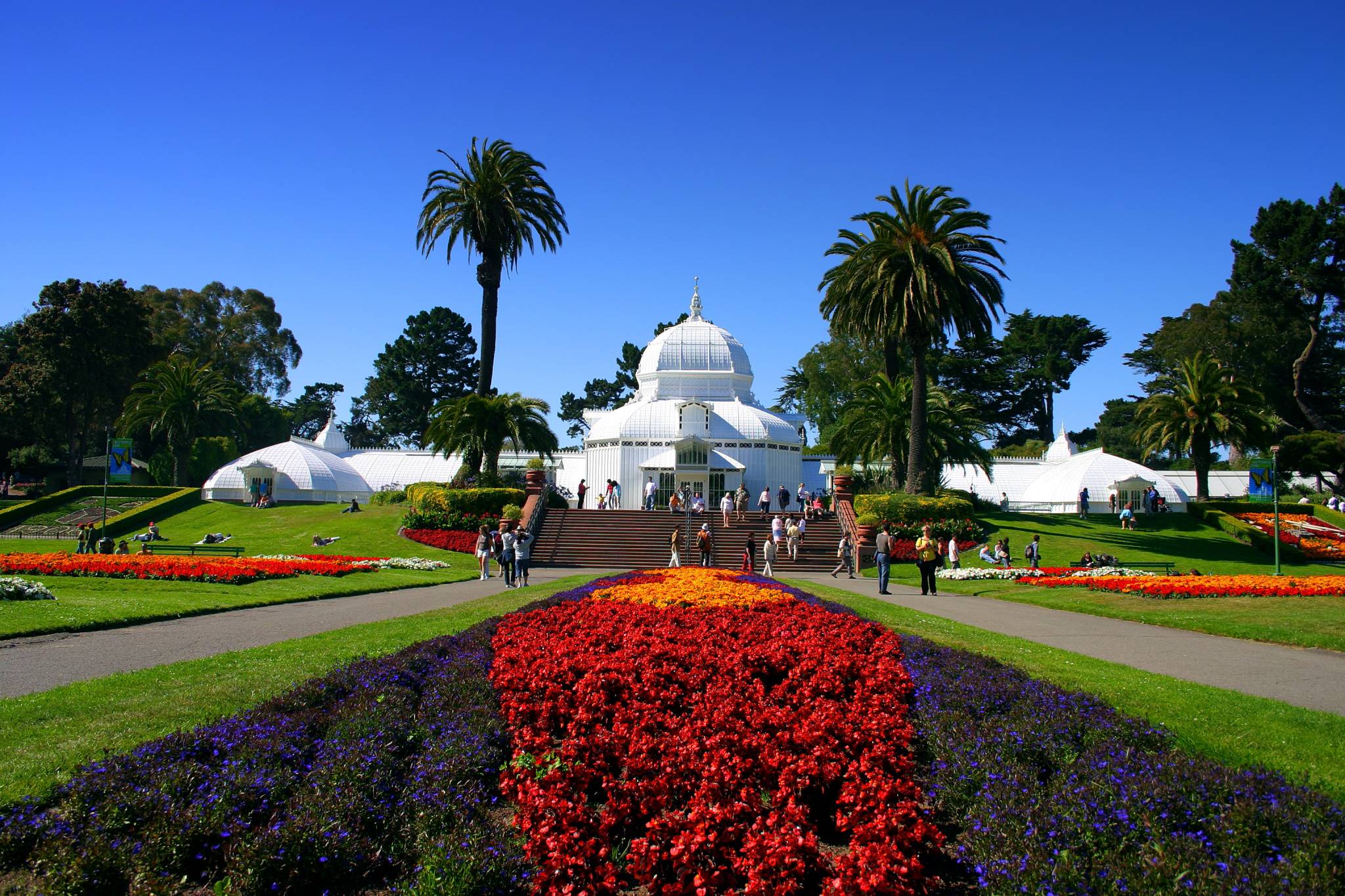 The Conservatory of Flowers is a greenhouse and botanical garden that houses a collection of rare and exotic plants in Golden Gate Park, San Francisco, California. With construction having been completed in 1879, it is the oldest building in the park. It was one of the first municipal conservatories constructed in the United States and is the oldest remaining municipal wooden conservatory in the country. For these distinctions and for its associated historical, architectural, and engineering merits, the Conservatory of Flowers is listed on the National Register of Historic Places and the California Register of Historical Places. It is a California Historical Landmark and a San Francisco Designated Landmark.

Architectural description
The Conservatory of Flowers is an elaborate Victorian greenhouse with a central dome rising nearly 60 feet (18 m) high and arch-shaped wings extending from it for an overall length of 240 feet (73 m). The building sits atop a gentle slope overlooking Conservatory Valley. The structural members are articulated through one predominant form, a four-centered or Tudor arch.

The Conservatory of Flowers consists of a wood structural skeleton with glass walls set on a raised masonry foundation. The entire structure has a shallow E-shaped plan that is oriented along an east-west axis. The central 60-foot (18 m) high pavilion is entered through a one-story, glassed-in vestibule with a gable roof on the south side of the pavilion. Flanking the rotunda to the east and west are one-story, symmetrical wings framed by wood arches. Each wing is L-shaped in plan, with cupolas adorning the intersection of the two segments.

The octagonal pavilion supports an arched roof that is, in turn, surmounted by a clerestory and dome. The clerestory is supported by eight free-standing, wood-clad, cast-iron columns located within the rotunda and grouped in pairs. Projecting from the pavilion roof on the east, west, and south elevations are dormer windows with peak roofs. Between major arched structural framing members are wood muntins that hold the glass lights on their sides. The lights lap one over one another like shingles and follow the curve of the arches.

The construction of each arch is aesthetically appealing in its simplicity, but also structurally clever in that it takes maximum advantage of wood as a building material while overcoming its inherent structural shortcomings. From a structural perspective, the arch design utilizes the mechanical properties of the material. Wood is strongest along the length of the grain and weakest along the end grain. The use of short arch components with shallow radii minimized the amount of weaker-end grain exposed to structural forces. The assembly of the arch with several small pieces of wood, the shapes of which are identical from arch to arch, was efficient. It allowed the fabricator to set machines with guides and templates so that cutting the multiple-arch components was a simple task. Furthermore, the design required little material, since each individual arch component has only a shallow radius. Moreover, by using relatively narrow widths of lumber, the chance of warping was minimized. Finally, there was an efficiency realized in transportation, as the small size of the arch components allowed them to be easily stored and shipped.

The structural wood arches and their method of construction, along with the decorative woodwork and unique lapped glazing, define the character of the conservatory. The major character-defining elements consist of ornamental and structural woodwork, including the method of fabrication used for the arches, the lapped glazing system, the ventilation system, and the building's siting and exterior landscaping.

Today, the conservatory contains approximately 1,700 plant species. Representative plants from its collections include: 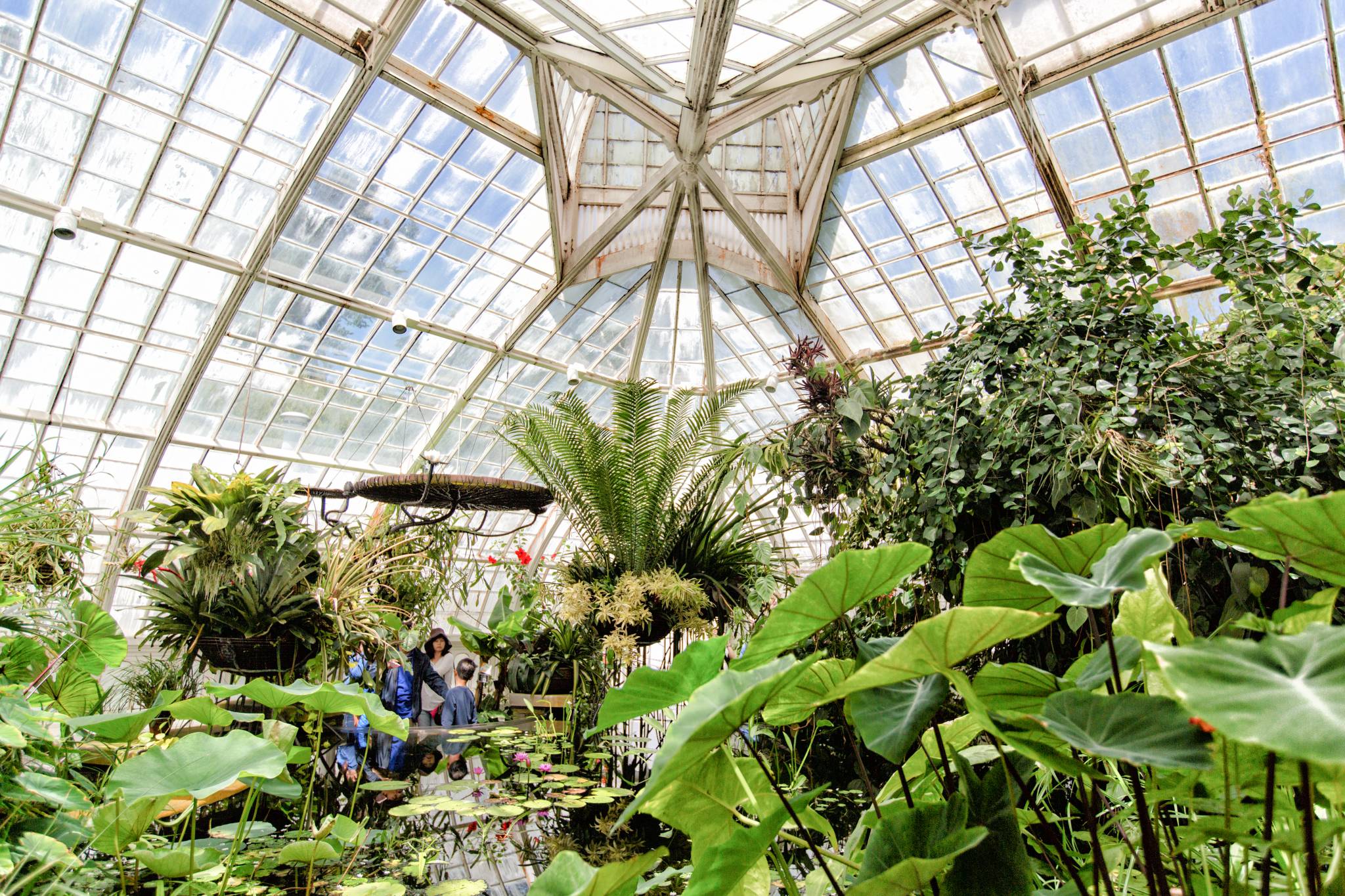