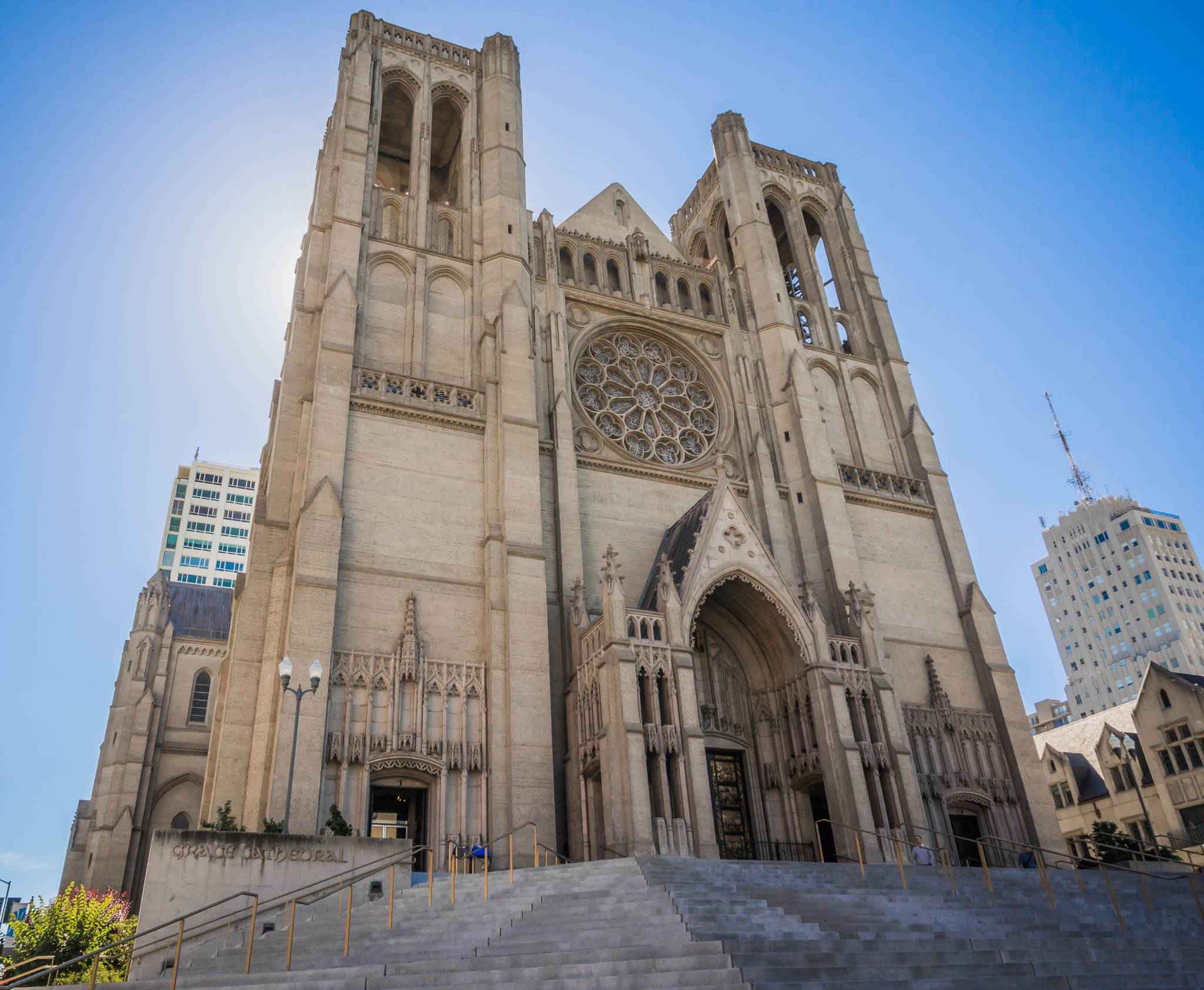 The cathedral is famed for its mosaics by Jan Henryk De Rosen, a replica of Ghiberti's Gates of Paradise, two labyrinths, varied stained glass windows, Keith Haring AIDS Chapel altarpiece, and medieval and contemporary furnishings, as well as its forty-four bell carillon, three organs, and choirs.

The cathedral has one of only a handful of remaining Episcopal men and boys cathedral choirs, the Grace Cathedral Choir of Men and Boys; the 24 boys of the choir attend the Cathedral School for Boys, while the 12 men are a professional ensemble. There is also a mixed-voice adult choir. The director of music and choirmaster is Ben Bachmann.
The Very Reverend Alan Jones retired as dean in 2009. He was also the moderator of The Forum at Grace Cathedral. In 2010, the Rev. Canon Jane Shaw was installed as the eighth dean of Grace Cathedral. She left Grace Cathedral in September 2014 to become to Dean for Religious Life and Professor of Religious Studies at Stanford University In 2015, the Rev. Malcolm Clemens Young became the ninth Dean of Grace Cathedral.

Works by Jan Henryk De Rosen
Grace Cathedral has a significant collection of varied works by Jan Henryk De Rosen. Among these are a faux-tile mural behind the Chapel of Grace reredos from 1932, the mural in the Chapel of the Nativity's Adoration from 1946 showing the Holy Family with the magi and shepherds. At the donor's request, the original angels hovering above were removed by the artist, however constellations still mark their place. De Rosen also included a little image of his boyhood home in Warsaw in the mural. On a smaller scale, De Rosen painted exquisite panels for the original old high altar which is now in the Chapel of St. Francis columbarium.

The most visible works of De Rosen in Grace Cathedral are the historical aisle murals that were painted in 1949 and 1950 and composed in a style blending elements of the early Italian masters Giotto and Mantegna.

Ghiberti doors
The cathedral entrance has a large pair of doors, often called the "Ghiberti doors". They are reproductions of the doors of the Florence Baptistery by Lorenzo Ghiberti, also dubbed the "Gates of Paradise".

In 1943, the Nazi occupation government ordered the original doors to be removed from the Florence baptistery, along with other portable artworks, to protect them from bombing and possibly to give Hermann Göring a chance to add them to his collection. They were hidden in a disused railway tunnel until 1944, and latex casts were made after their rediscovery. The replica doors were cast in 1956 from molds of the original doors and were destined for a war memorial, but when financing for the memorial fell through, San Francisco philanthropist Charles D. Field bought these replicas, and they were then shipped to San Francisco and installed on the newly completed church in time for its official dedication in 1964.

Labyrinths
Laid out on the floor of Grace Cathedral is a labyrinth that is based on the famous medieval labyrinth of Cathédrale Notre-Dame de Chartres (The Cathedral of Our Lady of Chartres) located in Chartres, France. It is said that if a visitor walks the pattern of the labyrinth it will bring them to a meditative state. There is also another labyrinth outside of the cathedral in its courtyards.

Windows
Contained in the cathedral are 7,290 square feet (677 m2) of stained glass windows by noted artists that depict over 1100 figures ranging from Adam and Eve to Albert Einstein. 32 windows or window groups, dating from 1930 to 1966, were designed by American Charles Connick and his Boston studio. Connick windows include the Chapel of Grace and baptistry window series that contains over 32,000 pieces of glass and covers nearly 833 square feet (77.4 m2). The cathedral also contains 24 faceted windows by Gabriel Loire of Chartres, France, including the Human Endeavor series depicting John Glenn, Thurgood Marshall, Jane Addams, Robert Frost, and Einstein. Between 1995-1998 several of the cathedral's choir and aisle windows were restored by Reflection Studios of Emeryville, California.

Carillon
The carillon was the gift of Nathaniel T. Coulson, a San Francisco dentist and realtor who came from Lostwithiel in Cornwall. When Coulson first arrived in San Francisco in 1875, he found his way to Grace Church, which lacked a bell tower. Although a Methodist, he vowed to provide bells for the church and eventually spent his life savings to realize his dream and to erect the Singing (north) Tower to house them. The carillon consists of forty-four bronze bells, cast and tuned at the Gillett & Johnston Foundry of Croydon, England, in 1938. The bells arrived before the cathedral tower was completed, so they spent their first years on Treasure Island in San Francisco Bay as the centerpiece of the 1939-40 Golden Gate International Exposition. The carillon was first played from its Singing Tower home on Christmas Eve, 1940, and was formally dedicated in 1943. The bells have been rung to mark a number of important events, including D-Day and the centenary of the San Francisco cable car system. 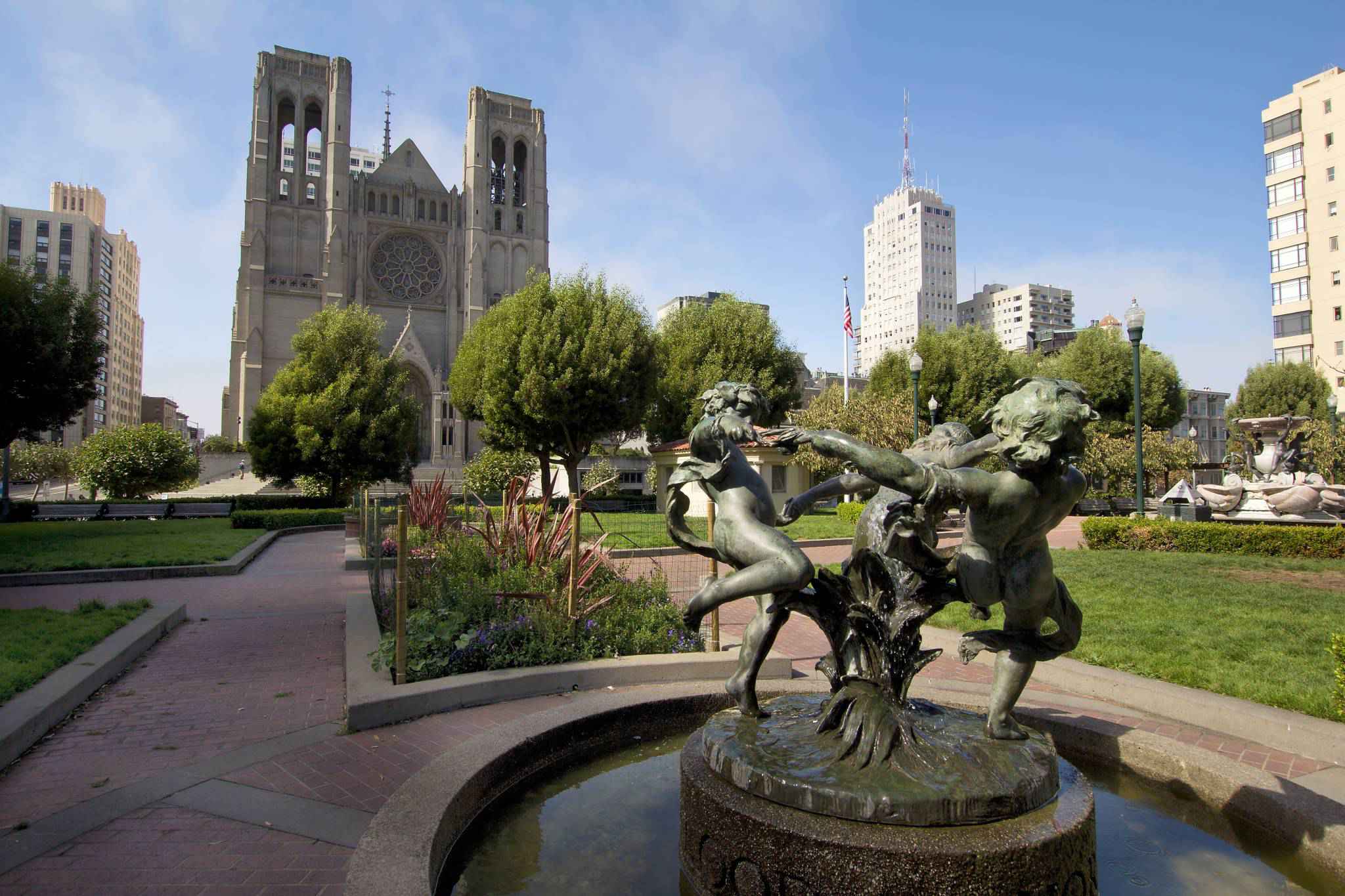