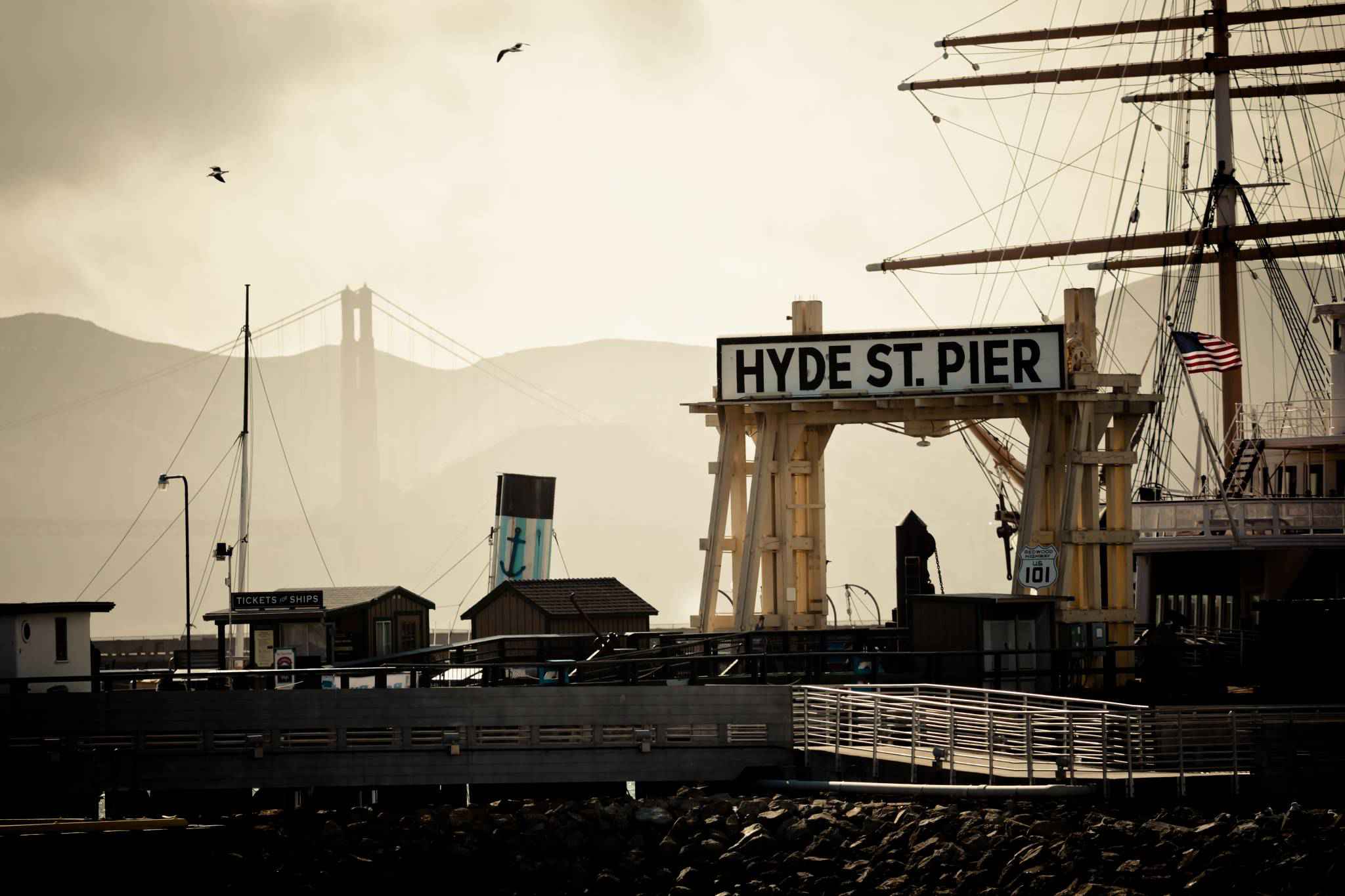 The Hyde Street Pier, at 2905 Hyde Street, is a historic ferry pier located on the northern waterfront of San Francisco, California, amidst the tourist zone of Fisherman's Wharf.
Prior to the opening of the Golden Gate Bridge and the San Francisco–Oakland Bay Bridge, it was the principal automobile ferry terminal connecting San Francisco with Marin County by way of Sausalito to the north, and the East Bay by way of Berkeley . It was designated part of U.S. Route 101 and U.S. Route 40. The ferries were operated by the Golden Gate Ferries, a subsidiary of the Southern Pacific railroad.

Today, the pier is part of the San Francisco Maritime National Historical Park. Various historical ships are anchored to the pier, some available for self-guided or docent-led tours. Among the ships on display or in storage are the Balclutha, an 1886 square rigged sailing ship, as well as C.A. Thayer, Eureka, Alma, Hercules, Eppleton Hall, and over one hundred smaller craft.

The fleet also includes over one hundred small craft.

Visitor Center
The Visitor Center is housed in the park's 1909 waterfront warehouse, located at the corner of Hyde and Jefferson Streets. The City of San Francisco declared the four-story brick structure an historic landmark in 1974, and the building was listed on the National Register of Historic Places in 1975. Inside, exhibits (including a first order Fresnel lighthouse lens and a shipwrecked boat) tell the story of San Francisco’s colorful and diverse maritime heritage. The visitor center also contains a theater and a ranger-staffed information desk.

Maritime Museum
The maritime museum was until recently housed in a Streamline Moderne (late Art Deco) building that is the centerpiece of the Aquatic Park Historic District, a National Historic Landmark at the foot of Polk Street and a minute's walk from the visitor center and Hyde Street Pier. The building was originally built (starting in 1936) by the WPA as a public bathhouse, and its interior is decorated with fantastic and colorful murals, created primarily by artist and color theoretician Hilaire Hiler. The architects were William Mooser Jr. and William Mooser III.

The Steamship Room illustrates the technological evolution of maritime power from wind to steam, while the second-floor displays include three photomurals of the early San Francisco waterfront, lithographic stones, scrimshaw and whaling guns. The third-floor gallery is used for visiting exhibitions and in 2005 exhibited "Sparks", an exhibition of shipboard radio, radiotelephone, and radioteletype technology.

Location and access
The Visitors Center, Hyde Street Pier and Maritime Museum are all situated adjacent to the foot of Hyde Street and at the western end of the Fisherman's Wharf district. The park headquarters and Maritime Research Center are located in Fort Mason, some 10 minutes walk to the west of the other sites. The Beach and Hyde Street terminal of the San Francisco cable car system adjoins the main site, while the Jones Street terminal of the F Market historic streetcar line is some 5 minutes walk to the east.

Open Water Swimming
Aquatic Park is a popular place for open water swimming, both for recreation and training. The South End Rowing Club and Dolphin Club are located in Aquatic Park. 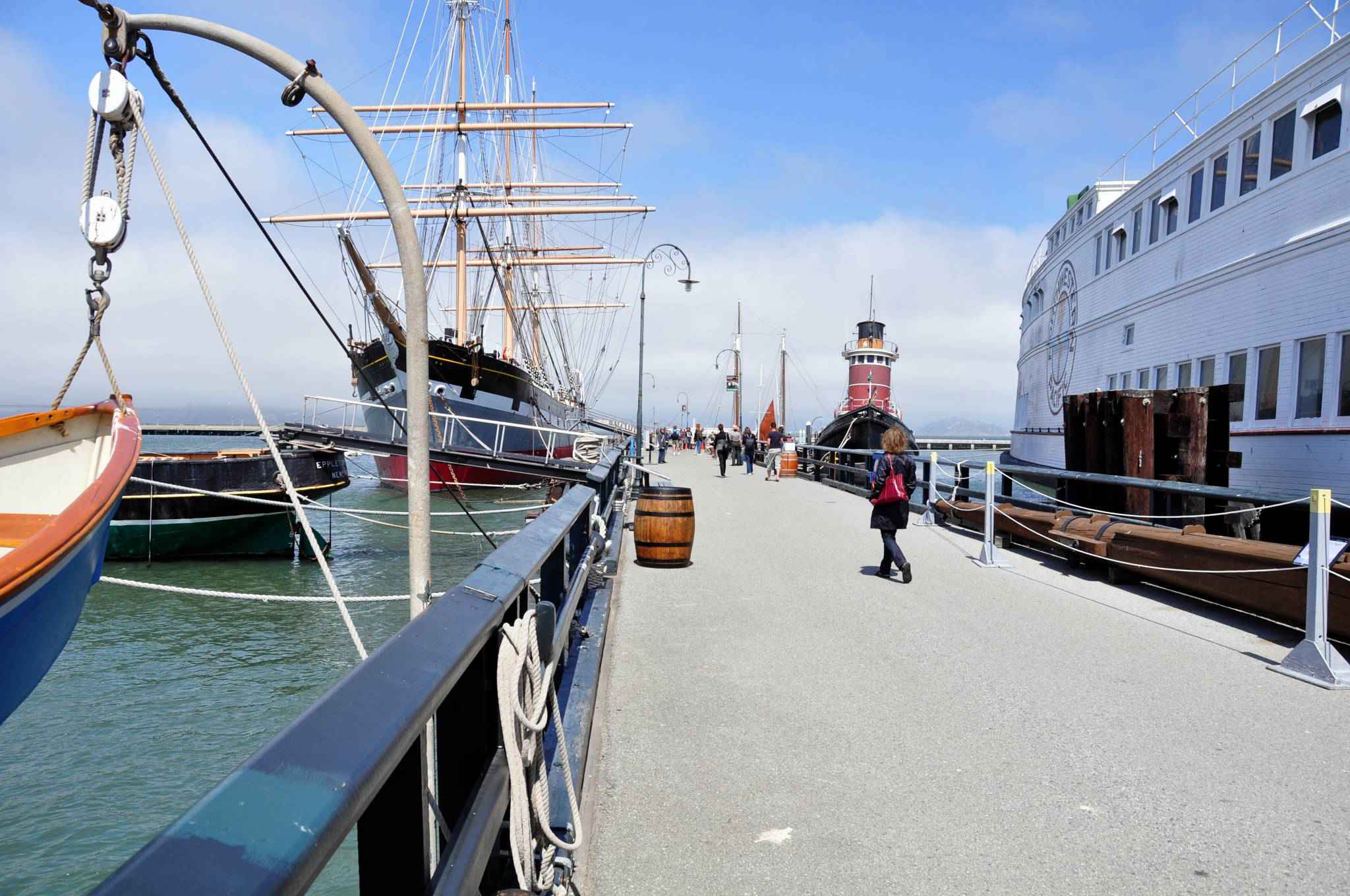