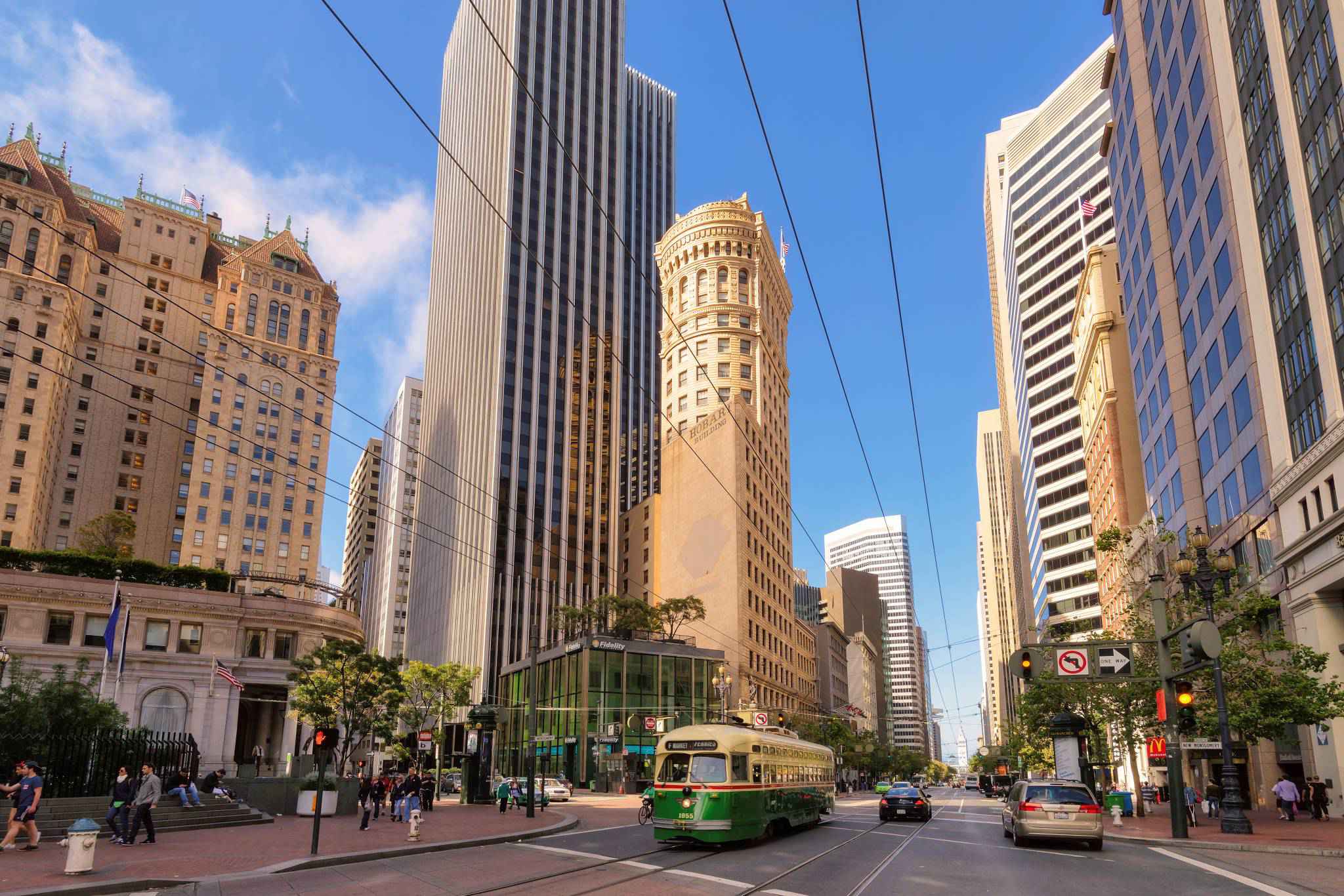 Market Street is a major thoroughfare in San Francisco, California. It begins at The Embarcadero in front of the Ferry Building at the northeastern edge of the city and runs southwest through downtown, passing the Civic Center and the Castro District, to the intersection with Corbett Avenue in the Twin Peaks neighborhood. Beyond this point, the roadway continues as Portola Drive into the southwestern quadrant of San Francisco. Portola Drive extends south to the intersection of St. Francis Boulevard and Sloat Boulevard, where it continues as Junipero Serra Boulevard.

Market Street is the boundary of two street grids. Streets on its southeast side are parallel or perpendicular to Market Street, while those on the northwest are nine degrees off from the cardinal directions.

Market Street is a major transit artery for the city of San Francisco, and has carried in turn horse-drawn streetcars, cable cars, electric streetcars, electric trolleybuses, and diesel buses. Today Muni's buses, trolleybuses, and heritage streetcars share the street, while below the street the two-level Market Street Subway carries Muni Metro and Bay Area Rapid Transit (BART). While cable cars no longer operate on Market Street, the surviving cable car lines terminate to the side of the street at its intersections with California Street and Powell Street.

Festivities
Market Street parades have long marked global events, such as the Panama-Pacific International Exposition, the Preparedness Day bombing of 1916, the parade of the influenza-masked revelers of the first Armistice Day, the 1934 general strike that paralyzed the ports of the Pacific Coast, and the end of World War II. In the days of the first United Nations conferences, Anthony Eden, Molotov, Stettinius, and Bidault rode up Market Street, waving to the crowds of hopefuls.

On Christmas Eve 1910, opera singer Luisa Tetrazzini (for whom the dish Tetrazzini was named) sang a free outdoor concert to a crowd some estimated at 250,000, following a dispute with Oscar Hammerstein. Another historic Market Street event was the New Year's Eve celebration at the Ferry Building on December 31, 1999. Over 1.2 million people jammed Market Street and nearby streets for the raucous and peaceful turn-of-the-century celebration. The San Francisco Gay Pride parade runs down Market Street, attracting many people every year.

Redevelopment
Central Market Community Benefit District extends from Fifth to Ninth Streets, and is considered part of either the "Mid Market" or "South of Market" areas.

On September 29, 2009, traffic-calming efforts took effect for a six-week test in which private automobiles would be restricted in travelling east from Sixth Street towards the Ferry Building. All eastbound traffic will be encouraged to turn right onto 10th Street and then required to do so at 8th Street. Eastbound traffic entering Market from Seventh Street will be required to exit Market at Sixth. These traffic calming efforts are following recenturban planning trends seeking to make streets safer and more pleasant. Drivers failing to comply would face fines. These changes were later made permanent. Planning efforts are currently underway to ban private automobiles from Market Street altogether between Franklin and Steuart Streets, in order to provide a better environment for transit, cyclists, and pedestrians. On August 11, 2015, the city banned private vehicles from turning onto Market Street between Third and Eighth Streets. 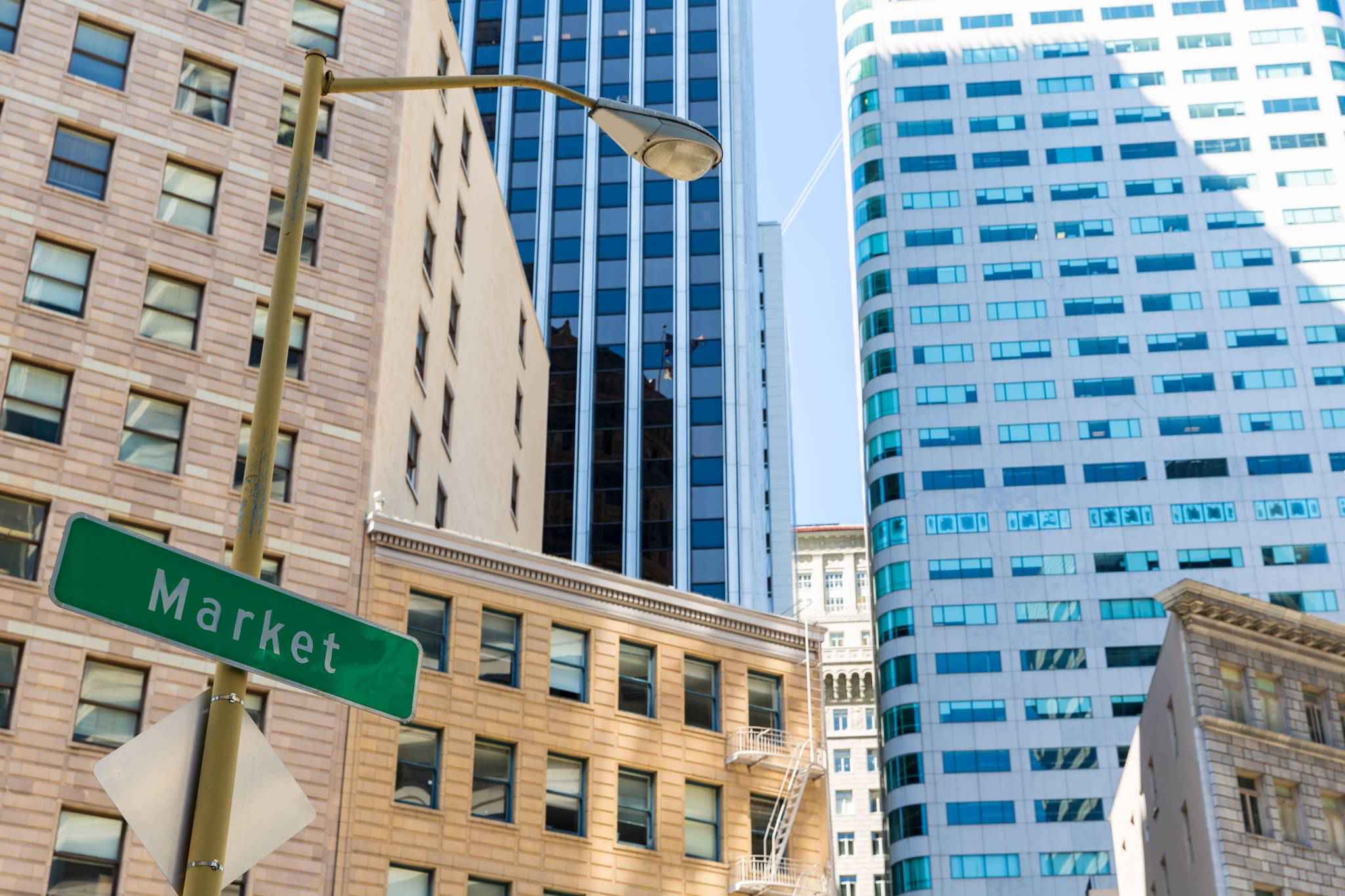