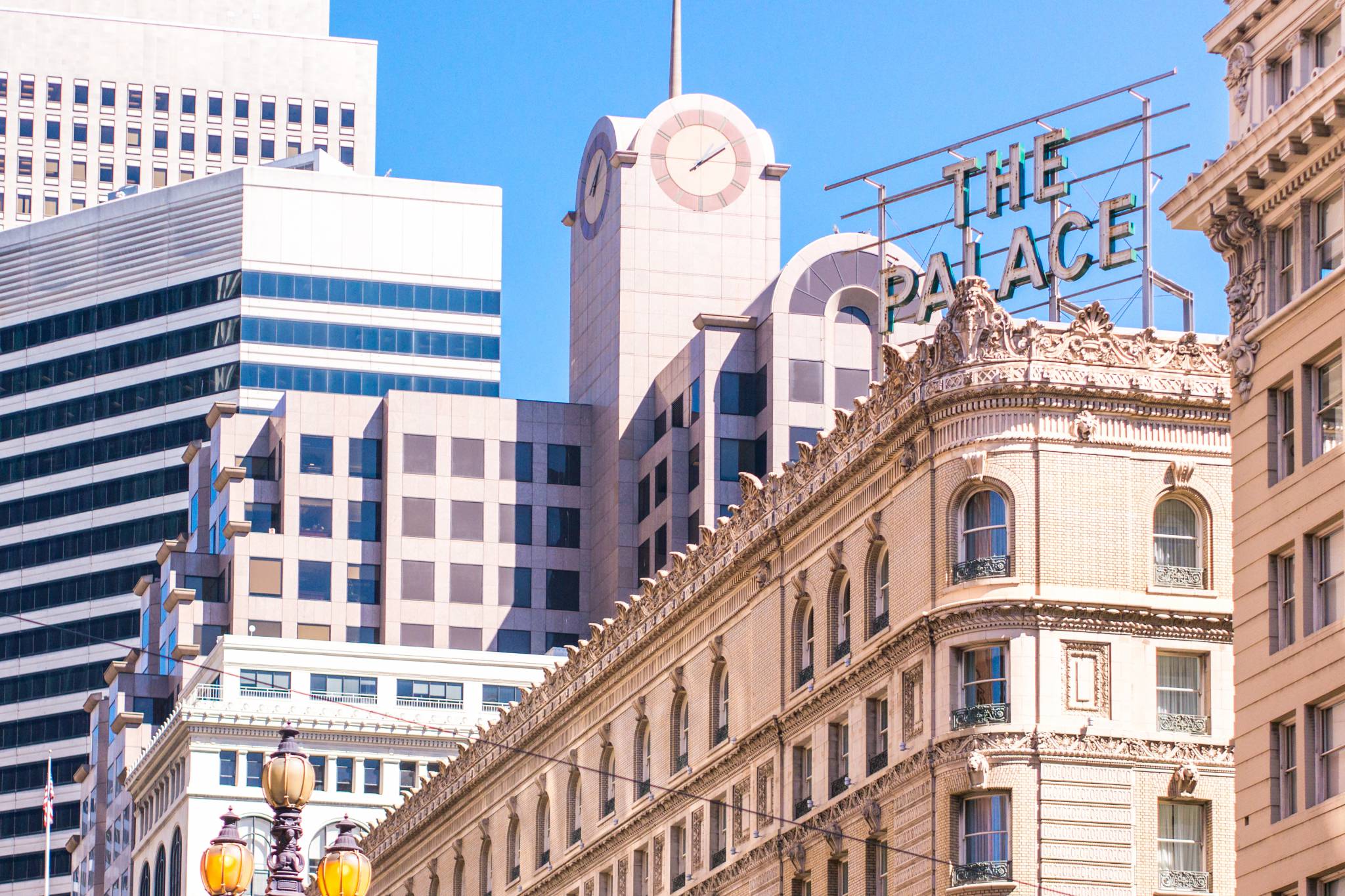 The Palace Hotel is a landmark historic hotel in San Francisco, California, located at the southwest corner of Market and New Montgomery streets. The hotel is also referred to as the "New" Palace Hotel to distinguish it from the original 1875 Palace Hotel, which had been demolished after being gutted by the fire caused by the 1906 San Francisco earthquake.

The present structure opened on December 19, 1909, on the same site as its predecessor. The hotel was closed from January 1989 to April 1991 to undergo a two-year renovation and seismic retrofit. Occupying most of a city block, the now century-old nine-story hotel stands immediately adjacent to both the BART Montgomery Street Station and the Monadnock Building, and across Market Street from Lotta's Fountain.

The Palace Hotel is a member of Historic Hotels of America, the official program of the National Trust for Historic Preservation.

"New" Palace Hotel (opened 1909)
Completely rebuilt from the ground up, the "New" Palace Hotel opened on December 19, 1909, and quickly resumed the role of its namesake predecessor as an important San Francisco landmark as well as host to many of the city's great events. While externally much plainer than the original Palace, the new "Bonanza Inn" is in many ways as elegant, sumptuous, and gracious on the inside as the 1875 building. The "Garden Court" (also called the "Palm Court") — which occupies the same area that the Grand Court did in the earlier structure — has been one of San Francisco's most prestigious hotel dining rooms since the day it opened.

Equally famous was the "Pied Piper" Bar located just off the gleaming polished marble lobby, which was dominated by Maxfield Parrish's 16-by-6-foot (4.9 by 1.8 m), 250-pound (110 kg) painting of the same name.

The Ralston Room, named for co-founder William Ralston, is off the main lobby to the left of the painting.

The hotel served as the stage for several important events. In 1919, Woodrow Wilson gave speeches in the Garden Court in support of the Treaty of Versailles and the League of Nations. In 1923, Warren G. Harding's term as President ended suddenly when he died at the Palace Hotel, in Room 8064, an eighth floor suite that overlooks Market Street. In 1945, the Palace Hotel hosted a banquet to mark the opening session of the United Nations.

The Sheraton-Palace Hotel closed on January 8, 1989 for a $150 million restoration that garnered national media attention and numerous awards. It reopened on April 3, 1991, as the Sheraton Palace Hotel, without the hyphen in its name. The Sheraton Palace was placed in The Luxury Collection division of ITT Sheraton when it was founded in 1992. The hotel dropped the Sheraton name in 1995, becoming again the Palace Hotel. In 1997, the finale of the David Fincher film The Game, starring Michael Douglas, was shot in the hotel's Garden Court.

A 60 story, 204 to 207 m (669 to 679 ft) residential tower addition was proposed in 2006, to be named the Palace Hotel Residential Tower, designed by the architecture firm Skidmore, Owings & Merrill. Construction never began, due to the global financial crisis that hit in 2008.

The hotel's owners controversially removed the famed Pied Piper mural on March 23, 2013 for sale at a planned auction at Christie's. It was anticipated that the painting might sell for up to five million dollars. In the light of strong public opposition to the painting's removal, however, the hotel's owners relented and instead had the painting cleaned, restored, and returned to the bar where it was rehung with considerable fanfare on August 22, 2013.

In 2015 the hotel underwent an extensive renovation to its guest rooms, indoor pool and fitness center, lobby, promenade, and The Garden Court, and also became part of the Marriott chain when Marriott acquired Starwood. In 2016, the Palace was named the Best Historic Hotel in the over 400 guest room category by Historic Hotels of America, an initiative of the U.S. National Trust for Historic Preservation. 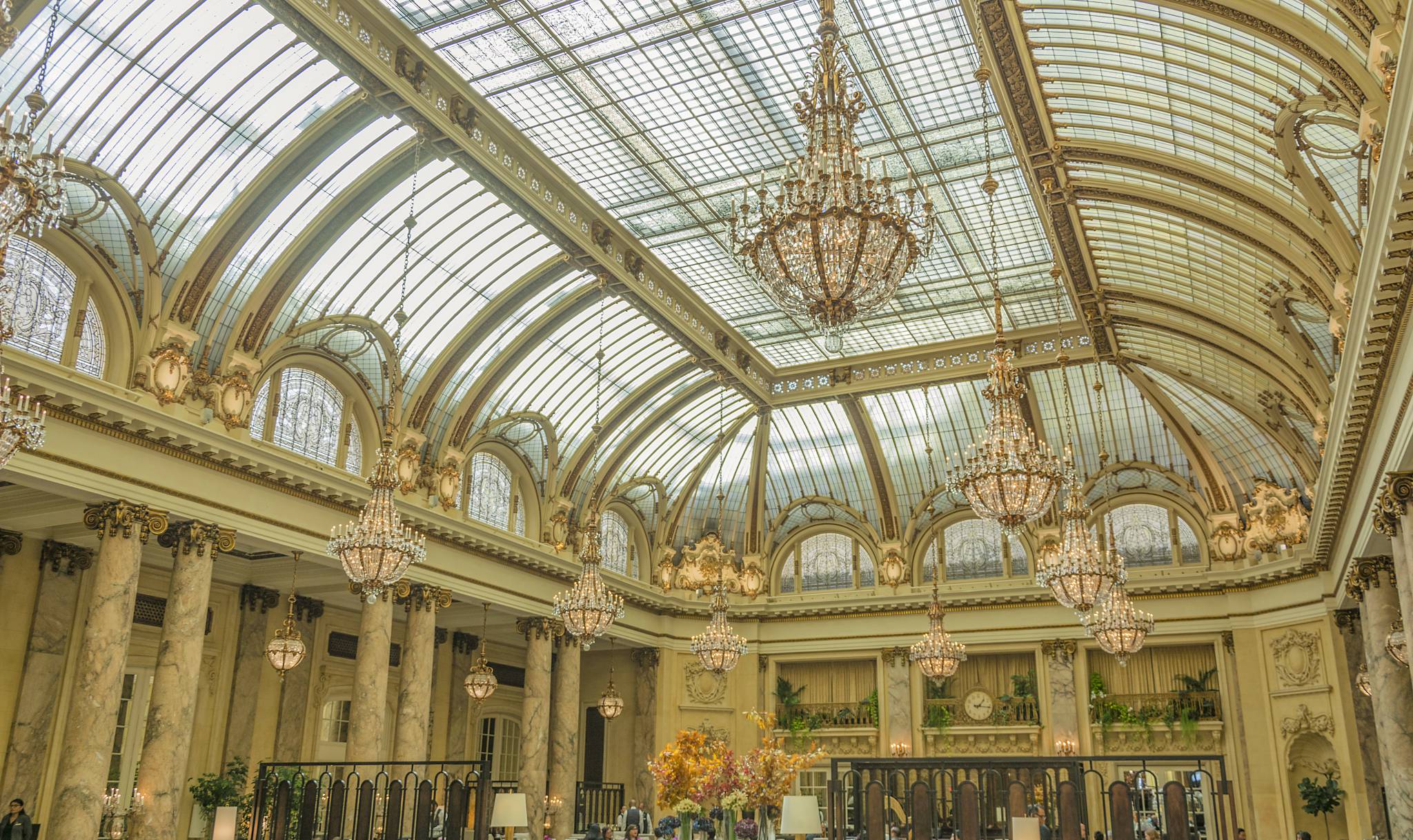