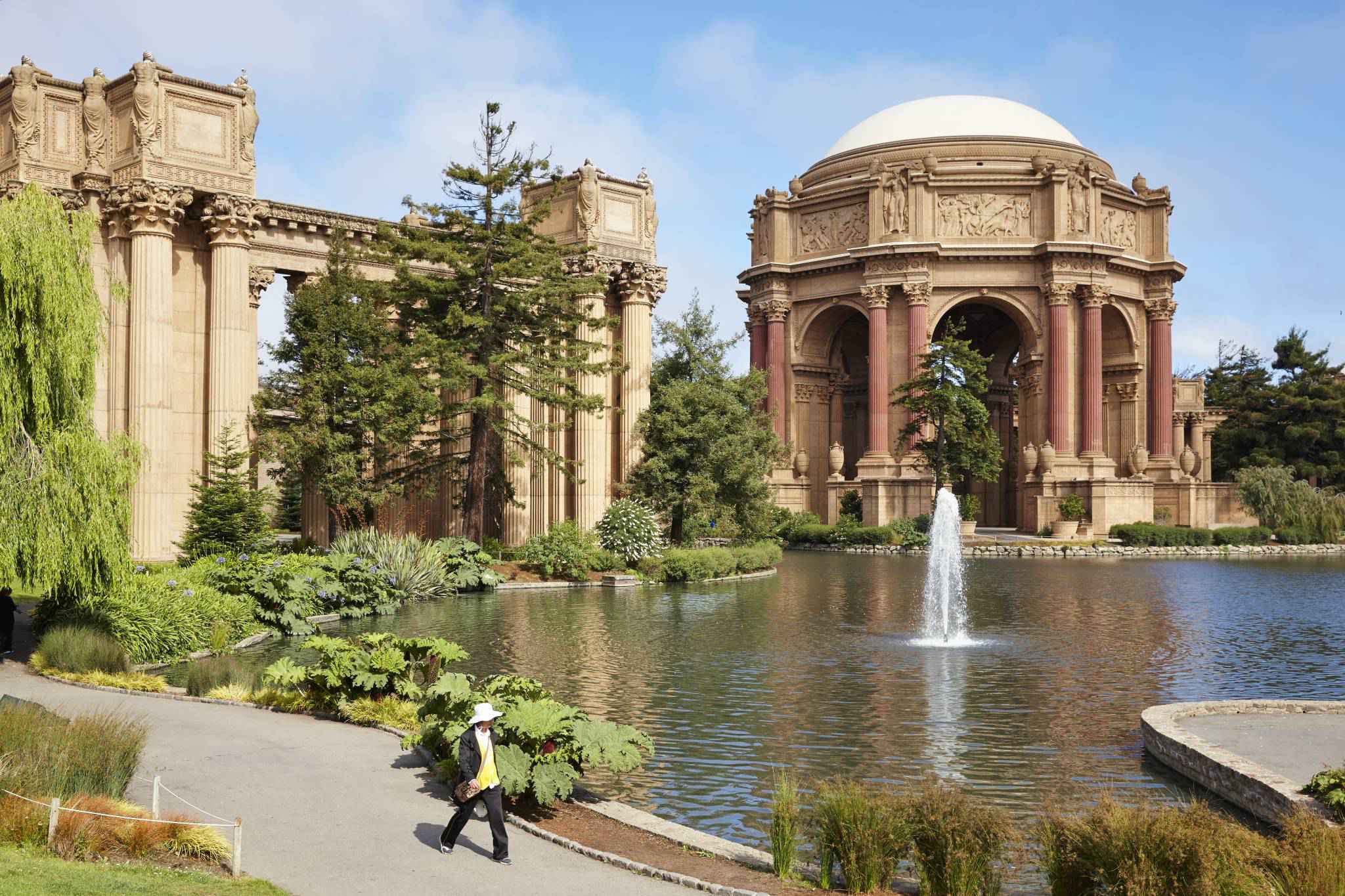 The Palace of Fine Arts in the Marina District of San Francisco, California, is a monumental structure originally constructed for the 1915 Panama-Pacific Exposition in order to exhibit works of art presented there. One of only a few surviving structures from the Exposition, it is still situated on its original site. It was rebuilt in 1965, and renovation of the lagoon, walkways, and a seismic retrofit were completed in early 2009.

In addition to hosting art exhibitions, it remains a popular attraction for tourists and locals and is a favorite location for weddings and wedding party photographs for couples throughout the San Francisco Bay Area and such an icon that a miniature replica of it was built in Disney's California Adventure in Anaheim.

Today, Australian eucalyptus trees fringe the eastern shore of the lagoon. Many forms of wildlife have made their home there including swans, ducks , geese, turtles, frogs, and raccoons.

Design
Built around a small artificial lagoon, the Palace of Fine Arts is composed of a wide, 1,100 ft (340 m) pergola around a central rotunda situated by the water. The lagoon was intended to echo those found in classical settings in Europe, where the expanse of water provides a mirror surface to reflect the grand buildings and an undisturbed vista to appreciate them from a distance.

Ornamentation includes Bruno Louis Zimm's three repeating panels around the entablature of the rotunda, representing "The Struggle for the Beautiful", symbolizing Greek culture. while Ulric Ellerhusen supplied the weeping women atop the colonnade and the sculptured frieze and allegorical figures representing Contemplation, Wonderment and Meditation.
The underside of the Palace rotunda's dome features eight large insets, which originally contained murals by Robert Reid. Four depicted the conception and birth of Art, "its commitment to the Earth, its progress and acceptance by the human intellect," and four the "golds" of California (poppies, citrus fruits, metallic gold, and wheat).

Other surviving buildings of the exhibition
The Palace of Fine Arts was not the only building from the exposition to survive demolition. The Japanese Tea House (not to be confused with the Japanese Tea House that remains in Golden Gate Park, which dates from an 1894 fair) was purchased in 1915 by land baron E.D. Swift and was transported by barge down the Bay to Belmont, California where it stands to this day. The Wisconsin and Virginia buildings were relocated to Marin County. The Ohio building was shipped to San Mateo County, where it survived until the 1950s. The Column of Progress stood for a decade after the close of the Exhibition, but was then demolished to accommodate traffic on Marina Boulevard. Although not built on the exhibition grounds, the only other structure from it still standing in its original location is the San Francisco Civic Auditorium, known now as the Bill Graham Civic Auditorium.

The Legion of Honor Museum, in Lincoln Park, is a full-scale replica of the French Pavilion at the 1915 Panama Pacific International Exposition, which in turn was a three-quarter-scale version of the Palais de la Légion d'Honneur also known as the Hôtel de Salm in Paris by George Applegarth and H. Guillaume. At the close of the exposition, the French government granted Alma Spreckels permission to construct a permanent replica of the French Pavilion, but World War I delayed the groundbreaking until 1921. 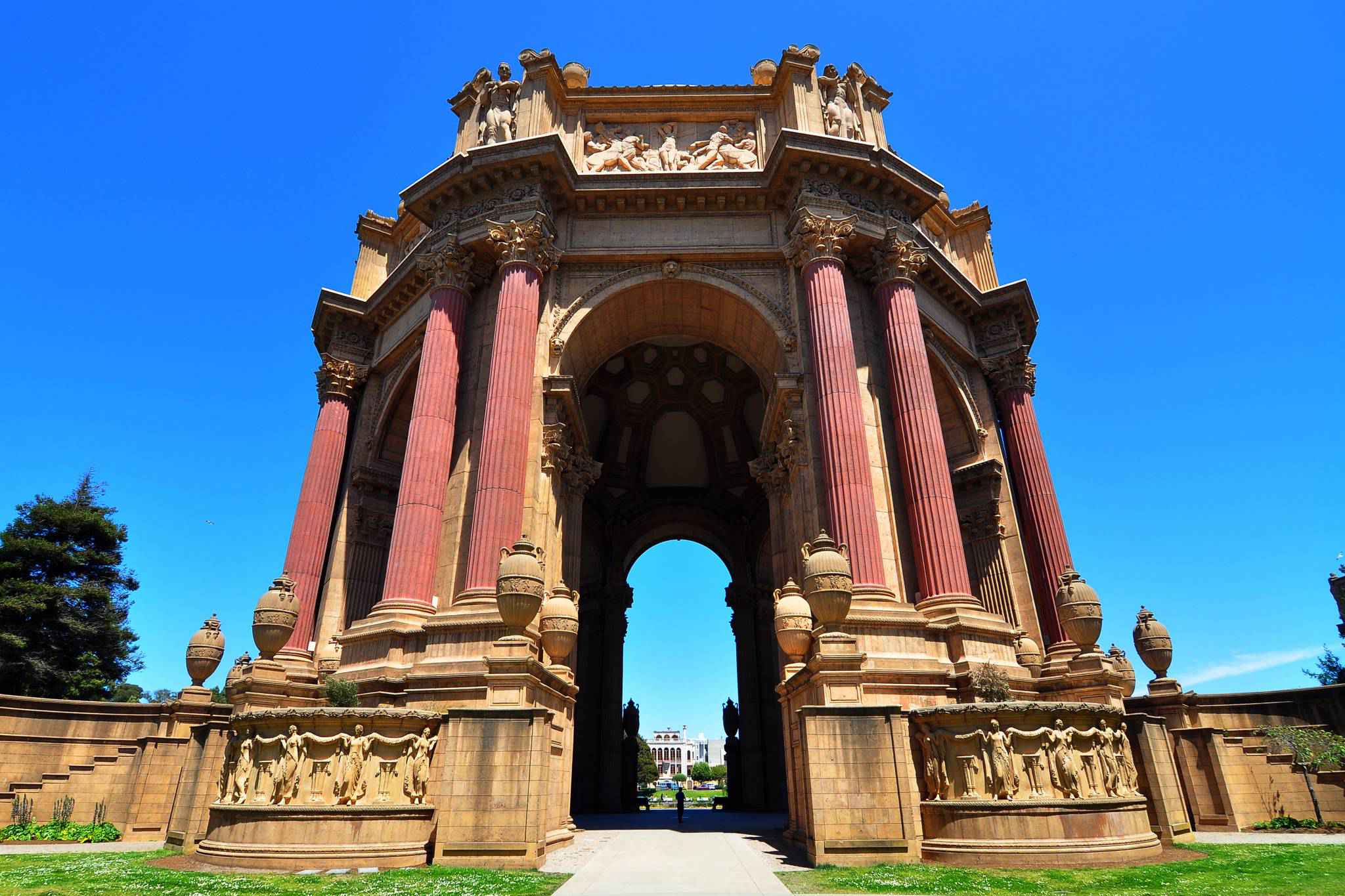