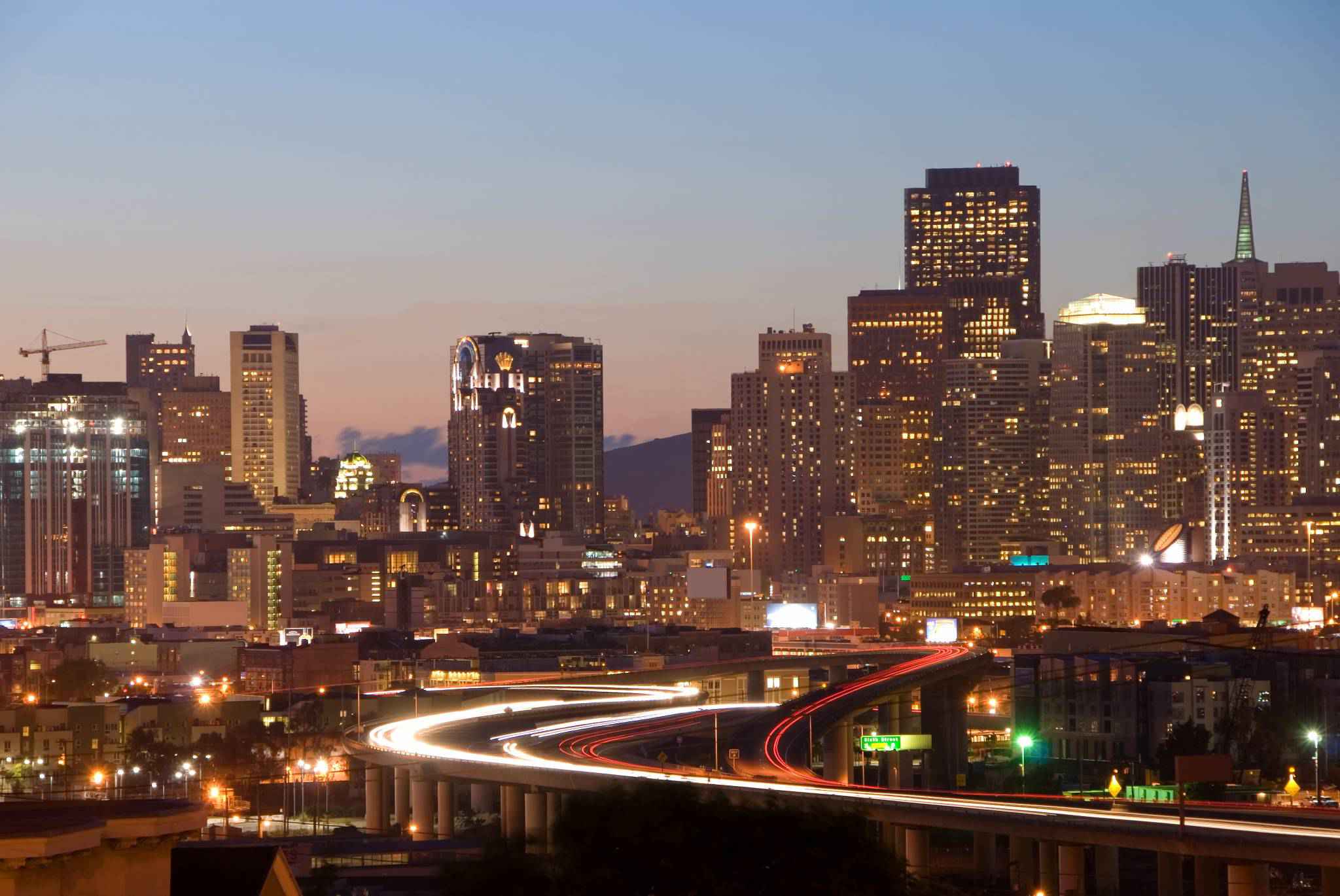 Potrero Hill is a residential neighborhood in San Francisco, California. It is known for its views of the San Francisco Bay and city skyline, its close proximity to many destination spots, its sunny weather, and for having two freeways and a Caltrain station.

A working-class neighborhood until gentrification in the 1990s, it is now an upper-middle-class, family-oriented neighborhood.

Potrero Hill is located on the eastern side of the city, east of the Mission District and south of SOMA and the newly designated district Showplace Square. It is bordered by 16th Street to the north, Potrero Avenue and U.S. Route 101 (below 20th Street) to the west and Cesar Chavez Street to the south. The city of San Francisco considers the area below 20th Street between Potrero Ave and Route 101 to be part of Potrero Hill as well, as outlined in the Eastern Neighborhood Plan.
The area east of Highway 280 is Dogpatch. Dogpatch was originally part of Potrero Nuevo and its history is closely tied to Potrero Hill. Some consider Dogpatch to be its own neighborhood while others disagree. Dogpatch has its own neighborhood association but shares merchant association, Democratic caucuses, and general neighborhood matters with Potrero Hill.

Characteristics
Potrero Hill is one of the sunniest neighborhoods in San Francisco, located on the eastern side of the peninsula and flanked by the San Francisco Bay. It is insulated from the fog and chill of the Pacific Ocean that is typical on the western side of the city. It is a residential neighborhood and not considered a tourist destination. Although it is not the most walkable neighborhood in San Francisco due to its hills, it is generally considered a very convenient location due to its proximity to offices, shopping, dining, entertainment, freeways and a Caltrain station. Despite being surrounded by busy neighborhoods, and featuring a thriving commercial area on 18th St., Potrero Hill is generally quiet and sleepy.

Potrero Hill started as a Caucasian working-class neighborhood in the 1850s. Its central location attracted many working professionals during the dot-com era in the 1990s. Today, it is mostly an upper-middle-class family-oriented neighborhood. In addition to the 101 and 280 Interstate freeways, Caltrain also runs through this area, making it popular with commuters. Many homes in Potrero Hill have views of the downtown skyline, the San Francisco Bay or Twin Peaks.

Potrero Hill has a North and a South Slope, with the North Slope generally more coveted due to its proximity to downtown. There is no clear dividing line between North and South as the hill apexes in various places. The demographics of the two are mostly similar with the exception of two public housing projects (Potrero Terrace and Potrero Annex) situated on the South Slope. The projects occupy over one third of the South Slope. The poorly designed, curvy and diagonal grids of the housing projects isolate their residents from the greater neighborhood.

Hotbed for artists and LGBT
In the 1960s many artists and members of the lesbian, gay, bisexual, and transgender (LGBT) community began to move to Potrero Hill, drawn by its location and affordable rent. Many artist studios, showrooms and art schools were set up nearby in response to Potrero Hill's explosion as a creative hub. The city has since designated the collection of designer warehouses, art schools, and showrooms just north of Potrero Hill as a special light-industrial district and named this area the Showplace Square.
Potrero Hill experienced a brief economic decline in the late '80s/early '90s due to the recession, which especially hit the working-class and art communities hard. However, things rapidly picked up starting in the mid-90s, led by the dot-com boom.

Dot-com and gentrification
With its close proximity to offices in SOMA, Financial District, and Multimedia Gulch (Mission District bordered by 16th St, Potrero Ave, Folsom St, and 20th St.), and the burgeoning night life and dining in the Mission District, SOMA, and its own 18th St. corridor, Potrero Hill, along with its neighboring Mission District, drew many high-tech professionals in the dot-com era, driving up real estate prices and rent. Up until 2015, it was home to the American headquarters for major game publisher SEGA. The neighborhood saw a drastic change from mostly working-class to mostly white-collared professionals. Unlike the Mission District, which is populated with renters who had to contend with raising rents and evictions, long-time residents in Potrero Hill have accepted gentrification, primarily as these homeowners benefit from the raise in real estate values.

Modern era
The neighborhood is still in the midst of change and transformation with the implementation of the city's Eastern Neighborhood Plan, the redevelopment of Potrero Annex and Potrero Terrace housing projects, and its neighboring Mission Bay's development into a bio-technology hub.

Attractions
The hub of Potrero Hill is the 18th Street corridor that features many trendy restaurants. Farley's Cafe is a favorite gathering spot and Bloom's Saloon has one of the most dramatic views of downtown San Francisco. Mission Hill Saloon, located on the corner of Potrero Ave. and Mariposa St., was selected as one of the best dive bars in the country.

The stretch of Vermont Street between 20th Street and 22nd Street has many switchbacks, similar to the tourist attraction, Lombard Street, known as "the most crooked street in the world." Vermont Street features a series of seven sharp turns, making it more crooked than better-known Lombard Street. (Vermont, while steeper than Lombard, has one less turn). Bottom of the Hill on 17th Street is a popular live music venue. Football star O.J. Simpson once lived in the public housing projects on the southeastern side of the hill. 18th Street runs through the heart of the north side of the hill and is home to three blocks that serve as the primary shopping and dining spot in the neighborhood. The powder blue water tower, located near 22nd Street and Wisconsin Street, was demolished in mid-2006 (as part of a seismic upgrade and due to the fact that it was no longer needed). The main campus of the California Culinary Academy is located at 350 Rhode Island Street. The facilities include professional kitchens, student-staffed restaurants, lecture classrooms, a library, and culinary laboratory. At the foot of Potrero Hill is the Graduate School campus of the California College of the Arts and the CCA Wattis Institute for Contemporary Arts, located near the San Francisco campus in a new facility on Kansas St., a forum for leading-edge contemporary culture.

Potrero Hill is also the home of many famous companies. The Anchor Brewing Company, operates a brewery and distillery. It is one of the last remaining breweries to produce California Common beer, also known as Steam Beer, a trademark owned by the company. Located on Mariposa Street, between Carolina and DeHaro Streets, the building was previously owned by the washing machine heir Fritz Maytag. Anchor Brewery offers free tours on weekdays with free beer tasting. It is recommended to book the tour months in advance. SEGA of America, the American publishing arm for one-time gaming giant SEGA, operated out of an office on Rhode Island St. The large SEGA sign can still be seen from US 101 to this day.

The Potrero Hill Neighborhood House, known as "the NABE," is another focal point. It sits at the top of de Haro Street, at Southern Heights Street, and offers various community services. It was designed by noted architect, Julia Morgan and has an incredible view of San Francisco, the Bay and the East Bay.

The headquarters for popular Discovery Channel program Mythbusters is located at the southern edge of the neighborhood.

Two freeways run through Potrero Hill, U.S. Route 101 on the western side, Interstate 280 on the eastern side. Caltrain's 22nd Street station is on the eastern edge of the hill, and the San Francisco Municipal Railway provides bus service in the area (the 19-Polk, 22-Fillmore, 10-Townsend and 48-Quintara - 24th St) and the new light rail service, completed in 2006, on 3rd Street (the T-Third Street).