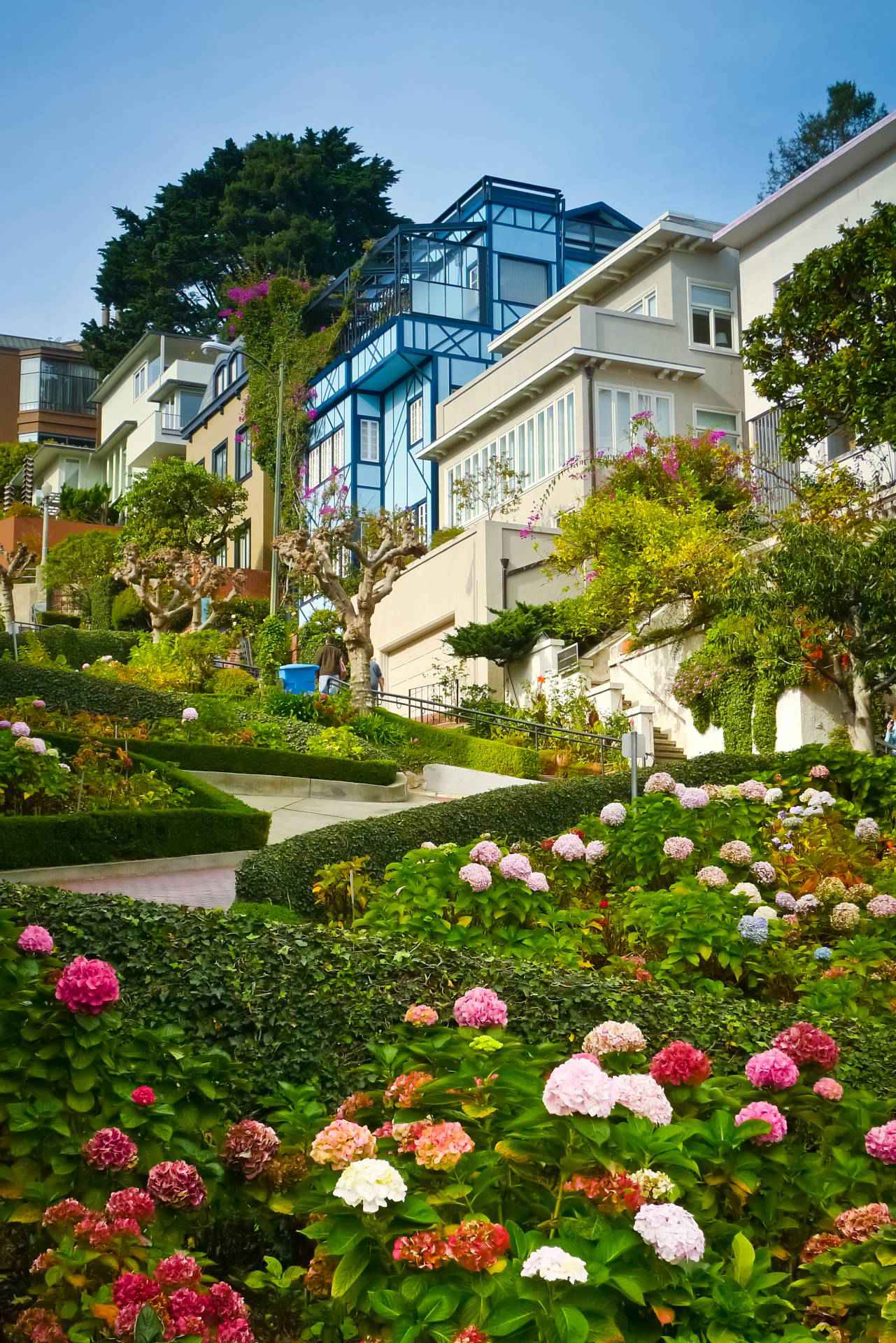 Russian Hill is a neighborhood of San Francisco, California, in the United States. It is named after one of San Francisco's 44 hills, and one of its original "Seven Hills".

Russian Hill is directly to the north from Nob Hill, to the south (uphill) from Fisherman's Wharf, and to the west of the North Beach neighborhood. The Hill is bordered on its west side by parts of the neighborhoods of Cow Hollow and the Marina District.

At the northern foot of the hill is Ghirardelli Square, which sits on the waterfront of the San Francisco Bay, Aquatic Park, and Fisherman's Wharf, an extremely popular tourist area. A trip down the winding turns of Lombard Street and across Columbus Avenue to the east leads to the neighborhood of North Beach. Down the hill to the west, past Van Ness Avenue, are Cow Hollow and the Marina districts.

Noteworthy characteristics
The neighborhood is most famous for Lombard Street, the one-way section on Russian Hill between Hyde and Leavenworth Streets, in which the roadway has eight sharp turns (or switchbacks) that have earned the street the distinction of being "the crookedest street in the world". The switchbacks design, first suggested by property owner Carl Henry and instituted in 1922, was born out of necessity in order to reduce the hill's natural 27% grade, which was too steep for most vehicles to climb. As it is one of the most famous tourist attractions in the city, this section of the neighborhood is frequently crowded with tourists. Tourists also frequent the famous cable car line along Hyde Street, which is lined with many restaurants and shops.

A small park at the top of the hill on Vallejo Street features a small plaque and memorial placed by the Russian Government that is dedicated to the original Russian cemetery that is the neighborhood's namesake.

Another park is named after Ina Coolbrith.

Views from the top of the hill extend in several directions around the Bay Area, including the Bay Bridge, Marin County, the Golden Gate Bridge and Alcatraz. Russian Hill is home to the San Francisco Art Institute, located on Chestnut Street between Jones and Leavenworth Streets. Academy of Art University also maintains a presence in this neighborhood with their Chestnut St. building hosting their fine art MFA studios, photo classrooms, and photo studios.

Because of the steepness of the hill, many streets, portions of Vallejo and Green streets, for example, are staircases. Another famous feature of Russian Hill are the many pedestrian-only lanes such as Macondray Lane and Fallon Place, both with beautiful landscaping and arresting views.

Alice Marble Tennis Courts are four hardcourt tennis courts located at Lombard and Hyde Streets. The courts offer a view of the bay and North Beach and can be unsuitable for tennis on windy days. A basketball court is located adjacent to the tennis courts. The San Francisco Cable Cars serving the Powell-Hyde line stops nearby.