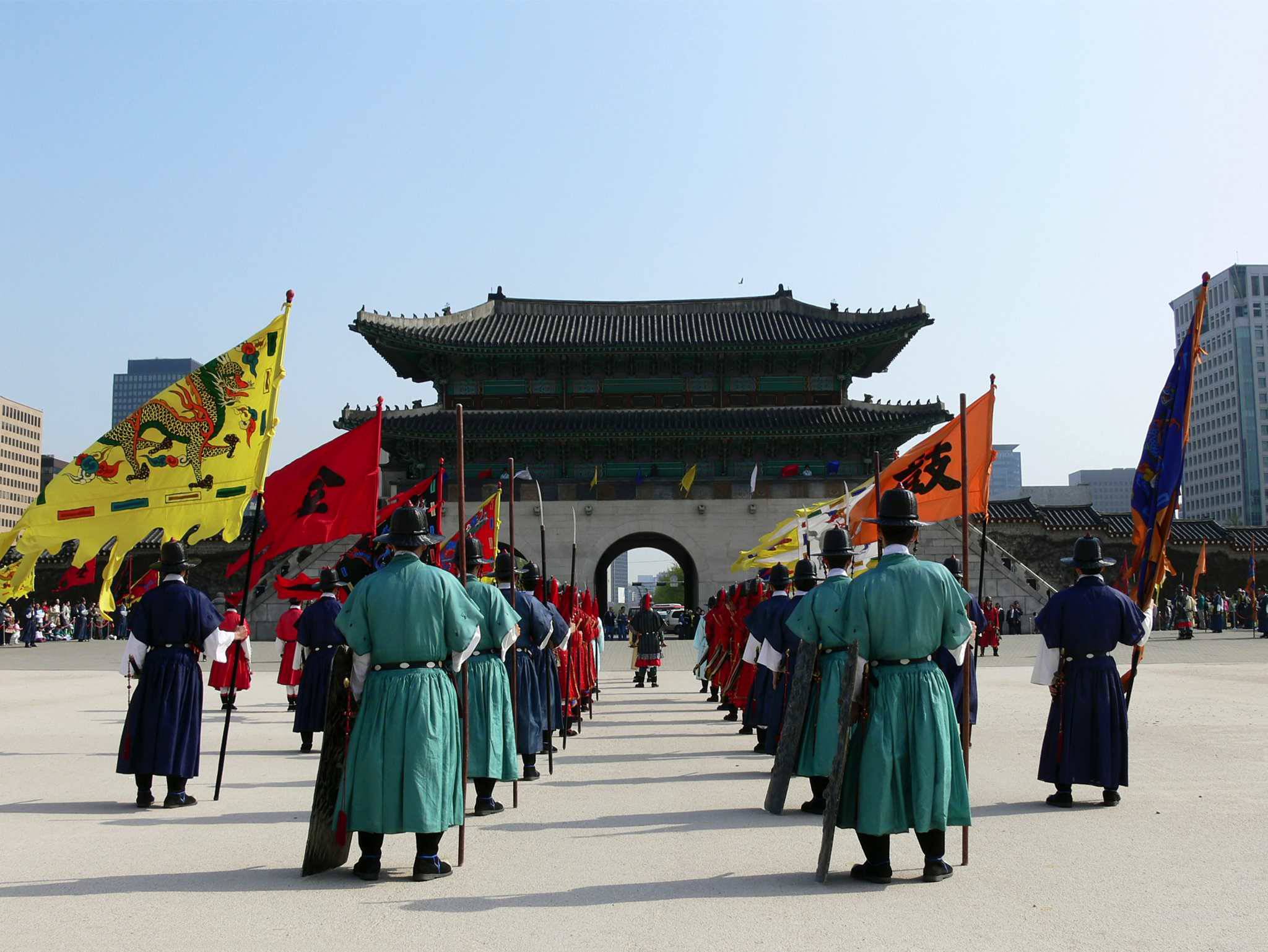 
Changdeokgung, also known as Changdeokgung Palace or Changdeok Palace, is set within a large park in Jongno-gu, Seoul, South Korea. It is one of the "Five Grand Palaces" built by the kings of the Joseon Dynasty and because of its location east of Gyeongbok Palace, Changdeokgung, with Changgyeongung, is also referred to as the East Palace (東闕, Donggwol). The literal meaning of Changdeokgung (昌德宮) is "Palace of Prospering Virtue".

Changdeokgung was the most favored palace of many princes of the Joseon Dynasty and retained many elements dating from the Three Kingdoms of Korea period that were not incorporated in the more contemporary Gyeongbokgung. One such element is the fact that the buildings of Changdeokgung blend with the topography of the site instead of imposing upon nature.

Changdeokgung, like the other Five Grand Palaces in Seoul, was heavily destroyed during the Japanese occupation of Korea. Currently, only 30% of the Palace structures remain.

Changdeokgung was the second palace after Gyeongbokgung which had been established in 1395 as a primary palace. In the midst of strife for the throne between princes and vassals, authority of Gyeongbokgung was deteriorated. King Jeongjong enthroned by Prince Yi Bang-won moved the capital to Gaegyeong, the one of Goryeo dynasty, again in 1400 on the pretext of superior geographical features of it, in fact, in order to avert the power struggle. Taejong (Yi bang-won) soon taking over the throne returned to Hanseong (present-day Seoul) had a new palace named Changdeokgung instead of Gyeongbokgung because he had killed his half brothers in Gyeongbokgung whose construction was led by Jeong Do-jeon, the king's rival before. Construction of Changdeok Palace began in 1405, and was completed in 1412. King Seonjo expanded the palace grounds by about 500,000 square meters.

Today there are 13 buildings remaining on the palace grounds and 28 pavilions in the gardens, occupying 110 acres (45 hectares) in all and the area is designated as Historical Site No. 122. Buildings of note include Donhwa-mun (built in 1412, rebuilt in 1607, with a copper bell weighing 9 short tons or 8 metric tons), Injeong-jeon (main hall), Seongjeong-jeon (auxiliary office in the main hall), Huijeong-dang (the king's private residence, later used as a conference hall), Daejo-jeon (living quarters), and Nakseon-jae (former residence of Korean imperial family including Princess Bangja).

The palace was built between Peak Maebong of Mt. Bugaksan in the back and Rivulte Geumcheon having flowing in the front influenced by the principle "baesanimsu" (배산임수) in Feng Shui theory. Contrary to Gyeongbokgung whose main buildings are arranged in accurate architectural principle, however, buildings in Changdeokgung are disposed more freely without a regular system. Though its structure seems chaotic at a glace, all buildings are in harmony with the environment surrounding them.

Changdeokgung consists of governmental area (治朝, chijo) centering on Injeongjeon and Seonjeongjeon, royal private area (寢殿, chimjeon, meaning 'a house of king's bedroom'), Nakseonjae area in the east, and Huwon beyond the north hills. Most of major official buildings such as Injeongjeon, main hall of Changdeokgung, Seonjeongjeon, king's office, and many of government offices (궐내각사, gwollaegaksa) are placed in the front parts of the palace, beyond which there are royal private court for king and queen. King's houses like Seonjeongjeon, Huijeongdang, and Nakseonjae are surrounded in many folds of buildings and courts in case any outsider break through. The architetural style of Changdeokgung overall features simplicity and frugality because of confucian ideology.

Donhwamun Gate
- The main palace gate. Built in 1412, Donhwamun has a two-story pavilion-type wooden structure, and is the largest of all palace gates. Donhwamun was burned down during the Japanese invasion of 1592 and was restored in 1608.
Geumcheongyo Bridge
- Oldest bridge still extant in Seoul. Built 1411.
Injeongjeon Hall (National Treasure)
- the throne hall of Changdeokgung, it was used for major state affairs including the coronation of a new king and receiving foreign envoys. Originally built in 1405, it was rebuilt in 1610 after being burned down during the 1592 Japanese invasion, and a third time in 1804 after being destroyed by a fire.
Seonjeongjeon Hall
- An office for ruling officials, the king held daily meetings with ministers, reported on state affairs and seminars here.
Huijeongdang Hall
- Originally the king's bed chamber, it became his workplace after Seonjeongjeon was deemed too small for conducting routine state affairs. The original Huijeongdang was destroyed by a fire in 1917. The reconstructed structure is completely different from the original due to recent Western influences. Wooden floorboards and carpets, glass windows, and chandeliers can be seen inside the building.
Daejojeon Hall
- Official residence of the queen. Destroyed by fire in 1917, it was rebuilt with materials taken from Gyeongbokgung. Daejojeon was used as a residence for the last empress of Joseon, allowing us a glimpse into the final years of the royal household of the Joseon Dynasty.
Juhamnu Pavilion (Kyujanggak)
- Royal libraries stood in this area. State exams were conducted in front of the pavilion on special occasions in presence of the king.
Yeon-gyeongdang Residence
- Built in 1827, it was an audience hall modeled after a typical literati house.

Behind the palace lies the 78-acre (32 ha) Huwon (後苑, Rear garden) which was originally constructed for the use of the royal family and palace women. The garden incorporates a lotus pond, pavilions, and landscaped lawns, trees, and flowers. The surroundings and the palace itself are well matched. There are over 26,000 specimens of a hundred different species of trees in the garden and some of the trees behind the palace are now over 300 years old. The garden that was extremely private space for the king had been called 'Geumwon'(禁苑, Forbidden garden) because even high officials could not dare to come in without king's permission. Also it had been called 'Naewon'(內苑, 'Inner garden'). Today koreans often call it 'Biwon'(秘院, Secret garden) which derived from the office of same name in the late 19C. Though the garden had many another names, the name most frequently used through Jeseon dynasty period was 'Huwon'.

A variety of ceremonies host by the king were held in Huwon. In early period of Joseon dynasty, military inspections participated with king himself had been practiced many times. King Sejo had troops parade and array before him or commanded them by himself in the garden. In addition, giving feasts, playing archery games, or enjoy fireworks in Huwon.

The Ongnyucheon ("Jade Stream") area is of particular interest. It contains a U-shaped water channel carved in 1636 for floating wine cups, with a small waterfall and an inscribed poem on the boulder above it. The area also contains five small pavilions. 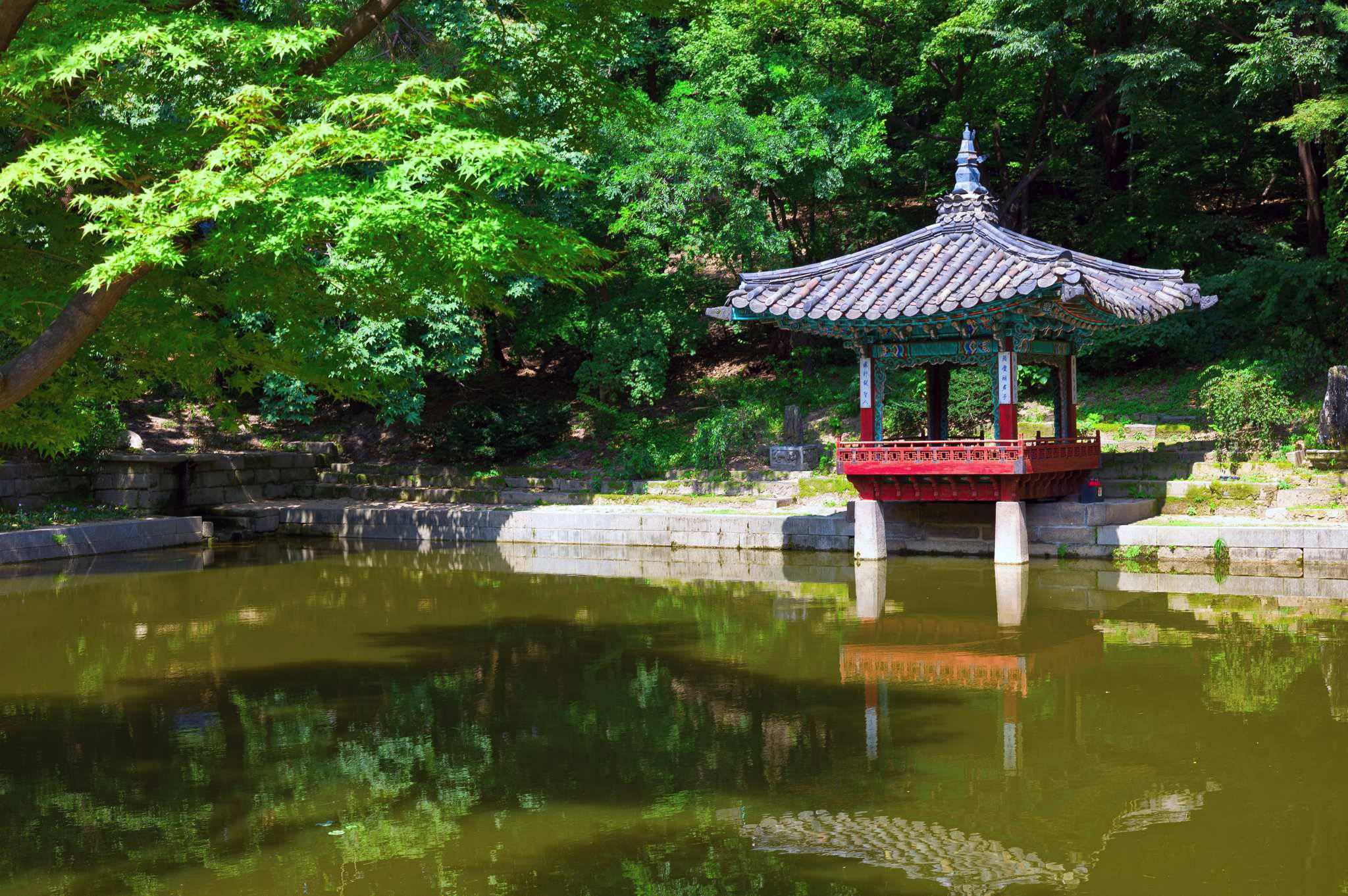