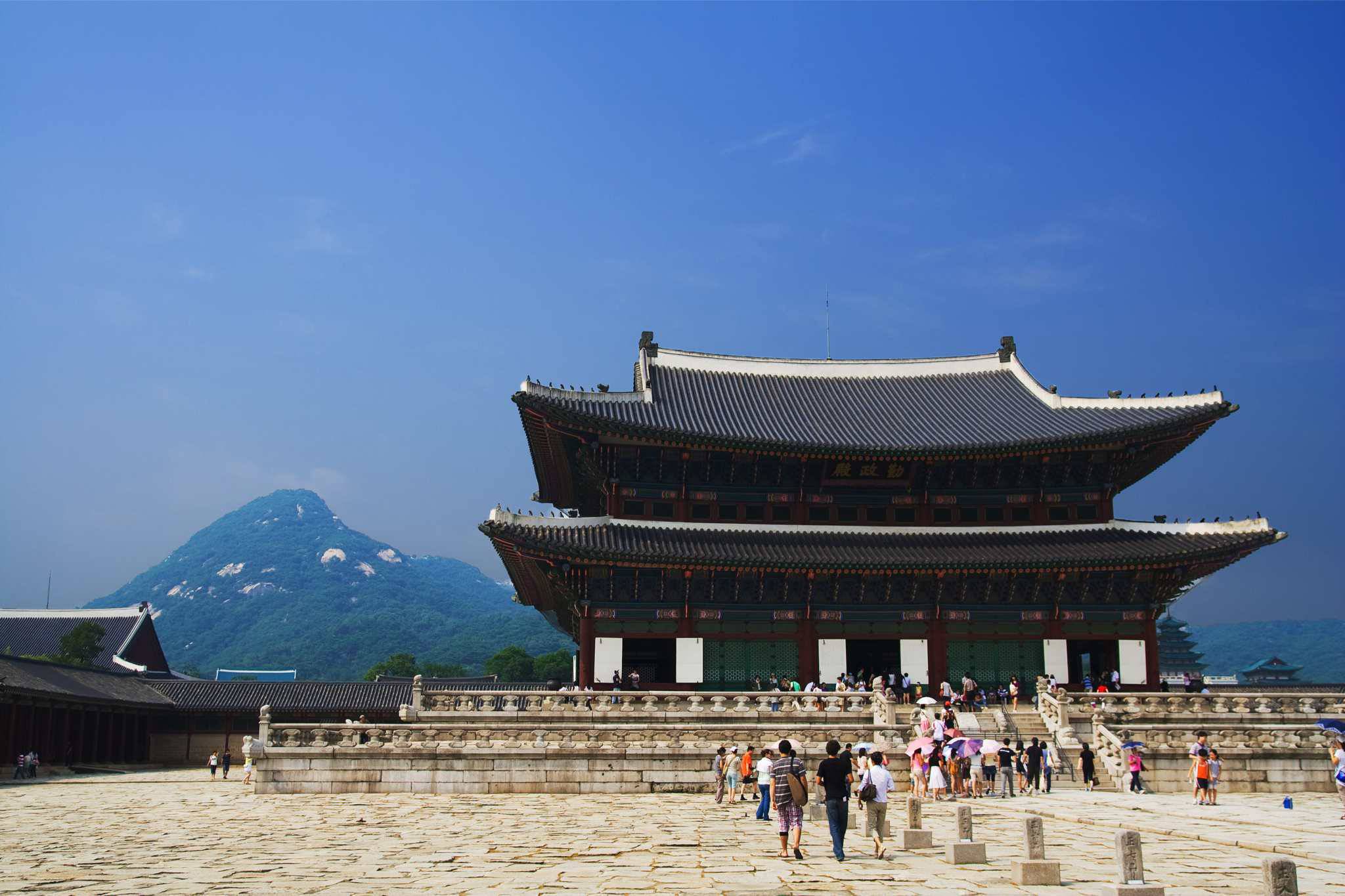 
Changgyeong Palace is a palace located in Seoul, South Korea. Originally the Summer Palace of the Goryeo Emperor, it later became one of the Five Grand Palaces of the Joseon Dynasty.

The palace was originally built as "Suganggung" by King Sejong for his father, Taejong, but in 1483 renovated and enlarged by King Seongjong at which time it received its current name.

Composition and buildings
Today its main points of interest are as follows:

Honghwamun (main gate)
- The palace's main gate faces eastward like the central part of the palace. First built in 1484, it burned down during the Japanese invasion of 1592 and was rebuilt in 1616. A ball pavilion (sipjagak) was built on either side of this two-tiered wooden gate. As you pass through the gate, Okcheongjo Bridge comes into view. Between the arches under the bridge's parapet are carved goblins (dokkaebi) that are intended to ward off evil spirits. Okcheongjo Bridge was built approximately 500 years ago and serves as a symbolic entry to the courtyard. Honghwamun is designated as National Treasure 384.

Okcheongyo (bridge)
- The bridge was built in 1483. It is 9.9 meters long by 6.6 meters wide and supported by twin arches. Between the arches under the bridge's parapet are carved goblins (dokkaebi) that are intended to ward off evil spirits. Okcheongjo Bridge serves as a symbolic entry to the courtyard. Okcheongyo Bridge is designated as National Treasure 386.

Myeongjeongjeon (main hall)
- Myeongjeongjeon is the main hall of the palace, where state affairs such as meetings with officials and royal banquets were held. First built in 1484, it was burned down during the Japanese invasion of 1592. Rebuilt in 1616, it is the oldest main hall of all the palaces in Seoul. It is smaller than the two-story main halls of Gyeongbokgung and Changdeokgung because it was originally built as living quarters, especially for dowager queens, rather than as a throne hall. Although it is a simple, one-story structure, Myeongjeongjeon was built on an elevated stone yard that imbued it with the dignity of a main hall. Running through the courtyard in front is a three-level walkway whose center path was for the king's use only. Surrounding the entire area is a wall-like structure of single-room units which were used by the royal guards or for royal funerals. Myeongjeongjeon is designated as National Treasure 226.

Munjeongjeon (council hall)
- Munjeongjeon is a council hall where the king dealt with routine state affairs. Unlike the throne hall, which faces east, this building faces south. Such a palace layout with a secondary structure facing a different direction than a throne hall is highly unusual in Korea. Munjeongjeon was also used to enshrine royal tablets after funerals. It was dismantled during the Japanese occupation. Munjeongjeon as it stands today was restored in 1986 along with Munjeongjeon Gate and the eastern part of the roofed corridor. According to the nineteenth-century "Painting of the Eastern Palace", Munjeongjeon was partitioned from Sungmundang and Myeongjeongjeon by a wall, and had a small annex; the courtyard was surrounded by a wall-like corridor. This part has not yet been restored.

On May 13, 1762, that courtyard in front of Munjeongjeon witnessed the most tragic incident of the century. It had been reported to King Yeongjo that Crown Prince Sado was mentally ill and behaving erratically. Furious with the Crown Prince, his father ordered him sealed alive in a large rice chest, where he died eight days later at the age of 28. King Yeongjo later became remorseful and gave his son the posthumous title 'Sado' ("thinking in sorrow"). It is believed that Crown Prince Sado was a victim of a conspiracy by his political adversaries.

Sungmundang (hall)
- At Sungmundang Hall, the king threw banquets to discuss state affairs and classical literature. It is believed to have been built under King Gwanghaegun when Changgyeonggung was first rebuilt. Burned down in 1830, it was rebuilt in autumn of the same year. Its foundation was designed to make the hall appear elevated on sloped ground; the base stones for the front columns were made high, while those in the rear were made low. The name of the building "Sungmundang" writen by King Yeongjo still hangs at the entrance.

Haminjeong (pavilion)
- First built in 1633 on the former site of Inyangjeon Hall, Haminjeong as destroyed by fire in 1830 and rebuilt in 1833. The king used this pavilion to receive officials and hold banquets. Haminjeong today is open on all four sides, but as depicted in "Painting of the Eastern Palace", it had walls on three sides.

Tongmyeongjeon (hall)
- first built in 1484, rebuilt most recently in 1834; main building in the Yeonjo area where kings and their families lived. 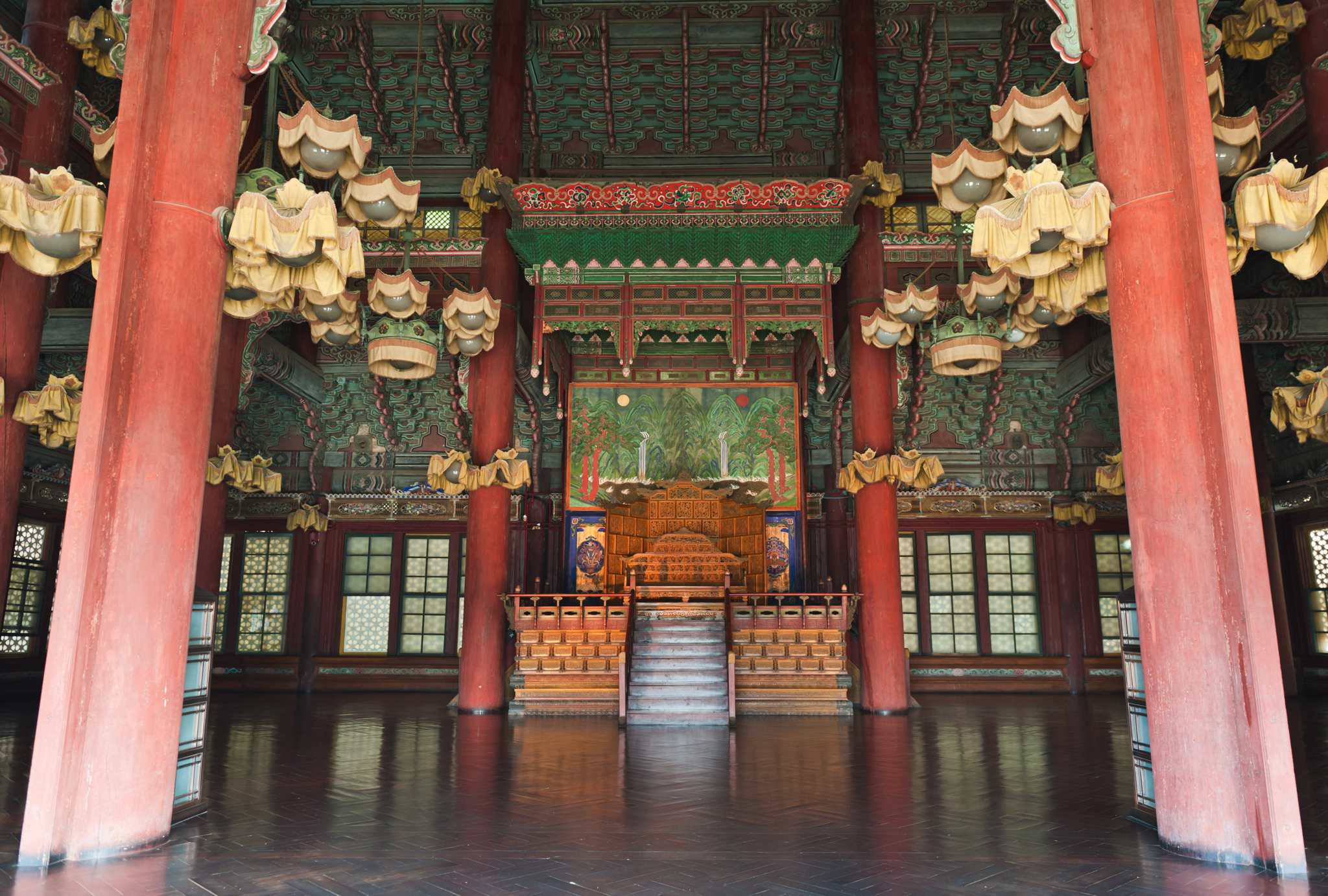