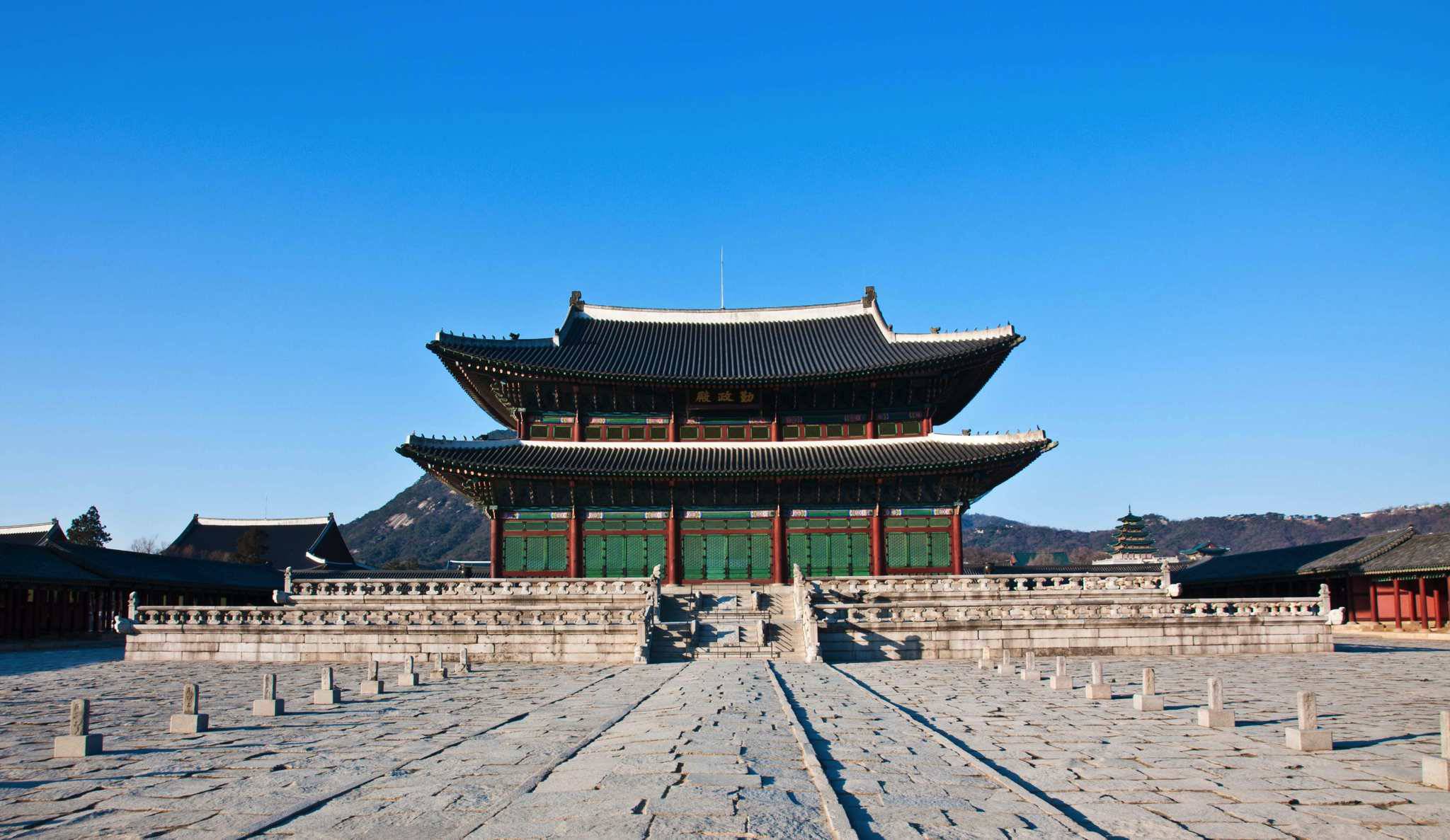 
Gyeongbokgung, also known as Gyeongbokgung Palace or Gyeongbok Palace, is a royal palace located in northern Seoul, South Korea. First constructed in 1394 and reconstructed in 1867, it was the main and largest palace of the Five Grand Palaces built by the Joseon Dynasty. The name of the palace, "Gyeongbokgung," translates in English as "Palace Greatly Blessed by Heaven."

Heavily destroyed by the Japanese government in the early 20th century, the palace complex is slowly being restored to its original form prior the destruction. As of 2009, roughly 40 percent of the original number of palace buildings still stand or are being reconstructed.

Buildings
Gangnyeongjeon
Gangnyeongjeon (Hangul: 강녕전; Hanja: 康寧殿), also called Gangnyeongjeon Hall, is a building used as the king's main sleeping and living quarters. The building contains the king's bed chamber and was first constructed in 1359, the fourth year of King Taejo. Destroyed during the Japanese invasions of Korea in 1592, the building was rebuilt when Gyeongbokgung was reconstructed in 1867, but it was again burned down by a major fire on November, 1876 and had to be restored in 1888 by the orders of King Gojong.
However, when Huijeongdang of Changdeokgung Palace was burned down by a fire in 1917, the Japanese government dismembered the building and used its construction materials to restore Huijeongdang in 1920. The current building was rebuilt in 1994, meticulously restoring Gangnyeongjeon to its original specifications and design.
Gangnyeongjeon consists of fourteen rectangular chambers, each seven chambers located to the left and right side of the building in a layout out like a checkerboard, and corridors. The king used the center chamber while the court attendants occupied the other side chambers to protect, assist, and to receive orders. The building rests on top of a tall stone foundation, and a stone deck or veranda locates in front of the building.

The noted feature of the building is an absence of a top white roof ridge called "yongmaru" in Korean (Hangul: 용마루). Many theories exist to explain the absence, and a prominent theory states that since the king was symbolized as the dragon during the Joseon Dynasty, the yongmaru, which contains the letter dragon or "yong" (龍), cannot rest on top of the king when he is asleep.

Geunjeongjeon
Geunjeongjeon (Hangul: 근정전; Hanja: 勤政殿), also known as Geunjeongjeon Hall, is the throne hall of Gyeongbokgung where the king formally granted audiences to his officials, gave declarations of national importance, and greeted foreign envoys and ambassadors during the Joseon Dynasty. The building was designated as Korea's National Treasure No. 223 on January 8th, 1985.

Geunjeongjeon was originally constructed in 1395 during the reign of King Taejo, but was burned down in 1592 when the Japanese invaded Korea. The present building was built in 1867 when Gyeongbokgung was being reconstructed. The name Geunjeongjeon, created by the minister Jeong Dojeon, means "diligence helps governance."
Constructed mainly of wood, Geunjeongjeon sits on the center of a large rectangular courtyard, on top of a two-tiered stone platform. This two-tiered platform is lined with detailed balustrades and is decorated with numerous sculptures depicting imaginary and real animals, such as dragons and phoenixes. The stone-paved courtyard is lined with two rows of rank stones, called "pumgyeseoks" (Hangul: 품계석; Hanja: 品階石), indicating where the court officials are to stand according to their rank, and is surrounded by wooden cloisters.

Geunjeongmun (Hangul: 근정문; Hanja: 勤政門), aligned and located directly to the south of Geunjeongjeon, is the main gate to the courtyard and to Geunjeongjeon. The gate is divided into three separate aisles and only the king was allowed to walk through the center.

Gyeonghoeru
Gyeonghoeru (Hangul: 경회루; Hanja: 慶會樓), also known as Gyeonghoeru Pavilion, is a hall used to hold important and special state banquets during the Joseon Dynasty. It is an important national landmark registered as Korea's National Treasure No. 224 on January 8th, 1985.

Constructed mainly of wood and stone, Gyeonghoeru has a form where the wooden structure of the building sits on top of 48 massive stone pillars, with the wooden stairs connecting the second floor to the first floor. The outer perimeters of Gyeonghoeru are supported by square pillars while the inner columns are cylinderical; they were placed thus to represent the idea of Yin & Yang. When Gyeonghoeru was originally built in 1412, these stone pillars were decorated with sculptures depicting dragons rising to the sky, but these details were not reproduced when the building was rebuilt in the 19th century. Three stone bridges connect the building to the palace grounds, and corners of the balustrades around the island are decorated with sculptures of the twelve Zodiac animals.

Gyotaejeon
Gyotaejeon (Hangul: 교태전; Hanja: 交泰殿), also called Gyotaejeon Hall, is a building used as the main sleeping and living quarters by the queen during the Joseon Dynasty. The building is located behind Gangnyeongjeon, the king's sleeping quarters, and contains the queen's bed chamber. It was first constructed in around 1440, the 22nd year of King Sejong the Great.

King Sejong, who was noted to have a frail health later in his reign, decided to carry out his executive duties in Gangnyeongjeon, where his bed chamber is located, instead of Sajeongjeon. Since this decision meant many government officials routinely needed to visit and intrude Gangnyeongjeon, King Sejong had Gyotaejeon built in consideration of his wife the queen's privacy.

The building was burned down in 1592 when the Japanese invaded Korea, but was reconstructed in 1867. Nevertheless, when Daejojeon of Changdeokgung Palace was burned down by a fire in 1917, the Japanese government dissembled the building and recycled its construction materials to restore Daejojeon. The current building was reconstructed in 1994 according to its original design and specifications. The building, like Gangnyeongjeon, does not have a top roof ridge called "yongmaru."
Amisan (Hangul: 아미산; Hanja: 峨嵋山), a famous garden created from an artificial mound, is located behind Gyotaejeon. The four hexagonal chimneys, constructed around 1869 in orange brick and decorative roof tiles, decorate Amisan without showing their utilitarian function and are notable examples of formative art created during the Joseon Dynasty. The chimneys were registered as Korea's Treasure No. 811 on January 8th, 1985.

Hyangwonjeong
Hyangwonjeong (Hangul: 향원정; Hanja: 香遠亭), or Hyangwonjeong Pavilion, is a small, two-story hexagonal pavilion built around 1873 by the order of King Gojong when Geoncheonggung residence was built to the north of the Hyangwonjeong site within Gyeongbokgung.

The pavilion was constructed on an artificial island of a lake named Hyangwonji (Hangul: 향원지; Hanja: 香遠池), and a bridge named Chwihyanggyo (Hangul: 취향교; Hanja: 醉香橋) connects it to the palace grounds. The name Hyangwonjeong loosely translates as "Pavilion of Far-Reaching Fragrance," while "Chwihyanggyo" translates as "Bridge Intoxicated with Fragrance."

The building and the decorative walls were registered as Korea's Treasure No. 809 on January 8th, 1985.

Jibokjae
Jibokjae (Hangul: 집옥재; Hanja: 集玉齋), located next to Geoncheonggung Residence, is a two-story private library used by King Gojong. In 1876, a major fire occurred in Gyeongbokgung Palace, and King Gojong, for a brief period, moved and resided in Changdeokgung Palace instead. He eventually moved back to Gyeongbokgung in 1888, and he had the already-existing Jibokjae building dissembled and moved from Changdeokgung to the present location in 1891. Its name, "Jibokjae," translates loosely in English as "Hall of Collecting Jade."

The building uniquely shows heavy influence of Chinese architecture instead of traditional Korean palace architecture. Its side walls were entirely constructed of brick, a method commonly employed by the contemporary Chinese, and its roof design, interior screens, and columns also show Chinese influence. Its architecture possibly was meant to give it an exotic appearance. 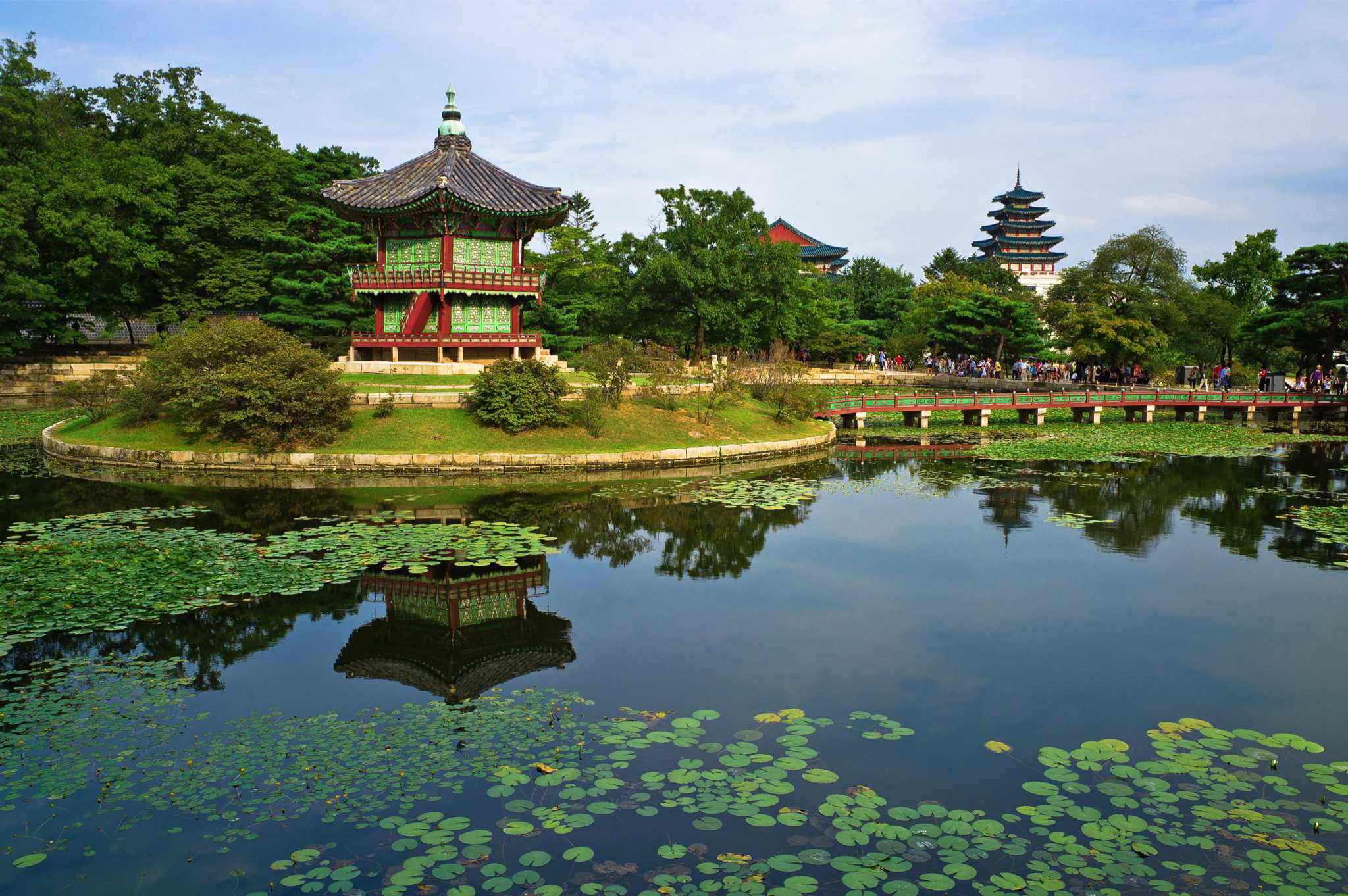