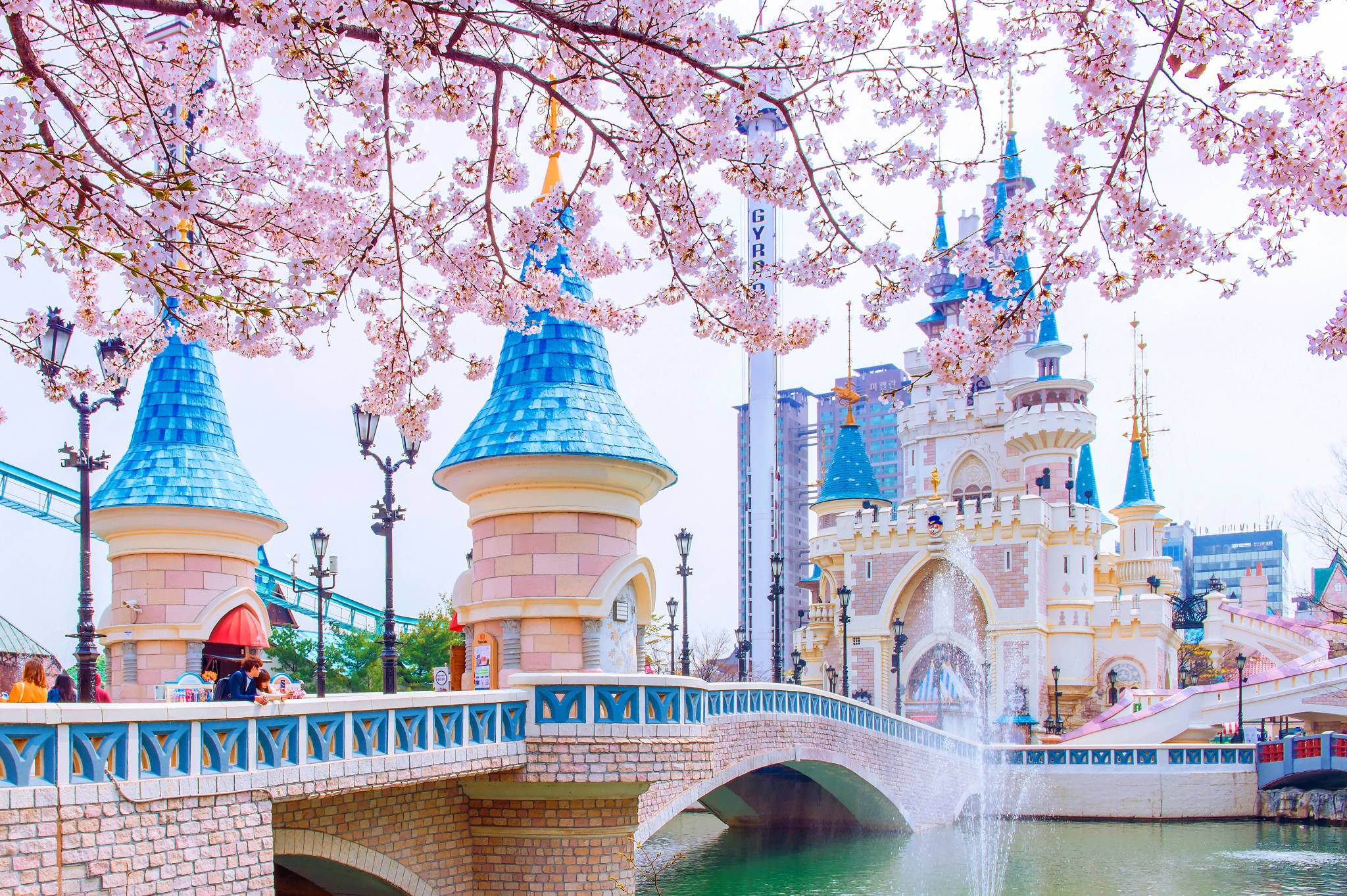 Attractions
The "Adventure" part of the amusement park is divided into four main floors.

Adventure 1F: Underland
The Adventures of Sindbad
A boat ride that allows passengers to travel along with Sindbad through an underground waterway.

The Conquistador
An Intamin-made Viking ship ride. It swings back and forth, almost reaching the ceiling of Lotte World at its maximum height. The seats at the ends of the ship rise 5 more meters and 24 degrees higher than the seats towards the middle.

Flume Ride
A log ride consisting of a 4-seat long boat that travels through a Jurassic jungle. Former name was "the Marrakesh Express".

Camelot Carrousel
The merry-go-round located near the middle of Lotte World consists of 64 white horses. This is also the merry-go-round featured in South Korean drama series, Stairway to Heaven.

Giant Loop
A Larson's fireball type roller coaster ride made only of one big loop. Passengers are constantly taken for 360 degree spins in a 14m-wide circular rail. The vehicle even stops while upside down.

Drunken Basket
An Intamin drunken barrels model teacup ride that spins the individual vehicles left and right while the whole ride itself rises up and down.

3D Desperados
A wide IMAX screen theater, where the seats are in the form of a horse. The seats move in all directions in accordance with the screen image. Passengers over 120 kg or under 120 cm must sit on a coach seat.

Lotty's Kidstoria
A playground for children under age 8. This play area's theme is a fairy-tale world. Children can go barefoot to explore Cinderella's Castle, Alice in Wonderland, and other fairy-tale stories.

Treeble's Hopper
A children's ride. The children are taken up towards a tree house as they jump up and down over 6 meters. Only children between 90 cm and 120 cm are permitted.

Kids Bumper Cars
Bumper cars for children which not permitted on the Crazy Bumper Cars. Anyone over 140 cm is not permitted, unless they are accompanying a child. Children under 5 years must have an adult with them.

Swing Pang Pang
A mini version of the Teacup ride; the children get on a twirling basket. Children under 6 years have to be accompanied by an adult.

Boong Boong Car
A kid ride where the children aboard a Boong Boong Car (붕붕 in Korean is the sound a car makes) and go to save Hansel and Gretel from the witch's house. Children under 105 cm are required to be accompanied by an adult.

Eureka
Magic boats that take riders up and down while spinning around.

Jumping Fish
Explore aquatic adventures. The only way to escape from the evil shark is to jump over it.

Do you speak Beluga?
Interactive live show with Beluga.

Bumper Car
For adults, must be at least 140 cm to ride.

Adventure 3F
Jungle Adventure
A water ride that takes passengers through the jungle. They get on a jungle boat and enter a dark cave and are taken through the rapids.

World Monorail
The monorail takes visitors through Lotte World—both inside and outside. It gives a scenic view as it goes by Adventure, then goes outside to Magic Island that sits over the Seok-Chon Lake.

Folk Museum
The folk museum allows visitors to learn all about Korea's people and history.

Adventure 4F
Pharaoh's Fury
A multi-motion ride where passengers board a Jeep and travel through ancient Egypt. The passengers feel as if they were right at the steering wheel as they go on a 1 km-long ride.

Aeronauts Balloon Ride
This ride in a balloon spans the majority of the indoor park. It allows visitors view Lotte World from high above.

Dynamic Theatre
This theatre shows 15-minute-long movies, while the chair vibrates along with the movie.

Animal Theatre
This production, targeted towards children, tells the story of Piggy who is in love with a Princess. The King has already chosen a fiancé for the Princess, Knight Rolo. However, Piggy eventually wins the love of the princess through the help of his animal friends.

Magic Island
This list is incomplete; you can help by expanding it.
Atlantis Adventure is a steel rollercoaster and is themed to the lost city, Atlantis.

Gyro Drop is a new attraction coupled with VR goggles to give a simulation of a futuristic landscape during the elevation sequence. After completing a short rotation at the top, the seats will be dropped, halting to a stop at the base. One can opt out of the VR goggles if needed.

Gyro Swing is basically a giant swing similar to the indoor ride, but with a rotating end where participants are seated.

Comet Express is an indoor rollercoaster with an outer space theme. Each car seats two people and rotates independently from the train.

Bungee Drop is the main bungee ride in the area.

Swing Tree is the chair swing ride in this area.

World Monorail is the monorail in this area. 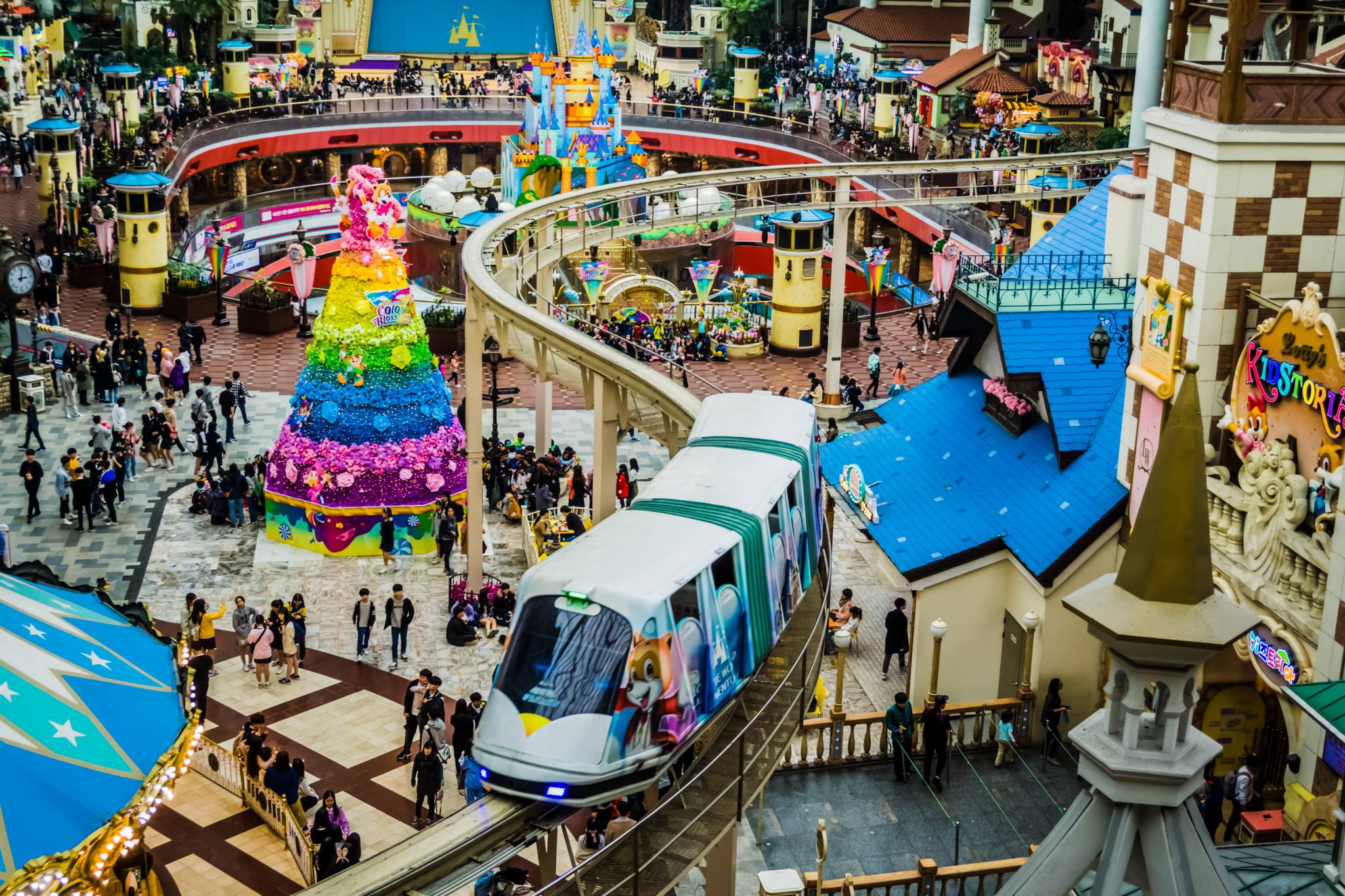