The N Seoul Tower, officially the YTN Seoul Tower and commonly known as the Namsan Tower or Seoul Tower, is a communication and observation tower located on Namsan Mountain in central Seoul, South Korea. At 236m, it marks the second highest point in Seoul.

Attractions
Many visitors ride the Namsan cable car up the Mt. Namsan to walk to the tower. The tower is renowned as a national landmark, and for its cityscape. The 236.7 m (777 ft) tower sits on the Namsan mountain (243m or 797 ft). It attracts thousands of tourists and locals every year, especially during nighttime when the tower lights up. Photographers enjoy the panoramic view the tower offers. Each year, approximately 8.4 million visit the N Seoul Tower, which is surrounded by many other attractions South Korea offers, including Namsan Park and Namsangol Hanok Village. Visitors may go up the tower for a fee that differs for the following groups: children, elderly and teenagers, and adults. Rates differ for each package and group size. The N Seoul Tower is divided into three main parts, including the N Lobby, N Plaza, and the N Tower. The N Plaza consists of two floors, while the N Tower includes four floors.

The N Lobby holds the N Gift, N Sweetbar, BH Style, the Alive Museum, Memshot, Nursing Room, Information booth, a cafe, and entrance to observatory. N Plaza has two floors. The first floor includes the ticket booth, N Terrace, N Gift and a burger shop. The second floor houses the Place Dining, an Italian restaurant, and the Roof Terrace where the "Locks of Love" can be found. The N Tower has four floors: 1F, 2F, 3F, and 5F (most buildings in Korea avoid having fourth floors). There are four observation decks (the 4th observation deck, which is the revolving restaurant, rotates at a rate of one revolution every 48 minutes), as well as gift shops and two restaurants. Most of the city of Seoul can be seen from the top. Close to N Seoul Tower is a second lattice transmission tower. The tower offers a digital observatory with a 360° panoramic view that showcases Korea's history through 32 LCD screens. This is located on the third floor of the N Tower.

In a poll of nearly 2,000 foreign visitors, conducted by the Seoul Metropolitan Government in November 2011, 16 percent stated that hanging named padlocks on the Tower fence as a symbol of love was their favorite activity in Seoul. This attraction is situated on the 2nd floor of the N Plaza, at the Roof Terrace. The "Locks of Love" is a popular location for people to hang locks that symbolize eternal love, and has been depicted in many Korean television shows, dramas, and movies for this reason.

The N Tower also holds many other attractions, including the digital observatory and the Wishing Pond. The Wishing Pond can be found on the second floor of the tower, where people throw coins into the pond wishing for eternal love. The coins are collected and donated to help develop schools in China and Southeast Asia, especially in underdeveloped areas. On the third floor, the newly designed observatory, renovated in 2011, can be found. The observatory not only offers the 360° view of the city, but also exhibits 600 years of Korean history through 36 LCD screens. The fifth floor houses a French restaurant known as N Grill.

The Tower is illuminated in blue from sunset to 23:00 (22:00 in winter) on days where the air quality in Seoul is 45 or less. The N Seoul Tower puts on many different shows, including the "Reeds of Light" and "Shower of Light." 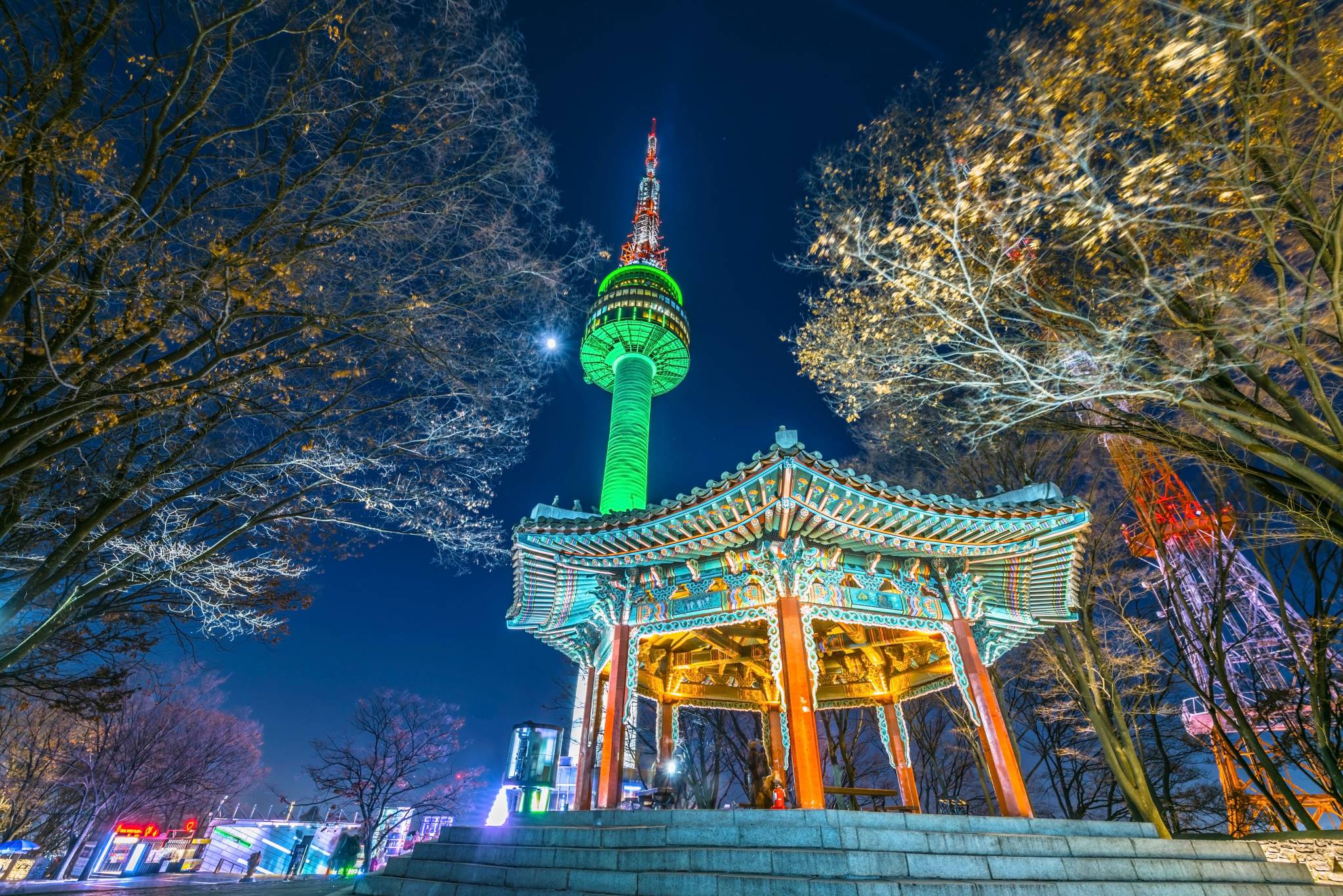