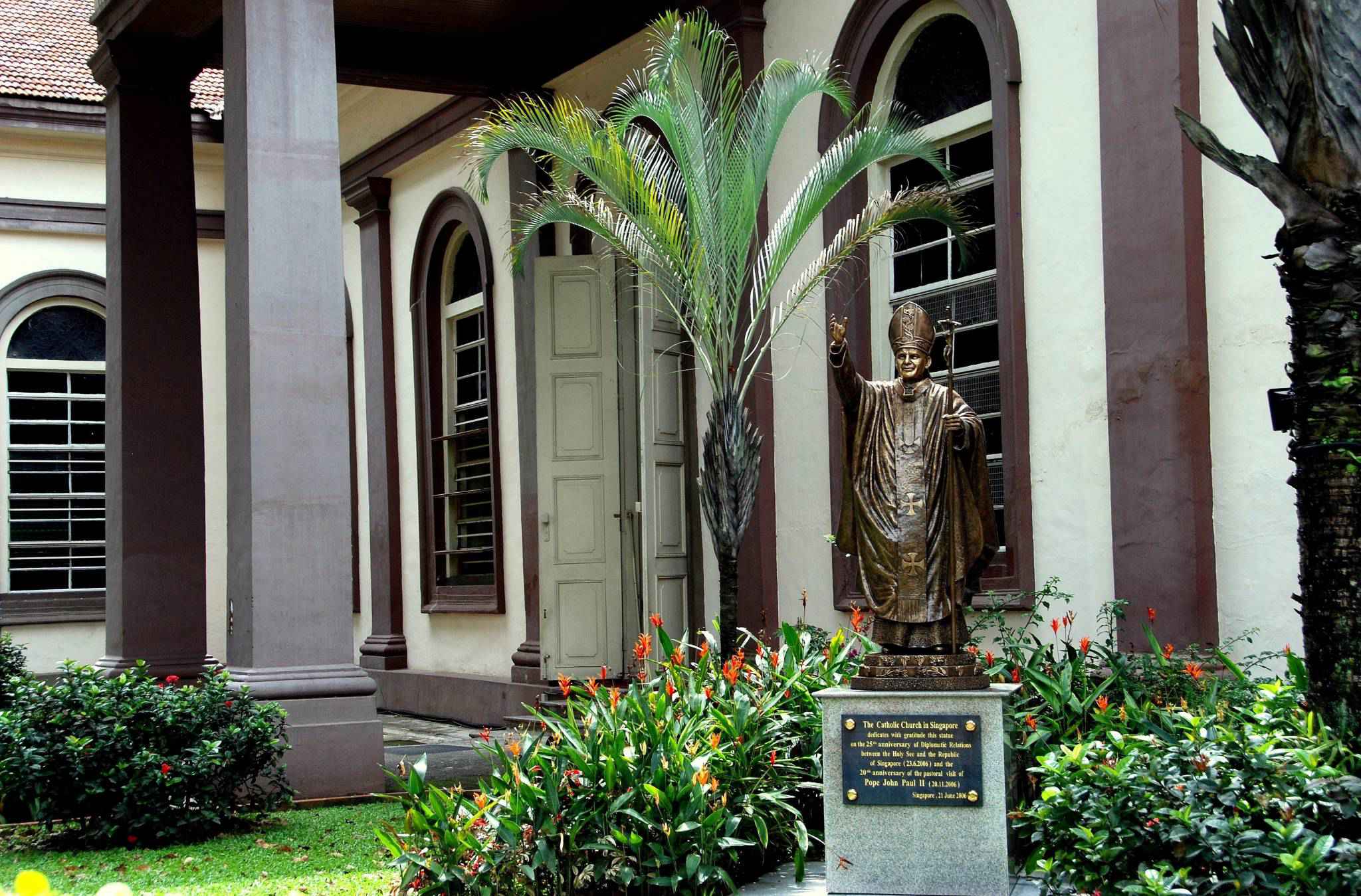 The Cathedral of the Good Shepherd is the oldest Roman Catholic church in Singapore. It is located in the Museum Planning Area within the Civic District and affords a welcome respite from the city.

Bounded by the parallel Queen and Victoria Streets, and Bras Basah Road, the Cathedral sits within well-shaded grounds. Much of its architecture is reminiscent of two famous London churches namely St Paul's, Covent Garden and St Martin-in-the-Fields.

The Cathedral of the Good Shepherd is the cathedral church of the Roman Catholic Archdiocese of Singapore and the seat of its archbishop. It is the final resting place of Bishop Edouard Gasnier, the first bishop of the revived Diocese of Malacca and aptly houses the relics of Saint Laurent-Marie-Joseph Imbert, to whom the Cathedral owes its name.

Architecture
The Cathedral of the Good Shepherd is built in a restrained Renaissance style. Its porticos are in the Palladian manner, which was established here by George Drumgoole Coleman. Its plan is in the form of a Latin cross and like all traditional churches, it is orientated east. Its high timber ceiling and its sensitive and harmonious use of round arches lend the building much grace and charm.

Steeple
The steeple, surmounted by a cross, consists of two sections. The first section is a square with each corner of the square marked by three engaged columns in the Ionic order. On each façade is an arched window. The four façades are topped with pediments ornamented with a circle. The cathedral's three bells are located inside this section and are decorated with religious motifs. Cast by the Crouzet-Hildebrand Foundry in Paris, the bells were originally hung for swing chiming, but electric tolling hammers have since replaced the long ropes for stationary chiming. During the most recent restoration, following the stabilization and reinforcing of the tower's structure, the bells were re-hung for swing chiming with an electric motor. On the second section of the steeple is an octagon with each corner of the octagon marked by an engaged column in the Tuscan order. On each façade is a narrow rectangular window. The eight façades are topped with pediments.

Entrances
There are six entrances into the cathedral with the one fronting Victoria Street closed to public access. The entrances are porticoed and have heavily moulded pediments. All pediments are ornamented with a moulded circle at the centre and, except for the ones at the ends of the transept and the one fronting Victoria Street, all are surmounted with a cross. The main entrance at the west end of the cathedral serves as the porte-cochère. The two side entrances at the nave are in the form of diminutive porticos and are smaller and less imposing then the entrances at the ends of the transept.

Upon entering the cathedral through the centre door at the main entrance, one will see the statues of Saint Anthony of Padua and Saint Francis Xavier, the four cast iron Composite columns supporting the gallery, and the two cast iron spiral staircases leading to the gallery. Nearby to the left sits a statue of the Pietà and a statue of Saint Joseph stands at the other end.

The eight large windows at the nave together with the other six at the transept and two at the sacristy are arched. There were originally eight large windows at the transept until the walling up of the two fronting Victoria Street. The original timber louvred casements of the windows were replaced by glass shutters with green glass in 1937. The stained glass windows in the lunettes of the nave and transept windows were presented to the cathedral by Bishop Charles Arsène Bourdon.

The timber ceiling is in a concave form and is made up of three rows of six rectangular panels. All eighteen panels are rather simply ornamented, with a simple rectangular border and a ceiling rose at their centres. The ceiling roses in the centre row are larger and more elaborate than those in the side rows. From the centre of each circle hangs a lamp. The ceiling edge ends in deeply mouled plaster cornice that runs along the length of the cathedral. As the height of the east end has been raised at different times, the dimensions of the entablature no longer relate to the columns properly, as their bases have been raised. The Cathedral was once lit with victorian crystal chandeliers, but these have since been replaced with the simpler lamps one sees today.

There are two confessionals to the left and right side of the nave and they are topped with pediments ornamented with a circle and cross at the centre. The set of fourteen oil paintings on the walls of the nave depict the Way of the Cross. At the crossing is the final resting place of Bishop Edouard Gasnier, the first bishop of the revived Diocese of Malacca.

Sanctuary
On the wall of the sanctuary is a crucifix, It is framed by a pediment and four pilasters – two pilasters on a pedestal on either side of it. This reredos is not original, and was installed some time in the 1960s, and is typical of the period, using standard glass mosaic tiles to create a 'starburst' background to the crucifix, as a replacement for the original high altar arrangement that was removed following the Second Vatican Council. At one point, the cathedra was moved to this spot where the high altar once stood, with the altar being moved forward as a free-standing 'communion table' style altar to allow versus populum celebration of the Mass. Following the most recent restoration, the traditional placement of the cathedra, to one side of the altar, has been reinstated. However, the decision was made to retain the 1960s reredos instead of reinstating the original high altar. However, the tabernacle was returned to its rightful place at the centre of the church, and a new retable was built for it. On either side of the main altar are doors that lead to the sacristy. A new altar table was also installed, of white marble and a more sympathetic design than the previous one, with a roundel containing a depiction of the Agnus Dei at its centre. There were once niches over the doors (which were also round-headed to match the windows) on either side and in the centre that held statues, but they were filled in and plastered over at the time the reredos was replaced. Today the doors are of a more conventional rectangular shape, and where the niches once were is now blank wall. The four crosses engraved on marble slabs in the sanctuary together with the other eight in the nave make up the twelve consecration crosses put in place on the interior walls around the cathedral for its consecration in 1897. They may never be removed and are proof, in the absence of documents, that a church has been consecrated.

North Transept
In the north transept stands a statue of Our Mother of Good Counsel in a niche topped by a pediment and flanked by two pilasters – each pilaster on a pedestal on either side of it. The north transept is where the Baptistery is located. The statue of Our Mother of Good Counsel and the stained-glass window over the door hints to its previous designation as the Chapel of the Blessed Virgin Mary. On the walls are memorial plaques to early personalities of the church, notably, John Connolly and Bishop Michel-Esther Le Turdu. The relics of Saint Laurent-Marie-Joseph Imbert can be found enshrined in the wall at the right side of the door.

South Transept
In the south transept stands the Tabernacle in a niche topped by a pediment and flanked by two pilasters – each pilaster on a pedestal on either side of it. This is the Blessed Sacrament Chapel. It takes the place of what was originally the Chapel of Saint Joseph. On the wall to the left of the Tabernacle is a memorial plaque to Father Jean-Marie Beurel.

Grounds
Outside on the grounds of the cathedral near the main entrance is a bronze life-size statue of Pope John Paul II, the Glorious Cross of 7.38 meters and a statue of the Virgin Mary. A statue of the Good Shepherd stands opposite the entrance at the south transept. 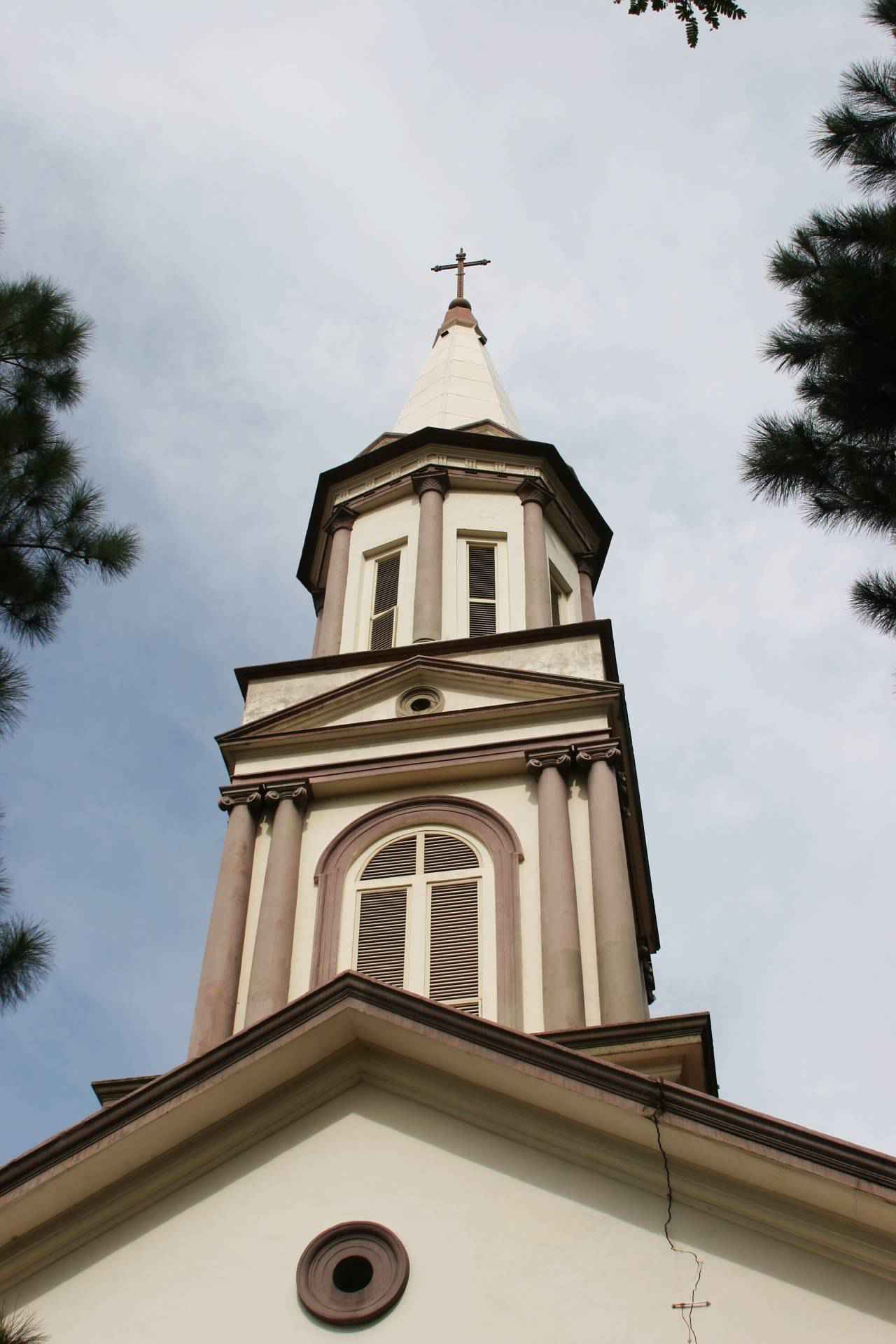