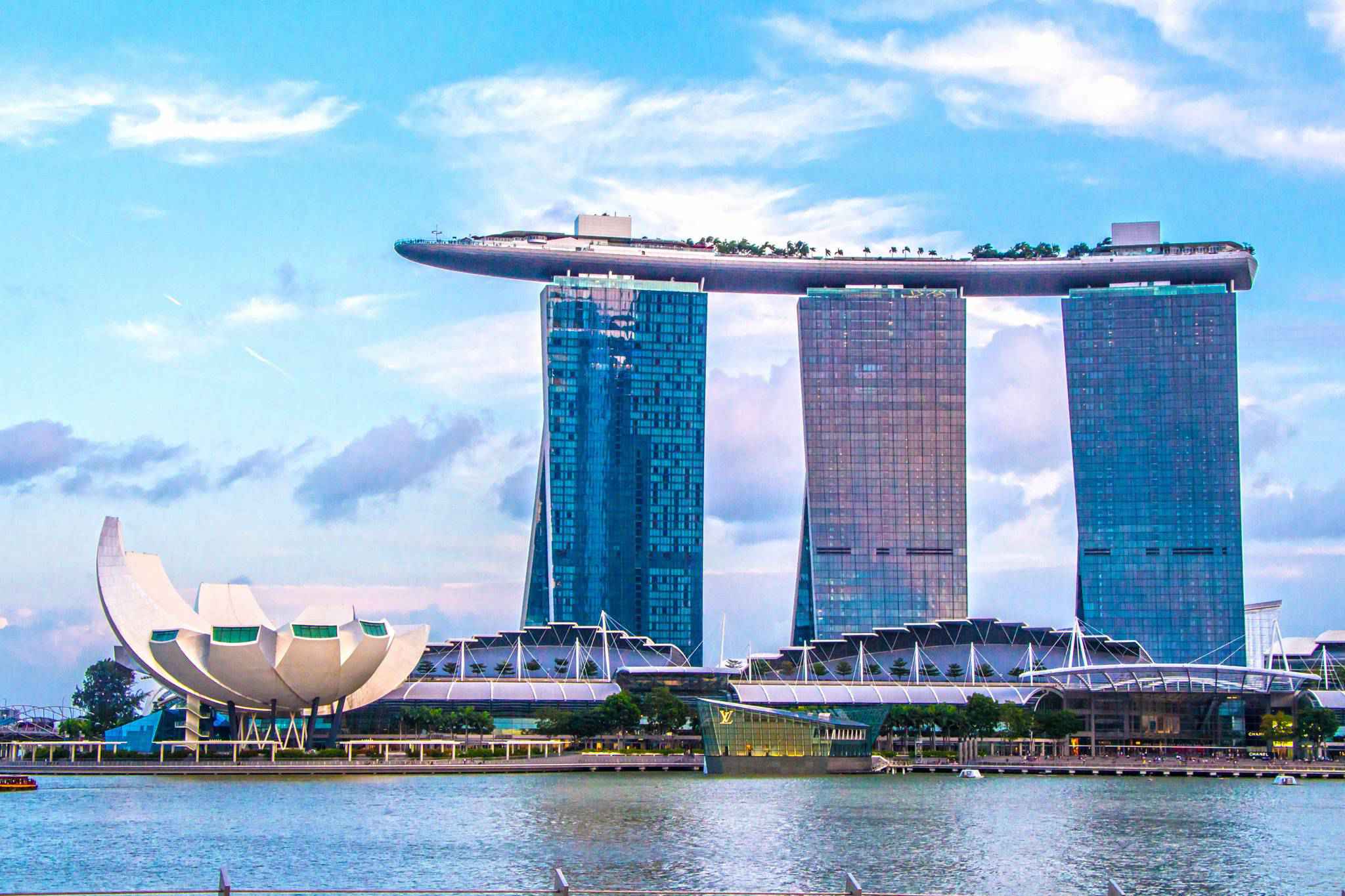 Marina Bay Sands is an integrated resort fronting Marina Bay in Singapore. At its opening in 2010, it was billed as the world's most expensive standalone casino property at S$8 billion, including the land cost.

The resort includes a 2,561-room hotel, a 120,000-square-metre convention-exhibition centre, the 74,000 m2 (800,000 sq ft) The Shoppes at Marina Bay Sands mall, a museum, two large theatres, "celebrity chef" restaurants, two floating Crystal Pavilions, a skating rink, and the world's largest atrium casino with 500 tables and 1,600 slot machines. The complex is topped by a 340-metre-long (1,120 ft) SkyPark with a capacity of 3,900 people and a 150 m (490 ft) infinity swimming pool, set on top of the world's largest public cantilevered platform, which overhangs the north tower by 67 m (220 ft). The 20-hectare resort was designed by Moshe Safdie architects. T

Design
The resort is designed by Moshe Safdie, who says it was initially inspired by card decks. In addition to the casino, other key components of the plan are three hotel towers with 2,500 rooms and suites, a 19,000 m2 (200,000 sq ft) ArtScience Museum and a convention centre with 110,000 m2 (1,200,000 sq ft) of space, capable of accommodating up to 45,000 people. The resort's architecture and major design changes along the way were also approved by its feng shui consultants, the late Chong Swan Lek and Louisa Ong-Lee.

Attractions
Marina Bay Sands has three 55-story hotel towers which were topped out in July 2009. The three towers are connected by a 1 hectare roof terrace, Sands SkyPark. The observation deck provides panoramic views across the bay.

In front of the three towers include a Theatre Block, a Convention and Exhibition Facilities Block, as well as the Casino Block, which have up to 1000 gaming tables and 1400 slot machines. The ArtScience Museum is constructed next to the three blocks and has the shape of a lotus. Its roof is retractable, providing a waterfall through the roof of collected rainwater when closed in the day and laser shows when opened at night. In front of the Event Plaza is Wonder Full, a light and water show that is the largest in Southeast Asia and was produced by Laservision.

The SkyPark has the world's longest elevated swimming pool, with a 146-metre (478 ft) vanishing edge, 191 metres above ground. The pools are made up of 422,000 pounds of stainless steel and can hold 376,500 gallons (1424 cubic metres) of water. The SkyPark also has rooftop celebrity chef restaurants such as Sky on 57 (by Justin Quek), Spago (by Wolfgang Puck), nightclubs such as Ce La Vie, gardens, hundreds of trees and plants, and a public observatory deck on the cantilever with 360-degree views of the Singapore skyline.

There are four movement joints beneath the main pools, designed to help them withstand the natural motion of the towers, and each joint has a unique range of motion. The total range of motion is 500 millimetres (19.68 inches). In addition to wind, the hotel towers are also subject to settlement in the earth over time, so engineers built and installed custom jack legs to allow for future adjustment at more than 500 points beneath the pool system. This jacking system is important primarily to ensure the infinity edge of the pool continues to function properly.

A canal runs through the length of the Shoppes, in the same style as the Venetian in Las Vegas. Sampan rides on the canal are available for guests and shoppers at the shopping mall, similar to the gondola rides available in the Venetian. Also housed within the Shoppes are the six of the ten Celebrity Chef restaurants – Bread Street Kitchen (by Gordon Ramsay), Cut (by Wolfgang Puck), Waku Ghin (by Tetsuya Wakuda), Pizzeria and Osteria Mozza (by Mario Batali), Long Chim (by David Thompson), DB Bistro & Oyster Bar (by Daniel Boulud).

There are two Crystal Pavilions. Despite a brief legal dispute in June 2011, it was decided that one of the Pavilions will house two nightclubs – Avalon and Pangaea. In addition, the second Pavilion houses the world's largest Louis Vuitton boutique, in addition to being on a floating island, at 1,900 m2 (20,000 sq ft), which is connected to the portion of the boutique in the Shoppes via an underwater tunnel. Both Pavilions opened in 2011 just before the 2011 Formula One season came to the Marina Bay Street Circuit.
The Sands Theatre and Grand Theatre seat 1,680 people and 2,155 people respectively, with The Lion King showing, and international acts, such as Cirque Éloize and A. R. Rahman's Jai Ho, located in the latter during their world tours. The musical, Wicked, is set to run for a limited season which started 7 December 2011. Next to the theatres is a skating rink (synthetic ice) measuring 600 m2 (6,500 sq ft).

Dragonfire boxing is another regular event, which started on 5 May 2012 with the boxers Chris John with Daud Yordan.

Moshe Safdie designed an Art Path within the resort, incorporating installations by five artists including Zheng Chongbin, Antony Gormley, and Sol LeWitt. The pieces are meant to play on environmental influences including light, water and wind, integrating art with architecture.

Transportation
By Mass Rapid Transit (MRT):
Bayfront Station and Marina Bay on both the Circle Line and Downtown Line
Promenade on the Circle Line
By public bus:
Services 97/97e, 106, 133, 502/502A, 518/518A, NR1
By water taxi:
From Grand Copthorne Water Front, Raffles Landing Side, Boat Quay, River Side Point and Robertson Quay 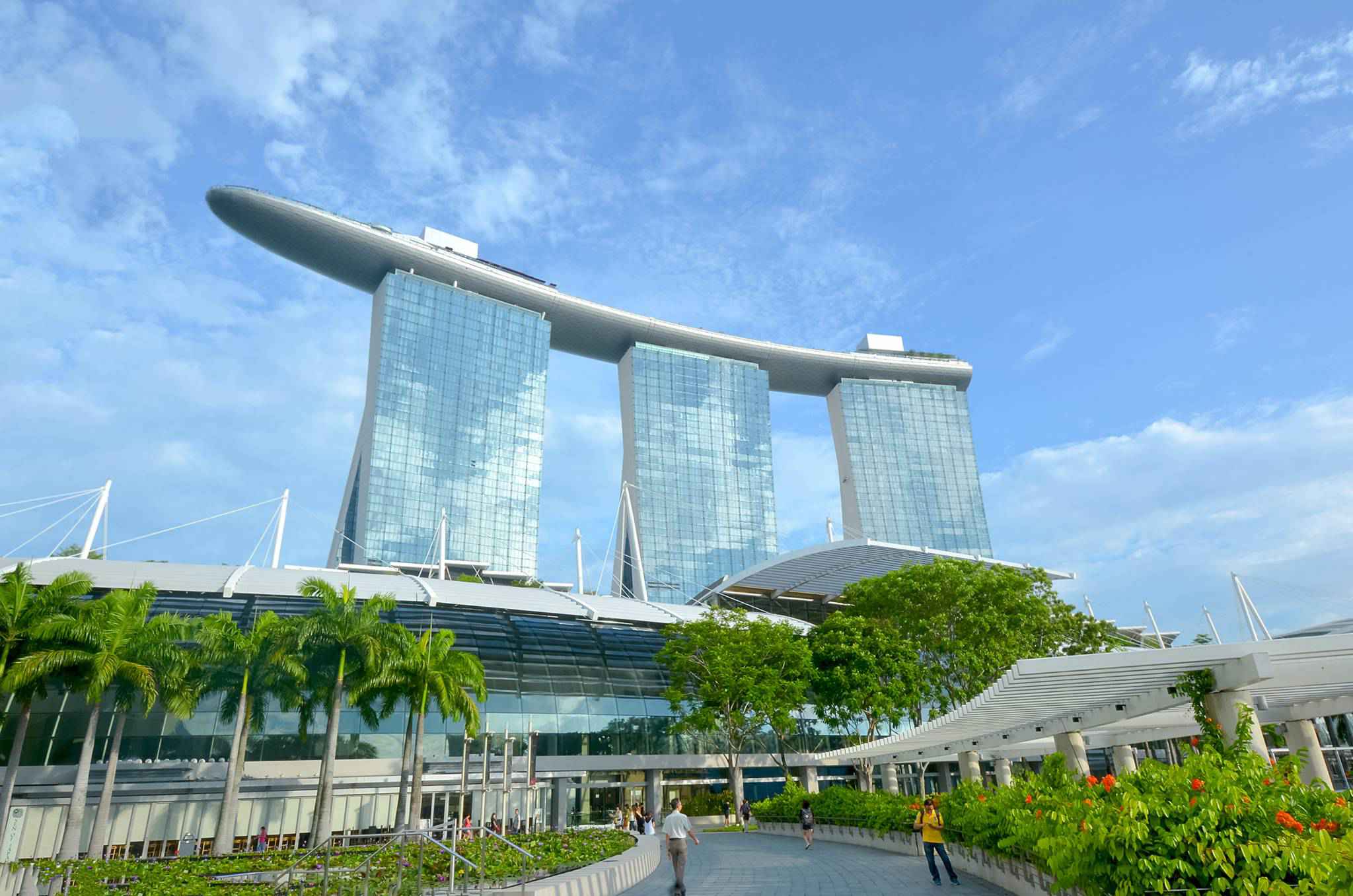