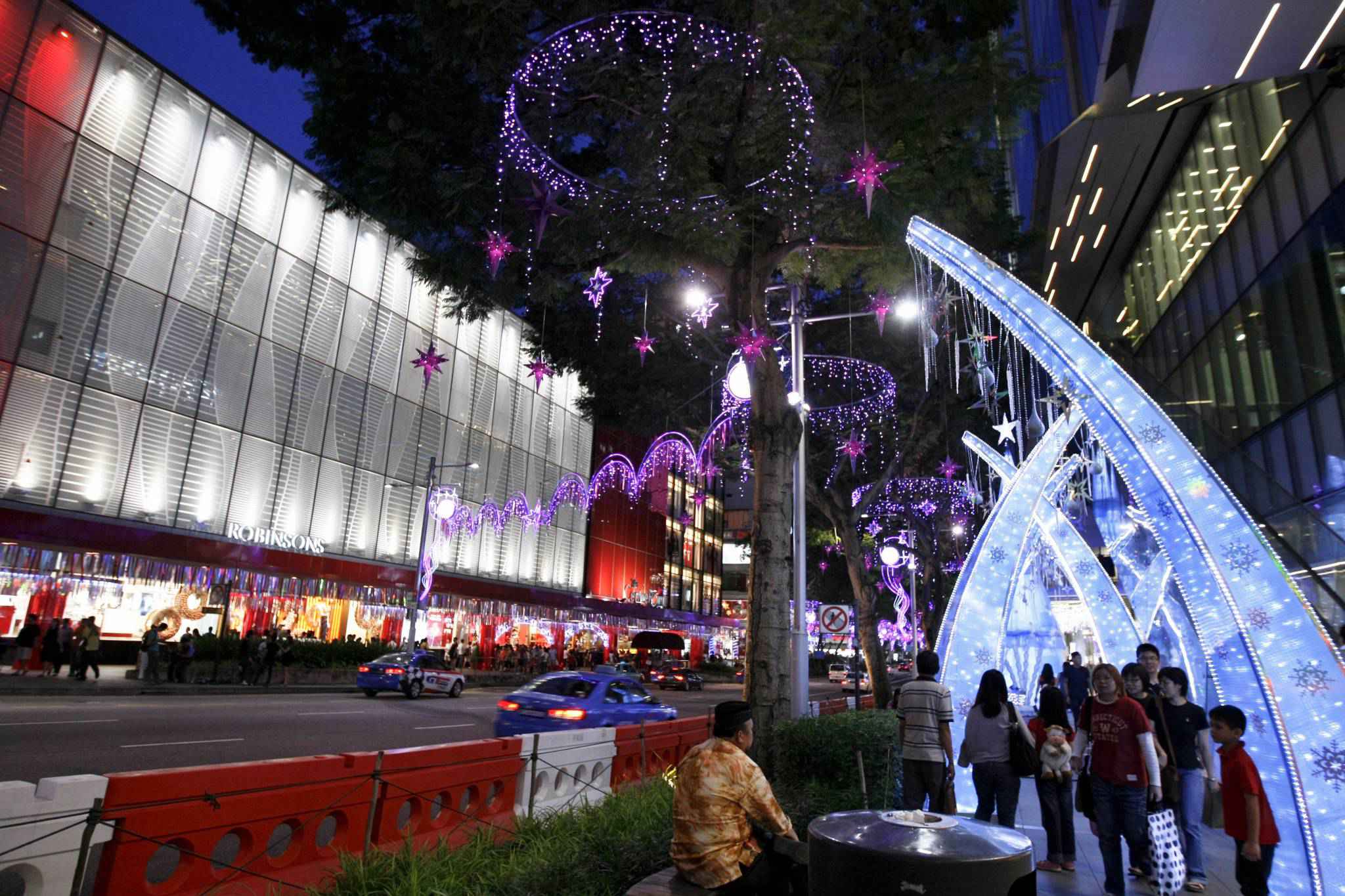 Orchard Road, a 2.2 kilometre-long boulevard, is the retail and entertainment hub of Singapore. Often known colloquially as Orchard, the area is a major tourist attraction. It is also known as Tang Leng Pa Sat Koi and Vaira Kimadam (Fakir's Place) by the Singaporean Chinese and Singaporean Tamils respectively.

The Orchard Planning Area a planning area as specified by the Urban Redevelopment Authority. It is part of the Central Area located within the Central Region. Orchard is bordered by Newton in the east and north, Tanglin in the west, River Valley in the south and Museum to the southeast.

Geography
After more than a century as a two-way thoroughfare, Orchard Road became a one-way street in 1974. The ever-lively street starts at the junction with Orange Grove Road which is the location of the Orchard Hotel. It then stretches southeast across the Scotts Road–Paterson Hill junction, Orchard MRT Station, Bideford Road, Somerset MRT Station, Central Expressway, Dhoby Ghaut MRT Station, and ends at the junction with Handy Road (just before Prinsep Street), where it becomes Bras Basah Road. It has an extensive underground infrastructure, including underground pedestrian walkways between the malls running underneath the street and other streets in the vicinity. The numbers begin at Handy Road and end at Orange Grove Road.

Orchard Road is flanked by pedestrian shopping centres. Orchard Road contains numerous upmarket restaurants, coffee chains, cafés, nightclubs and hotels. It is the site of the official residence and office of the President of Singapore, the Istana.

Tanglin Mall is located at the junction of Tanglin Road and Grange Road. Its customer base is made up of expatriates, yuppies and professionals. Anchor tenants include Tanglin Market Place, a gourmet supermarket and bakery, and Tasty Food Court where up to 15 varieties of local cuisine can be found.

313@somerset is directly linked to the Somerset MRT station and features a concentration of mid-range retail and dining outlets. Retail options are made of a mix of local and global fashion labels including Zara, Uniqlo, New Look, Esprit and a Forever 21 flagship store that spans four floors.

Visitors in Singapore (from 27 May to 24 July 2011) qualified for Great Singapore Sale tourist privileges and discounts at shopping complexes along Orchard Road. During this period, a number of shopping centres extend their opening hours till 11pm.

American fashion retailer Abercrombie & Fitch opened a flagship store on Orchard Road on 15 December 2011. The store was marked by controversy over an ad during its construction phase.

Ngee Ann City – The shopping centre opened in 1993 and is the largest in the Orchard Road shopping belt. It houses branded boutiques such as Louis Vuitton, Hermès, Burberry, Loewe and Chanel as well as Japanese department store, Takashimaya.

Plaza Singapura – Located next to the Istana, the shopping centre opened in 1974 with a now defunct Yaohan department store. It was revamped thrice, in 1998, 2003 and 2012 with the former being a total revamp, and the latter a new mix of tenants. It currently houses a Golden Village cineplex, Cold Storage and Uniqlo. A Carrefour branch used to be located here until Carrefour pulled out from Singapore.

Lucky Plaza – A shopping complex that somehow became the main focal point for domestic Filipino workers to meet their friends during their off days. The place is known to be very crowded on Sundays with many shops selling products from the Philippines.

Far East Plaza – Far East Plaza opened in 1982 with a Metro which has since closed down. Popular with students due to its cheap fashion items as well as inexpensive food, the plaza is also known for its cheap food outlets. The shopping complex has since undergone renovation.

Cathay Cineleisure Orchard - a cinema in Singapore, in addition there is a 7-Eleven and a food court there.

Orchard Point – Before being home to local department store OG, the complex used to have art galleries.

Orchard Towers – A shopping centre consisting of twin blocks with small shops and nightclubs as well as a reputation for promiscuous activity after-hours.
The Paragon – The Paragon is a high-end shopping centre selling branded items such as Gucci (whose flagship store operates here), as well as Miu Miu, Prada, Coach, and Burberry with a Metro department store and a Marks & Spencer store as well. The place has a Toys 'R' Us and a number of restaurants. It underwent expansion around 2002, taking over the land once occupied by another shopping centre, The Promenade. The Promenade was built on the former location of Fitzpatrick's supermarket.

Tang Plaza – Tang Plaza is where the homegrown department store, Tangs, is located.

The Centrepoint – The shopping centre opened in 1983 and has Robinsons and Marks and Spencer as its anchor tenants. It underwent renovation and built a new extension in 2007. Metro had taken over The Centrepoint since 2014.

The Heeren Shops – 'Heeren' means 'Gentleman' in Dutch, and as such, this shopping complex targets fashionable, young, working age shoppers. It is also popular amongst teenagers, and has a variety of niche shops. It is currently home to one of two T.G.I. Friday's on the island. The site was formerly a colonial building, and is currently largely under renovation. Robinsons secured a largest tenant at The Heeren to replace one, finally it had been changed to Metro in The Centrepoint.

Forum The Shopping Mall – Forum sells mainly branded children's clothes and accessories with a Toys "R" Us on the third floor. It also has a number of branded boutiques such as Emporio Armani and Dolce and Gabbana.

Shaw House and Centre – Shaw House is home to the Isetan department store, and on the fifth and sixth floors the one of the largest cinema halls in Singapore, Lido 8 Cineplex, resides. This mall is also home to a number of shops such as Fendi, Loewe and Celine.

Palais Renaissance – Palais Renaissance was completed in 1993 and mainly houses upmarket branded boutiques such brand like Donna Karen and Valentino.
Liat Towers – International names such as Audemars Piguet, Massimo Dutti, Hermès and Zara are housed in the building. The building once housed Planet Hollywood and Singapore's first McDonald's. At one point in time it also housed the Isetan department store.

Buses
Bus services provided by SBS Transit, SMRT Buses and Tower Transit Singapore provide access to Orchard Road. Bus stops are staggered to avoid causing congestion, with the scheme being implemented on 13 May 2004 (1st Phase, Mandarin Orchard Singapore) and 28 May 2004 (2nd Phase, Midpoint Orchard). A bus lane was introduced in 2005, operational from 7.30am to 8pm, Monday to Saturday. It was extended to 24 hours in 2016. The major bus stops along Orchard Road are situated at:
Delfi Orchard
Royal Thai Embassy, Singapore (opposite House of Hung Jewellers)
Tang Plaza
Lucky Plaza
opposite Mandarin Orchard Singapore
Midpoint Orchard
Orchard Plaza
Concorde Hotel Singapore
Dhoby Ghaut MRT Station
MacDonald House
YMCA
Westbound passengers can board their buses at Penang Road (Dhoby Ghaut Station), Somerset Road (Somerset Station), Orchard Turn (opp Ngee Ann City/Takashimaya), Orchard Turn (Orchard Station), Orchard Boulevard (opp Orchard Station) and Orchard Boulevard (Wheelock Place).
Taxi
Orchard Road has numerous taxi stands, which are mostly found at shopping centres and hotels. It is prohibited to hail taxis at locations other than these official stands.
Vehicular access
Those driving into Orchard Road may enter from the west via Napier Road. Vehicles from Dunearn Road that travel via Scotts Road can turn left into Orchard Road at the Marriott Hotel junction. Vehicles coming from the opposite direction on Paterson Road can enter Orchard Road by turning right. There are also a number of other roads leading into Orchard Road. Orchard Road is one-way heading south and leads into Bras Basah Road which is a one-way street heading south. 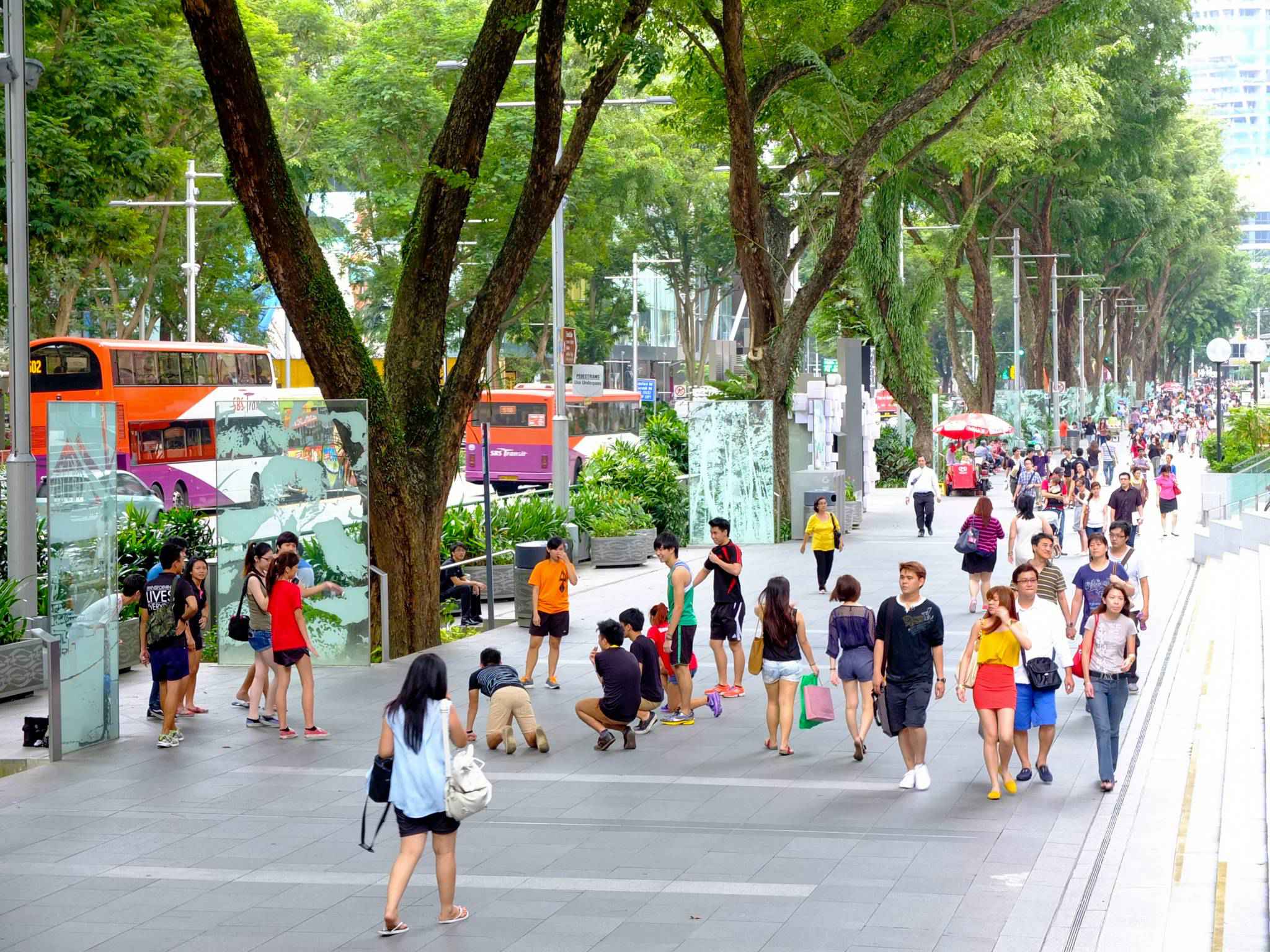