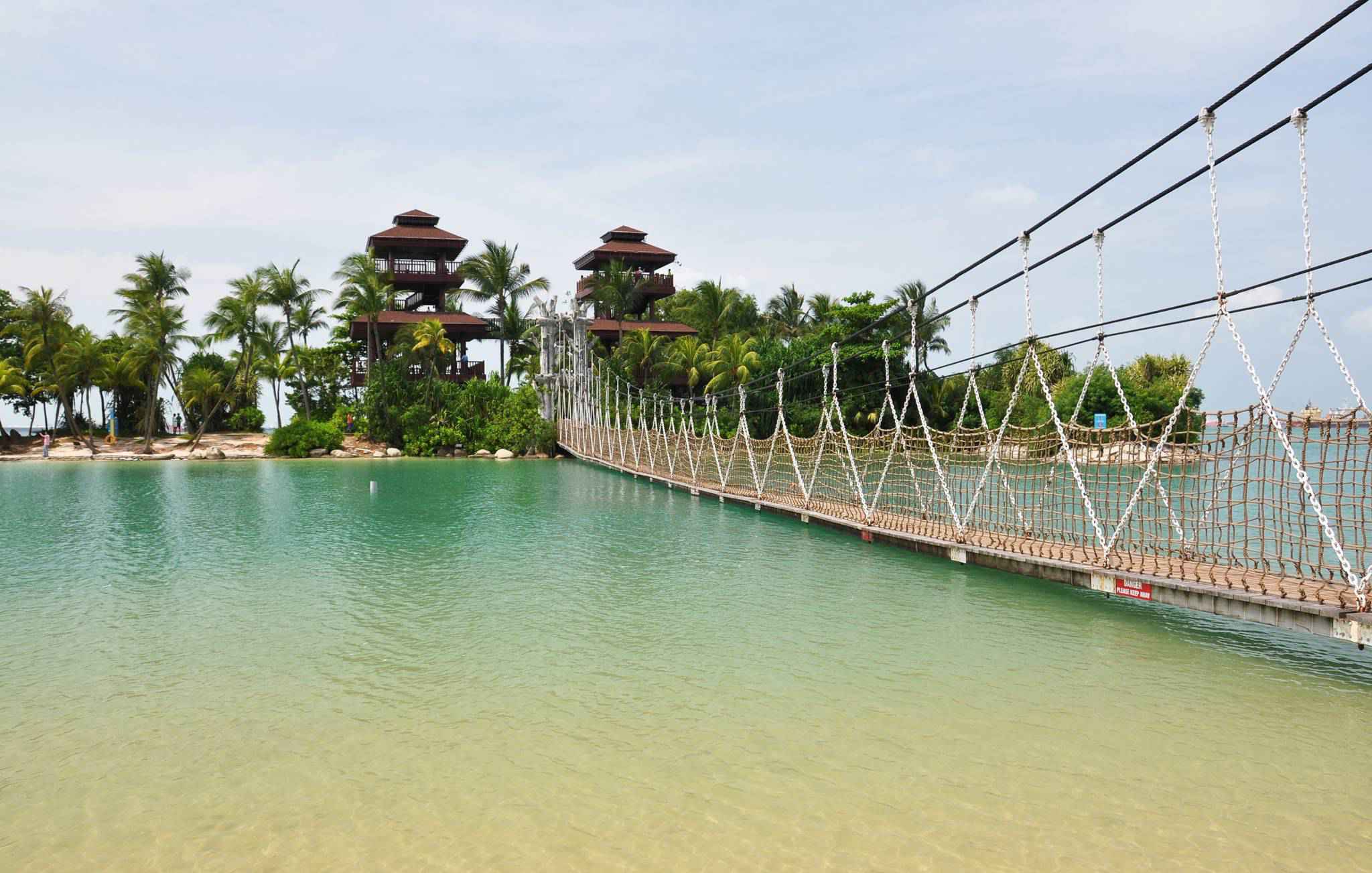 Transport
Sentosa can be reached from the Singapore mainland via a short causeway or Cable Car, which originates from Mount Faber and passes through HarbourFront en route to its final destination at Imbiah Lookout. In 2015, Sentosa opened an intra-island Cable Car to facilitate travelling within the island. Dubbed the sky network, the Cable Car has 3 stations, in Siloso, Imbiah and near the Merlion, and is not linked to the original Cable Car.

The island is also accessible by the Sentosa Express monorail, which replaced the old Sentosa Monorail that operated from 1982 to 2005. The Sentosa Express has three stations on Sentosa and one on mainland Singapore. The northern terminus of the line is located at the VivoCity shopping mall on the mainland and the southernmost terminus, Beach Station, is located on Sentosa Island. In Vivocity, the mainland MRT is in turn served by the HarbourFront of the North East Line and the Circle Line.
Within Sentosa there are three bus services, identified as Bus 1, Bus 2 and Bus 3, and a tram service called the Beach Tram. Since 1998, passenger cars have been allowed to enter the island.

Features
Tiger Sky Tower (previously known as the Carlsberg Sky Tower) is a free-standing observation tower. At a height of 110 m (360 ft) above ground and 131 m (430 ft) above sea level, it offers visitors a panoramic view of Sentosa, Singapore, and the Southern Islands. It has a lifting speed of 1.2 metres per second and weighs 200 metric tonnes. On a clear day, the view extends to parts of Malaysia, Johor Bahru (30 km / 18 miles), Indonesia, Pulau Bintan (45 km / 28 miles) and Pulau Bantan (43 km / 27 miles). At ground level, visitors enter a large disc-shaped air-conditioned cabin fitted with glass windows all around. The cabin then revolves slowly as it ascends the column of the tower. The cabin has a capacity of 72 visitors. The Sky Tower now sits at the very spot of what was formerly known as the Dragon Court. It had a dragon statue as the centerpiece with water spouting from its mouth. In one of its claws, it held a previous logo of Sentosa which was used in the early 1980s. Its tail ended at the Dragon Trail in the northern part of Imbiah Lookout. The statue was demolished a few months before the groundbreaking ceremony of the Sky Tower. The Sky Tower was officially opened on 7 February 2004, is situated in the Imbiah Lookout zone in the centre of Sentosa and can be reached by Cable Car, Sentosa Luge Chair Lift, the Sentosa Express or by internal bus.
Butterfly Park and Insect Kingdom is a landscape garden with over 15,000 live butterflies, representing more than fifty species. Housed in a cool outdoor conservatory, these butterflies range from the 25 millimetre (1 in) Eurema sari to the 150 mm (6 in) Papilio iswara. The Insect Kingdom houses some 3,000 species of rare insects from around the world, including a 160 mm Dynastes Hercules beetle.

Sentosa Merlion is a gigantic 37 metre-tall replica of the Merlion which was completed in 1995, housing two viewing galleries and a souvenir shop. The Merlion statue once played a role in the world-famous Magical Sentosa show, but had to drop the part after the show was discontinued in March 2007 to make way for the construction of Resorts World Sentosa. Both the now defunct Sentosa Monorail and the Sentosa Express pass closely by the statue. Unlike its predecessor by the Esplanade, Sentosa Merlion distinguishes itself as the only Merlion in Singapore where you can learn about the urban myth within its attraction trail.

The Wings of Time show, created and produced by events company ECA2, is a multimedia extravaganza performance which started its run on 17 June 2014, replacing "Songs of the Sea" which ended its run on 4 May 2014. A series of triangular projection screens 120 m (390 ft) long sits propped up on the water surface while the rest of the equipment (water jets, water screens, lasers and projectors) is hidden at the back. Wings of Time features pyrotechnics displays, water fountains, water screens, laser projectors, flame bursts, a live cast and an open-air viewing gallery which can comfortably accommodate 2,500 visitors. The show runs twice nightly every evening. Tickets are purchased at all Sentosa ticketing counters or online.

Fort Siloso is located in the west of the island, with the guns of this preserved fort still standing. Fort Siloso was built by the British in 1880s to guard the narrow western entrance to Keppel Harbour. It was later modernised. The fort guarded the western approaches to Singapore during World War II. By 1939 it was armed with two 6-inch (150 mm) Mark2 guns and two rapid firing 12-pounder guns. Fort Siloso is now the only surviving coastal gun battery from the twelve such batteries that made up Fortress Singapore at the start of the war. The ammunition bunkers, barracks, tunnels, and gun emplacements of the fort are now open to visitors as a military-themed attraction. Also on display is a collection of artillery guns dating from the 17th century to World War II. Life-sized replicas of British soldiers and other people are on display to depict life at the fort. Fort Siloso is home to the nation's largest collection of World War II memorabilia, including photographs, documents and film clips. The fort also served as the place of internment for the Singaporean political prisoner Chia Thye Poh in the period 1989-1993. This attraction was once served by the Fort Siloso Monorail Station of the discontinued Sentosa Monorail. After the monorail closed in 2005, the station was repurposed to add on to this attraction. An elevated walkway, called the Fort Siloso skywalk, was opened in 2015, giving visitors an aerial view of the fort and its surrounding foliage.

MegaZip Adventure Park, located at the top of Mount Imbiah, is Singapore's first adventure park with one of the longest and steepest zip wires in Asia (MegaZip), a 3-level, 40 feet-high aerial rope course (ClimbMax), a 50-foot high free fall simulator (ParaJump) and a challenging 16 metre-high rock climbing wall (NorthFace). At over 450 metres long and 72 metres above sea level, MegaZip is Asia's most extreme zip line. Guests descend at speeds of up to 50kmph from the jungle canopy of Imbiah Hill to the sands of Fox Finishing Point at Siloso Beach. This attraction was visited on the sixteenth season of the American reality show, The Amazing Race.
Madame Tussauds Singapore is the newest wax attraction situated at Imbiah Lookout. It connects to Images of Singapore, an award-winning historical museum that exhibited the culture and history of Singapore. After the opening of Madame Tussauds, Images of Singapore was turned into a live show. Images of Singapore and Madame Tussauds Singapore has eight fully themed interactive zones, a new "Spirit of Singapore" boat ride, and the Madame Tussauds wax museum zone.
Wave House Sentosa is located at Siloso Beach. The 70,000-square-foot (6,500 m2) Wave House consists of the Double FlowRider and the 10-foot (3.0 m) FlowBarrel, Singapore's first artificial barreling wave.

The Skyline Luge & Skyride features a self-steering, gravity-driven three-wheel cart. Invented in New Zealand over 27 years ago, this non-motorised cart allows riders to speed down a hill choosing between the 688 metre-long Dragon trail or the 628 metre-long Jungle trail, both ending at Siloso Beach. At the foot of the hill, guests can board the Skyride, a chairlift which affords a bird's-eye view of Sentosa Island, the Singapore city skyline and the South China Sea.
iFly Singapore - Measuring 16.5 feet in diameter with a flying height of 56.5 feet, iFly Singapore is the world's largest themed vertical wind tunnel. Visitors will receive professional training and guidance from certified instructors and complimentary skydiving gear rental on top of the actual skydive experience.
Sentosa Nature Discovery aims to educate and allow guests to appreciate the various species of flora and fauna that are unique to Sentosa's environmental landscape. Housed in a former monorail station that has been creatively adapted, it features interactive and colourful exhibits as well as a 1.8 km-long nature walk on an elevated boardwalk that was once the monorail's tracks.

Kidzania Singapore opened in 2016 at Palawan Beach, adding to the Mexican franchise's global outposts. Kidzania is an interactive indoor theme park combining inspiration, fun and learning through realistic role-play for children aged 4 to 17.

MOSH! was also opened in the same premises as Kidzania. It is Singapore's first interactive digital family edutainment park, which showcases state-of-the-art multimedia technology from Japan.

Sentosa will also soon open Singapore's first bungee jump, in conjunction with New Zealand franchise AJ Hackett Bungy. There is also further planning for 2 new attractions, one of which will be nature-based, in the vicinity of Imbiah and Siloso Beach.

Beaches
Sentosa has a stretch of sheltered beach of more than 2 km (1.2 mi) on its southern coast, divided into three portions: Palawan Beach, Siloso Beach and Tanjong Beach. These beaches are artificial, reclaimed using sand bought from Indonesia and Malaysia. They are manned by a beach patrol lifeguard team who are easily identified by their red and yellow uniforms.

Palawan Beach lies in the centre of the southern coast of Sentosa. There is a suspension bridge that leads to a small islet off the coast which is said to be the southernmost point of continental Asia, or Asia's closest point to the Equator. There are several bars along the beach offering food and beverage options to visitors as well as Beach Station of the Sentosa Express.

Siloso Beach lies on the west portion of the southern coast and it is known as the place for beach volleyball and other outdoor activities such as canoeing, skimboarding, mountain biking and rollerblading. There are also dining and shopping outlets along the beach. The beach underwent a SGD$3 million facelift in December 2012. The Rasa Sentosa Resort is located at the western end of Siloso Beach.

Tanjong Beach is located on the relatively more secluded eastern part of the coast. The crescent-shaped beach is sometimes used for special events or parties. The beach bar 'KM8' used to be located here, but it closed down on 28 March 2009. The Tanjong Beach Club is now the main draw on Tanjong Beach.
Other facilities

The Singapore Civil Defence Force's (SCDF) newest fire station officially commenced operations on the island of Sentosa at 8am on Monday (6 June 2016).Sentosa Fire Station, which is located at 37 Artillery Avenue, has a fleet of five emergency vehicles: two fire engines, a fire bike, an ambulance and an aerial firefighting and rescue support vehicle. It is strategically placed to provide emergency services within the island and the immediate vicinity such as the HarbourFront and Telok Blangah areas. 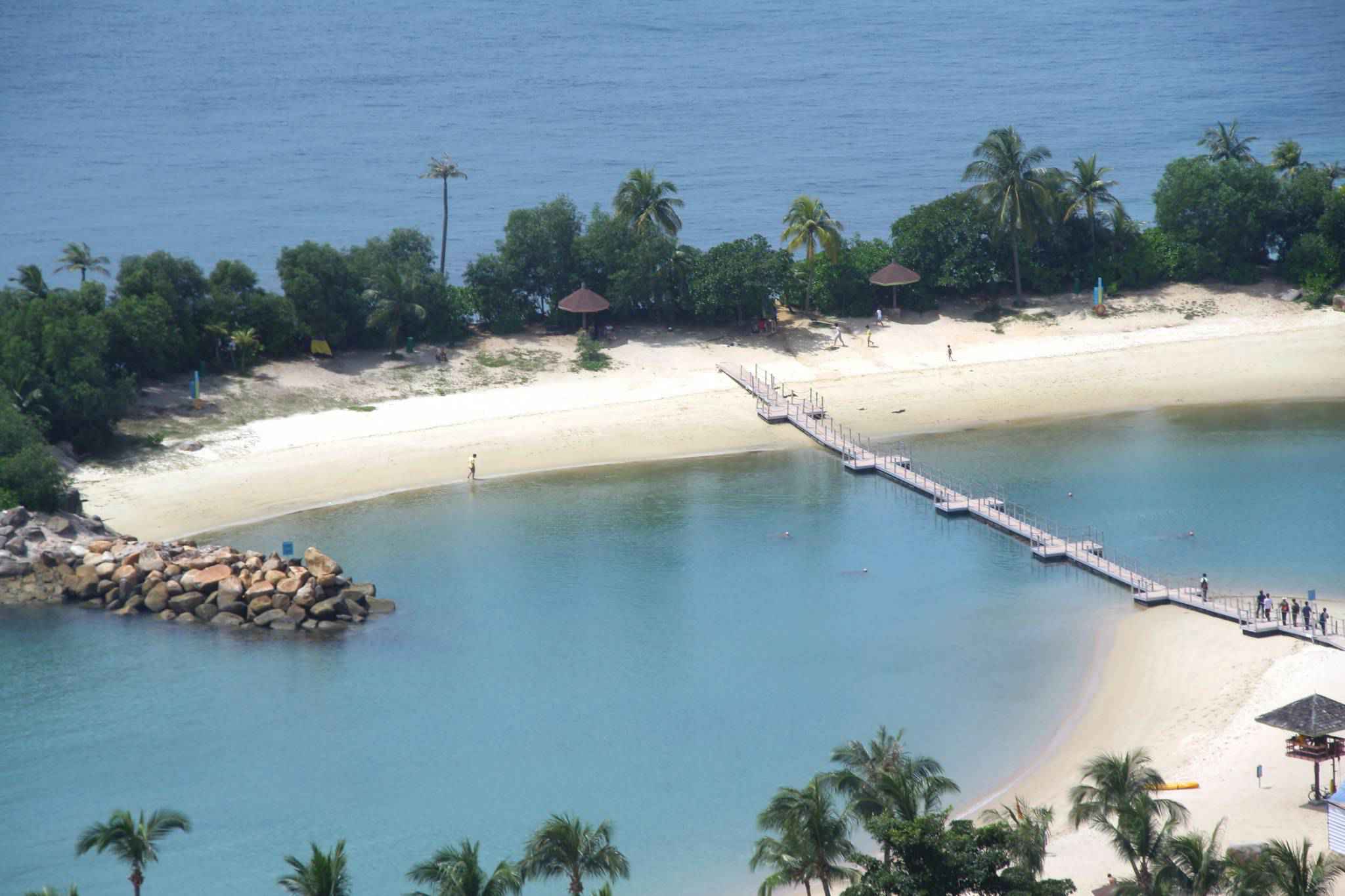