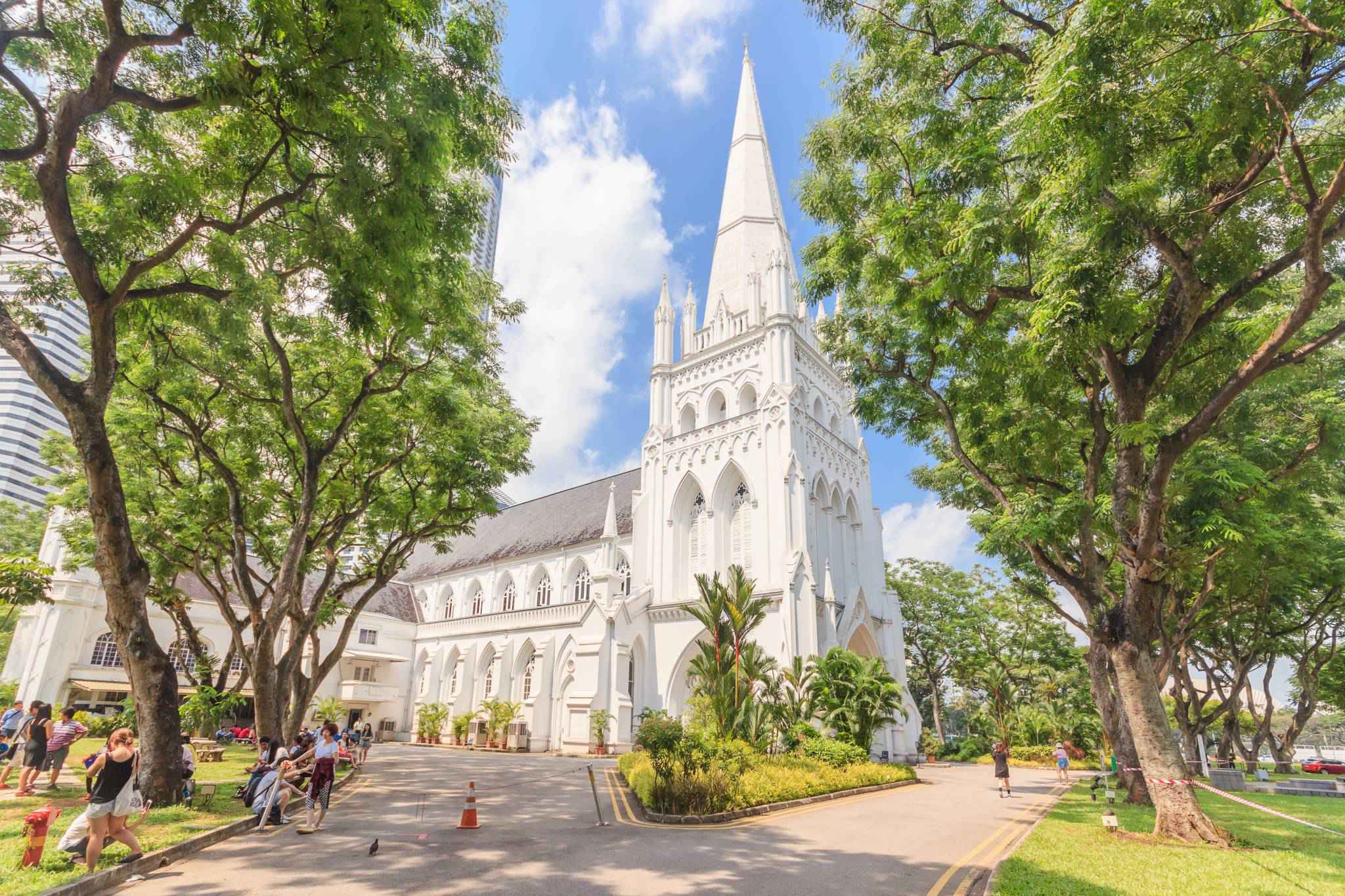 Saint Andrew's Cathedral is an Anglican cathedral in Singapore, the country's largest cathedral. It is located near City Hall, MRT Interchange in the Downtown Core, within the Central Area in Singapore's central business district. It is the Cathedral church of the Anglican Diocese of Singapore and the mother church of her 26 parishes and more than 55 congregations here. The logo of the Cathedral is the St Andrew's Cross. The Year 2006 marks the 150th Anniversary of the St Andrew's Church Mission since 1856.

Consecration as cathedral
In 1869, the church was transferred from the Diocese of Calcutta to the Diocese of Labuan and Sarawak. In 1870, Archdeacon John Alleyne Beckles consecrated it as the Cathedral Church of the United Diocese.

The Revere Bell was replaced by a peal of bells in 1889. The Revere Bell is currently placed in the National Museum of Singapore. The Cathedral is owned by the Synod of the Diocese of Singapore, and the first Anglican bishop, The Right Reverend J. Ferguson-Davie, was appointed in 1909. In 1942, shortly before the fall of Singapore to the Japanese, the cathedral served as an emergency hospital. A Memorial Hall dedicated to those who died in the Second World War was added in 1952.
The north and south transepts of the cathedral was originally built as porches for carriages. Both transepts have been extended to provide halls, meeting rooms and offices – the North Transept in 1952, the South Transept 1983.

Saint Andrew's Cathedral was gazetted as a national monument on 28 June 1973.

An archaeological excavation was held on its grounds in 2004 by the National University of Singapore.

Architecture
The existing cathedral was designed in a Neo-Gothic architectural style, and was finished with Madras chunam. The architect is said to have drawn inspiration for aspects of the design from Netley Abbey, a ruined thirteenth century church in Hampshire, England. The piers of the nave of Saint Andrew's closely resemble the surviving piers at Netley.
Three stained glass windows are dedicated to three figures in Singapore's early colonial history: the window at the center is dedicated to Sir Stamford Raffles; the windows on either side to John Crawfurd, the first major Resident of Singapore, and Major General William Butterworth, the Governor of the Straits Settlements. These windows are located at the apse, however, the original stained glass windows were destroyed during the Second World War. MacPherson is remembered in the grey and red granite memorial monument surmounted by a Maltese cross in the grounds and by the stained glass window over the big west door. Jalan Klapa was renamed MacPherson Road in remembrance of his work. The gallery at the West end was not part of MacPherson's plan but added after the Cathedral opened. It has the only decorated elements in the church, with foliated pillars and pilasters, and crocketed arches.

Saint Andrew's Cathedral expresses its affiliation with the Anglican Communion in England through three symbolic objects. Set in a pillar by the lectern, the Canterbury Stone engraved with a bronze cross was presented by the Metropolitan Cathedral Church of Canterbury and is a sign of Saint Andrew's allegiance to the See of Canterbury. On the column that supports the pulpit is the Coventry Cross, made from two silver-plated iron nails from the ruins of the 14th century Coventry Cathedral. The Coronation Carpet in the Epiphany Chapel is a portion of the flaxen carpet that was used for the Coronation of Queen Elizabeth II in Westminster Abbey. 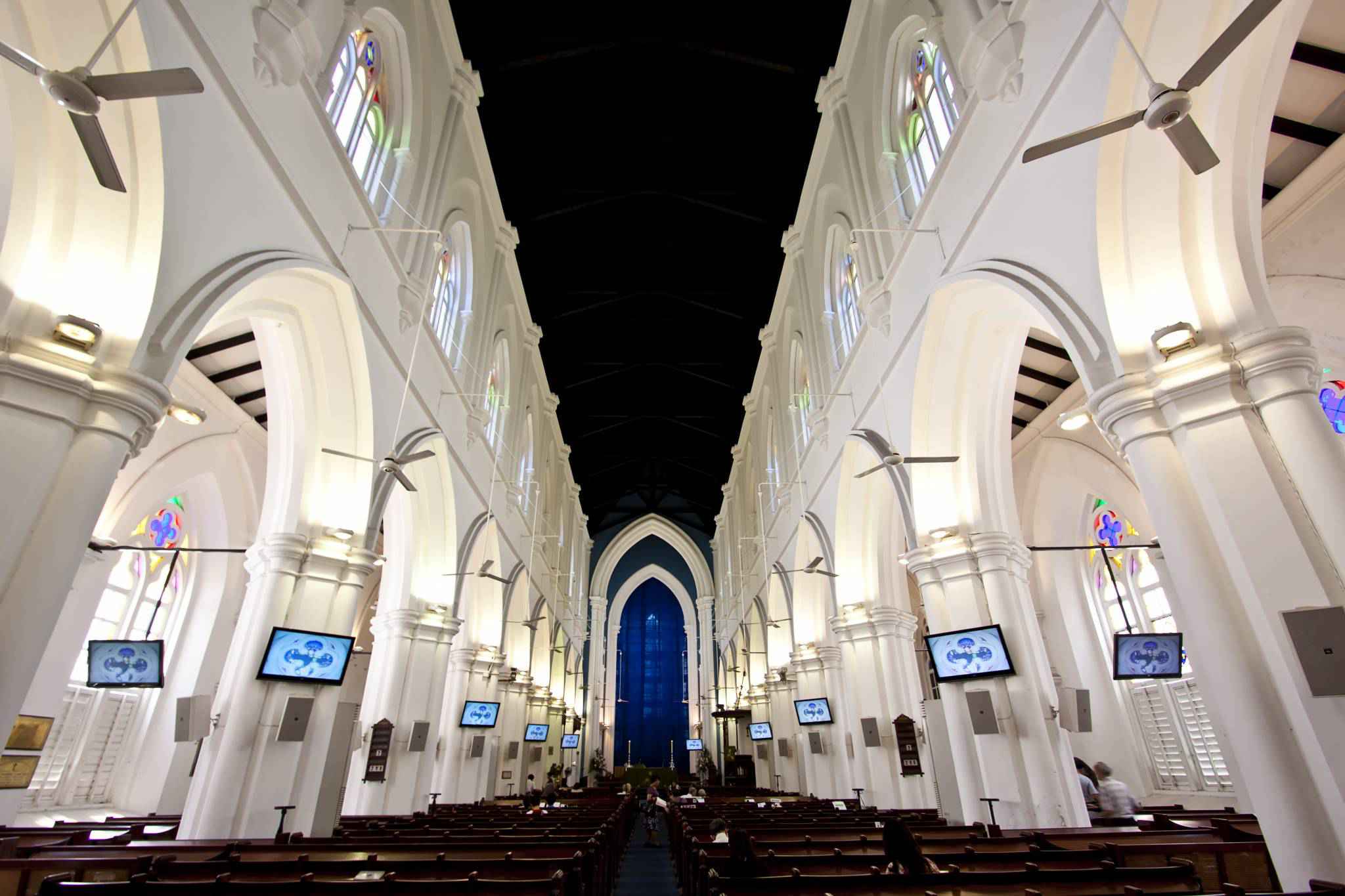