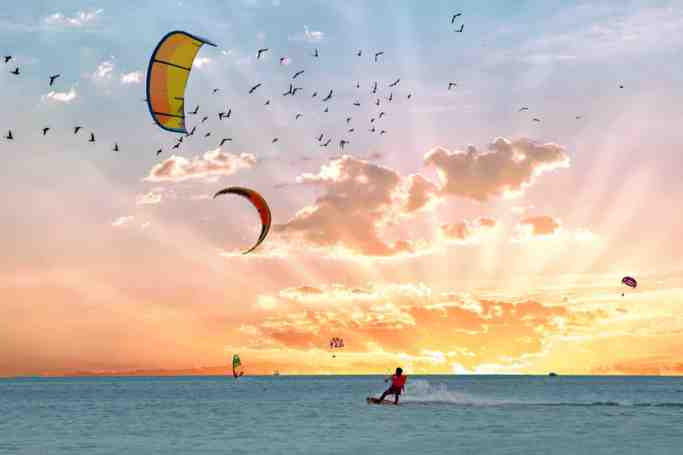 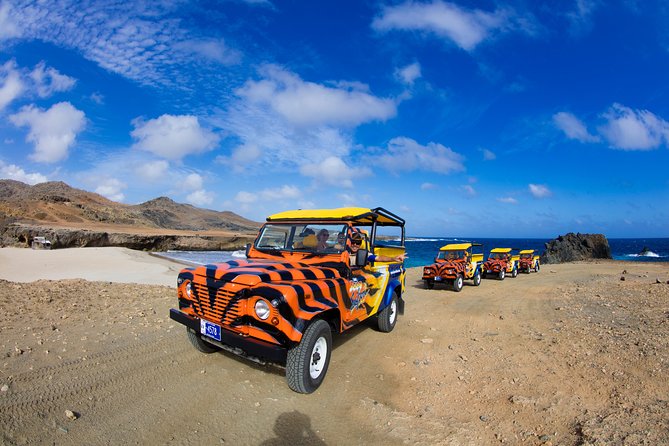 Our Island Ultimate safari is the most epic trips of them all. This is a full-day tour and is considered the most adventurous off-road tour in Aruba’s history! Over a quarter of a million participants have been awed on this classic Aruban off-road trip. We offer you a complete island excursion.

Did you know that this is the only tour in Aruba that offers both the Natural Pool and Baby Beach on the same trip? We will be providing snorkel gear for you, so you can enjoy the underwater world.

- Confirmation will be received at time of booking
- It is recommended that you bring a towel, swimsuit, change of clothes and driver's license
- Cannot accept passengers from Carnival Cruise ships
- Not wheelchair accessible
- Not recommended for travelers with back problems
- Not recommended for pregnant travelers
- No heart problems or other serious medical conditions
- Travelers should have a moderate physical fitness level
- This tour/activity will have a maximum of 160 travelers

Named after a merchant British steamship that was wrecked nearby in 1891. After the accident merchandise was said to have washed ashore, which locals gladly picked and sold in town. Shortly afterwards plans started to build a lighthouse. The keeper lived near the lighthouse. In the present the Lighthouse is fully functional and the keeper's house has been transformed into an Italian restaurant. Here you will hike the area.

On the south-eastern side of the island you will see one of Aruba's most iconic and visited beaches. Here you see young and old enjoying the beautiful turquoise sea with pristine white sandy beach. You won't be able to escape the views of the historic location of this beach in industrial San Nicolas. Here you be able to swim and snorkel

The original Natural Bridge collapsed in 2005, which now you can still see the remains. But fear not, because you will see another natural bridge adjacent to the original one. Not quite as big, but equally stunning, this natural bridge now is the largest in Aruba.Here you will hike the area

Here you will sign in and received detailed safety briefing.

The ruins are the remnants of smelter of gold that there here. The structure is made of volcanic rocks. Through the side or rear entrance you can enter and see sections of the old factory inside. The windows offer beautiful views to the coastline made of limestone and volcanic rocks, where you can admire the rough surf hitting the rocks.Here you will hike the area.

This catholic chapel as it currently stands dates back 1952. It has undergone many renovation and restoration rounds since. The chapel is build at the same location where a more primitive worship stood when this was erected in 1750. Alto Vista chapel is stated to be one of the first places where local native population were converted to Christianity. Nowadays it's mostly visited by Aruba tourists.Here you will hike the area.

Inside the damp and humid caves you see through moist the filtering of minerals the creation of natural columns that are also known as stalactite and stalagmite. Additionally you will see Indian hieroglyphs that stem hundreds of years. Don't be surprised to see long-tong bats at select time of day.Here you will hike the area.

Wariruri is an old Indian word. This attraction is located on the northern, rocky part of Aruba, and is popular among surfers due to its beach and has white sand dunes. It is flanked by a bridge made naturally of limestone and offers one of the most spectacular views anywhere. This natural bridge is currently the second largest of its type in Aruba.

Stop At: Anchor in Memory of All Seamen, San Nicolas Aruba

At one time San Nicolas was the driving force of Aruba's economy. It relied mostly on the economy of the seas. Many European merchants visited to do trades, but also to exchange with other merchants who were passing through. Later when the refinery opened in San Nicolas, Aruba started to receive mega-tankers to load and unload mostly crude and derivatives. As a recognition of the sailors and marine history, the anchor was placed. The contrast and backdrop are stunning and certainly a must see. Picture Opportunity

I would recommend this tour. Uncle Johnny and Suri are so nice and positive! Uncle Johnny does a really good job: the tour was perfectly planned and well-done - we visited lots of places having enough time to enjoy them. His stories about the island of Aruba were full of new information.
By far, we visited:
- the California lighthouse
- local churches
- town of Saint-Nicolas
- the national park
- the natural pool
- Baby beach (snorkeling masks were included)
- caves

Also, a good lunch (with vegetarian options) was included.

This a full day tour but well worth the time. We were picked up at our hotel around 8:05 AM (we were given a 7:45 AM pickup time) and returned to the hotel a little after 6 pm. We were initially transferred to the tour operators HQ where, after completing some forms and being assigned to a jeep, we were provided coffee and a snack. Be prepared for plenty of wind and bumps when riding in the jeep. You get to see and learn about a lot of Aruba, as well as swim and snorkel at Baby Beach and the Natural Pool. A very nice lunch was provided mid-day back at the tour group's headquarters. Tour guides Ivo and Suri were excellent, providing interesting information about the sites as well as life in Aruba and making unscheduled stops to show you additional places. All in all a fun tour and an excellent way to see Aruba beyond your resort.

This Jeep Safari was so much fun thanks to Uncle Johnny, Steph and Marcos, the guides. Uncle Johnny was very informative giving information through out the tour. Make sure this is on your list of things to do!

We had a great time on this excursion. Adam and Abraham were great guides and drivers that made our experience very enjoyable. These men must also be very caring, since they stopped to help an accident victim along the way. Fortunately, Adam and my partner David (who is a paramedic) were able to provide medical assistance to the accident victims until the ambulances arrived. We were treated to an extended cave experience which was great as well.

This trip is one of the best excursions I have been on- so many things wrapped up in one day!
Jonny, Garret and Boss Lady are top notch- very caring and a lot personal attention given:)

For and fun filled day with an excellent lunch this is it. JR our driver was making us laugh and scream on our crazy ride! Uncle John made everyone feel like family, plus we learned about all over Aruba’s famous spots.Wear your bathing suit under clothes and good shoes! Cash is also helpful, for venders. This is a must do

Uncle Johnny and Garreth were amazing your guides and their professionalism and customer service were impeccable! We loved it so much that we booked another tour with them for Thursday!

We had an amazing day, what a value for 9 1\2 hours. Uncle Johnny, Dr. Danny and Abraham were excellent guides, lunch was perfect, this by far the best way to see all the highlights Aruba has to offer!!!

Uncle Johnny was great. Very informative and appreciative our tourist to the island. We had a handicap friend with us and the guides were more than accommodating. This trip was a great way to see majority of the island. A bit bumpy as others indicated, but that created a exciting and fun trip.

Was an amazing experience, Ray, ivol and the boss lady (our drivers) were wonderful making our day so fun, we got to know a lot from the island, we took our 2 and 9 year old and they had a very good time, we definitely recommend this tour 100%, we would do it again.

Our Island Ultimate safari is the most epic trips of them all. This is a full-day tour and is considered the most adventurous off-road tour in Aruba’s history! Over a quarter of a million participants have been awed on this classic Aruban off-road trip. We offer you a complete island excursion.

Did you know that this is the only tour in Aruba that offers both the Natural Pool and Baby Beach on the same trip? We will be providing snorkel gear for you, so you can enjoy the underwater world.

"Made in Aruba" Sightseeing Tour

Octopus The Private Boat From Aruba!