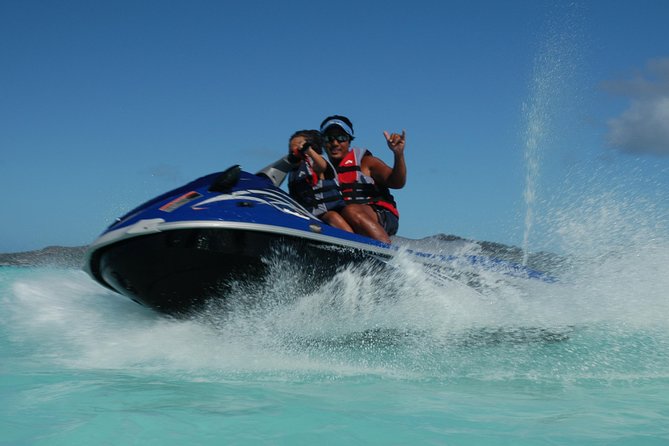 Grab your jet ski for two and take a 2-hour jet ski ride around the famous Bora Bora lagoon in the heart of the Pacific. With no license required and a morning and afternoon departure, enjoy the flexibility this experience offers as you're guided on a journey of the lagoon exploring the outer reefs and the stunning turquoise waters of Bora Bora.

After your hotel pickup, meet your jet ski instructor for an orientation and safety briefing before hoping aboard your Jet Ski. You can choose to ride solo or with a friend on this 2-hour experience.

Monitored by a licensed Jet ski instructor, discover the lagoon of Bora-Bora by jet ski as you maneuver your way around the lagoon.

Travel for approximately 2-hours as you exploring the lagoon's amazing turquoise colors and the stunning outer reef.

Your instructor will make two stops during your two hour experience, the first being a stop on the white sand strip in the middle of the lagoon followed by a stop on a private motu for a lesson on opening coconuts.

Your instructor will return you back to your original departure point at the completion of your two hour experience.

My family had a blast on this jet ski tour! Stopped at a little island and learned all about coconuts! Highly reccomend it for families!

A breathtaking self driven circle of the island. Guide was really nice. It was just us two and a family of three. So the group was small which was nice. The pickup at port was a bit strange, we both had to get on one jet ski with the guide and travel to pick up the jet ski's. Then we where dropped at a beach area to wait for the guide to go get the other family to join us. So a bit of time was spent waiting for others. It was also challenging with three people on the jet ski for the meet up. But the tour was great.

Mohana jet ski gave our group an exciting and safe jet ski experience.
Our group had experience and in experienced jet ski operators and our guide Manu did an excellent job with stops to snorkel and a coconut experience that was amazing.

Loved and a great price paid half of what the others on the resorts paid.

It was an amazing experience!

Everything worked with precision. Really enjoyed the hands on experience with the coconuts.

We had a totally great time and had many beautiful eye candy type photos to take! We stopped several times. Once to take photos with the incredible blue waters, another time to simply do some swimming and lastly to have a coconut husking, cracking open and drinking demo at a beach.
I was able to hit top speeds of 50mph many times (when the water was smoother)!!
The only reason for the 4-star rating was their need to pay a little more attention to detail as we ran out of gas about 500 yards from our dock. We waited about what seemed to be 10 minutes before our guide turned back to get us after making sure the other guests unloaded at the dock. It was SUPER FUN!!!!!!

For our 10th wedding anniversary we thought we would do something special, we were actually on a cruise which stopped off at Bora Bora, when we looked at the cruise ship trips for the island, the one that we liked was the Jet Ski Tour, however there was a small issue regarding the enormous cost of the trip which stopped us booking through the ship. I was still keen to Jet Ski and found this trip on Viator at a considerably cheaper price. We arrived at the quayside as instructed but initially there was a problem, as no one was there to meet us, one of the independent tour guides on the quay, very kindly phoned our contact number and we eventually met up with the tour bus.this is why this trip lost a star We then proceeded to wait for another half an hour while other people arrived for the tour, we were a bit concerned as time was going on and the ship was due to leave about 5.00pm, finally when the other people turned up, we found out that they had booked through the ship, so we knew that it would not go without us.
The trip was amazing, there was a mixture of beginners, intermediates and experienced Jet Skiers, but with some instruction everyone managed to enjoy the experience at there own comfortable pace. The actual skiing lasted over an hour with a stop at one of the islands. A truly fantastic day out, and extremely good value compared to the ship tour cost.

Grab your jet ski for two and take a 2-hour jet ski ride around the famous Bora Bora lagoon in the heart of the Pacific. With no license required and a morning and afternoon departure, enjoy the flexibility this experience offers as you're guided on a journey of the lagoon exploring the outer reefs and the stunning turquoise waters of Bora Bora.

Half Day Group Snorkeling Tour include Sharks and Rays