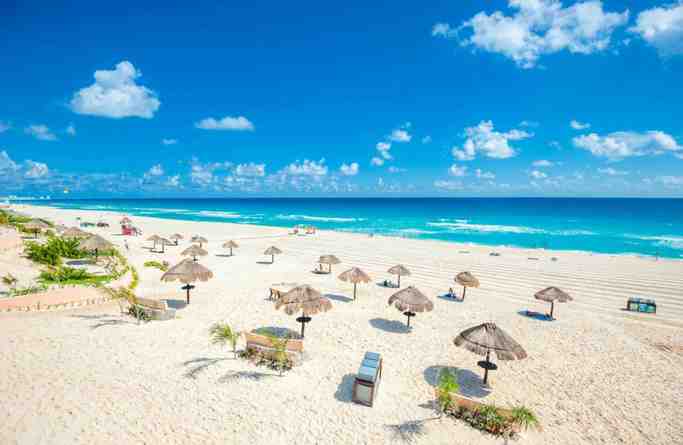 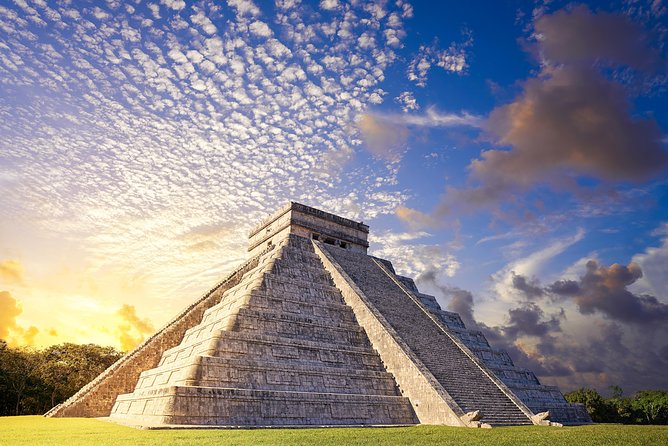 Escape Cancun on this 12 hour full day tour to Chichen Itza, one of the main archaeological sites of Yucatan’s peninsula. Follow your multilingual guide around the site before enjoying a cool swim in a Cenote. Your tour includes a guided tour of Valladolid, a colonial town on the Yucatan Peninsula and is included lunch buffet of regional food with vegetarian options. Round transportation from the meeting point is included

your tour will include a guided tour of Valladolid, a colonial town on the Yucatan Peninsula.

We care about your safety and we guarantee a safe route by toll road to Chichen Itza.

- Confirmation will be received at time of booking
- Not wheelchair accessible
- May be operated in both English and Spanish
- For safety reasons, it is mandatory that you wear a life vest during the visit to the cenote (the cost is not included on the inclusions list)
- All visitors to Chichen Itza need to pay a local tax of $417 mxn or 24 USD. Only credit card payment the day of the tour or before by paypal.
- Valladolid is a town wth many festivities and local traditions, in case the town is closed, we will change the experience visiting the nearby town of Piste.
- Travelers should have a moderate physical fitness level
- This experience requires good weather. If it’s canceled due to poor weather, you’ll be offered a different date or a full refund
- This tour/activity will have a maximum of 99 travelers

Around midday, start your tour in Chichen itza of significant locations at the World Heritage site, including the ball court, el Castillo (the Castle), the Pyramid of Kukulkan and Temple of the Warriors.

Great experience. Thanks much to our bus operator Jesus and our guide Kevin for making this such a wonderful trip. We would definitely recommend this trip, but do remember to take sunscreen, shades, hat and lots of water. It is beastly hot and no shade around the main temple. One can overheat and dehydrate very quickly. The swim in the cenote right after is a very welcome cool down. Jump in. Don’t hesitate. We loved it.

Amazing experience. I was impressed from beginning to end. Rodrigo, Frank and Francisco we’re amazing and made the history of the Mayans come alive. Such a beautiful culture. Highly recommend!!!!

Rodrigo and Frank were excellent tour guides and Francisco was a professional driver that made our 12 hour tour from Cancun to Chichen Itza one of our most memorable tours. After following Rodrigo on the English speaking tour (and Frank on the Spanish speaking tour) of Chichen Itza and orientation of the Mayan culture on our ride to the site we stopped for an authentic Mayan buffet lunch and shopping. We then stopped at a cenote that you had the choice of climbing down about 100 ft where you could jump in from a platform, ease in slowly or dip your legs in the spring fed pool of cold clear water.
We then stopped off at a small town for a break on our return to the hotel. Our tour was the VIP Plus tour that included hotel pick up. We emailed Amigo Tours and requested pick up at our hotel and they notified us of our pick up time. We were the second pick up of about 12 stops that extended the time of the trip to Chichen Itza, however we were also the second stop on the way back. We highly recommend Amigo Tours to Chichen Itza from Cancun with Rodrigo, Frank and Francisco. We were very impressed with the seamless orientation on the bus ride in English and Spanish with both tour guides. We had Rodrigo as our tour guide in Chichen Itza and were very impressed with his knowledge of the Mayan architecture and culture.

Marco was an excellent guide

This tour was awesome! Marco did a great job telling us the Mayan history. He was very knowledgeable. Our group was very impressed! I would definitely recommend this!

My tour was AMAZING. OUR guide Layla was so knowledgeable and I didn't want her to stop talking. The transportation was clean and comfortable and I didn't feel rushed at any location. They really go out of their way to take care of you. Would definitely recommend this to anyone.

it was a good trip, very punctual and disciplined. I liked the tour guide who is well aware of the heritage and history of the Chichen Itza. Buffet was ok though... they try to up sell souvenirs which seem to be very pricey.

The Trip to Chicen Itza was average, the main problem was the long time spent at the local market and the swimming venue. The lunch was very average.
The trip time started at 5am and return at 18:45 too long!! Reduce the market stop and reduce the overall trip time

We were promptly picked up at the hotel. The bus was in excellent conditions, and the 2 tour guides explained some facts about what were going to visit. We then arrived at Chichen Itzá, and the group was divided in two: Spanish speaking and English speaking, and the tour started. We were in the Spanish speaking group. The tour was interesting, but rather short, and was terminated abruptly, leaving us on our own for 45 minutes wandering around. Once we returned to the bus, we found out that the English speaking group had a longer and much more complete and interesting explanation of the Mayan ruins, and they were accompanied by the guide all the way until the end. We found this out because a couple, one Spanish speaking and the other English speaking, once reunited, has two different stories and experiences. We were very disappointed with the Chichen Itzá visit. We then proceeded to a restaurant for lunch (included with the tour), and when we got back on the bus, to head for the Cenote, one of the guides was missing. The other one said he had an emergency and that we would continue without him. We were talking hen taken to the Zahamal Cenote, not the Xcajum Cenote, which was the one we paid for (and the one in the Viator offering). We ended up visiting a dirty and less interesting place, without any explanations on the change of plans. And finally, we were never taken to visit Colonial Valladolid, also offered in the tour package. Summing all up, we were absolutely disappointed with this Viator tour - our experience with Viator in Europe and South America was perfect until now.

The tour itself could be great, but there is SO much waste of time. You leave at 7 from Cancun and arrive in the area of chichen itza mid morning. Now instead of going straight there, they bring you to the cenote first and to eat (very poor buffet, with no WATER included) and then go to chichen itza arriving there at 1pm when it’s super hot!!

The worst part is that we paid for 3 hrs archeological tour un chichen itza. Well, it was a total of 2 hours, and only for 1 hour (or less) we had a guide (who clearly is not an archeologist but just the guide of the tour.

My opinion? Chichen itza was incredible. But don’t go with this tour.

Escape Cancun on this 12 hour full day tour to Chichen Itza, one of the main archaeological sites of Yucatan’s peninsula. Follow your multilingual guide around the site before enjoying a cool swim in a Cenote. Your tour includes a guided tour of Valladolid, a colonial town on the Yucatan Peninsula and is included lunch buffet of regional food with vegetarian options. Round transportation from the meeting point is included

your tour will include a guided tour of Valladolid, a colonial town on the Yucatan Peninsula.

We care about your safety and we guarantee a safe route by toll road to Chichen Itza.

Tulum and Coba Ruins with Cenote Swim and Lunch from Cancun

Cancun to Chichen Itza Day Trip with Admission and Lunch

Tour To Tulum, Coba, Cenote And Playa Del Carmen In One Day

Private Tour: 2 Mayan cities in one day, Tulum and Coba

Chichen Itza and the Cenotes of Yucatan Tour form Cancun