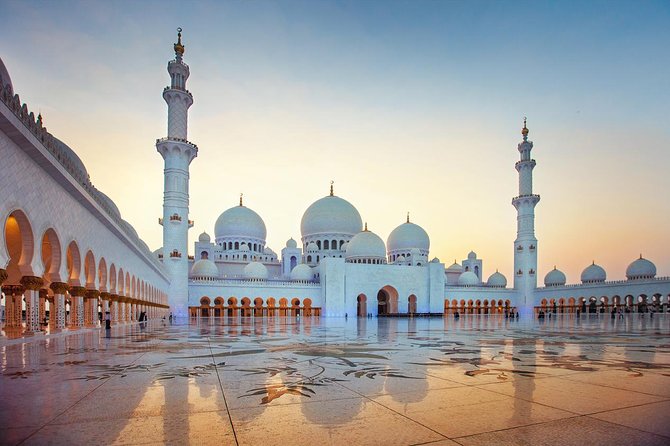 Abu Dhabi has a deep treasure trove of culture and the richest heritage. Explore the history of Abu Dhabi on a 5-hour tour of the largest city in the United Arab Emirates. Visit the Sheikh Zayed Grand Mosque to see a masterpiece of Islamic architecture, marvel at the opulent Emirates Palace, admire the Etihad Towers and more

- Confirmation will be received at time of booking
- Not wheelchair accessible
- Infant seats available
- Most travelers can participate
- The duration of the tour includes the time required for hotel pick-up and drop off
- The pick-up time will be within 45 minutes of your booked tour time. If there are any changes, you will be notified by email
- Mosques have very strict dress codes: women must wear long loose clothing, and ensure their arms and legs are fully covered. Women are also required to cover their heads at all times. A long Abaya with scarf (long black dress attire), Men must not show above their knees and must cover their shoulders. Failure to do so will be a refused entry. The tour operator cannot provide any clothing for men
- It is not possible to visit the Sheikh Zayed Mosque during any Islamic festival
- Tattoos must be covered
- It is not recommended to book this tour on Friday if you have a return flight on the same day, as the drop-off time is dependent on traffic and can not be guaranteed.
- This experience requires good weather. If it’s canceled due to poor weather, you’ll be offered a different date or a full refund
- This experience requires a minimum number of travelers. If it’s canceled because the minimum isn’t met, you’ll be offered a different date/experience or a full refund
- This tour/activity will have a maximum of 15 travelers

Explore one of the world’s largest mosques on a half-day tour, the only mosque that captures unique interactions between Islam and world cultures. Sheikh Zayed's vision for the Grand Mosque was to incorporate architectural styles from different Muslim civilizations and celebrate cultural diversity by creating a haven that is truly diverse and inspirational in its foundation.

(Photo Stop) - The towers are located opposite the Emirates Palace hotel and feature offices, apartments and a hotel. The towers were used as a filming location for the 2015 film Furious 7. In the film, Dominic Toretto (Vin Diesel) and Brian O'Conner (Paul Walker) steal a Lykan HyperSport and drive it through three of the towers.

(Photo Stop) - The design of the building is a playful mix of cherished Islamic architectural elements such as balance, geometry, proportions, rhythm and hierarchical emphasis to create a unified whole. The inspired grand dome with elaborate geometrical patterns dominates over 114 smaller domes spread over the building. The color of the building aims to reflect different shades of sands found in the Arabian Desert.

(Photo Stop) - The Corniche (or Corniche Road) is located in the city of Abu Dhabi, the capital of the United Arab Emirates. The Corniche Road spreads across an 8km long stretch. It forms a sweeping curve on the western side of the main Abu Dhabi island and is replete with cycle paths, fountains and park areas.

(Photo Stop) - The Louvre Abu Dhabi is an art and civilization museum, located in Abu Dhabi, United Arab Emirates. The museum was inaugurated on 8 November 2017 by French President Emmanuel Macron and United Arab Emirates Vice President Mohammed bin Rashid Al Maktoum and Crown Prince of Abu Dhabi Mohammed bin Zayed Al Nahyan. The museum is part of a thirty-year agreement between the city of Abu Dhabi and the French government. The museum is located on the Saadiyat Island Cultural District. It is approximately 24,000 square metres (260,000 sq ft) in size, with 8,000 square metres (86,000 sq ft) of galleries, making it the largest art museum in the Arabian peninsula.

Traveler pickup is offered
We offer pickup from All locations within Dubai, Sharjah, and Ajman. Hotel pick-up and drop-off are offered for this tour. We will send you complete contact information (phone number, email address, etc.) for our local operator to organize pick-up arrangements.

Our guide Mehmood was awesome. Ahead of the tour, he texted me confirming the pick-up time with a very nice greeting. The night before the tour, Mehmood was very responsive when I texted to confirm the pick-up time. Mehmood arrived early before our hotel pick-up in Dubai, and we embarked on a wonderful adventure (with three other folks) on our tour!

Mehmood was extremely responsive to what we wanted to get out of the tour (we skipped some of the sight-seeing stops and spent more time at others that we were more interested in) and ensured us that all he wants is for us to have a phenomenal day in Abu Dhabi. Mehmood was also extremely informative and knew numerous fun facts that he shared about the destinations we visited. Also, he had phenomenal photography skills, and took amazing pictures of our family throughout the tour!

I highly recommend this tour with Mehmood-- not only will you get the best of Abu Dhabi in one day, but you will also get remarkable pictures to remember this day for a long time. Thanks again, Mehmood and Desert Thrill!

Great day out from Dubai..full of visit stops, not enough time to make full/use of entry ticket(s) But plenty of info in prep for a next visit! And loads of time at The Palace..which was best. Mehmood was the best tour guide and very thoughtfull to travellers.. see you soon Abu Dhabi

I've done a bit of traveling in my lifetime and this, hands down, was the worst tour I've ever been on. That is, if you can even call it a tour. In reality it was a glorified car service that drives you to Abu Dhabi and then drops you off at each destination to fend for yourself. The star of the tour is the Grand Mosque where it takes you 20 minutes to walk there and you're given an hour to actually view it. While beautiful, without any background from an actual tour guide it lacks luster. We were only able to make it halfway around before having to literally run back to the van to not be late. They then whisked us off to the Emirates Palace and Ferrari World - and this is where it gets good. We weren't allowed inside the Emirates Palace because we weren't hotel guests so our driver told us we could take a picture outside of the gates. And for Ferrari World we had a total of 15 minutes to stand in front of a few cars and then meet back at the van. Most confusing was these two places weren't even listed in our itinerary and none of us were interested in seeing these things. No bottled water was provided during the entire course of the trip. To make matters worse, we had to pick up two people on the way back to our hotel packing us into the van like sardines. And the driver had the audacity to ask me if he could drop me off on the other side of my hotel and cross the street so he didn't have to make a U-turn. Stay away from this tour!

Abu Dhabi has a deep treasure trove of culture and the richest heritage. Explore the history of Abu Dhabi on a 5-hour tour of the largest city in the United Arab Emirates. Visit the Sheikh Zayed Grand Mosque to see a masterpiece of Islamic architecture, marvel at the opulent Emirates Palace, admire the Etihad Towers and more

Desert Safari from Dubai by Land Rover: Camping and Activities