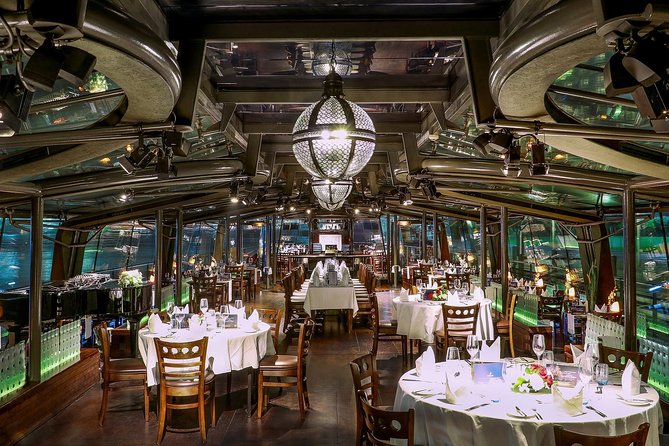 Dubai's Only Luxury Cruise with Freshly Prepared Meals onboard!

Revel in the sights of nighttime Dubai on this memorable dinner cruise on the glass-enclosed ‘Bateaux Dubai!’ Enjoy a welcome drink and canapés and gaze through the boat’s wraparound windows as you cruise along glittering Dubai Creek to key attractions such as the Al Maktoum Bridge, Twin Towers, and Grand Mosque, all illuminated against the night sky. Then, savor a delicious 4-course meal served at your table. Sip on a selection of sodas or house wines, depending on which option you select.

- Confirmation will be received at time of booking
- Minimum age is 5 years
- Important information:
- To enhance your cruise experience, Smart Casual attire is highly recommended. Please refrain from wearing athletic clothing or sports uniforms. Gentlemen are requested to wear long trousers, tailored shorts and closed shoes.
- April 1, 2018 onwards:
- Our regular dinner cruise timings move 30 minutes earlier:
- Board between 7.15pm and 7.45pm.
- The cruise departs promptly at 8pm.
- This tour/activity will have a maximum of 100 travelers

Our cruise route takes us past the captivating sights on both sides of Dubai Creek or Khor Dubai, a 14-kilometre natural seawater inlet. It has played a major part in the region’s economic development and was particularly important for pearl diving. The Creek divides the old city into two parts, namely Bur Dubai and Deira.

Opened on 16th July 2007, this six-lane pontoon bridge on the water was built in less than 10 months to help ease traffic flow. The bridge is 365 metres long and 22 metres wide, with a capacity of 6,000 vehicles an hour. It is open daily from 6am to 10pm and allows boats to pass through at off-hours. It will eventually be replaced by the new, 12-lane Al Ittihad Bridge, which is due for completion in 2017.

One of the oldest witnesses to change in Dubai, the Clock Tower was built around 1963 to mark the country’s first oil exports. It is on a roundabout on top of an underpass and remains a significant landmark when residents give directions to the area. The structure was refurbished in 1972 and the four clock faces were replaced in 2008, removing the need to manually change the hands on the clock.

Numerous wooden dhows and boats, which have traditionally been the vessels of livelihood for members of the region’s local population, make this an area that has remained wonderfully intact since its birth during Dubai’s early trading days.

DUBAI CHAMBER OF COMMERCE
The headquarters of the Dubai Chamber of Commerce and Industry is located inside this 91-metre high building, which was the seventh- tallest building in Dubai at the time of its construction in 1995.

Built in 1998, this 125-metre high building was inspired by the curved hulls of the traditional dhows on Dubai Creek. It houses
the headquarters of Emirates NBD, the largest banking group in the Middle East in terms of assets. The group was formed in 2007, when Emirates Bank International merged with National Bank of Dubai.

This very distinctive building features a large sphere at the top, sometimes likened to a giant golf ball. Completed in 1992, it is 100 metres tall and inside it is the head office of Etisalat, one of the UAE’s telecommunications providers. In 2012, Forbes Middle East named Etisalat the most powerful company in the UAE.

Sometimes called the Rolex Towers, these two 102-metre high buildings were constructed
in 1998. They contain a shopping centre, restaurants, a residential section and offices.

It has been suggested that more than 10 tons of gold is present at any time in this souk,
or traditional market. Hundreds of shops sell and make jewellery here. Dubai’s free trade policies have encouraged Indian and Iranian entrepreneurs to set up shops in the souk, spurring a growth in gold trade during the 1940s and continuing today.

The narrow lanes of this traditional souk (or market) are lined with open-air and
closed-roof stalls that sell fragrances, spices, frankincense, incense and herbs. It’s a sensory journey to walk through the fragrant souk, where textiles, rugs and artefacts are also sold.

Created in 1997, this village in the Shindagha historical district showcases a glimpse of what traditional life in the UAE was like during the pearl diving era. Craftsmen sell handicrafts
in characteristic barasti houses and there are some displays depicting scenes from the time

This classic and beautifully restored historic building in Shindagha was originally established around 1894 as the seat of the
Al Maktoum family. Sheikh Saeed Bin Maktoum Al Maktoum, ruler of Dubai from 1912 until 1958, lived here. Today, the house is a museum that contains artefacts, old coins, stamps and images of old Dubai.

This museum is situated in Dubai’s oldest existing building - Al Fahidi Fort - which was built in 1787. Opened in 1971, it features an extensive presentation of traditional life in pre-oil Dubai with dioramas and local antiquities on display.

Excellent!! we had a great evening !! the meal was really delicious.I recommend this activity. Thanks to the hosts

We enjoyed a delicious dinner whilst enjoying night views of Dubai from the Creek. Staff were friendly and we could not fault the service. We chose the option that included alcohol and found this to be good value.

From start to finish this was an amazing night! Staff excellent, food fabulous and entertainment amazing! This is my second time cruising with Bateaux and won’t be the last! Well done Bateaux for making memories x

Where shall I start. From the moment my family and I boarded the cruise the whole experience was fantastic. The service was top notch never had to ask for a drink or anything they were very attentive. The food was cooked to perfection and what a fabulous choice. The boat itself looked like a 5* restaurant it was amazing worth every penny and more.

The cruise was superb. Delivered on all fronts. Service was excellent..food was delicious..the icing on the cake was the pianist and the singer. Absolutely loved it!!

We went for our 15 wedding anniversary. Me and my wife had a memorable time.

One of our best anniversary celebrations.

A very good nightout experience on Bateaux dinner cruise. Good food and alot of drinks. Your staffs are very friendly and very sociable. Thank you.

If I could give a 0 I would have! We booked and after checking out and paying the system kept on throwing us off. Eventually went through but the wrong day. Re booked and when we got notifications from our bank money was taken of twice! We then immediately send them a email and there response was we can not refund you! Shocking as this is theft! Still waiting for management to contract us and refund us for the 1st booking!!!!!!!!

Dubai's Only Luxury Cruise with Freshly Prepared Meals onboard!

Revel in the sights of nighttime Dubai on this memorable dinner cruise on the glass-enclosed ‘Bateaux Dubai!’ Enjoy a welcome drink and canapés and gaze through the boat’s wraparound windows as you cruise along glittering Dubai Creek to key attractions such as the Al Maktoum Bridge, Twin Towers, and Grand Mosque, all illuminated against the night sky. Then, savor a delicious 4-course meal served at your table. Sip on a selection of sodas or house wines, depending on which option you select.