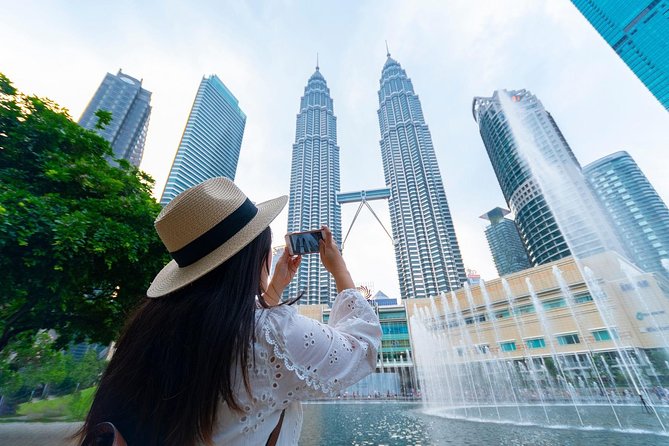 - Confirmation will be received at time of booking
- Not wheelchair accessible
- Infants must sit on laps
- Most travelers can participate
- This is a private tour/activity. Only your group will participate

During your visit to the Petronas Twin Towers, ride up to the observation deck, located about 557 feet (170 meters) above ground, and take unforgettable photos while you marvel at the cityscape from the Skybridge.

The magnificent Batu Caves are one of the top tourist attractions in Malaysia. this 100-year-old temple features idols and statues erected inside the main caves and around it. Incorporated with interior limestone formations said to be around 400 million years old, the temple is considered an important religious landmark by Hindus.

See magnificent Merdeka Square, a symbol of Malaysian independence and one of the most picturesque squares in the world. Admire architectural masterpieces of modern and colonial era. A 95-metre flagpole, one of the tallest in the world, is located at the southern end of the square.

Next, see the stunning National Mosque of Malaysia (Masjid Negara), set in 13 acres of beautiful gardens. Admire the bold approach taken by its architects who designed it in the late 1950s as a symbol of the aspirations of the newly independent nation.

Pass by from the first ever railway station building built colonial time.

Head to Chinatown where you can stroll the streets and shop alleyways packed with food stalls selling a wide range of foods and local goods. Once you've mastered the art of negotiating for bargains.

Drive to Thean Hou Temple, a 6-tiered pagoda temple atop Robson Heights. Completed in 1987 and officially opened in 1989, it was built by the Hainanese community of Kuala Lumpur and is dedicated to the goddess Tian Hou (The Heavenly Mother).

The Malaysian equivalent to Buckingham Palace, Royal King's Palace (Istana Negara) attracts thousands of visitors with its golden domes and Islamic-style architecture. Although you can’t explore the palace, you can learn about the Malaysian monarchy.

Ganesh was very informative and gave information throughout the tour. There was plenty of time given at each site. English was very understandable, best of all the tours I had in Southeast Asia. Very willing to answer any questions. Thourly enjoyed my day.

Ganesh was an excellent tour guide. He was prompt and thoughtful. He was very knowledgeable about Malaysian history especially Kuala Lumpur's showing us the old city, Batuu caves, Hindu temples, mosques, Sultan's palace, government buildings and the iconic Petronas twin towers. We came away feeling like we'd learned so much.

We took this full day tour with Vikram our driver and guide. We had an excellent
day, Vikram was polite and helpful the whole day and took many pictures for us which have given us many happy memories. I would not hesitate to recommend this tour and Vikram as a guide

Excellent value. Though you could reach all of the destinations included in this tour on your own, it was worth it to have someone who could skillfully navigate the horrendous traffic of KL. Bala, our driver, was a very good guide, eager to please, explaining the different sites, and included a non-scheduled stop at a local hot springs.

We booked this tour as a shore excursion and were promptly picked-up by our driver and tour guide Segar from the ships pier. This being a private tour was wonderful because we were able to be so flexible in what we wanted to do. Segar was a wonderful tout guide, very knowledgable and took great pictures for us, no need for that selfie stick. Also I must mention that we wanted to visit the Petronas Towers at night to see the city at night and also the dancing light show to music in the back of the Petronas, he made it all hsppen!!!! Bravo and thanks to Mr. Segar :))

Having arrived in KL from Singapore we were immediately struck by how busy the city was. Fortunately we booked the Full Day Kuala Lumpur tour and were treated to a first class guided experience by Vikram. We knew we were going to the Petronas Towers and the Batu caves however the tour was so much more than that. We were picked up from our hotel and driven around the centre of KL where we visited the Grand Mosque and also took in the historical colonial core, including Independence Square, and then on to the Towers. Vikram provided us with interesting background on a host of sites before making sure we got to the correct group for the Petronas experience. He then picked us up and took us out to the Batu Caves giving us yet more information on the hindu temple.We then headed back into the city where we saw the National monuments, Royal Palace, Botanic Gardens and a fabulous Chinese Temple. We then stopped for a late lunch in a restaurant that has never appeared on Tripadvisor but was outstanding before finishing up at the Batik factory.

This was a fabulous trip with a fabulous guide and would strongly recommend that you ask for Vikram if you are considering taking the Tour . He made a vibrant city tour very special and has encouraged me to go back to KL as there was so much to see.

Vikram is the best photographer!!! All of my social media pictures are perfect, he was very patient, and very accommodating, also gave me my space when I needed it, very knowledgeable

Was staying in Singapore and wanted to do a one day jaunt to KL which is only a hour flight away.
First of all .out tour guide Ganesh was terrific. We could not have asked for more patient and informative guide.
Ours was a scheduled full day tour but we decided to cut it short after seeing my main goal which was the Temple with the tall statue. It was absolutely stunning to see in person..just as it looks in the pics online.

The guide was hard to understand and didn’t seem to have a lot of patience explaining. The scope of the tour was fine. We need a guide that was more passionate about his job.

The Best of Kuala Lumpur at Night Tour