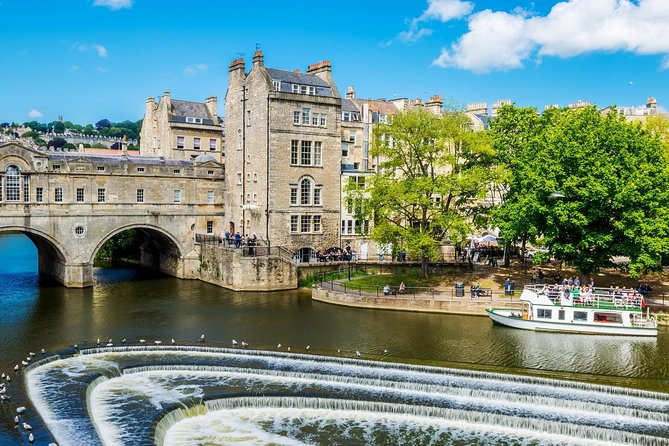 Visit the Neolithic site of Stonehenge - one of the wonders of the world, and shrouded in mystery. Then relax in the beautiful city of Bath with its Georgian architecture and picturesque streets. * Enjoy a traditional cream tea in Bath (if selected this option).

- Confirmation will be received at time of booking
- Not wheelchair accessible
- 8.45am at the Original London Visitor Centre. Please wait just inside the door on the left hand side.
- The tour will end at approximately 7.00pm at the Victoria Train Station (traffic dependent)
- Cream team option in Bath. If you do have any dietary requirements please let us know at least 72 hours in advance so we can advise the bakery. Please note that some requests may not be able to be fulfilled.
- Stroller accessible
- Near public transportation
- Infants must sit on laps
- Travelers should have a moderate physical fitness level
- This tour/activity will have a maximum of 16 travelers

Originally built as a place of well-being and relaxation by the Romans thousands of years ago, Bath is home to Britain’s only natural thermal hot springs. Travel through thousands of years of history in one city; marvel at the 18th-century honey-coloured Georgian architecture and see the ancient Roman Baths. Afterwards, relax and enjoy a traditional English cream tea beside the River Avon at Brigit's Bakery, with scones, clotted cream and jam (If selected this option).

The Royal Crescent is a row of 30 terraced houses laid out in a sweeping crescent in the city of Bath, England. Designed by the architect John Wood, the Younger and built between 1767 and 1774, it is among the greatest examples of Georgian architecture to be found in the United Kingdom and is a Grade I listed building. Although some changes have been made to the various interiors over the years, the Georgian stone façade remains much as it was when it was first built.

One of the most photographed examples of Georgian architecture in the city and one of only four bridges in the world to have shops across its full span on both sides, Pulteney Bridge was designed in 1769 by Robert Adam.

Step back 5,000 years in time to prehistoric Britain as our guide helps bring the history of this fascinating monument to life. Who built Stonehenge? Why was it built? Discover the answer to these questions and the monument’s fascinating link to the Summer and Winter solstice. Come face-to-face with a 5,500-year-old man and visit the world-class exhibition centre, with 250 ancient objects on display.

Visit the Neolithic site of Stonehenge - one of the wonders of the world, and shrouded in mystery. Then relax in the beautiful city of Bath with its Georgian architecture and picturesque streets. * Enjoy a traditional cream tea in Bath (if selected this option).