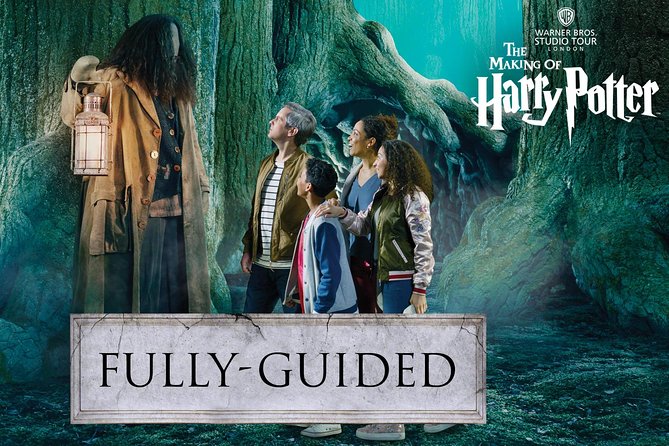 Go behind the scenes of the Harry Potter movies at the Warner Bros. Studio Tour London – The Making of Harry Potter. Accompanied by a guide, you'll explore the studios for three hours to see costumes, props, and sets from all of the beloved movies. Peek inside Dumbledore's office, stroll down Diagon Alley, and much more. Round-trip train travel from London is included.

- Confirmation will be received at time of booking
- Please note: Due to issues beyond the local tour operator's control, timings and sites are subject to last-minute changes on rare occasions
- The total duration of the tour is 5 hours, comprising a 1-hour travel time to the studios, a 3-hour guided tour, and a 1-hour travel time back to London
- Not wheelchair accessible
- Near public transportation
- Infants must sit on laps
- Travelers should have a moderate physical fitness level
- This tour/activity will have a maximum of 15 travelers

Your journey starts in Central London where you'll meet your tour representative, a preferred partner. Travel by train directly to the Warner Bros. Studio Tour London.

When you arrive, enjoy timed access and be greeted by a dedicated Studio Tour guide who reveals the wonders you'll encounter throughout your tour of the original sets, props, and costumes from all eight of the Harry Potter films. You will be given your own personal headset to ensure you do not miss any of the fascinating behind-the-scenes facts.

Start your experience with a short film in the cinema before you enter the iconic Great Hall set. Your guide shares production secrets and inside information and tells you about the processes used to bring the films to life. Take a look inside Dumbledore’s office, and walk along cobbled Diagon Alley, which features the shop fronts of Ollivanders, Flourish and Blotts, Weasleys’ Wizard Wheezes, Gringotts Bank, and Eeylops Owl Emporium. Visit the original Hogwarts Express locomotive and a recreation of Platform 9 ¾. Climb aboard the train carriage and pose with a luggage trolley as it disappears through the platform wall.

Other sets you can see include the Gryffindor common room, the boys’ dormitory, Hagrid’s Hut, the Potions classroom, and Professor Umbridge's office at the Ministry of Magic. Throughout your tour, you'll be captivated by secrets and insights from your guide.

Once your guided tour comes to an end, you have the option to re-enter the Warner Bros. Studio Tour London at your leisure, find that perfect Harry Potter souvenir at the Studio Shop, or purchase a coffee at the Studio Tour Cafe. When you are ready to head back to central London, your representative will have your provided train ticket and information needed for an easy journey.

This guided experience at Warner Bros. Studio Tour London – The Making of Harry Potter is the only tour of its kind, so if you're a fan of the wizarding world, it's a must-do. Until Sunday 23rd September 2018

Visitors are invited to discover behind-the-scenes secrets of Harry Potter and the Goblet of Fire as Warner Bros. Studio Tour London launches a special feature dedicated entirely to the fourth installment of the magical film series, revealing secrets behind the characters, costumes and props that made it so special.

This was so much fun. Our tour guide was extremely knowledgeable. We really felt like we were able to learn a lot about everything that went in to making Harry Potter. I really liked that they kept the groups to a smaller size. (I think it was 15) It allowed us to move around without too much trouble. Everything was just as I expected, and more.

Recommend highly the fully guided tour. Worth the expense. Guide was knowledgeable and gave us background materials we would not have gotten. Also after the tour we went back and spent more time taking pictures. Spent the whole day.

Great experience, this really was the perfect way to visit Harry Potter Studios. The guides were very knowledgeable and provided a first class service, from the initial meet to the journey back. 100% recommend this to any one thinking of visiting!!!

This tour was the best decision we could have made for our first trip up to the WB Studios. The tour guides made the day such a seamless, enjoyable experience. Starting with the meeting point and having someone there to help manage getting the entire group on the train and then on the bus to the WB Studios. From there she handed us off (with our return bus and train ticket to get home) over to the WB tour guide who led our group on a guided tour of the WB studios. We got to skip the general line to enter the studios and go through a VIP entrance, which is another thing that made this tour so worth it. Since there is so much to see and do, the guided tour is necessary and then what was nice was that at the end of the guided tour (which took about 3 hours) we were able to go back and check out things we missed our wanted to spend more time checking out (i.e. one of the many photo opps). We picked the earliest available tour so that we would have the most time possible to see everything we wanted to. It was a magical day and I cannot say enough good things about this tour. I would highly recommend you choose this option if it's your first time going to the WB Studios.

I am already promoting this venue to all our friends and family at home. We will definitely come again!!

Had a great guild from London to the gates of the studio. A Warner Bros guide took over and had all the insights and details about character, set and plot development. The only way to visit for true fans!

It was a dream come true for me. I am a Potter fanatic!! Yes, even at my age. When I come to London again I am going to take the tour again. Oh, and if you can get a message to Hannah, my guide, she was phenomenal. This was something I am so glad that i did. Next time I might like to come at Christmas!!!

This was an amazing tour in every sense of the word! I'm a Harry Potter fan, but not a superfan, so I thought I'd probably be a little bored with lots of time to spare on this tour. I was SO WRONG! Not only did they have to drag me through the air hanger full of sets, costumes, creature effects, concept art, and models, I felt like my eyes didn't have the time to soak up all the treasures on the tour. And the guides--AWESOME! They made the travel to the studios very simple, gave us tons of details and insider info on the films, and even took out some of the props for us to examine! I couldn't have had more fun if I tried. Even if you aren't a Harry Potter fan, this is not to be missed!

As a huge Harry Potter fan, my husband loved this tour. Me, I thought it was okay.

Our 9:15am tour met outside the Euston Station in front of a Euston War Memorial. Be advised, that station is SUPER busy.

Our City Tours coordinator, Ryan, was there when we got there a few minutes early. He was very friendly and enthusiastic. Gave us stickers to identify us as CITY TOURS participants and even had a cool flag with the company logo on it.

Our group of 30 people soon followed him onto Platform 9 to get on the 9:35am train to Watford Junction. When we got off the train, we waited in line for the Warner Bros Studio Tour bus, which was probably another 20-30 minute wait. That bus then drove us to the front of Warner Bros.

We walked towards the entrance and were met by two Warner Bros employees who would be conducting the tours for us (15 in each group). At this point, our City Tours coordinator, Ryan, had given us our return train tickets and left us in good hands with the Warner Bros employees. I thought it was neat that they have this great arrangement between City Tours and Warners Bros, because it would have been tricky for us to have gotten there on our own.

Our tour guide was great. Can't remember her name but she was very enthusiastic and gave us great information that we would have never have gotten just walking on our own. The studio was very crowded, even in late October so it was a bit hard getting around, especially when non-tour people would hang around our group to listen to our tour guide's presentation.

My one suggestion for people booking this tour: Do the early tour. We did the 9:15am tour leaving from Euston Station. When we got to Warner Bros, it was a nice-sized group. When we concluded around 1pm, the place was a madhouse, so we were glad we went early.

This tour is definitely well worth the money because you get transported there and go on a VIP tour versus just meandering on your own. But make sure to book it in advance because it sells out fast!

Go behind the scenes of the Harry Potter movies at the Warner Bros. Studio Tour London – The Making of Harry Potter. Accompanied by a guide, you'll explore the studios for three hours to see costumes, props, and sets from all of the beloved movies. Peek inside Dumbledore's office, stroll down Diagon Alley, and much more. Round-trip train travel from London is included.