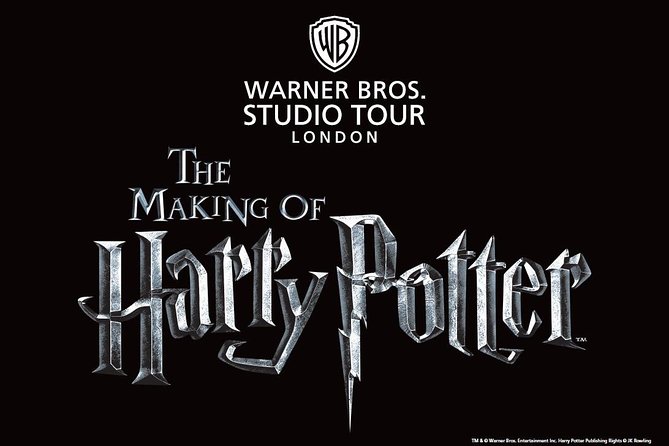 Delve into the magical world of Harry Potter™ at the Warner Bros. Studio Tour London, with round-trip luxury coach transport included. Follow in the footsteps of Hogwarts’ students as you walk around original sets like Diagon Alley and Platform 9 ¾, complete with the Hogwarts Express steam engine. Get up close to costumes and props, and discover the wizardry required to create the mind-blowing special effects and animatronics.

- Confirmation will be received at time of booking
- Minimum age is 5 years
- Infant (aged 3 & 4) travelling must be notified in advance and rates apply for the return transportation.
- Infant (aged 2 and under) travelling must be notified in advance.
- Not wheelchair accessible
- Stroller accessible
- Infants must sit on laps
- Most travelers can participate
- This tour/activity will have a maximum of 50 travelers
- Face masks required for travelers in public areas
- Face masks required for guides in public areas
- Face masks provided for travelers
- Hand sanitizer available to travelers and staff
- Social distancing enforced throughout experience
- Regularly sanitized high-traffic areas
- Gear/equipment sanitized between use
- Transportation vehicles regularly sanitized
- Guides required to regularly wash hands
- Regular temperature checks for staff
- Temperature checks for travelers upon arrival
- Paid stay-at-home policy for staff with symptoms
- Contactless payments for gratuities and add-ons

Amazing experience, truely magical. One particular staff member who know all the names of the cast and most crew in the final room was especially brilliant!!

Perfect for fans of Harry Potter. Fascinating to see all the sets, props and drawings. The model of Hogwarts is insane!!

We took the bus trip which included tickets to the Harry Potter Sruidios but without a guide. This enabled us to go at our own pace and see things we wanted, stop and rest, look around and do things at our own pace. the bus was comfortable and pleasant. We had more than enough time to enjoy the world of harry and all that it entailed. I highly recommend a visit to this magical place with or without children. Adults and children alike will be captivated by the excplanations, costumes, sets, clips and scenery. A really wonderful experience.

I travel alot with my job and like to do tours in the different countries I visit. I have used viator several times and I'm never disappointed. They run a professional smooth operation and I have never had a problem. I can relax and enjoy my tour because I know I'm in good hands..thank you!

This trip was a dream! The bus arrived on time, but the trip to the studio took longer than expected due to traffic. Despite this, the ride was enjoyable because I had chosen a Harry Potter movie that was played during the drive. The bus driver was so nice, but I’m unsure why the lady yelling into her phone was even with us.
We were slightly confused upon arrival because no one explained anything super clearly. They told us it was a self tour, but once you’re in, there’s about 30-60 minutes of a guided tour with a movie in the cinema.
Additionally, we attended when schools were there on field trips... this made it a little hard to enjoy. We walked backwards through the stages and were able to see and do a lot that we missed since there were SO many kids... I’d try to go on a day with no big groups present if I ever did it again.
The reality is, you don’t have time to stop and read the descriptions of every single item or display you see, but it is possible to see it all in 3-4 hours. Also the passport books are for the presses in different locations. No one told us that either!
Despite some logistical issues, the experience was INCREDIBLE and overshadows everything else. You see and touch and take photos with so many props, sets, and costumes from the movies. Magic is brought to life like never before. You will not regret this tour!!!!!

It was deff woth the money! I just can not express how amazing it all was, would 100% recommend the tour to every one, fan or no fan.

Was fascinating.impressive props and amazing attention to details.really enjoyed it.recomed it to one and all.its a must for young and old.

Bus was a little
Late and difficilt to find correct spot at coach station. Otherwise everyone was friendly and helpful. Things went smoothly. Experience at Warner brothers is fantastic.

Very difficult to figure out what gate to meet out. The person at gate zero was for another tour group and WAS VERY VERY VERY RUDE when we asked if we were at the HP tour. Better tour signage would help.

Delve into the magical world of Harry Potter™ at the Warner Bros. Studio Tour London, with round-trip luxury coach transport included. Follow in the footsteps of Hogwarts’ students as you walk around original sets like Diagon Alley and Platform 9 ¾, complete with the Hogwarts Express steam engine. Get up close to costumes and props, and discover the wizardry required to create the mind-blowing special effects and animatronics.

Magic of Film Tour with Quizzes