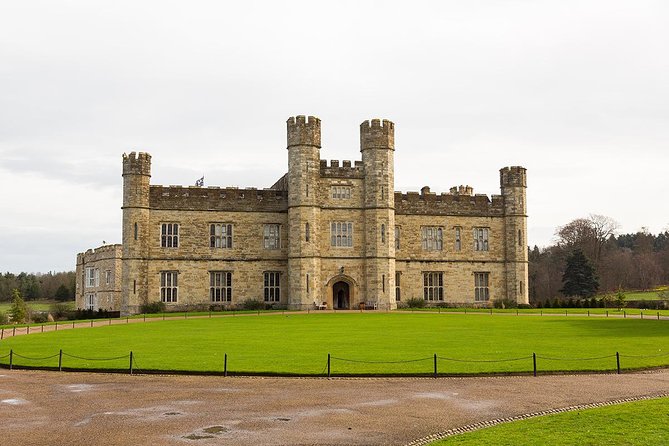 Escape the hustle-bustle of London for a day and travel to the English countryside for a tour of Leeds Castle, Canterbury Cathedral and Dover. Enjoy a private viewing of beautiful Leeds Castle before the doors open to the public, get an exclusive tour inside UNESCO World Heritage–listed Canterbury Cathedral, and admire the symbolic White Cliffs of Dover. Listen to your guide's expert commentary throughout the day through your personal headphones.

- Confirmation will be received at time of booking
- Children under 16 years must be accompanied by an adult
- Not wheelchair accessible
- Near public transportation
- Infants must sit on laps
- Travelers should have a moderate physical fitness level
- This experience requires good weather. If it’s canceled due to poor weather, you’ll be offered a different date or a full refund
- This experience requires a minimum number of travelers. If it’s canceled because the minimum isn’t met, you’ll be offered a different date/experience or a full refund
- This tour/activity will have a maximum of 51 travelers

Greenwich is a borough in London, England, on the banks of the River Thames. Known for its maritime history, it's home to the Cutty Sark, a restored 19th-century ship, the huge National Maritime Museum, and the classical buildings of the Old Royal Naval College. The modern O2 arena sits on a peninsula to the north. Overlooking peaceful Greenwich Park, the Royal Observatory is the site of the Greenwich meridian line.

A designated UNESCO World Heritage Site, Canterbury Cathedral is both a serene place of holiness and beautiful tourist destination. As the Cathedral of the Archbishop, the spiritual leader of the Church of England, Canterbury holds a special place in British history. No ordinary Cathedral, Canterbury has a long history that is often described as ‘England in Stone’; from the role of its Archbishops in the Magna Carta to the murder of Thomas Becket after a power struggle with the King of England, Canterbury’s history is intertwined with that of England. Founded by St Augustine in 600 AD, the Cathedral today is one of the finest examples of Gothic architecture in England, and the first building in the country to be redesigned in this popular style in 1774.

Dover Castle is a medieval castle in Dover, Kent, England. It was founded in the 11th century and has been described as the "Key to England" due to its defensive significance throughout history. It is the largest castle in England.

Soaring 350ft above the crashing waves of the English Channel, the White Cliffs of Dover are an instantly recognisable landmark of Britain. From Caesar to Shakespeare, some of history’s most important figures recognised the towering symbolism of the cliffs. Traditionally the site where British royalty would welcome overseas visitors, the cliffs served as an intimidating reminder of Britain's immovable resoluteness sense of independence.

Located in Kent, ‘The Garden of England’, lies Leeds Castle, a beautiful medieval castle frequently referred to as ‘the loveliest castle in the world’. With 500 acres of landscaped parkland to explore and impeccably maintained gardens to enjoy, it’s easy to see why this beautiful castle was a favoured castle of King Henry VIII, who gifted it to his first wife, Catherine of Aragon.

In its 900-year history, the castle has been home to no fewer than six queens and served many functions, including acting as a garrison, prison and the stately private home of its most recent owners. Learn all about this and more as our expert tour guide brings its fascinating story to life.

Evan Evans Tours is the oldest and largest sightseeing company in London and has been accompanying visitors on city tours and out-of-town excursions since 1930.

Evan Evans Tours is owned by The Travel Corporation of 25 highly successful travel and tourism companies including Trafalgar Tours, Insight Vacations, Contiki Holidays and Red Carnation Hotels. The Travel Corporation is committed to maintaining the highest standards of quality and guest service and this this follows for each individual brand.

I dont usually like coach tours but this one was great! Chrissie was our guide and she was very engaging and knowledgeable. Our driver, Paul, was also great! Leeds Castle was lovely. Canterbury Cathedral was breathtaking. Chrissie did a great job leading us on a tour of the Cathedral. We were lucky that our group was relatively small (27). Dover was only a photo stop but it was beautiful.

Norma led us on a fun, fact-filled day of great interest. She was lively and engaging and explained everything we saw. She was very friendly and knowledgeable so it made a great sight-seeing day! I highly recommend this tour.

Had a wonderful tour on Jan. 11th.

Our tour guide was great and very informative and our driver did a fantastic job taking all of the back routes so we could experience the great countryside views.

Kevin, our guide, and Steve, our driver, were courteous, informative and knowledgeable. Both were also very helpful to me because I had a hip pain issue. The sites we visited are beautiful. Perfect choice for us.

Beautiful castle well worth seeing .The cliffs of Dover is a must to check off your bucket list.Canterbury is o full of history that it was a must.Lesley our guide was fantastic.She is very well versed in England's history,and Paul our driver gave you confidence in his driving.DaveL

Our guide Chrissie (Evan and Evans tours) was really wonderful. Very knowledgeable and full of fun general info about the sites on the road to the 3 locations. Also interesting was that day the tour was conducted in a second language so fun to hear Chrissie doing a second description in Japanese! Leeds Castle time was 1.5 hours; plenty of time to explore the castle rooms and some of the grounds. Private tour guides are not allowed in the castle so we got some general information (supposedly it is to be done by one of the people on the castle grounds but since we were about an hour late due to traffic the info was given by Chrissie) about the site and then we were left on our own to explore. Interesting history surrounding the castle and seeing the rooms and furnishings was fascinating. Don’t miss the Dog Collar Collection which is located on the grounds of the castle. Strange to see such a collection but really worth a couple of minutes of your time. Dover Cliffs was just a 15 minute stop but it was noted as just a short photo-op in the description. You would need a whole day tour to explore that site with the caves and surrounding locations. Canterbury Cathedral is under construction until 2021 but still worth a visit at this time. Chrissie did a very thorough and educated walking tour (we had headsets where we could listen to her descriptions of the cathedral). Seeing the work that is being done was fascinating even though some areas were obstructed by scaffolding and roped off but still worth a visit at this time. I’m hoping to go again when the work is done to see the results. All in all a very enjoyable day which started at 9am (give yourself enough time to find the bus port. It took about 15 minutes of exploring the area after exiting the Victoria Station Underground to find where the busses departed) and we were dropped off at about 8pm. Only thing I would say is book it directly with a tour company. Though Viator was efficient and communication was excellent, you don’t know which tour company you’ve booked until you receive your confirmation. When I looked up Evan and Evans’ price on their site I found I had paid approximately $35 more by booking it through Viator. There are probably other companies that are available as well since many different packages for this excursion were available, so if you book directly through them you might save the cost of the middle man (Viator) who lists many different tours on their site.

Monica was our guide and Mo was our driver.
We were taken care of wonderfully and extra attention was paid to each individual tourist
Very well done

Debra was the best. Extremely knowledgeable and shared many personal stories that enhanced the experience.

Escape the hustle-bustle of London for a day and travel to the English countryside for a tour of Leeds Castle, Canterbury Cathedral and Dover. Enjoy a private viewing of beautiful Leeds Castle before the doors open to the public, get an exclusive tour inside UNESCO World Heritage–listed Canterbury Cathedral, and admire the symbolic White Cliffs of Dover. Listen to your guide's expert commentary throughout the day through your personal headphones.