London in One Day Sightseeing Tour Including Tower of London, Changing of the Guard with Optional London Eye Upgrade 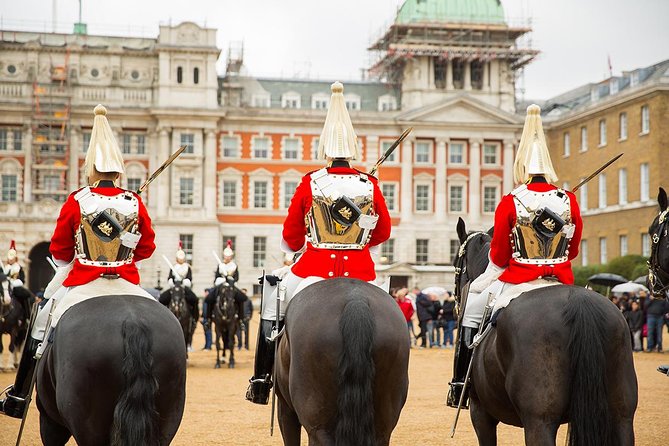 See London on a full-day sightseeing tour of the city, led by a guide. Hear the history of top London attractions like Westminster Abbey and Big Ben, and a guided tour of St Paul’s Cathedral. After the sightseeing tour, watch the Changing of the Guard Ceremony at Buckingham Palace and tour the Tower of London. As a bonus, this experience also includes a one-way River Thames sightseeing cruise, which can be used on the day or another time. Upgrade to include a flexible London Eye ticket to be used on any day you wish.

- Confirmation will be received at time of booking
- Please note: St Paul’s Cathedral is closed to the public on Sundays and special events or services. We will stop for photographs at St Paul's Cathedral and spend longer at Tower of London instead
- Please note: St Paul's Cathedral is closed on the following dates: Jan 28th & 31st, Feb 26th, April 10th. There will be a photo stop outside the Cathedral and longer time spent at the Tower of London.
- Occasionally there may not be a Changing of the Guard. On these occasions you will visit Horse Guards Parade, built on the site of the jousting yard of the old Whitehall Palace
- Not wheelchair accessible
- Near public transportation
- Infants must sit on laps
- Travelers should have a moderate physical fitness level
- London Eye closure Their Annual Maintenance dates are scheduled as 6th January to 21st January 2020 (inclusive) (If you selected this option)
- This experience requires good weather. If it’s canceled due to poor weather, you’ll be offered a different date or a full refund
- This experience requires a minimum number of travelers. If it’s canceled because the minimum isn’t met, you’ll be offered a different date/experience or a full refund
- This tour/activity will have a maximum of 51 travelers

A designated UNESCO World Heritage Site, the history of 'The Tower' has been intertwined with the history of England for almost a thousand years. Originally built by William The Conqueror in 1066, it has served a number of functions during its long history, including a prison, luxury palace for royalty and even a zoo. The priceless crown jewels are also held within the castle walls, along with the largest collection of medieval armour and weaponry in the country. See all of this and hear more about the tower's bloody history on a comprehansive tour with an expert guide.

Changing of the Guard

Elite soldiers from the military have been guarding English Kings and Queens since 1660. Known as the 'Household Division', these regiments are so devoted to their duty that they will famously not acknowledge, nor allow themselves to be distracted by the public. During the ceremony, immaculately turned out guards are accompanied by marching bands playing a rousing mix of military and contemporary music in a display of the sort of pomp and military ceremony that has made the British military famous around the world.

Designed by the prolific British architect, Sir Christopher Wren, and taking 35 years to build, St Paul's Cathedral is an iconic symbol of London. One of the largest churches in the world, its dome is an incredible 366ft high and, inside the Whispering Gallery, it is said that a gentle whisper can be heard on the other side of the dome almost 112ft away. Explore the history behind this famous Cathedral and see the tomb of Lord Horatio Nelson, one of Britain's most revered icons.

Trafalgar Square is a public square in the City of Westminster, Central London, built around the area formerly known as Charing Cross. Its name commemorates the Battle of Trafalgar, a British naval victory in the Napoleonic Wars with France and Spain that took place on 21 October 1805 off the coast of Cape Trafalgar.

Parliament is made up of the House of Commons and House of Lords. It is responsible for making laws, deciding taxes and scrutinising the Government.

Big Ben is the nickname for the Great Bell of the clock at the north end of the Palace of Westminster in London and is usually extended to refer to both the clock and the clock tower.

From the Tower of London, hop aboard a Thames River Cruise to Westminster Pier to enjoy London from a different viewpoint. If you prefer, you can take the cruise any day before 31 March 2020.

Mansion House is the official residence of the Lord Mayor of London. It is a Grade I listed building. It is used for some of the City of London's official functions, including two annual white tie dinners.

Great history and facts provided for all ingesting spots, and there are a lot. Leslie was great, and very entertaining.

This was our favorite tour of our short stay in London. We were fortunate to have had the best guide ever. Deborah was so interesting and informed.. She was genuinely a pleasure to spend the day with and the long day passed quickly.

Anthony, our guide for the day, displayed incredible knowledge, professionalism, and true British humor. I say that with PEACE and LOVE. What a great day!

Our tour guide Trudy was very funny and informative. Her and our driver Harry made for a great experience

I was disappointed to find out that the changing of the guards is only available Mon-Wed-Fri. It doesn’t state that on the tickets sold. Other that, it was a beautiful tour.

This was a full day tour. Leslie was our tour guide. She kept us informed and on time all day. She positioned us in a great place to see the guards and the horses parade down the street to Buckingham Palace. The road was closed so they could march to the castle..band also played. We had the added experience of seeing Prince Charles whiz by just prior to the parade starting. Once on the grounds of Buckingham Palace, she put us in a strategically good place to watch the event. She also gave us tips on what to see or look for at the Tower of London and the Crown Jewel room. The cruise in the Thames was a good place to sit after a long day...oh...and we had a fabulous lunch at a pub on Trafalgar Square...The Admiralty..highly recommend that as well

Great way to see lots of London highlights. Allows you to see if you would like to go back and visit a site in depth. Be prepared for a long day.

The walking parts of the tour were excellent. The guide was very knowledgeable, friendly and upbeat. The points of interest along the bus route went by to fast to take pictures, especially if you happen to be on the wrong side of the bus.

Sheila was great. Too bad the weather wasn't. It poured and when you need to walk in the rain with a cane to the sites it really takes the fun out of it. The historical information was super. It's too bad there aren't ways to get closer to doors/gates/entrances. We dropped out at Tower of London because it was added outdoor activity before going inside. I was so soaked the joy was gone. Had it been a better weather day my tour would have been much better. Guess we did get the London weather experience and I was dressed for it

London in One Day Sightseeing Tour Including Tower of London, Changing of the Guard with Optional London Eye Upgrade

See London on a full-day sightseeing tour of the city, led by a guide. Hear the history of top London attractions like Westminster Abbey and Big Ben, and a guided tour of St Paul’s Cathedral. After the sightseeing tour, watch the Changing of the Guard Ceremony at Buckingham Palace and tour the Tower of London. As a bonus, this experience also includes a one-way River Thames sightseeing cruise, which can be used on the day or another time. Upgrade to include a flexible London Eye ticket to be used on any day you wish.