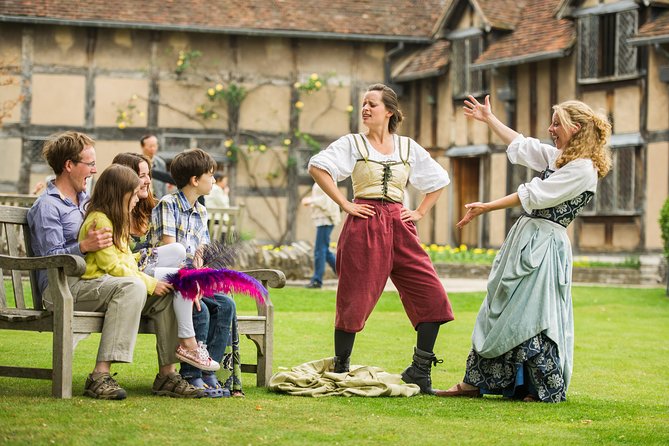 Discover over a thousand years of history at one of England’s most beautiful medieval castles before visiting the picturesque town of Stratford-upon-Avon, the birthplace of William Shakespeare. Finally, head off to explore the historic city of Oxford on a walking tour of the city with your expert guide.

- Confirmation will be received at time of booking
- Children under 16 years must be accompanied by an adult
- This experience requires good weather. If it’s canceled due to poor weather, you’ll be offered a different date or a full refund
- This experience requires a minimum number of travelers. If it’s canceled because the minimum isn’t met, you’ll be offered a different date/experience or a full refund
- This tour/activity will have a maximum of 51 travelers
- Face masks required for travelers in public areas
- Face masks required for guides in public areas
- Hand sanitizer available to travelers and staff
- Social distancing enforced throughout experience
- Regularly sanitized high-traffic areas
- Gear/equipment sanitized between use
- Transportation vehicles regularly sanitized
- Guides required to regularly wash hands
- Contactless payments for gratuities and add-ons
- Limited vehicle capacity empty seats left next to single travellers & odd numbered groups / Personal audio headsets provided to maintain distancing / Inclusions vetted to ensure they adhere to safety measures / E-tickets only no paper tickets / Staff newly trained in safety measures

Journey back 1,100 years to Medieval England with a visit to magnificent Warwick Castle. Rising high above the River Avon and set within 64 acres of rolling landscaped gardens, you will have the opportunity to explore the lavishly decorated State Rooms and 17th-century Great Hall; a room boasting an impressive collection of artefacts including suits of armour and medieval weapons. Bring the history of Warwick Castle to life at the Time Tower and enter the multi-sensory Kingmaker attraction to learn more about the famous historical figures that feature throughout the incredible history of Warwick Castle. Whilst there, why not enjoy a live display of typical medieval sports such as jousting and archery?

This ancient market town is perhaps most famous for being the birthplace of William Shakespeare, widely regarded to be the greatest writer in English literature and the world's greatest ever dramatist. You'll visit the 16th-century half-timbered house where Shakespeare was born in 1564 and grew up. Enjoy a fascinating insight into tales of his family life and admire rare artefacts on displays from the Shakespeare Trust's world-class collections.

Stratford-upon-Avon, a medieval market town in England’s West Midlands, is the 16th-century birthplace of William Shakespeare. Possibly the most famous writer in the English language, Shakespeare is known for his sonnets and plays such as 'Romeo and Juliet' and 'Hamlet'. The Royal Shakespeare Company performs his plays in the Royal Shakespeare Theatre and adjacent Swan Theatre on the banks of the River Avon.

Oxford, a city in central southern England, revolves around its prestigious university, established in the 12th century. The architecture of its 38 colleges in the city’s medieval center led poet Matthew Arnold to nickname it the 'City of Dreaming Spires'. University College and Magdalen College are off the High Street, which runs from Carfax Tower (with city views) to the Botanic Garden on the River Cherwell.

The Bodleian Library is the main research library of the University of Oxford, and is one of the oldest libraries in Europe. With over 12 million items, it is the second-largest library in Britain after the British Library.

In Christ Church college, you will be visiting one of the University's most prestigious colleges. Founded by Henry VIII in 1532, Christ Church also functions as the UK's smallest cathedral.

Its beautiful architecture has seen it featured in movies such as Harry Potter and The Golden Compass, while it has also inspired replicas around the world. The famous dining hall, for example, has been reproduced in Cornell University & the University of Chicago. The dining hall in all Harry Potter movies is modelled on the Christchurch dining hall!

Hertford Bridge, often called "the Bridge of Sighs", is a skyway joining two parts of Hertford College over New College Lane in Oxford, England. Its distinctive design makes it a city landmark.

Really great day trip highly recommend. Has something for everyone. Oxford is an interesting town as well

This was an excellent day-long bus tour to the Midlands. Warwick Castle is an eye opener as a genuine Norman castle. Stratford upon Avon us a delight and the focus on Shakespeare is both interesting and enlightening. Oxford is always a treat. The guide was both informative, interesting and very approachable. An accommodating driver added to the experience. A very worthwhile tour.

A great day in the English countryside with a well informed guide and experienced coach driver. The visit to Warwick castle was good. Great history. Oxford was good and the fact that the guide was a native was a treat. The Cotswalds were beautiful even on a dreary winter day.
Very good tour.

The day trip from London was a perfect combination of famous student city, nature, history and castle-building! With open eyes and ears I learnt a lot and got detailed answers to my questions; both the guide and the driver were really great and should earn 5 scores!

What an amazing day! From the bus ride which was beautiful to the tour guide who was entertaining and knowledgeable we loved it all! Warwick Castle was fun to explore and Stratford-upon-Avon was an adorable little town! Being in Shakespeare's birthplace was amazing! We loved driving through the gorgeous Cotswolds and Oxford was a great place to visit - so rich in history!

My husband and I took this tour on 12/7. It was very thorough and Monica our tour guide, and Paul, our driver were excellent. Long day but Monica never lost her enthusiasm.

My son and I enjoyed the trip very much, especially the visit to Warwick Castle and Stratford-upon-Avon.

This was a relatively small group of people. The guide and driver were very friendly and professional and the sites visited were very nice.

I felt the timing for visiting the places was poorly calculated.
We had plenty of time to explore Warwick Castle, to the extent that people gathered by the bus waiting for departure far in advance. However in Oxford i felt being hurried and we had maybe half an hour to explore.
Also, my headset was broken and the tour guide failed to replace it. Wgen I approached her to give it back, she said she was not to carry everyone's headsets.
On the bus on the way home the said tour guide went on a political rant about Boris Johnson being an idiot.
I didn't come to a political rally. I traveled from the US to visit English countryside.
That behavior of your tour guides is not acceptable.

Discover over a thousand years of history at one of England’s most beautiful medieval castles before visiting the picturesque town of Stratford-upon-Avon, the birthplace of William Shakespeare. Finally, head off to explore the historic city of Oxford on a walking tour of the city with your expert guide.