Stonehenge and Bath Day Trip from London with Stonehenge Entrance 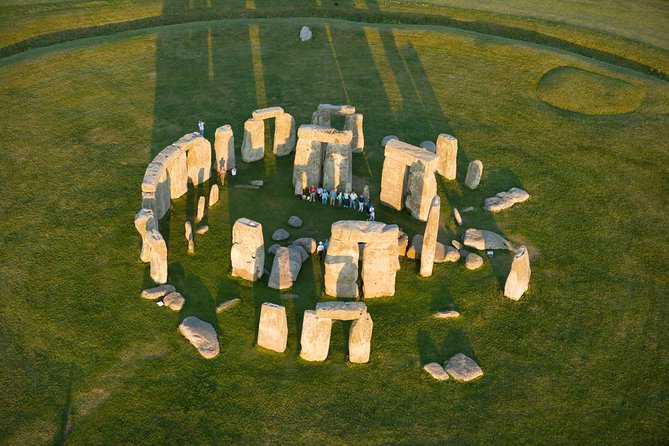 - Confirmation will be received at time of booking
- Children must be accompanied by an adult
- Comfortable walking shoes are recommended
- Please note: details and location order are subject to changes
- Not wheelchair accessible
- Stroller accessible
- Near public transportation
- Most travelers can participate
- This experience requires good weather. If it’s canceled due to poor weather, you’ll be offered a different date or a full refund
- This tour/activity will have a maximum of 49 travelers

After our London pickups, we will drive to Stonehenge where you will have almost 2 hours to explore this UNESCO World Heritage site.

The tour manager will provide you with a live commentary while on the way to the site and you will have access to audio guides in multiple languages at the site.

After your visit to Stonehenge, the coach will drive you to the city of Bath, where you will have time to explore the city.

You can also upgrade your day trip to include a visit to the Roman Baths, unique in the UK!

The bus was on time and pick up points are handy, Kelly is very informative about both sites and Desmond is such a great driver . Even if we had a few rain we still enjoyed very much the tour .

We enjoyed very much this trip. We had a very nice and comfortable bus. The visit went well. The guide , Tanya and the drive were very nice and knowledgeable.

I really enjoyed the information provided by the guides on comfortable bus ride. It was raining when we got to Stonehenge but the set up allowed for good clear viewing and a safe walk. Our bus driver Keith and tour guide Tess shared with us how to plan our time. Very nice . I never felt rushed.

Everything about this tour was wonderful. Our driver Greg was an excellent driver and our tour guide Jackie was extremely pleasant and accommodating. Beautiful sites! Bath was an amazing city with ancient Roman Baths and incredible architecture with scenic landscapes. There was an incredible selection of shoppes and cafes. Would love to spend a full weekend just in Bath! Stonehenge was truly a sight to behold! It can be time consuming waiting for the shuttle to carry you up to the stones, so I recommend walking up. There is plenty of beautiful landscape to take in. Truly serene. Highly recommended!

We really enjoyed our visit yo Bath and STONEHENGE yesterday with Anderson Tours.The coach was very comfortable and Peter our tour manager was excelkent

Excellent Customer Service. Very Friendly Tour Guide - Louise and Very Professional Driver - Brian
I would definitely recommend to my family and friends. I believe this is the best wast to see the tourist attractions in one day. We visited the Stonehenge and the City of Bath.

We are very happy from this trip everything was perfect. Thank you Viator we wait the next excursion

The day tour picked up passengers from a Central London location that was well-described so a person who had never been to Earl's Court could find where the bus stopped exactly. The Tour bus was clearly marked with the tour company name. The bus left only a few minutes late after giving up on trying to reach a single late registrant. So far so good. I felt they could have explained out the outset a little more clearly what the site at Stonehenge involved, in therms of just how far it the stones actually were from where the Tour bus lets us out and we get our tickets--quite far from there-- and the other sites at Stonehenge--which I did not make the time to investigate because of distances and the fact that the stone circle is the main event. The automated Audio guide they give you to wear around your neck when you get there seems to assume you have a couple hours or more to see all 6 exhibits that are distances apart, and you in fact don't have that time-- so you have to skip through the audio guide to find what's relevant and just get to the main stones. We had an hour and 25 minutes there total on our day, and given the time constraints of getting to Bath in Somerset the same day, it should be clearly stated that you will have to take an abbreviated tour of the Stonehenge complex, and it wasn't, so I took off one star from 5 for that. I wouldn't have minded if they were up front about it, perhaps more my style than theirs to be up front about these things.The time in Bath afterward was ample and that town is quite an enjoyable place. If the Roman bath ruins is your thing you'll have to focus on seeing mostly that and nearby things. Otherwise, don't miss the River Walk along the Avon's bank-- a mile or more alongside the river, accessible from the far side of the famous bridge on your tour map they give you..If you skip the Roman Baths inside--booking the "bargain tour" you will have lots more time to see all the sites the town has in its Georgian splendor.

Had a fab tour, dodged the weather, loved both destinations. Thanks!

Nice coach, nice staff :) I would use this tour company again

Entrance tickets didn't probide any benefit except for maybe quicker entering. But the time provided for Stonehenge was barely enough to walk along the path and then wait for the shuttle bus (get into fourth) and run to the tour bus. Checking on
visitor center, gift shop or caffe was not possible. Time in Bath was also tight. The bus was ok, would have liked it to be vacuumed before trip.

Stonehenge and Bath Day Trip from London with Stonehenge Entrance