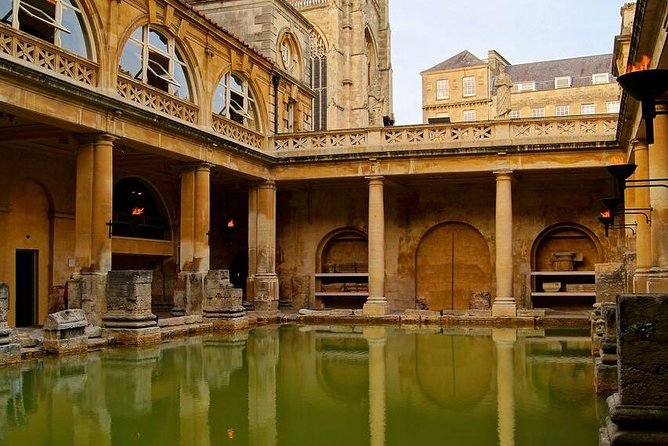 Sit back and relax as you travel by luxury air-conditioned coach from London to the UNESCO World Heritage-listed city of Bath. On your way, discover the iconic prehistoric stone formation of Stonehenge. Spend a full afternoon exploring Bath, and take advantage of the opportunity to see the ancient Roman Baths or the Jane Austen Visitor Centre.

- Confirmation will be received at time of booking
- Not wheelchair accessible
- Stroller accessible
- Near public transportation
- Infants must sit on laps
- Travelers should have a moderate physical fitness level
- Please note that Audio guides at Stonehenge are not available to hire due to current restrictions therefore customers are advised to download the official ‘Stonehenge Audio Tour’ app prior to the visit.
- This experience requires good weather. If it’s canceled due to poor weather, you’ll be offered a different date or a full refund
- This tour/activity will have a maximum of 75 travelers
- Face masks required for travelers in public areas
- Face masks required for guides in public areas
- Face masks provided for travelers
- Hand sanitizer available to travelers and staff
- Social distancing enforced throughout experience
- Regularly sanitized high-traffic areas
- Gear/equipment sanitized between use
- Transportation vehicles regularly sanitized
- Guides required to regularly wash hands
- Regular temperature checks for staff
- Temperature checks for travelers upon arrival
- Paid stay-at-home policy for staff with symptoms
- Contactless payments for gratuities and add-ons

The Jane Austen Centre is a permanent exhibition. Situated in an original Georgian townhouse, it tells the story of Jane’s time in Bath, including the effect that living here had on her and her writing.

The Royal Crescent is a row of 30 terraced houses laid out in a sweeping crescent in the city of Bath, England. Designed by the architect John Wood, the Younger and built between 1767 and 1774, it is among the greatest examples of Georgian architecture to be found in the United Kingdom.

Bath Abbey is an Anglican parish church and former Benedictine monastery in Bath, Somerset, England. Founded in the 7th century, it was reorganised in the 10th century and rebuilt in the 12th and 16th centuries.

Crossing the River Avon the bridge was completed by 1774, and connected the city with the land of the Pulteney family which they was designed by Robert Adam in a Palladian style, it is exceptional in having shops built across its full span on both sides.

The most famous prehistoric monument in the world, and now a world heritage site, Stonehenge stands alone in the vast empty tract of Salisbury plain. Its origins date back nearly 5,000 years and it has been home to pagan religion and spiritual worship, not to be mention public debate ever since.

Wonderful experience. Loved seeing Stonehenge and our guide giving such wonderful stories and history about England. He was so passionate about sharing little pieces of English life and history. Bath was beautiful and would highly recommend getting out of London and seeing how beautiful the rest of England is !!

Highlight of the trip. My guide, Carol, is an absolute treasure and I hope the company appreciates having her on the team. Incredibly informative and kind. Best guide I've had!!

Trip was great! Our guide Alan was very funny and knowledgeable. The sights were amazing as well. Would definitely recommend.

Gavin our tour guide was fun and incredibly knowledgeable!! Seeing Stonehenge and Bath were amazing!! Gavin even did a walking tour once we arrived in Bath so everyone could see the city and it was totally worth it!!

Very enjoyable day - Clive and Abdul were great! Extra info on the way, at sites, and on the return.

Clive was awesome...very informative and fun....the driver was great and prompt as well ...would go again!

By far my favorite part of my visit to the UK. I was looking for a Stonehenge visit, but immediately chose this tour when I saw it included Bath. Our guide, Gavin, was both entertaining and very informative with tremendous knowledge of this absolutely beautiful city.

Our tour guide Lisa was amazing - shared a lot of interesting facts and was really funny. 3-4 hours is the exact time you will need for Bath so it was great

Lovely day. Fortunately it was sunny, if windy and brisk, but the light on the Stones was amazing. Lisa (guide) and Abdul (driver) were terrific; pleasant, timely, did what they said they would. Stonehenge is amazing...why haven't all those scholars and archaeologists and anthropologists and historians figured out everything about the place? And Bath is charming with great pubs...reminded us of Bruges. We had the classic fish and chips at The Pig and Fiddle, and now are Butcombe ale fans.

I had to canceled my trip due to being ill. And with the health concerns going on in the world I thought I’d get a refund but they refused to. Very disappointed for their lack of understanding.

Sit back and relax as you travel by luxury air-conditioned coach from London to the UNESCO World Heritage-listed city of Bath. On your way, discover the iconic prehistoric stone formation of Stonehenge. Spend a full afternoon exploring Bath, and take advantage of the opportunity to see the ancient Roman Baths or the Jane Austen Visitor Centre.