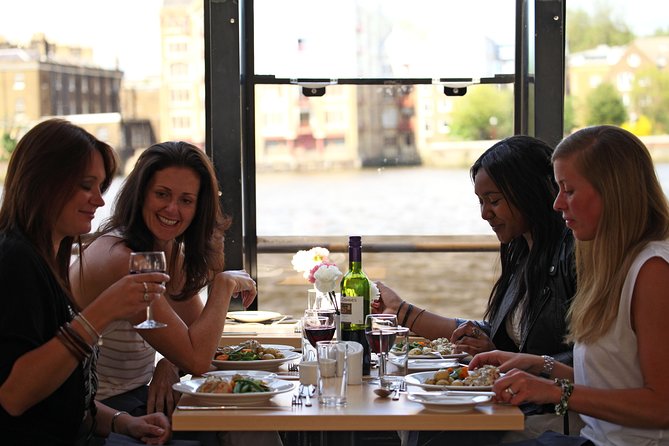 Combine London’s waterfront sights with a 2-course lunch during a 1.5-hour Thames River sightseeing cruise! While cruising between Tower Pier and Westminster, savor a 2-course lunch with tea or coffee and admire views of London landmarks from the water. Look out for the Shard, the London Eye, Big Ben and more, and purchase drinks from the onboard bar, if you wish.

- Confirmation will be received at time of booking
- Vegetarian option is available; if you require this, or have any other dietary needs, make a note in the 'Special Requirements' field when booking
- Your seat on board is guaranteed and will be allocated to you before the cruise takes place. When you board you will be shown to your table. Please note tables are fixed and within close proximity. Our panoramic windows provide great views from all angles of the passing sky-line, regardless of your table location.
- Not wheelchair accessible
- Stroller accessible
- Service animals allowed
- Near public transportation
- Infants must sit on laps
- We do not guarantee that products are free from nuts or traces of nuts. For gluten-free tea give at least 24 hours’ notice. For any special dietary requirements please contact us after booking.
- Most travelers can participate
- This experience requires a minimum number of travelers. If it’s canceled because the minimum isn’t met, you’ll be offered a different date/experience or a full refund

Head towards Westminster and take the opportunity to head to the upper deck to take a picture of Houses of Parliament.

Pass By: The View from The Shard, Joiner Street, London SE1 9QU England

board at at Tower Pier, please arrive 20 minutes before the departure time

Sail past the permanently moored former battleship, which is now a floating Royal Naval Museum.

Food was excellent. Staff is very friendly. Our first day in London, good way to start a vacation. I would definitely recommend.

Dear Viator,
we would just like to say how much we enjoyed ourselves on your Thames Lunch Cruise on the 22nd of Sep
The lunch was excellent, as was the service from your crew. We could not fault any part of our cruise. It was the Icing on the cake as far as our special day went.
Thank you again
From Peter and Sheila Bain

This was a 50th birthday celebration and couldn't have been better. Food was excellent, '50' confetti' on the table and birthday dessert presented with a candle. Staff were attentive but not overbearing. It was a little hot on board, I asked for the air con to be adjusted which was done so immediately. There was a commentary on the history/buildings along the river but this couldn't be heard due to the noise of the conversation and a slight engine noise, but it did not mar the experience. i would certainly do this again and recommend to anyone.

Good lunch and very good staff.
Visiting by boat during a lunch is a very good idea to complet to visit of London

When we eventually got to Tower Quay (having had a delayed rail journey from Gloucester to Paddington thanks to GWR and then finding the London Underground line we needed completely closed), my brother and I really enjoyed our lunch cruise. The food was delicious and the cold prosecco washed it down nicely! We were lucky enough to be right in the very front on a moving table and chairs rather than the fixed ones so had a great view as well. My only complaint was the commentary and the music that were far too loud and apparently uncontrollable!!

Please note this was a trip for family but not young children or teens but there isn't an option to select for that.

Very nice lunch, hard to hear the guided piece of the tour-felt that could be more improved. Provide more details on the sites seen from the boat.

Decided to take a river cruise. The lunch was very good and we had a beautiful day. It was very calm and peaceful

If you want a window seat, book very early! The food was good, we didn't get offered a drink for a long time, had to keep requesting. A couple with a young child were in the window seat, which meant there was no room for the highchair so they squeezed in the pram. The child screamed loudly while the parents enjoyed their meal. If there are young children they should be offered an area where they can fit the facilities the child needs. Wouldn't do it again. Shame as it could have been very good.

Combine London’s waterfront sights with a 2-course lunch during a 1.5-hour Thames River sightseeing cruise! While cruising between Tower Pier and Westminster, savor a 2-course lunch with tea or coffee and admire views of London landmarks from the water. Look out for the Shard, the London Eye, Big Ben and more, and purchase drinks from the onboard bar, if you wish.

London Royal Sightseeing Tour with Changing of the Guard

Dublin Independent 4-Day Tour from London by Rail and Sea