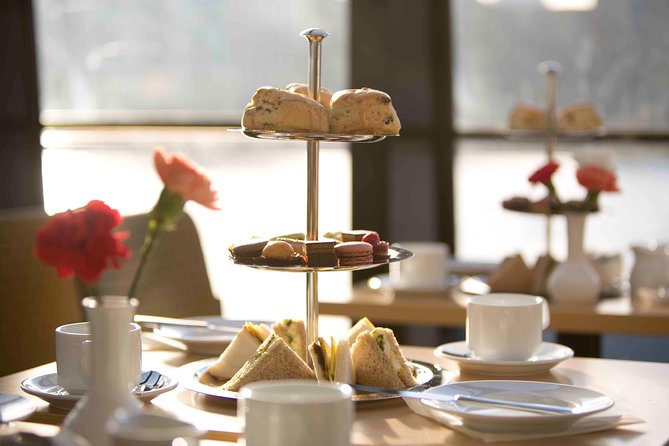 Take afternoon tea on the Thames during a 1.5-hour river sightseeing cruise in London. While enjoying the oh-so-British tradition of tea with cakes and sandwiches, cruise through the heart of central London on a round-trip route from Tower Pier to Westminster to see several of the city’s best-known sights. Gaze out at the London Eye, Big Ben, the Houses of Parliament and more!

- Confirmation will be received at time of booking
- Your seat on board is guaranteed and will be allocated to you before the cruise takes place. When you board you will be shown to your table. Please note tables are fixed and within close proximity. Our panoramic windows provide great views from all angles of the passing sky-line, regardless of your table location.
- Not wheelchair accessible
- Service animals allowed
- Near public transportation
- Infants must sit on laps
- We do not guarantee that products are free from nuts or traces of nuts. For gluten-free tea give at least 24 hours’ notice. For any special dietary requirements please call us after booking.
- Most travelers can participate
- This experience requires good weather. If it’s canceled due to poor weather, you’ll be offered a different date or a full refund

Board at Tower Pier, please arrive 20 minutes before you departure time

Sail past the permanently moored former battleship, which is now a floating Royal Naval Museum

Just such a great way to see London from a different perspective. Food was fantastic as well as the staff. Recommend this tour.

Overall the trip was amazing...the distance covered on the cruise really puts you in front of several iconic pieces of architecture all over London, and the ride was very smooth. Food and drinks were excellent as well, and the staff were all very friendly and accommodating. I would definitely make this trip again!

I enjoyed the beautiful views and the delicious foods. The service was great. The loudspeakers could have been a little louder to hear better, otherwise attn enjoyable ride.

My brother and I really enjoyed this afternoon tea cruise. We made it on time to the cruise and the staff were very helpful and welcoming at the pier and on the boat as well. The afternoon tea/coffee, sandwiches, scones, and sweets were all tasty! The views from the boat were also lovely. I would highly recommend this for anyone with a free afternoon in London!

Had a lovely time. One of the highlights of our trip to London. Delectable treats, and great memories were made.

Pleasant cruise around the Thames. Organized boarding and attentive staff. Well worth the price. I highly recommend the cruise.

It's a very nice cruise to take if you want just a laid back and have tea in a boat. Very nice service.

This was a lovely afternoon Tea on the Thames. Food was very good and plentiful. No fault of the tour operator, but the rain and condensation inside made it hard to see out the windows for the view.

There was no commentary at all on this tour!
It went dark at about 3.45pm so it wasn’t so easy to see outside and even soft drinks were not included and we were charged extra!
The hop on hop off buses also include river cruises the only difference is this one had afternoon tea.. but for what you get the value is not very good at all.

Take afternoon tea on the Thames during a 1.5-hour river sightseeing cruise in London. While enjoying the oh-so-British tradition of tea with cakes and sandwiches, cruise through the heart of central London on a round-trip route from Tower Pier to Westminster to see several of the city’s best-known sights. Gaze out at the London Eye, Big Ben, the Houses of Parliament and more!

London Royal Sightseeing Tour with Changing of the Guard