Transfer to the Cruise ports from your London accommodation 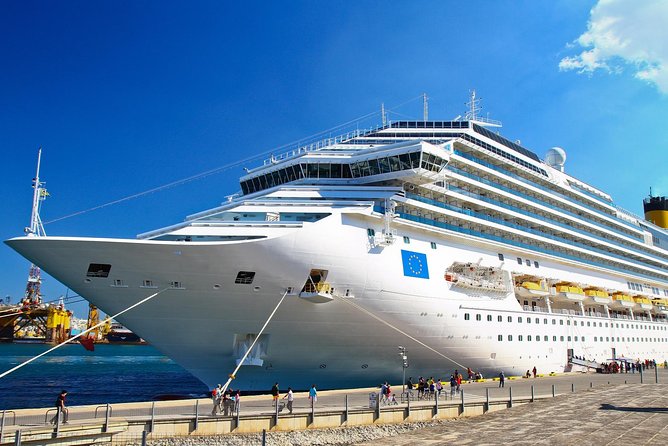 Make your transfer from London Hotel/Accommodation to Cruise Port simple and easy.

This shared transfer will take you to your check inn cruise terminal of your choice.
• Southampton
• Dover
• Harwich
• Tilbury

Driver or assistant will meet you at the hotel Lobby, driver will assist you with your luggage as you relax comfortably in the vehicle. Arrive at the cruise Port of your choice in a timely manner and board your cruise.
• Transfers operate 24 hours, 7 days a week
• Comfortable ride to your destination.
• Driver will also help you with your luggage.
• Smart Drivers

- Confirmation will be received at time of booking
- Not wheelchair accessible
- This shared transfer will take you to your check inn cruise terminal of your choice.
- The duration of transfers are approximate, the exact duration will depend on the time of day and traffic conditions
- Each traveler is allowed a maximum of 1x Large suitcase + 1x hand luggage per person, if you require extra luggage please let us know in advance. Oversized or excessive luggage (e.g. surfboards, golf clubs or bikes) may have certain restrictions, please inquire with the operator prior to travel to confirm if your excess luggage is acceptable
- Infant seats available
- Most travelers can participate
- This tour/activity will have a maximum of 15 travelers

Our driver or Assistant will meet you at some selected pick up point.

They will be holding a sign with the lead traveler's name on it. The driver will then assist you with your luggage and load it into the awaiting vehicle, the vehicle in no more than 3 years old. Sufficient time will be allowed for pick up other passengers and any traffic delay so you are always on time for your cruise boarding.

Admire the England countryside as you cruise along the roads. Arrive at your destination, cruise port in a timely manner. The driver will once more assist you with your luggage and bid you farewell as you board your cruise ship.

Our driver will pick up passenger from any London Hotel, please advise hotel name and full address, also confirm with supplier the correct pick up time for your transfer.

Arrived at airport on time. Our driver Manuel was waiting for us. On the way to the hotel Manuel was telling us the tourist attractions in London which was very helpful.

Great experience and enjoyable ride to our Cruise Port . Great communication with company . Professional driver who handled all our luggage . Small group on a medium size bus made the ride very comfortable . Appreciated the comfort stop on the way. Would highly recommend this company

The driver came earlier than the appointed time to pick us up which made the process of loading our luggage less stressful. She also cane in a Mercedes sedan which we were not expecting. The ride was smooth and relaxing and the driver even accommodated a request to do a roadside service stop. We got to our cruise port with plenty of time to spare for our embarkation.

on time pickup van/ transfer to bus /long wait/ bus ride to port excellent/we were not informed that we would be taking two different rides wait was wrong!

Transfer arrived earlier than advised but not concerned as it is better to be early. Issue for us and why not 5 star was that it was a full transfer and as such a lot of luggage and limited space. All over a good service and would recommend

I was satisfied with the transfer. It cost more but it is very convenient and easy on yourself. You get picked up from your hotel and then they drive you directly to the port luggage area and you just drop off your baggages. So much better than taking a taxi to the train or bus, taking the bus or train and then getting another taxi to the ship itself. Imagine doing that with 2 large and 2 handcarried luggages. The fares adds up and in the end it is not much difference and you will be in better mood going on your cruise.

Smooth transfer. Could use more up front communication on pick up timing to assure things can be planned out ahead of time.

I paid for a private transfer from my. London Hotel to Southampton Cruise Port for 7 adults but ended up having a big bus come and take us to the cruise port. The ride was alright except that I paid extra for the private transfer for seven people.

Hello,
We were told we would be oicked up from ou hotel at 9:00 AM.
We waited until 9:20 to call about our ride because it wasn't at our hotel.
I was told he was out front waiting for us,this was not the case.
Then we were told he would be there soon.25 Minutes later a van showed up.
The driver told us we would be picking up another couple.So we go to another hotel.The people aren't ready because they were told that they would be picked up at 11:00 o'clock.
So we are waiting for this couple.They cam out at 10:45 .
Now the driver tells us he isn't taking us to Southhampton.
He's taking us to a bigger bus that will take us to the cruise terminal.
We board the big bus at 11:00 O'clock.
Now the driver of the bus tells us he is waiting for more people.
We finally leave for Southampton at 12:15.
We get to the cruise terminal at 1:59.
So a one hour and 40 minute trip took us about five hours.
This is how our vacation started.

Driver was 1 hr late picking us up. Spent 4 hrs in bus without bathroom and almost missed cruise ship.

Transfer to the Cruise ports from your London accommodation

Make your transfer from London Hotel/Accommodation to Cruise Port simple and easy.

This shared transfer will take you to your check inn cruise terminal of your choice.
• Southampton
• Dover
• Harwich
• Tilbury

Driver or assistant will meet you at the hotel Lobby, driver will assist you with your luggage as you relax comfortably in the vehicle. Arrive at the cruise Port of your choice in a timely manner and board your cruise.
• Transfers operate 24 hours, 7 days a week
• Comfortable ride to your destination.
• Driver will also help you with your luggage.
• Smart Drivers

Private Round Trip between London Airports and your Hotel, Smooth Arrival and Departure Transfer