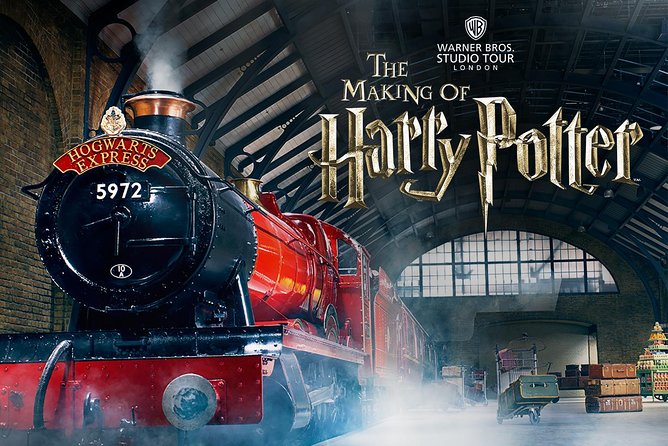 Step into the mystical world of Harry Potter™ with a behind-the-scenes visit to Warner Bros. Studio London. With luxury round-trip transport from London Victoria to the north London studios included, this 7-hour experience enables you to discover the magic of the Harry Potter films without any hassle. After a relaxing journey, explore film sets like the Ministry of Magic and Diagon Alley, and see incredible costumes, props and more. You’ll also be able to pose for photos at Platform 9 ¾ and stand next to the original ‘Hogwarts Express.’

Evan Evans Tours is the oldest and largest sightseeing company in London and has been accompanying visitors on city tours and out-of-town excursions since 1930.

Evan Evans Tours is owned by The Travel Corporation of 25 highly successful travel and tourism companies including Trafalgar Tours, Insight Vacations, Contiki Holidays and Red Carnation Hotels. The Travel Corporation is committed to maintaining the highest standards of quality and guest service and this this follows for each individual brand.

Step onto the breathtaking sets and take a glimpse behind the scenes of everyone’s favourite wizard from the Harry Potter films on this spectacular Harry Potter studio tour.

Walk through the doors of the Great Hall into the dining room, where the Sorting Hat famously sorted Hogwarts students into their houses. Can you find all of the golden snitches hidden in the set? Peer into the Gryffindor common room, Snape’s lab and the office of Professor Albus Dumbledore before making your way to the Forbidden Forest, where you’ll encounter a full-size model of Buckbeak and meet face-to-face with the giant spider, Aragog.

Marvel at how the SFX team at Warner Bros. created some of the movies’ scariest characters, including an animatronic foetal Lord Voldemort, and visit Privet Drive; home of Harry’s dreadful aunt and uncle, the Dursleys. In the costume section, see up close in incredible detail the wardrobes of characters such as Hermione Granger, Ron Weasley and the students of Beauxbatons Academy of Magic.

Enter the set of Gringotts Wizarding Bank from 06 April 2019

Lined by towering marble pillars, the grand banking hall will be decorated with three magnificent crystal chandeliers and finished with real brass leaf. Inkwells, quills, ledgers and piles of Galleons, Sickles and Knuts will complete the goblin tellers’ desks as seen on screen. The Prop-making Department, led by Pierre Bohanna, created over 210,000 coins for the final two films alone.

Gringotts Wizarding Bank is famously run by goblins. Walking through the imposing marble columns, you will discover costumes and prosthetics belonging to Bogrod, Griphook and many other goblin bankers.

Once through the banking hall of Gringotts, you will enter the depths of the Lestrange vault used to store the treasures of Bellatrix Lestrange including the Sword of Gryffindor and Helga Hufflepuff’s Cup, one of Voldemort’s many Horcruxes. During filming 38,000 pieces of rubberised treasure were created the for the Lestrange vault including 7,014 Hufflepuff Cups. Here, you can have a unique photo opportunity allowing you to step inside the Lestrange vault and surround yourselves with treasure.

No visit would be complete without visiting Platform 9 ¾, and on this tour you’ll have a chance to snap a photo with the trolley on your way to catch the Hogwarts Express.

Easy to locate the place where the coach is. However long queue to exchange voucher for the real tickets. Once ticket has been exchanged, able to board the bus immediately and once the bus is filled, then off to our destination. Bus driver was approachable and friendly. Time given to explore HP WB studios is plentiful. Definitely a good experience, for those travelling with families. Take note, this trip, take at least half of your day as the travelling time heading to and fro is impeded by the bad congestion in London. So it's best not to make any bookings/appointments for delays are to be expected. The HP WB was excellent, eye-catching and amazing props leaves you with lovely memories.

Absolutely fantastic tour. Brilliantly organized and so interesting. Highly recommended for a great day out

Great tour for Harry Potters’s Fan. Amazing set that was used in the movie. Lots of fun facts and places to take pictures. A chance to ride nimbus 2000 and make your own video. Overall good experience and helpful staff readily to help.

Well organized tour by Evan and Evans Tour company in London. The studio tour time of 4 hours is quite long, maybe visitors should be offered shorter visit times and return options back to London. Overall, quite a delightful experience for Harry Potter buffs!

The studio and tour was fantastic for those who are Harry Potter fans. The props, costumes, special effects, and concert art were all incredible. Many children dressed up which made the tour more fun. We were allowed to take our own food which worked out better for us because the food line wait was long although we had to get butter beer. Would highly recommend this tour for Harry Potter fans.

We are a couple from New Zealand travelling around Europe. We were staying in the heart of London and needed a way to get to the Harry Potter Studios. Evan Evans tours was a great option as it took us from the city directly to the attraction and back in a tidy air conditioned coach. Works out a little more expensive as compare to taking public transport - but this option is hassle free and you can focus on enjoying the day.

Well worth the visit and loved every minute of it!
Was definitely convenient having round trip transfer from central London to the studio! Made it a lot easier.
Highly recommend

The fantastic world of Harry Potter. The must!!! I'd love the opportunity to see the scenes about the films.

My husband and I had a great time. I just wish it was more clear that the 10:30 AM time we selected was a check in time. I would say the only downfall is that you only get 4 hours to explore, we knew that going in so we by passed some things. I would recommend if possible they add at least an hour or 2 to time at Warner Brothers. If you are a fan , it's a MUST.

Really really enjoyed it! It’s done up so well the only disappointment was the fact that we did the broom video after being in the line for 40 min than when we went to purchase it they told us they they had some problems and that the video didn’t save. This was also after waiting another 10 min in the line to view the video and the photos

Step into the mystical world of Harry Potter™ with a behind-the-scenes visit to Warner Bros. Studio London. With luxury round-trip transport from London Victoria to the north London studios included, this 7-hour experience enables you to discover the magic of the Harry Potter films without any hassle. After a relaxing journey, explore film sets like the Ministry of Magic and Diagon Alley, and see incredible costumes, props and more. You’ll also be able to pose for photos at Platform 9 ¾ and stand next to the original ‘Hogwarts Express.’